Dinner parties that celebrate holidays are fun, but celebrating the odd holidays is even more fun.  Groundhog day, February 2nd, is no exception.  I just love every year when the movie Groundhog Day with Bill Murray is played (over and over) on the television. This is why, in 2009, I decided to theme my dinner around this holiday. I kept it simple...

Invitation:  Burn a CD with I Got You Babe by Sonny and Cher.  This is the song that is played on the radio each morning when Phil wakes up in the movie.  If you are good with editing, you can even add in the weather broadcast just like the movie.  Create a cover of the CD with all your party details. Or, instead of a weather broadcast, record yourself giving the party details as the music fades.  You can even make several tracks of the same song, so the CD is full of I Got You Babe!  I also asked guests to dress in Groundhog Day colors -- green and white. 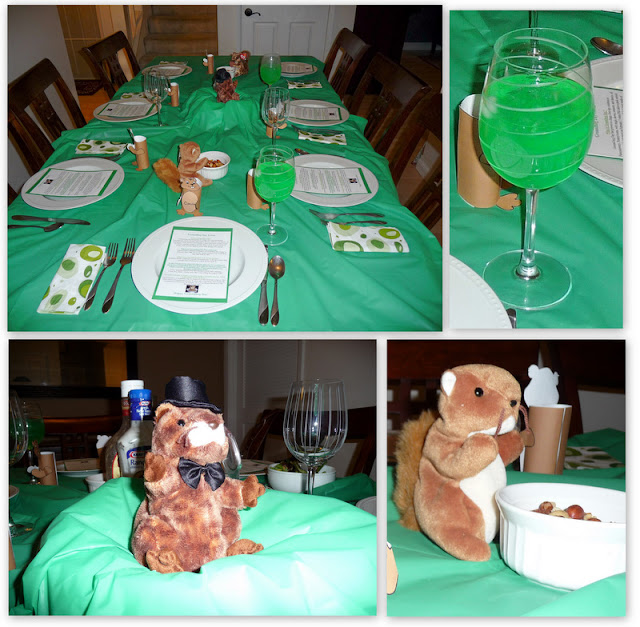 Decor:  I bought an inexpensive bright green plastic tablecloth, and created a burrow underneath it in the center with a towel.  I placed a groundhog beanie baby on top as if he just came out of the burrow.  I also used two other groundhogs/squirrels on the table next to bowls of mixed nuts.  I served green punch to keep up the color scheme. I also had the movie playing in the background. 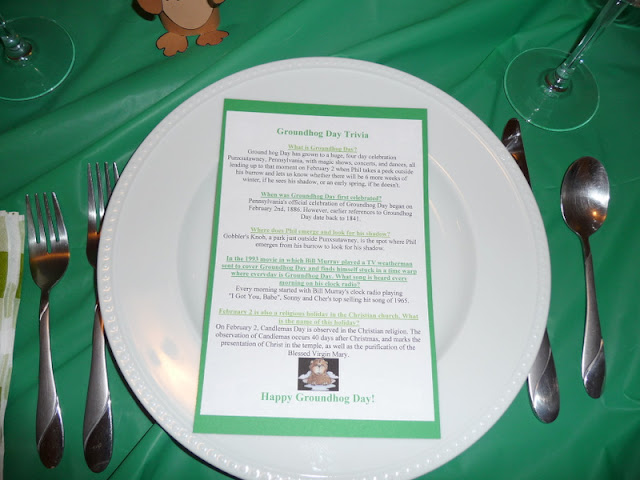 At each place setting, I included a card with trivia about Groundhog Day.  I was initially going to create a game with it, but decided to stick with just an information page.


For my place card, I used a simple craft for kids that I found online on DLTK.  Go to this link for all the directions as well as the template for cutting out the pieces.  I followed the directions and just added each guest's name on the belly of the groundhog.  Even if you are not throwing a party, this is a super cute and easy craft for kids to celebrate Groundhog Day.

Menu:  For my dinner menu, I tried to choose all green or nut-related items.  I also served the appetizer both at the beginning AND the end since Groundhog Day repeats itself!!

For dessert, I made these groundhog cupcakes which were a huge hit!!  Here is the recipe I found online.  I  only made one change to the recipe for my groundhogs.  I did not use jelly beans or watermelon candy. I just used decorator's frosting in white and pink.  This worked fine for me.

Groundhog Cupcakes
Cupcake Mix
Almond Joy candy bars
Chocolate wafer cookies
Remove a piece of cake the width of an Almond Joy candy from the center of a baked cupcake. Spread a layer of white frosting on the cupcake,
and then set the candy upright in the hole.  For the groundhog's eyes, trim the ends from a white jelly bean, stick them in place with frosting, then dot them with black decorators' gel. Add a tiny triangle cut from a watermelon slice candy for a nose, brown M&M Minis for ears and cheeks, and a tiny rectangular piece of white jelly bean for teeth. Sprinkle chocolate cookie crumbs around the partially emerged groundhog, and he's ready to greet his fans.

This is a super easy theme if you are looking to host a party near February 2nd.  Have fun!

Posted by InviteandDelight at 4:05 PM