A Taste of London

With the Olympic games taking place in London this year, I thought I would post a past party I did with a London theme (for other Olympic ideas see Going for the Gold post).  This monthly dinner fell on my friend's birthday, and she didn't want me to change the date, so I chose a theme that would match her. She studied abroad in London, visited again with her husband, and loves a local British restaurant, The Olde Ship in Fullerton.  Hence...A Taste of London dinner.

Invite:  I found an image on Google for a staycation party and recreated it for my invite. If your guests live close, place this by their front door attached to a British beer or cup of tea and crumpets for added fun!  If you are hosting an Olympic party this year, check out this invitation from The Party Hostess... 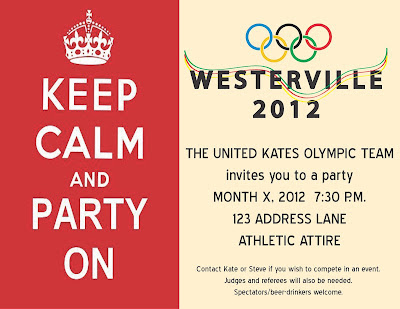 Decor:   I started with British flags outside my door along with a sign on my door that read "Casto Pub".  Inside I continued with the red, white, and navy decor. 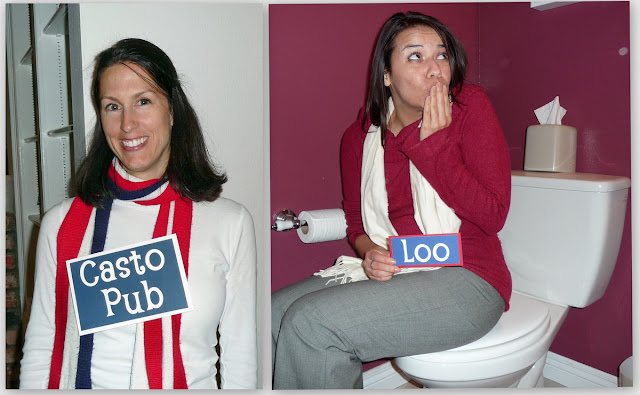 I created a sign for my bathroom door that read "Loo".  We had a bit of fun with these signs after the party! 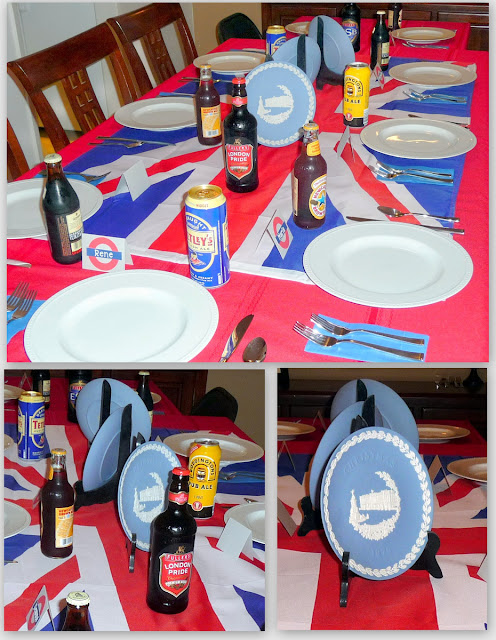 I set my table with a red tablecloth and a large (3x5 foot) British flag I purchased for $10 on Amazon. (I still have this if anyone needs it).  I borrowed Christmas china from England from a British family friend to use as my centerpiece.  I also purchased British beers and placed them at each place setting. 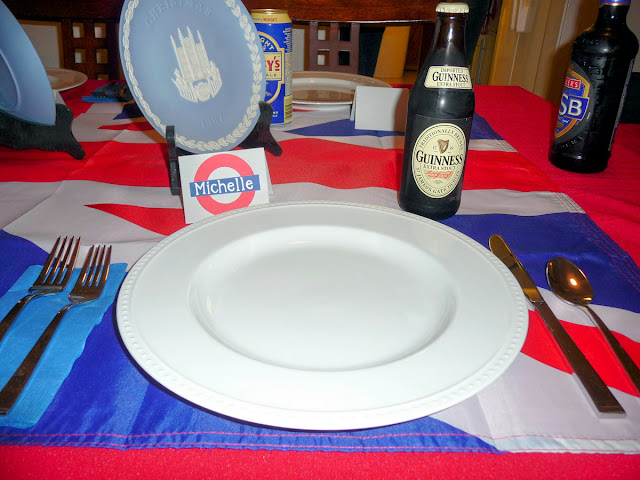 As a place card, I created standup cards of the Underground symbol used for the Tube in England.  Instead of the word "Underground" I had the guest's name.

Menu:  Of course, I wanted to serve British food, so I made a trip to a local store called The British Grocer.  They were super friendly, and helped me craft a menu and get the ingredients I needed.

I bought these pre-made at the British Grocer, but there are recipes online as well.

Preheat oven to 400 degrees.  Fry the ground beef and onion in a large pan until well browned.  Drain off excess fat.  Mix contents of packet with the water, stir into mince with sliced carrots and peas.  Bring to a boil, stirring, then transfer to an ovenproof dish. Spoon the mashed potato over the meat and bake in oven for 30 minutes or until potato turns golden brown.  Serves 4 according to packet.

Dessert: Mince Pie with Pudding
I bought individual mince pies from the British Grocer.  I heated these up and served them on a plate with vanilla pudding (or custard if you want) and whipped cream. 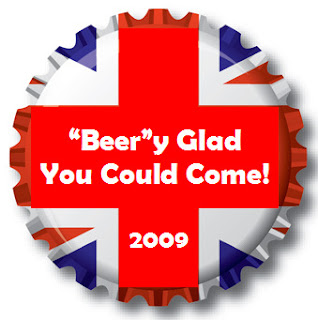 Favor: I created these silly bottle cap tags and affixed them to brown paper bags with red ribbon to hold the favor.  Each guest was given one of the British beers from my table setting to place in the bag to take home.

Even if you never throw a British-themed party, try out the Shepherd's Pie recipe.  It was delicious, and I have made it several times since for my family.  It is always a big hit.  Thanks for stopping by!!

Posted by InviteandDelight at 2:26 PM

I LOVE this party idea. I'm a wholehearted Anglophile so it definitely speaks to me. Well done you!