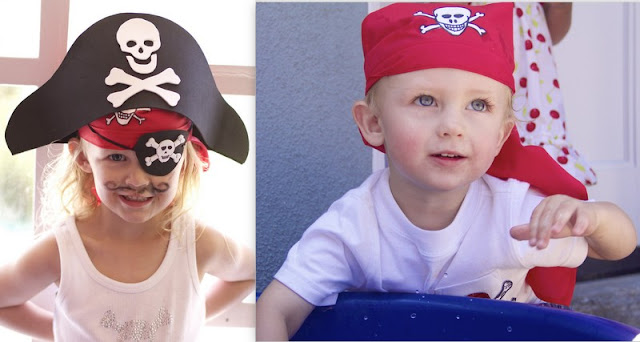 Seeing how my kids are a 2-year age difference and their birthdays are only 3 weeks apart, this year I decided to combine their birthday parties.  Lucky for me, they are both excited about pirates currently.  My daughter always wants to watch the Disney pirate show on television, and my son loves to walk around telling everyone "Arrgh Matey" with his fist pumping in the air.  Both were excited when we talked about this as their birthday party theme. 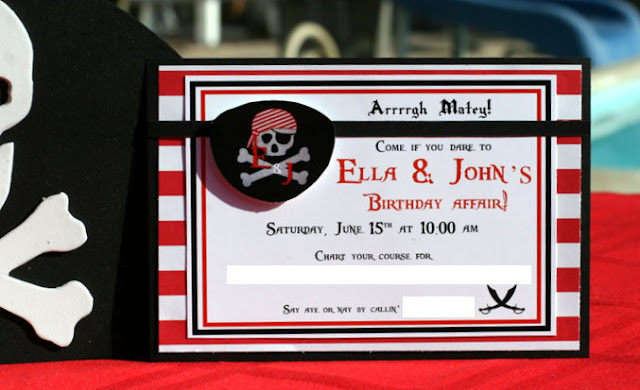 Invite:  I found some red and white striped scrapbook paper at Michaels which went perfectly with this theme.  I typed the party details using two free pirate fonts I found on the internet - Pieces of Eight is the majority of text, and Rapscallion is the Arrgh Matey font.  One of my students designed the pirate patch for me on Photoshop. She found the skull and crossbones, and then just added my children's initials to the image.  I used card stock for the invite and elevated the patch with a small piece of double-sided scrapbook foam. *Note: This 3D addition did cause the post office to charge me a little more to mail them. 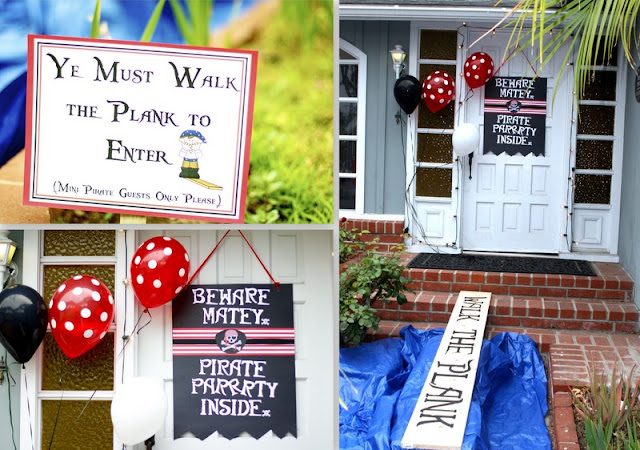 Entry Decor:  I bought a long piece of plywood and wrote on it with Sharpie for guests to "Walk the Plank" before entering. I put a couple of crates until the wood for added support, and the blue tarp was my pretend water.  The simple sign on the door welcomed guests to The Pirate PARRty.  The kids LOVED walking the plank...this is an easy activity and a must-have for any pirate party as the kids had a blast. 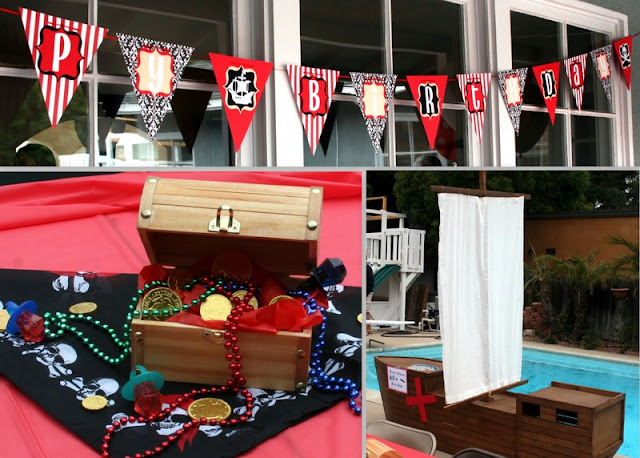 Decor:  I kept things simple with red tablecloths, black/white napkins, and red/black plates and cups. My centerpieces for each table were wooden treasure boxes I found at Michaels with goodies inside. I used wood stain for each box, then set it on top of a pirate bandana (Oriental Trading Company), and filled it with red tissue paper, beaded necklaces (Dollar Tree) chocolate gold coins (Party City), and Ring Pops (Dollar Tree).  Some of the coins melted since the party was outdoors, but no big deal. I made the Happy Birthday banner with card stock and my Cricut machine.  Loved how it turned out.
I borrowed this amazing boat from a friend of mine to add a ship to the party.  Her husband made it, and it was a cute addition to the theme. 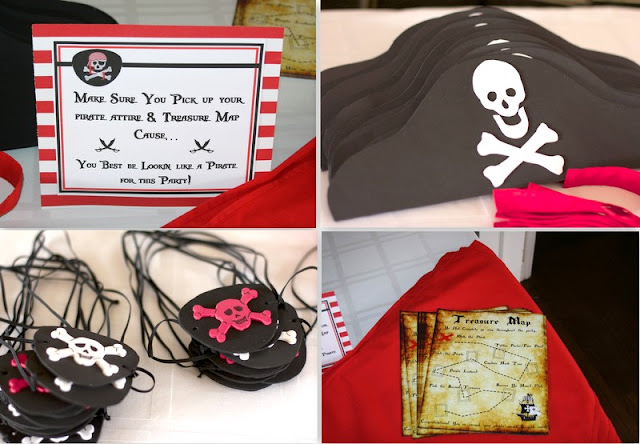 Activities: Upon entering, the kids received their pirate attire and Treasure Map.  I made the pirate hats and patches using black foam from Michaels.  You can get two hat fronts out of each piece.  The hat front and strip on the back were attached with hot glue.  I cut the white skulls out of white foam board that already had the sticky back. I bought a Pirate foam sticker pack from Michaels, picked out the skull/crossbones and used theses for the front of the patches.  Then just hole punched the foam and tied black elastic to complete the patch. 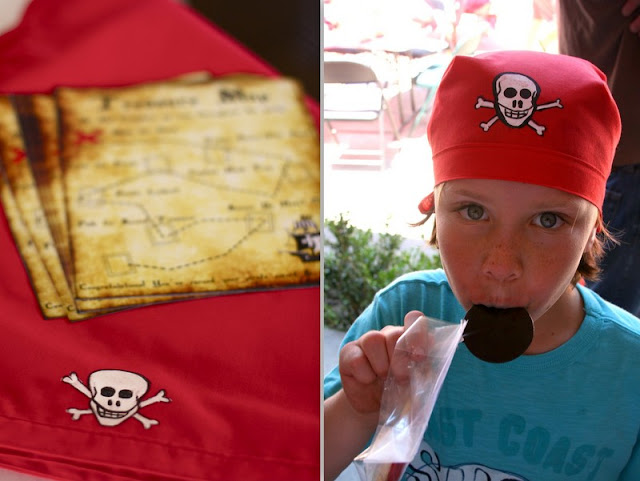 My mom also made these super cute head scarves for each guest.  To add more "pirate" to the plain red fabric, a friend of mine drew a skull and crossbones on the front with white paint and fabric markers. 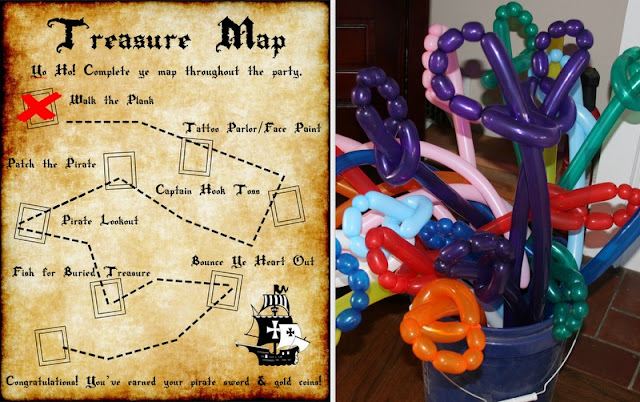 I created the Treasure Map using Microsoft Word.  Besides the Patch the Pirate game, kids could just play throughout the party and didn't really have to go in this order or need organized supervision.  This was nice because it allowed the party to have freedom and kids could do what they wanted, whenever they wanted.  When the kids finished their Treasure Maps, they received their pirate sword and gold coins. Since my kids are so young, I didn't want plastic swords, so I decided to make swords out of balloons (video found on youtube).  The coins were just chocolate coins. 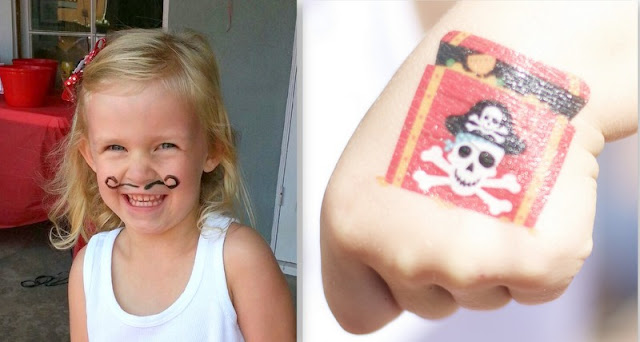 One activity was the Tattoo Parlor and Face Painting station. I bought pirate-themed tattoos from Party City, and one of my friends offered to put mustaches on kids with black makeup.  Easy and fun. 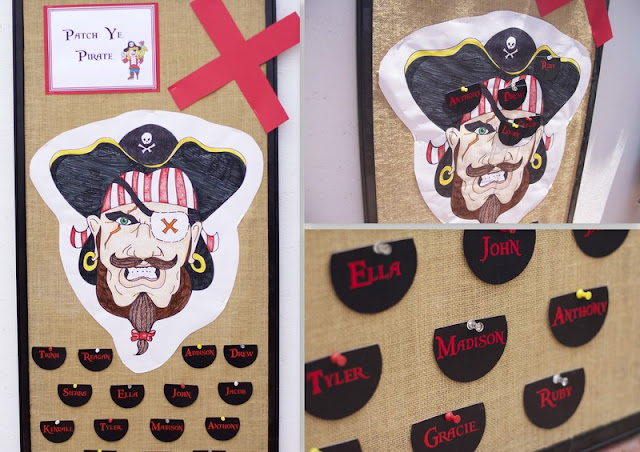 Patch the Pirate was one activity we did as a group.  I found the pirate image on Google and traced it onto butcher paper.  I made patches with each child's name on it and they used the pirate hats they were already wearing as blindfolds. 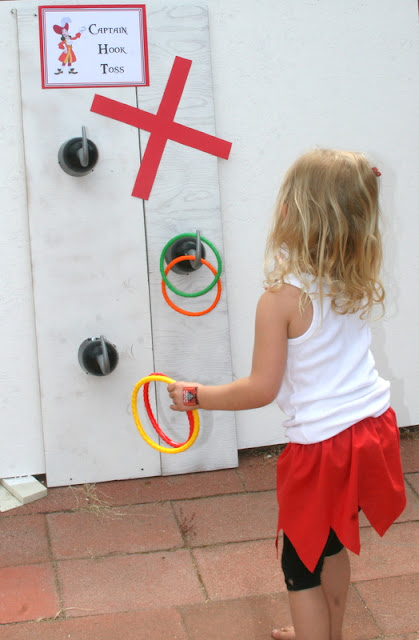 Activity #3 was the Captain Hook Toss.  I bought 3 pirate hooks from Party City, and my husband screwed them into a plank of wood we painted white. The kids tossed pool rings to see how many they could make onto the hooks.  Since my kids are only 2 and 4, I did not set a specific line to throw from.  I just let them go. 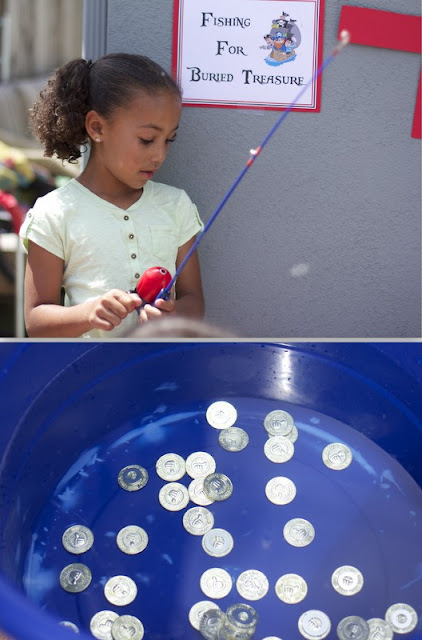 Activity #4 was Fishing for Buried Treasure.  I bought fishing poles for $5 from Walmart and attached large magnets to the ends.  The kids fished plastic coins with washers glued to them out of a small pool. 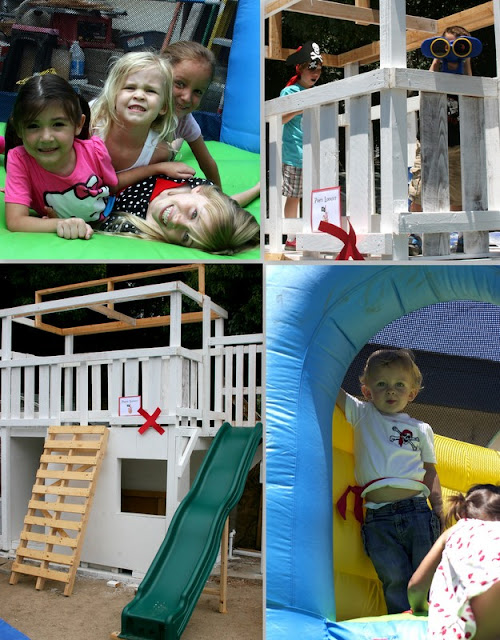 The other two stations on the Treasure Map were the Pirate Lookout and Bounce Ye Heart Out.  This was just the fort my husband has been building for the kids and a small bounce house we borrowed from friends. 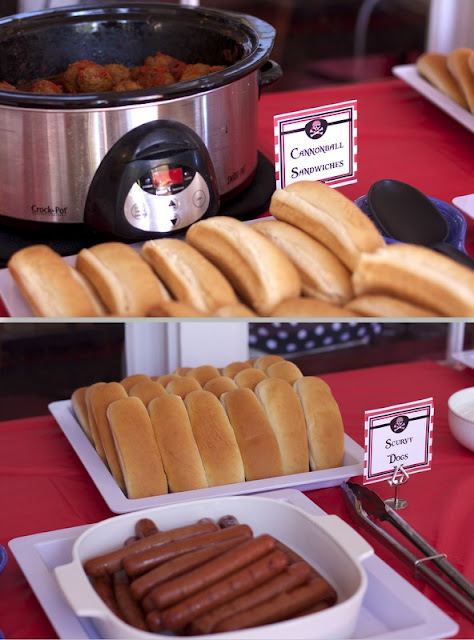 Menu: I chose an easy menu and just thought of pirate names for things.  For the adults, I served meatball sandwiches out of a crock pot and called them Cannonball Sandwiches.  This was honestly just frozen Costco meatballs and spaghetti sauce with a few extra spices that I put in the crock pot that morning.  For the kids, it was hotdogs in buns which I called Scurvy Dogs. 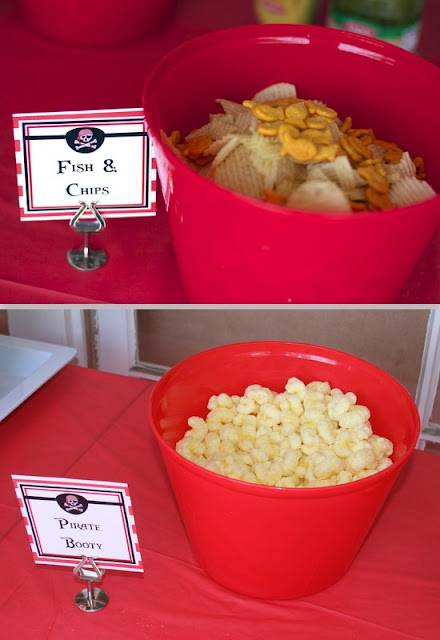 I served Fish and Chips and Pirate's Booty for chip selections. 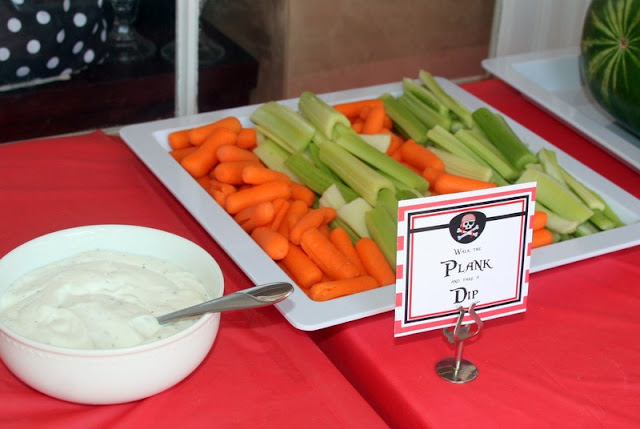 The vegetable platter was "planks" of celery and carrots of course to be "dipped" in ranch dip. 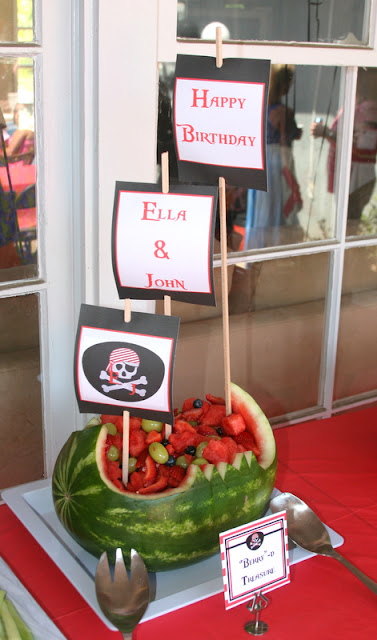 I cut a watermelon to look like a pirate ship, hollowed it out, and served the fruit salad in it.  I tried to include a lot of berries so that I could call this the Ship with "Berry"-d Treasure.  I also made some masts using a dowel pole and sails I created on the computer. 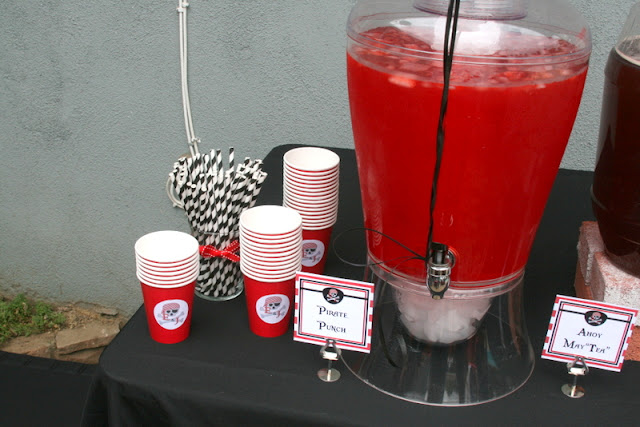 For drinks, I served Kool-Aid and iced tea which I called Pirate Punch and Ahoy May"Tea".  We also had soda and alcohol in a cooler for adults.  I added the party logo to the cups by printing the logos on Avery Name Tag Label stickers and then using my circle punch to cut them out. 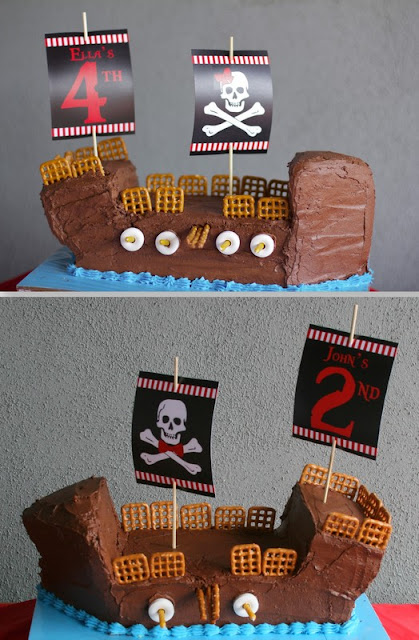 The Cake:  I love the pirate ship cakes I made for my kids.  Each one is a 9x13 cake cut and layered to make the pirate ship.  Square pretzels, stick pretzels, and Lifesaver mints were used for the added touches. I placed the candles coming out of the portholes. Again, I created the masts on Microsoft Word. 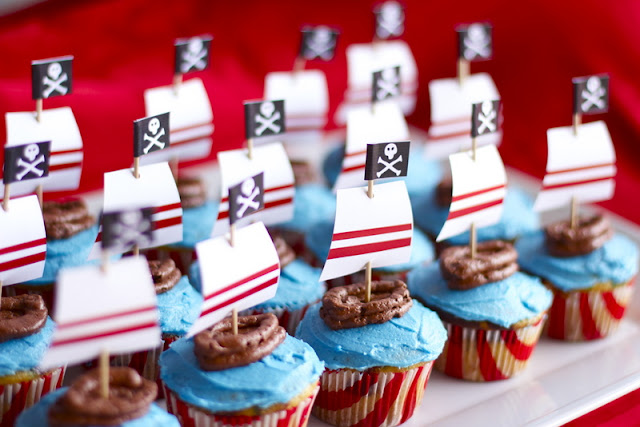 I made pirate ship cupcakes as well.  These were marble cupcakes that I frosted blue and then piped on a boat in brown.  The sales were printed and attached to toothpicks.  I got the free printable for the sails online here. 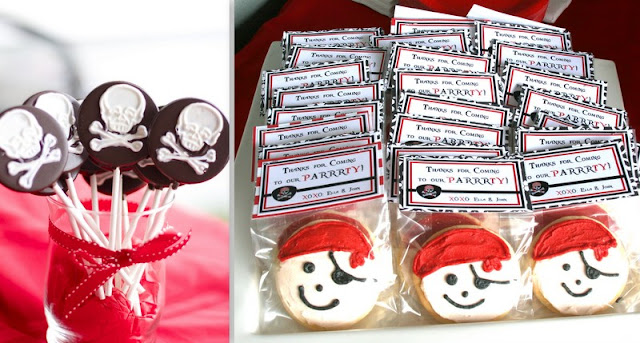 Favor: I made pirate face sugar cookies for each guest to take home and chocolate suckers.  Both took a while to do, but turned out really cute.  The tag for the cookies read, "Thanks for Coming to Our PARRty!"

Choosing to make all the desserts, hats, patches, etc. added a lot of extra work (and luckily I had some friends offer to help), but I think they were great additions to the party. My kids had a blast, and the party turned out great. 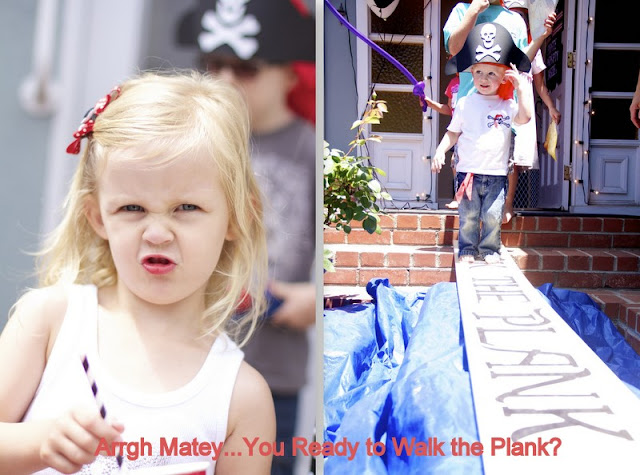 Here's a couple final shots of the birthday boy and girl!  Happy Birthday Ella and John!

*As usual, please comment on your thoughts!  Love hearing from you!  And if you would like any of the tags, treasure map, etc....just ask!

Posted by InviteandDelight at 8:38 AM

casinos room
Reading this post reminds me of my old room mate! He always kept talking about this. I will forward this article to him. Pretty sure he will have a good read. Thanks for sharing!

i absolutely LOVE this! you are so creative and resourceful! thanks for sharing!

Awesome work! I love how the colors work together!

I'd LOVE to try some of the templates/printables!! Could you please forward to oustalet@gmail.com ??

I'd LOVE if you could please send me some of your templates/printables so I can try them out for my son's bday... My email address is oustalet@gmail.com

Can I please have some printables? They are lovely, especially the food signs and station signs. Thanks starfish_joski@hotmail.com

Love your party! Could you please send me the templates that you use? I am throwing a pirate party for my kids and they would be PERFECT! Thank you! tiffanykalexander@gmail.com

Amazing, i m from france thanks so much for'your ideas.
Caroline