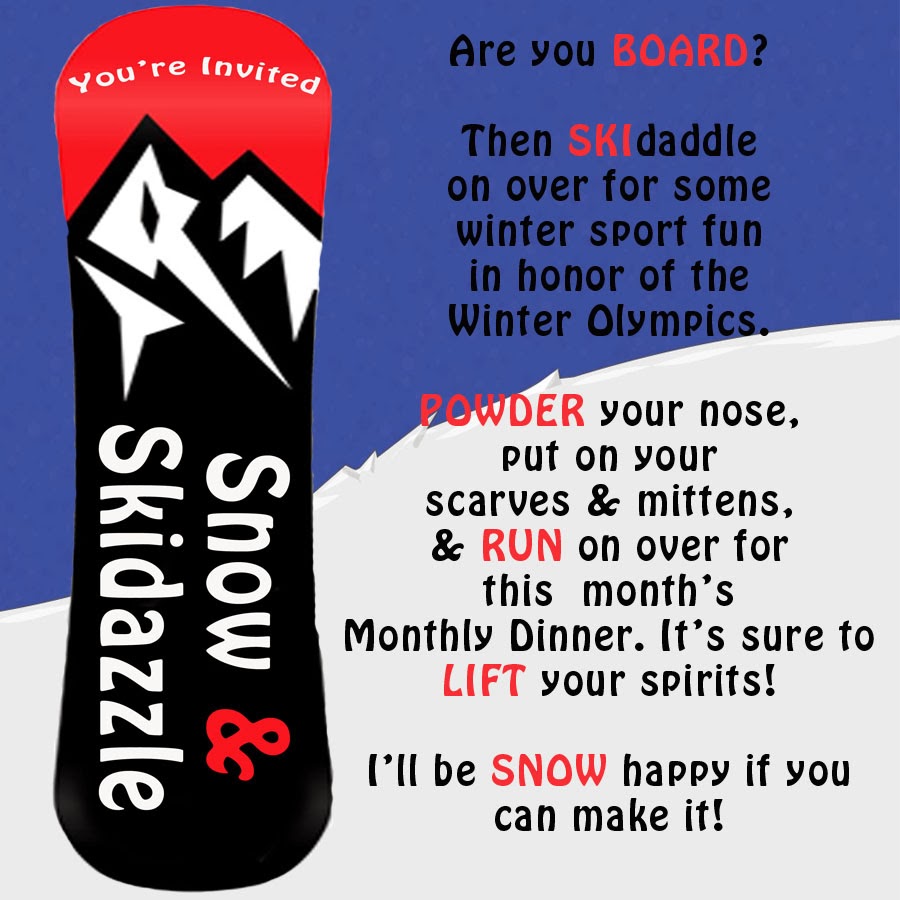 Invite:  I wanted the invite for this dinner to be a snowboard with some info on the front of it and the details on the back.  However, this concept changed when I ran out of room to add my cheesy ski and snowboarding "lingo".  If you know me, you know I love cheeseball sayings!  So I changed the invite a bit to be able to add the snow background and wording.

I also asked each guest to dress in winter attire.  Some of the girls even did ski and snowboard attire. Oh yes...we love clowning around... 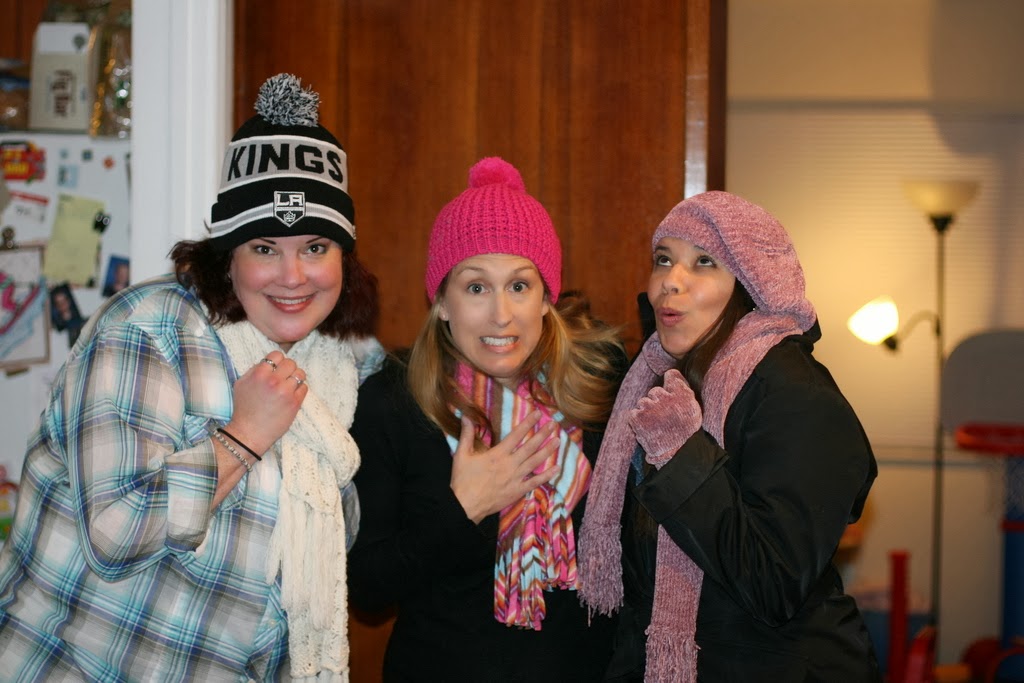 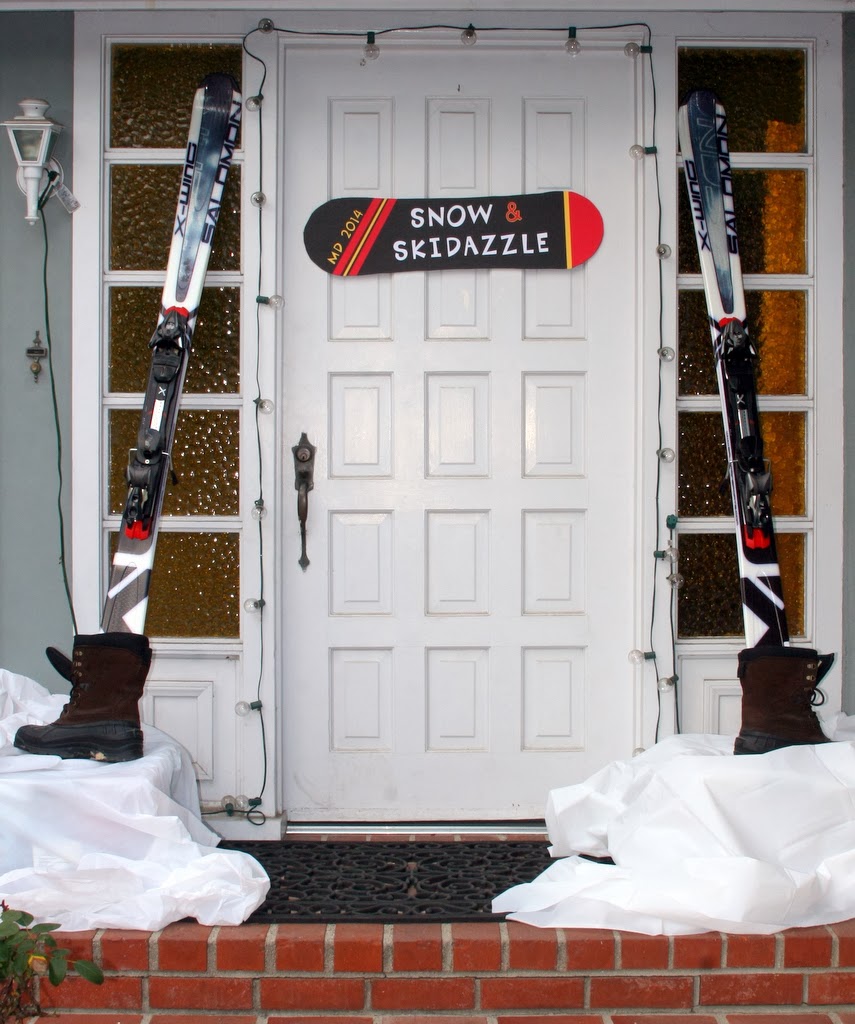 Entry Decor:  I placed my husband's skis at the entry along with a sign I cut out of form board and made to look like a snowboard. I originally planned to have the skis cross and guests walk under them to enter, but I couldn't find a way to really make sure it secure and safe. 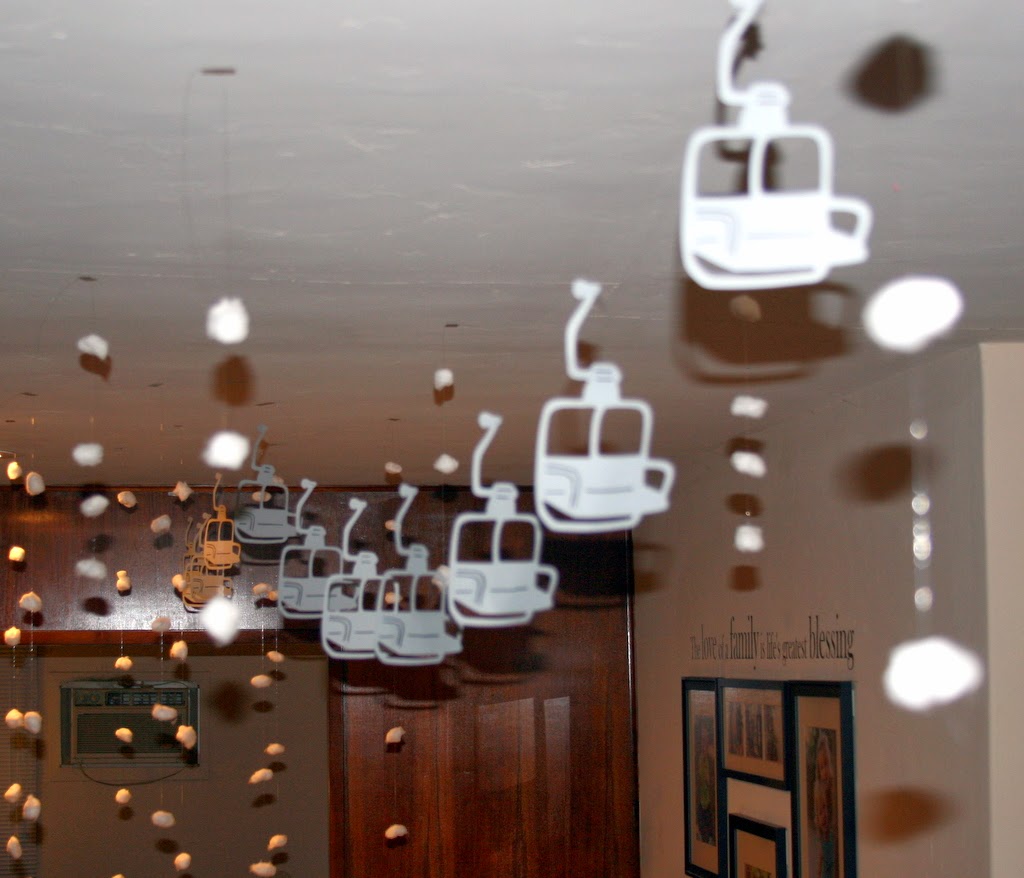 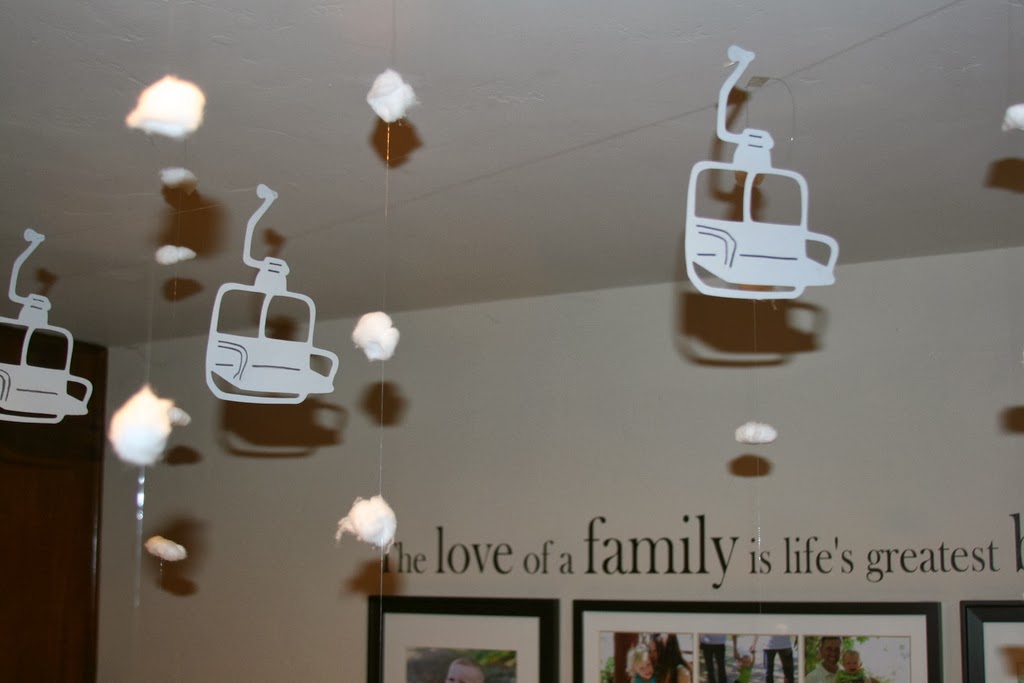 Decor: I made a chairlift across the dining table and room using fishing line and chairlifts cut with my Cricut.  The chairlift cutout was on the Cricut Everyday Paper Dolls cartridge. I also hung "snow" from the ceiling for added fun.  These I made with cotton balls and fishing line.  I used a needle and thread to string these and looped each one once to make it stay. 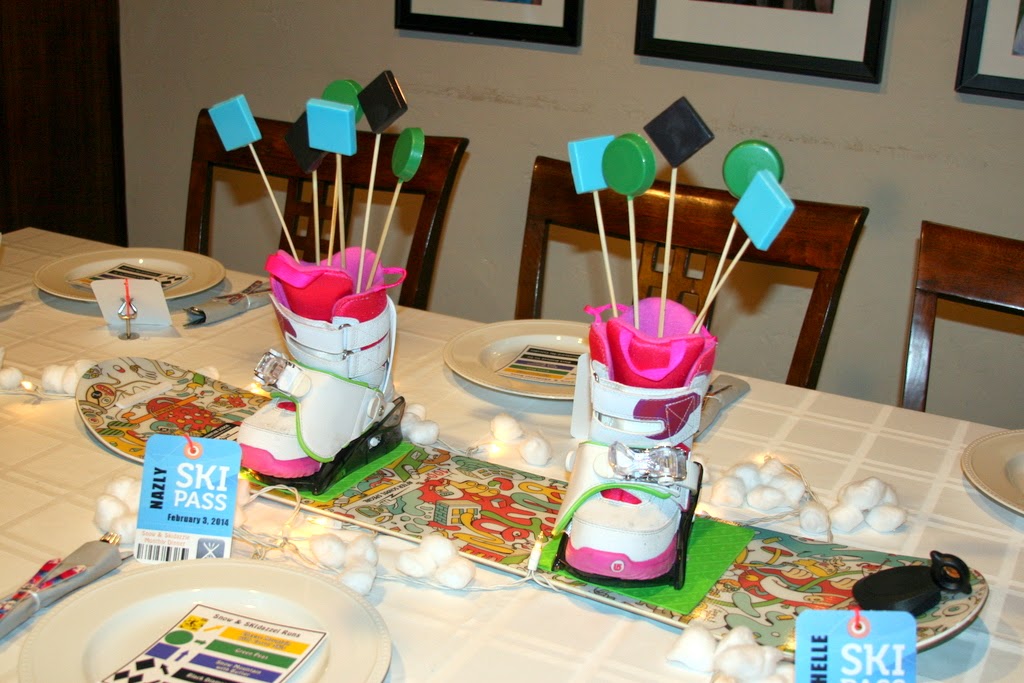 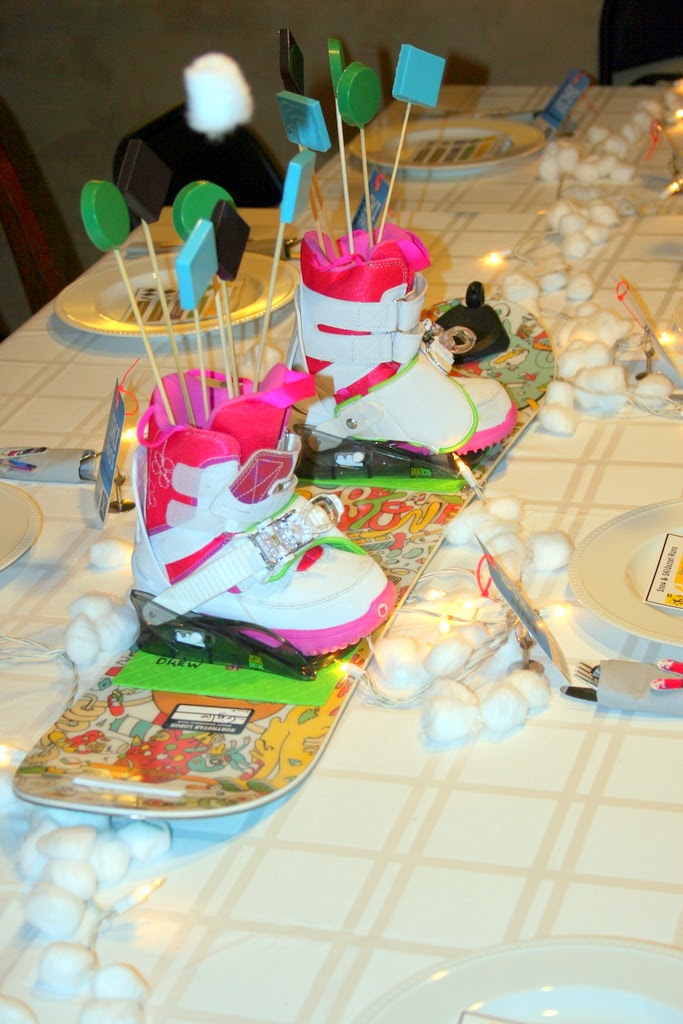 Table Decor:  I used a white tablecloth, white Christmas lights, and cotton balls to decorate along the center of the table.  As a centerpiece, I placed a snowboard and boots with chocolate candy suckers placed inside.  The suckers represented the various levels of runs when you go skiing: green circle for easy, blue square for intermediate, and black diamond for advanced. I made the suckers with skewers instead of popsicle sticks because I needed them to be longer. 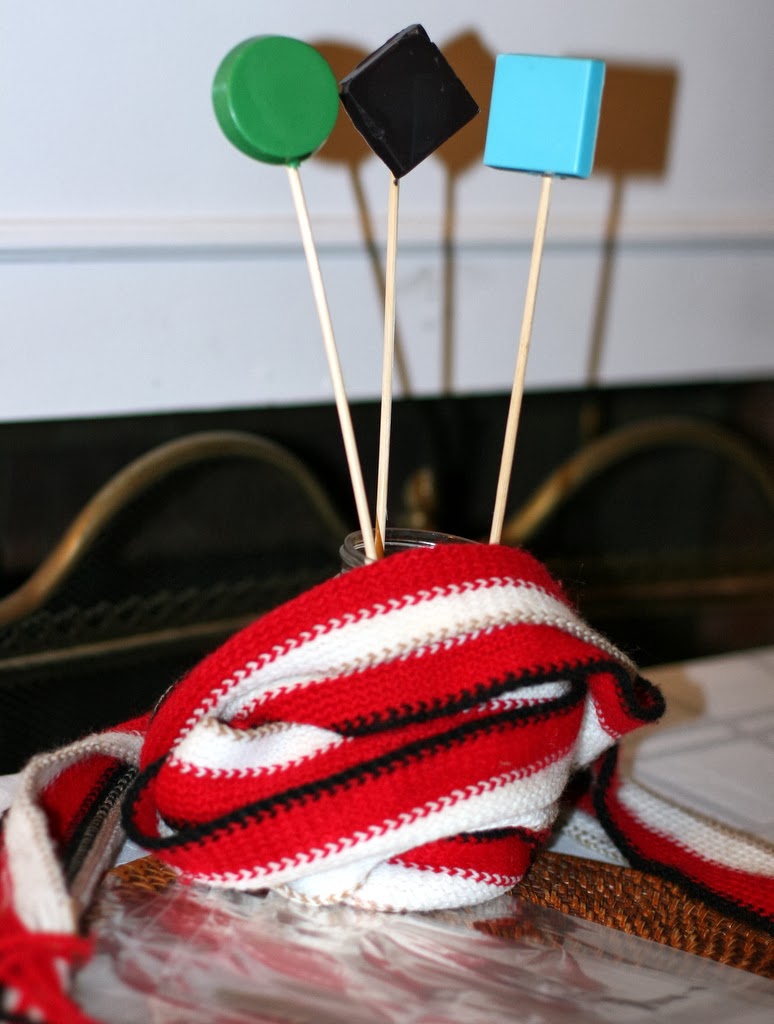 You could also place the suckers in mason jars and wrap a scarf around the jar.  This is what I did on my side table. 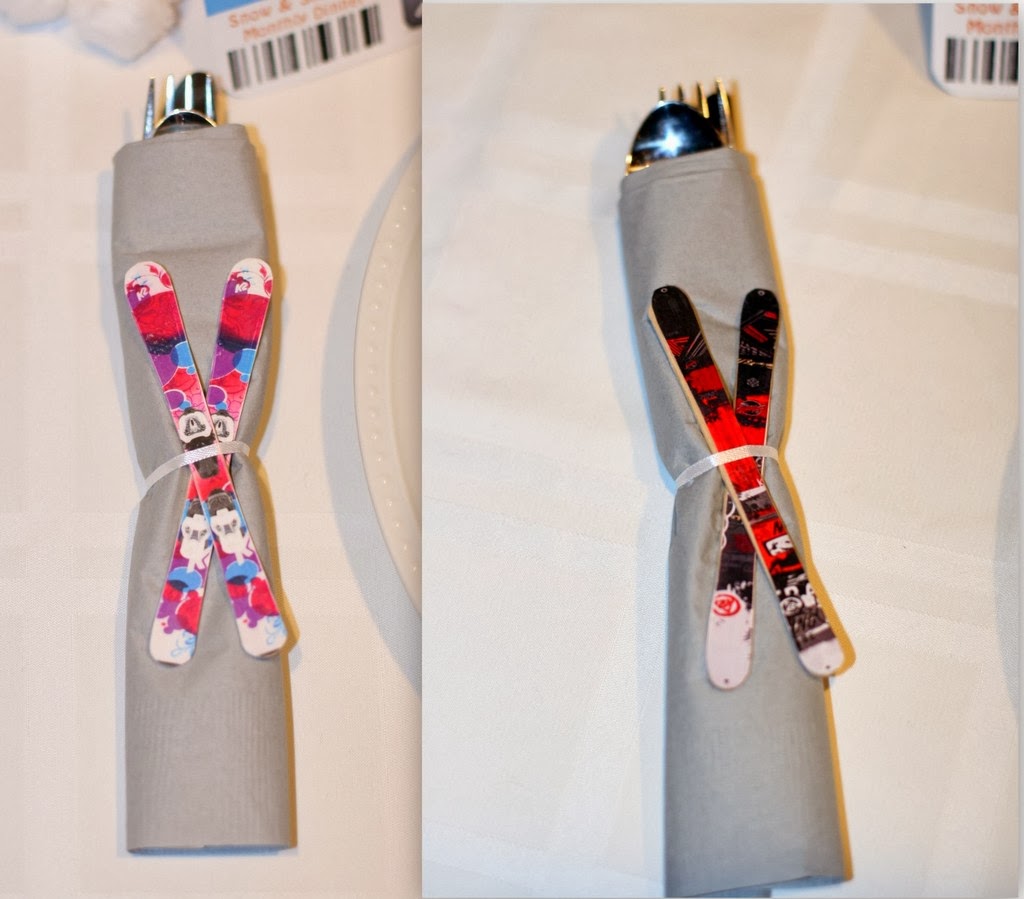 For the napkin rings, I found images of skis on Google and made them the size of popsicle sticks.  I cut them out and used Mod Podge to adhere them to the sticks which gave it a "waxy" look like actual skis. 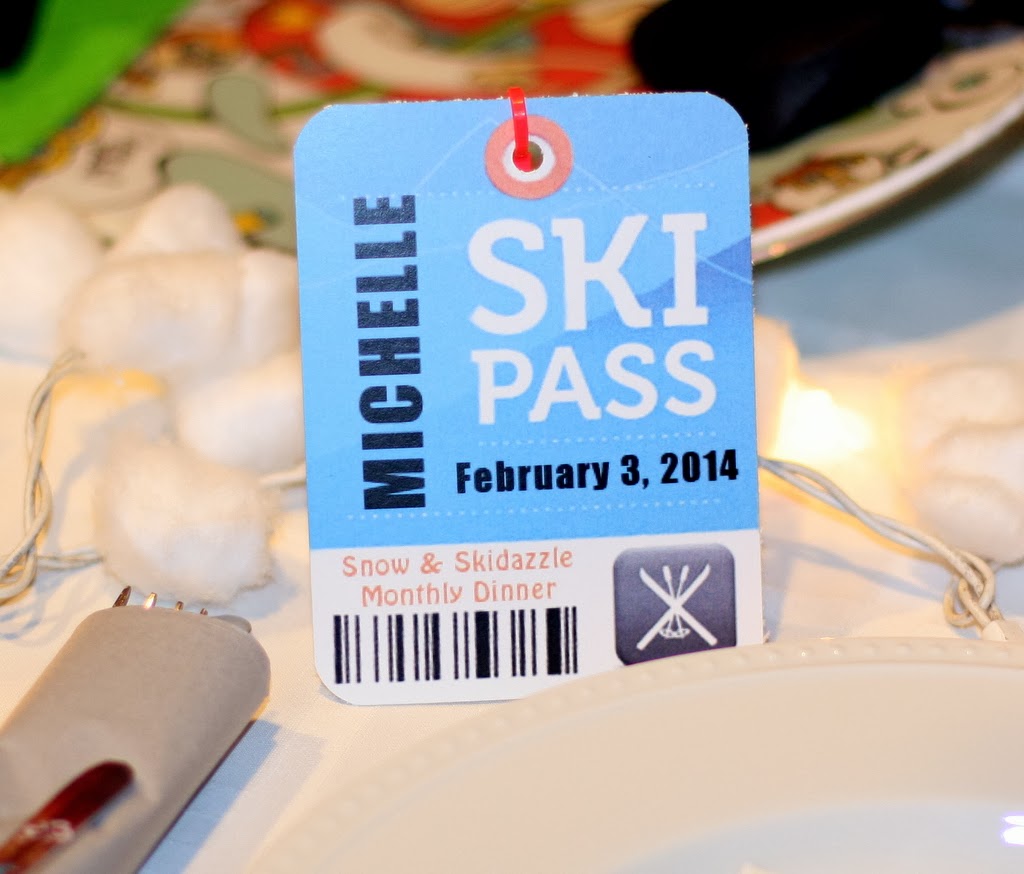 For place cards, I made ski lift tickets personalized for each guest. I added a small zip tie at the top just like they do at ski resorts. 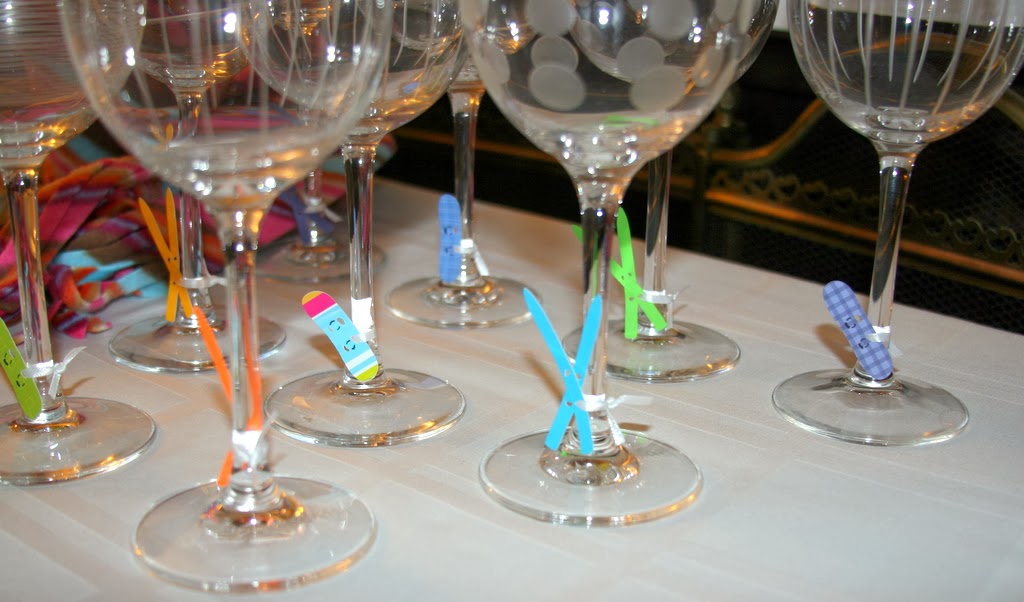 For wine charms, I again used my Cricut to make skis and snowboards in various colors/patterns. 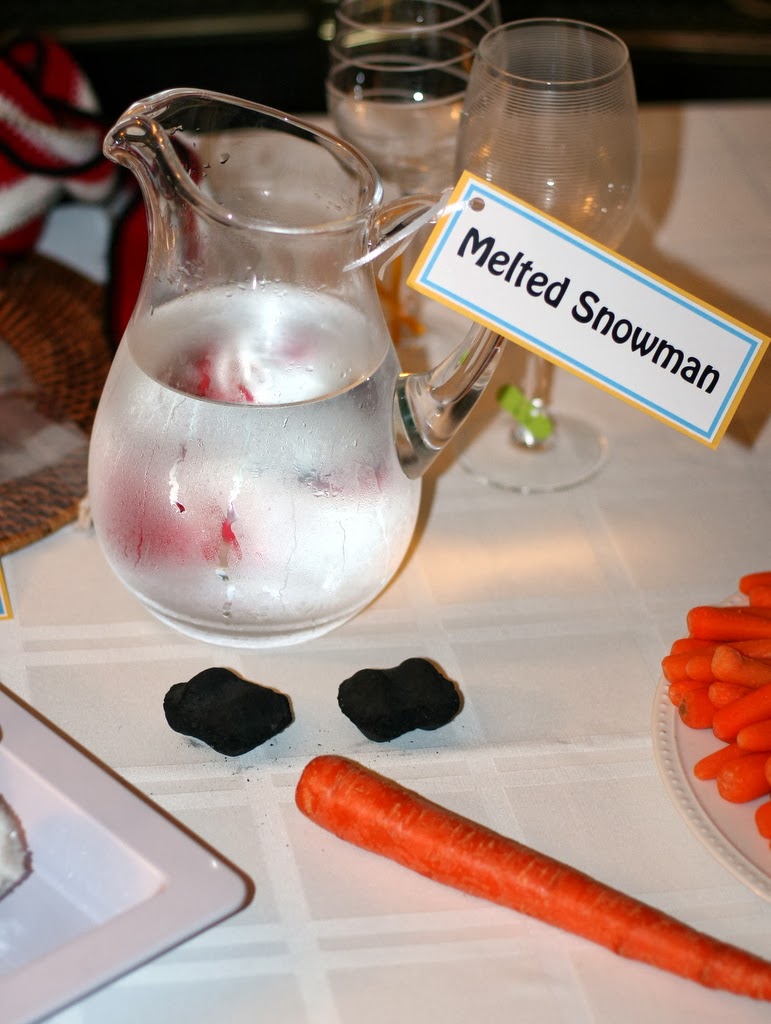 I placed two pieces of charcoal and a carrot on the table in front of the water pitcher.  This Melted Snowman was a fun way to serve water. 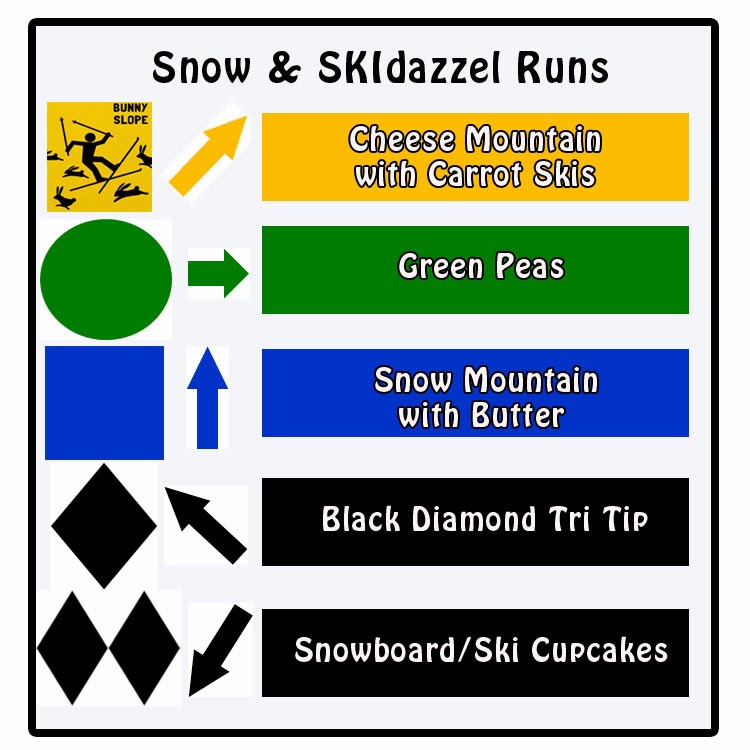 Menu:  I again used the ski and snowboard run levels in deciding my menu.  I crafted the menu card to represent the map of runs on ski slopes telling skiers which way to go to each run. 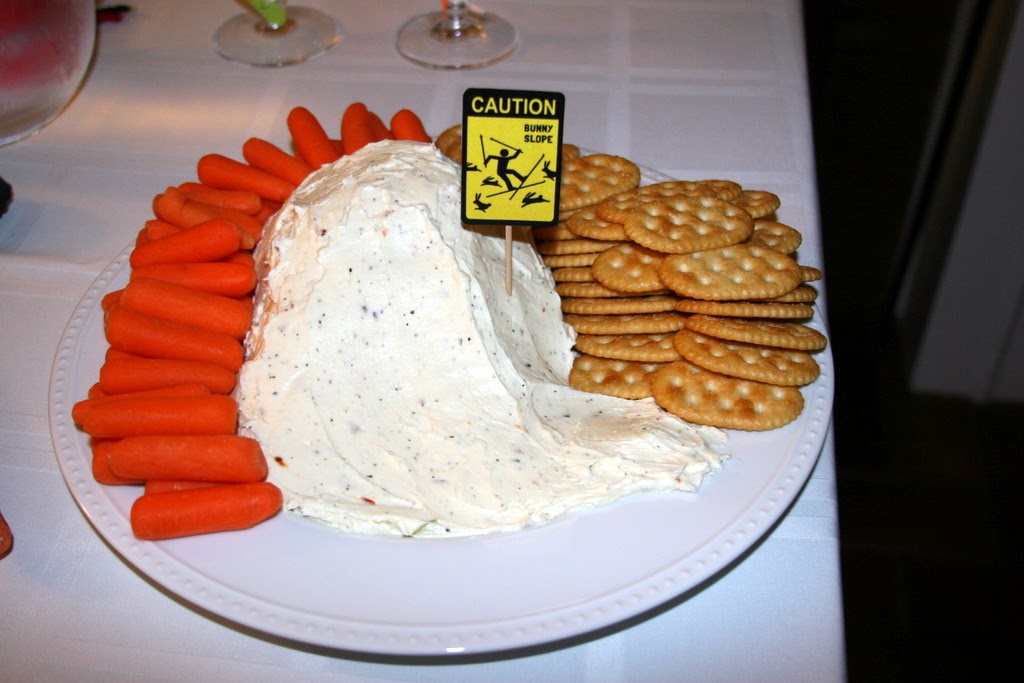 As the appetizer, I served Cheese Dip with Carrot Skis.  To make this look like a bunny slope, I placed a small bowl under the dip and shaped the slope around it.  I added a Bunny Slope tag and placed my carrot skis on one side and crackers shaped like snowboards on the other.  This dip was SUPER easy with only two main ingredients:  cream cheese and an Italian Dressing Packet.  A bit of milk was also added.  It was very tasty. 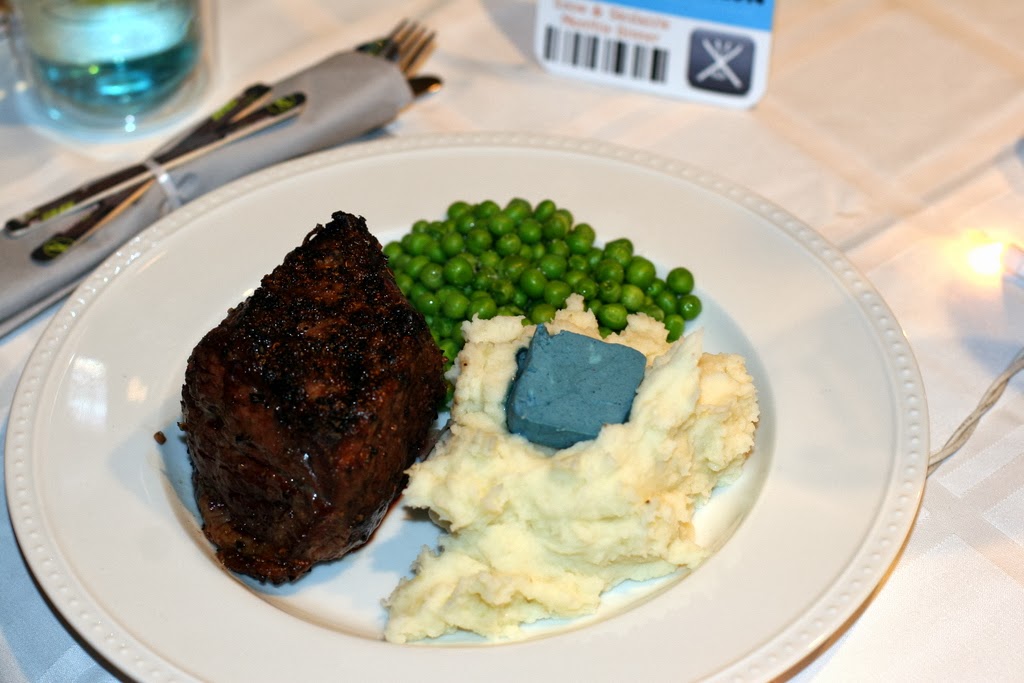 For the main meal, I served tri-tip steak, green peas, and mashed potatoes.  The steak I cut in the shape of a diamond to represent a black diamond ski run.  The peas represented the easy green circle runs.  I softened a stick of butter, died it blue, reshaped it, and then let it harden in the refrigerator. I cut a square of the block to place on top of each mound of mashed potatoes.  This represented the blue square for intermediate ski runs. 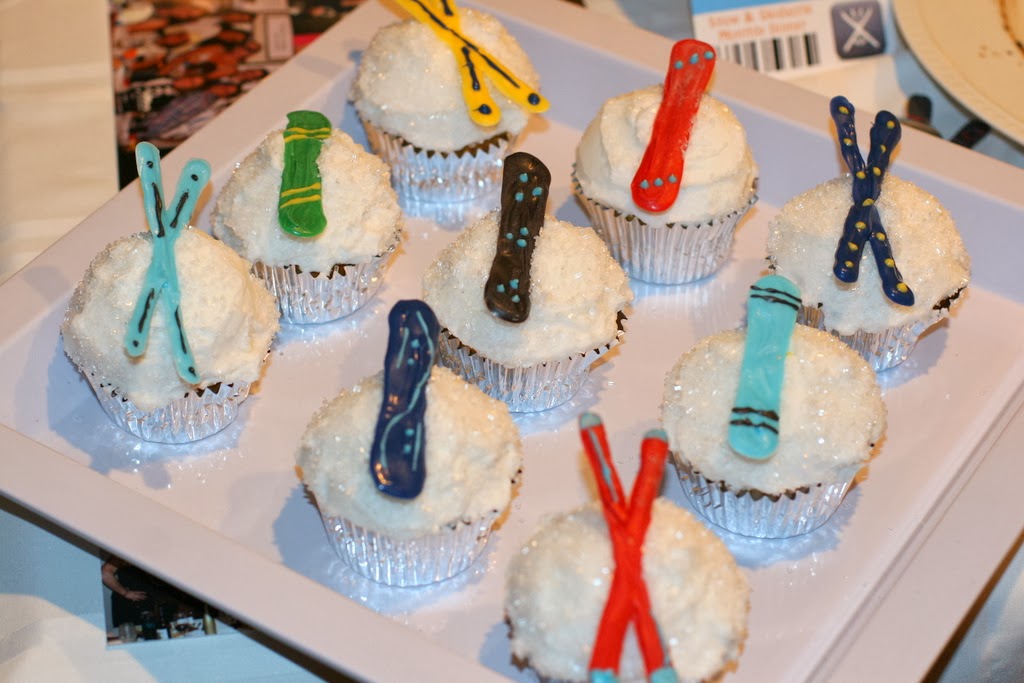 For dessert, I made snow cupcakes with ski and snowboards on top.  The skis and snowboards are just melted chocolate that I shaped using a paint brush. 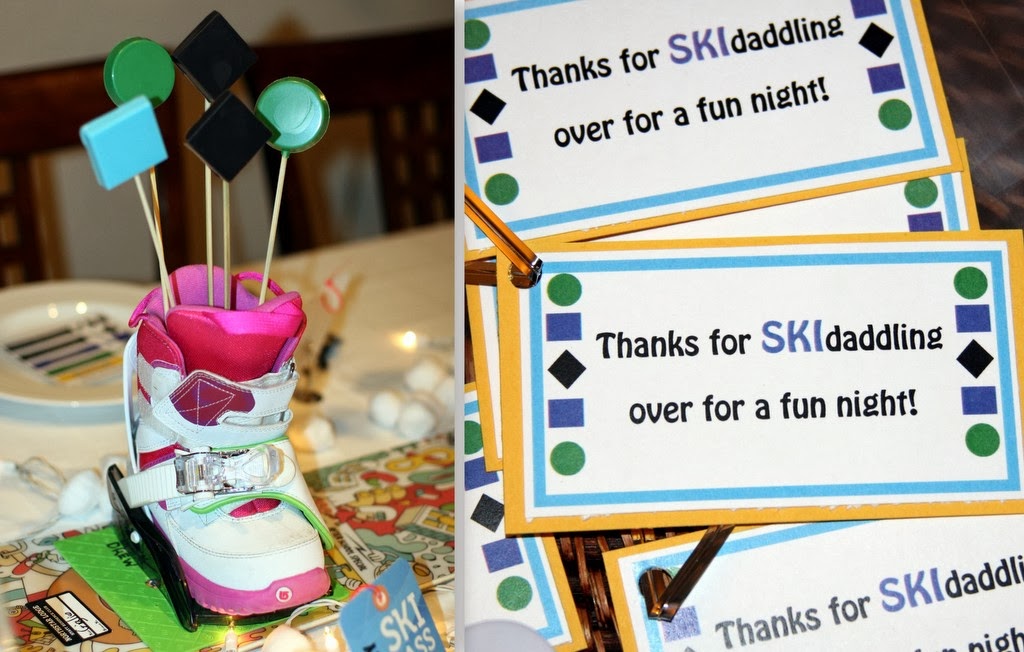 Favor:  For the favor, I had guests take home the chocolate candy suckers in the centerpiece.  I also made a tag which they added once they had placed their suckers in the bags. 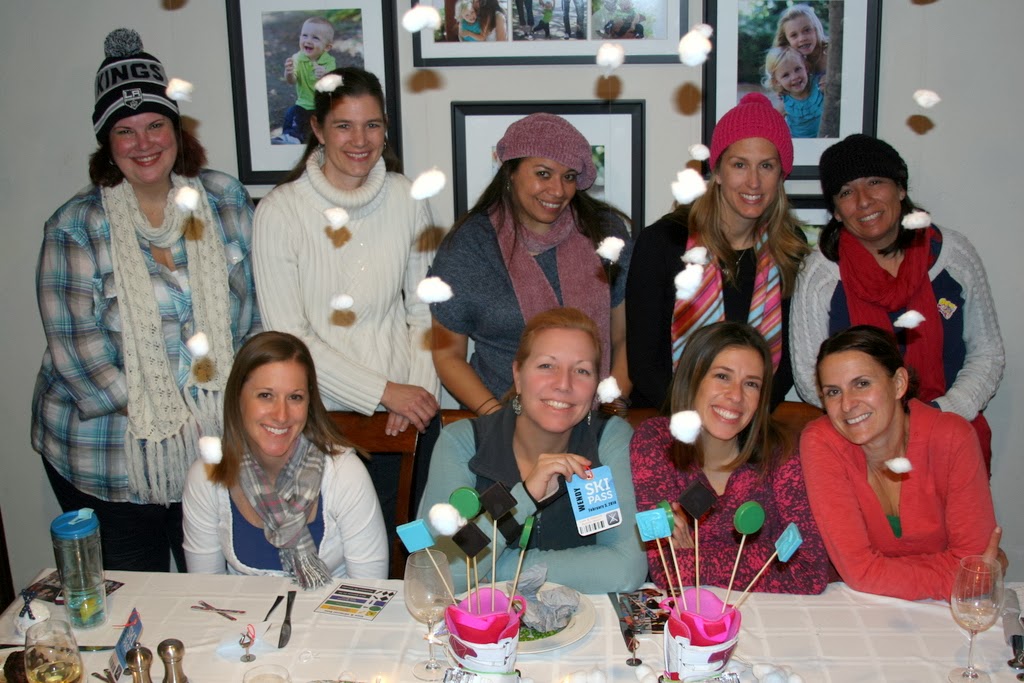 Another super fun night with the girls!  Just love hanging out with them, and especially love that they cater to my crazy themes!

Posted by InviteandDelight at 9:06 AM

Email ThisBlogThis!Share to TwitterShare to FacebookShare to Pinterest
Labels: Cupcakes, Menus with a Theme, Sports Themes

This would have been really fun for an Olympics Opening Ceremony watching party menu! Clever, clever ideas all around--that chairlift going across the ceiling especially kills me!