As a Christmas gift, my mother-in-law wanted to host a "Fantasy Dinner" for our family.  A few days after Christmas, she kicked us out of the house, and she spent the entire day decorating for this surprise.  We returned home to beautiful decor with blue and white lights on our patio, candles everywhere, elegant decorations, and even floating candles in our pool.  We ate off her China, and had a great time eating by candlelight.  She encouraged me to use parts of the decor for my January monthly dinner.  When my daughter saw all the light blues and whites, she immediately suggested I do a Frozen party.  I didn't want to "Let it Go" to waste, so I began planning a Frozen Fantasy Dinner. 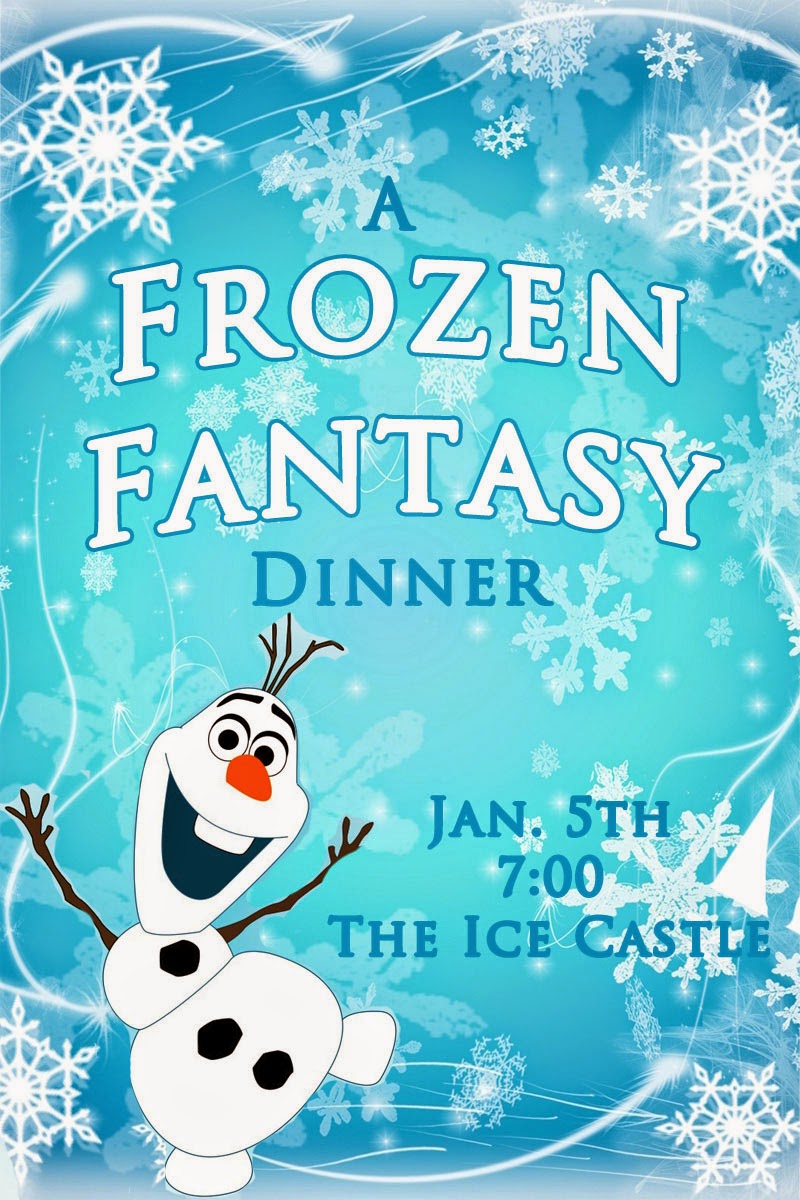 Invitations: I originally designed this invitation without Olaf on it because all the guests would be my female adult friends, so I didn't want to go too Disney and too kid-like.  However, I decided to add Olaf in the end because he's just so lovable.  I guess he is "worth melting for!" 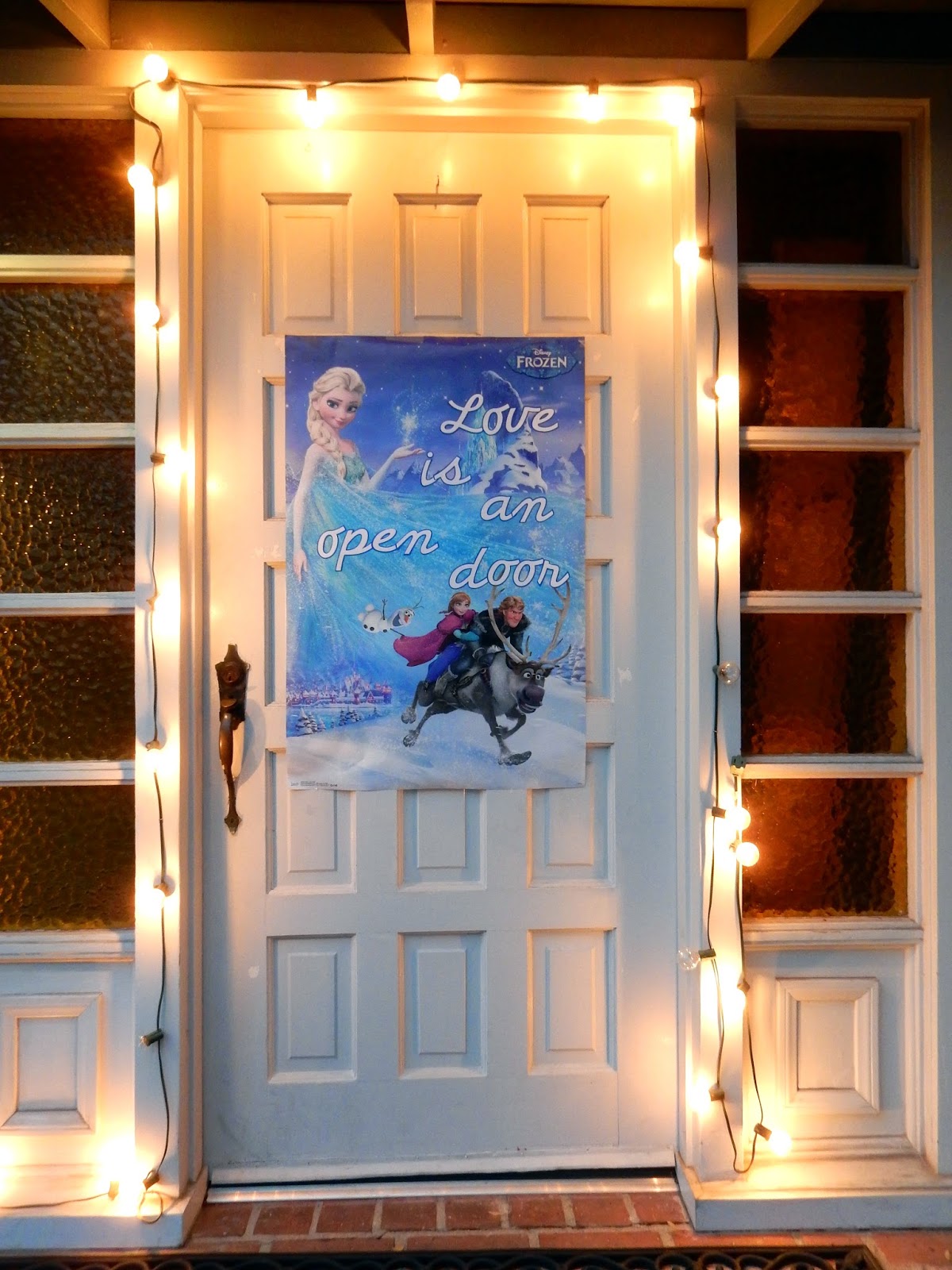 I lined the driveway and walkway leading up to my door with lit candles in light blue and white bags. I borrowed my daughter's Frozen poster for the entry door and added "Love is an Open Door" to it using my Cricut machine.  It wasn't my original plan for the door, but when time was short, plan B was put into action. 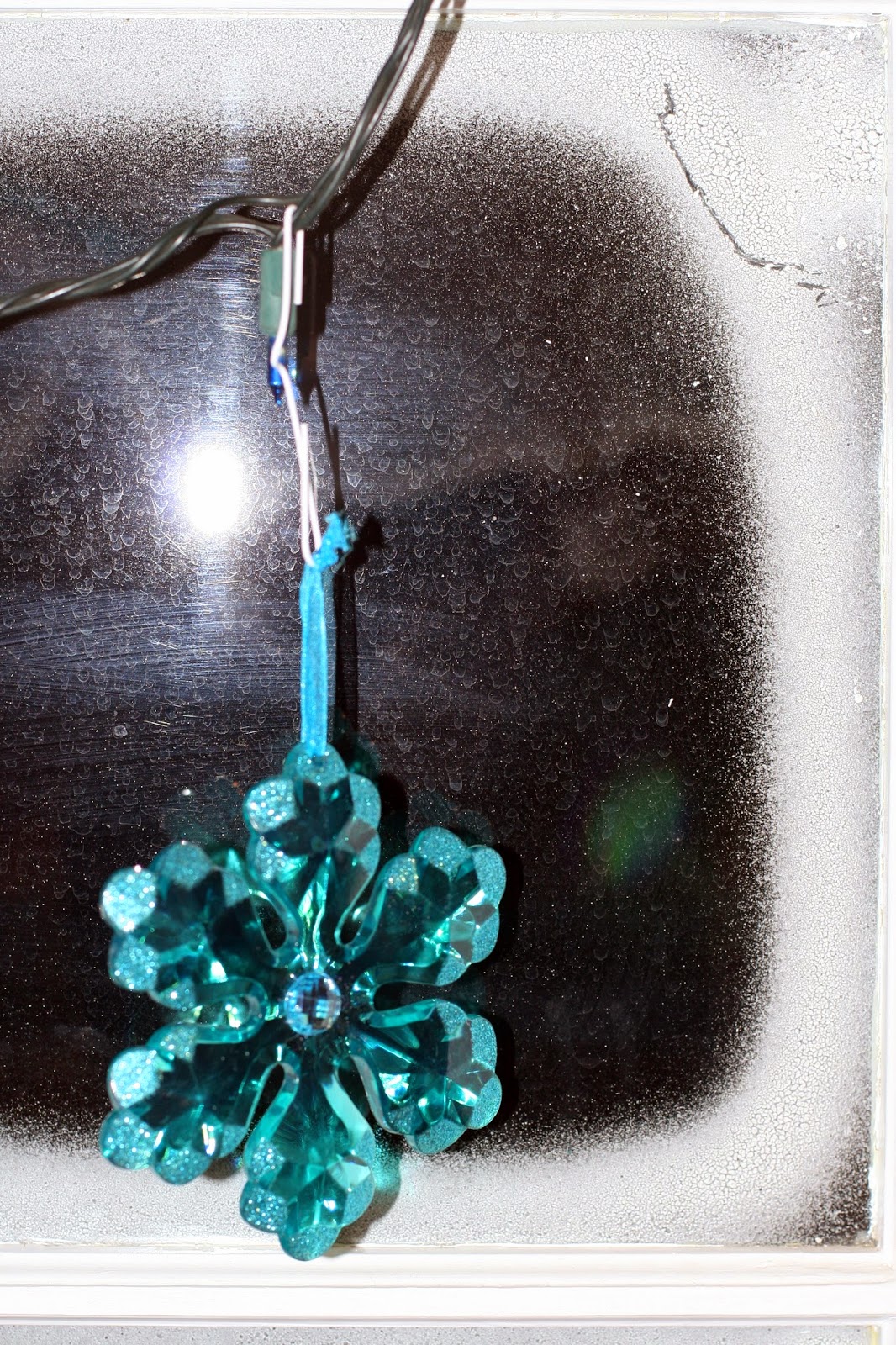 Although the dinner my mother-in-law put together was hosted outside, the weather was a bit chilly for me. I didn't want my guests to get a "Frozen Heart", so I moved many of the decorations inside. Over the dinner table, I strung blue icicle lights in a V pattern.  Along the wall, I had blue lights and hung sparkling ornaments from the strands.  My mother-in-law had already used Snow "spraypaint" on the windows, so I kept this to add to the ambiance. 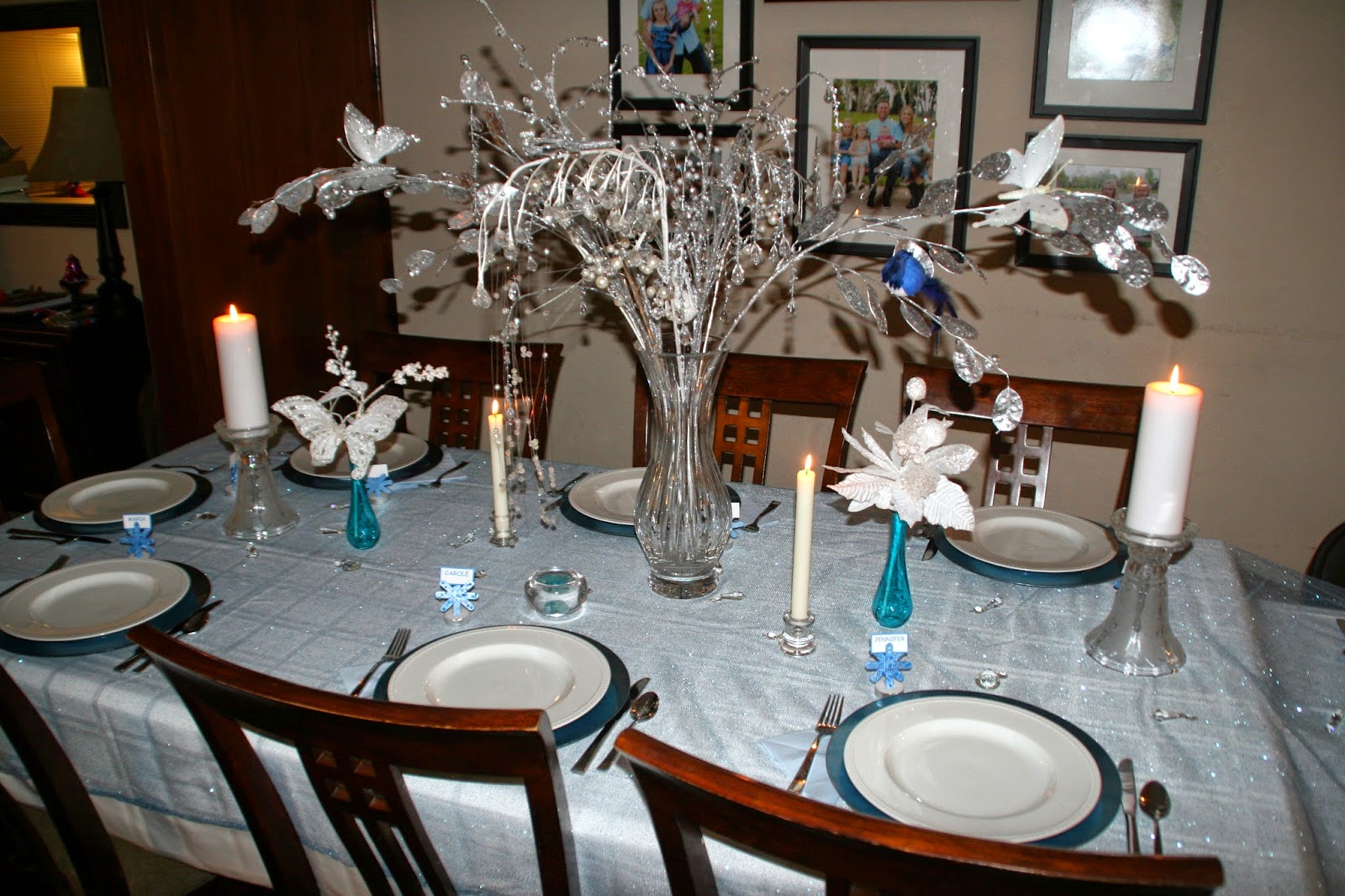 I set the table with a white tablecloth and a sheer blue sparkled netting over it. I used beautiful blue chargers (purchased at Michaels) under each plate.  The vases and candle holders were all from the Fantasy Dinner. 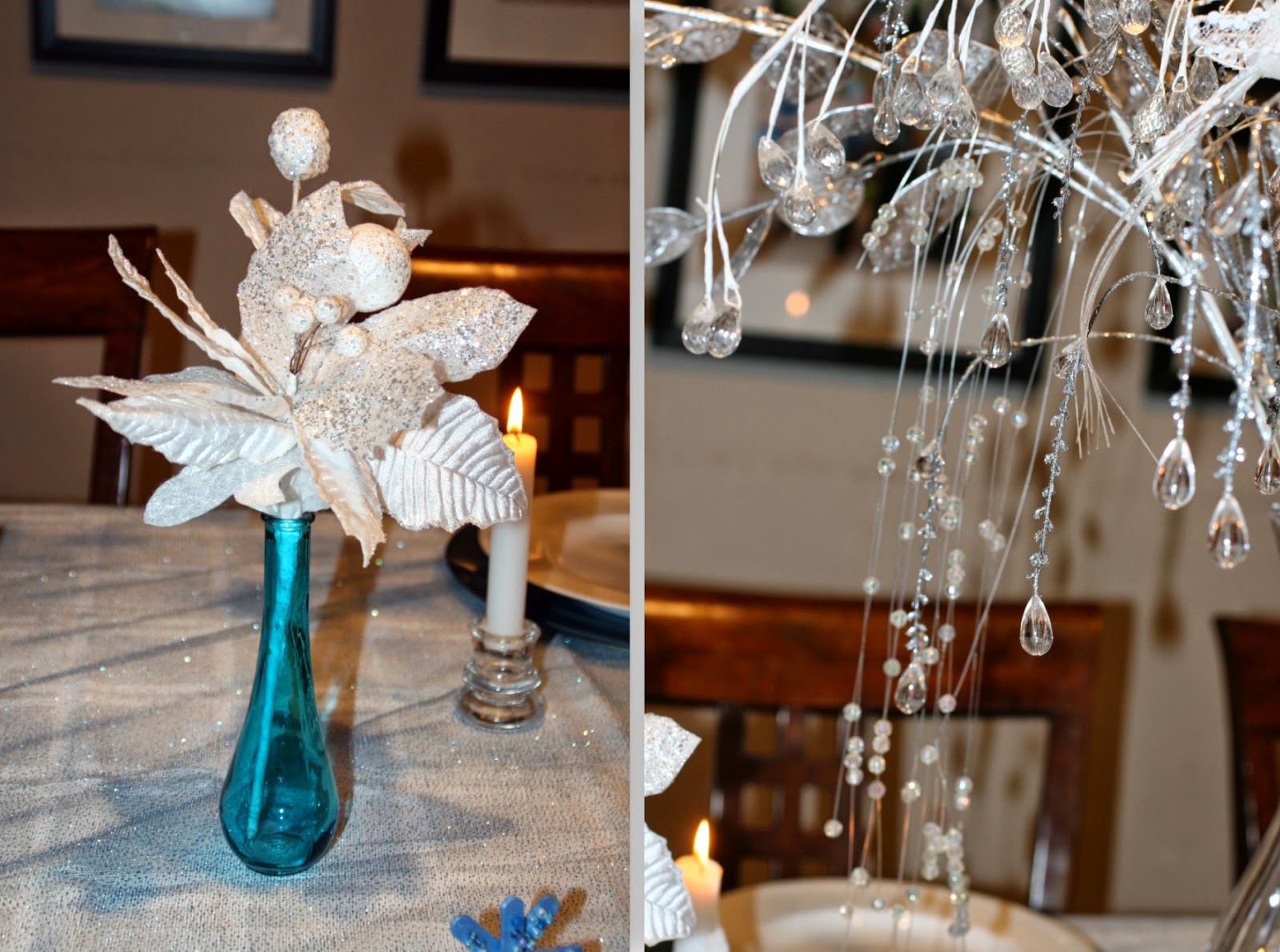 Here are some closeup shots of some of the centerpieces. 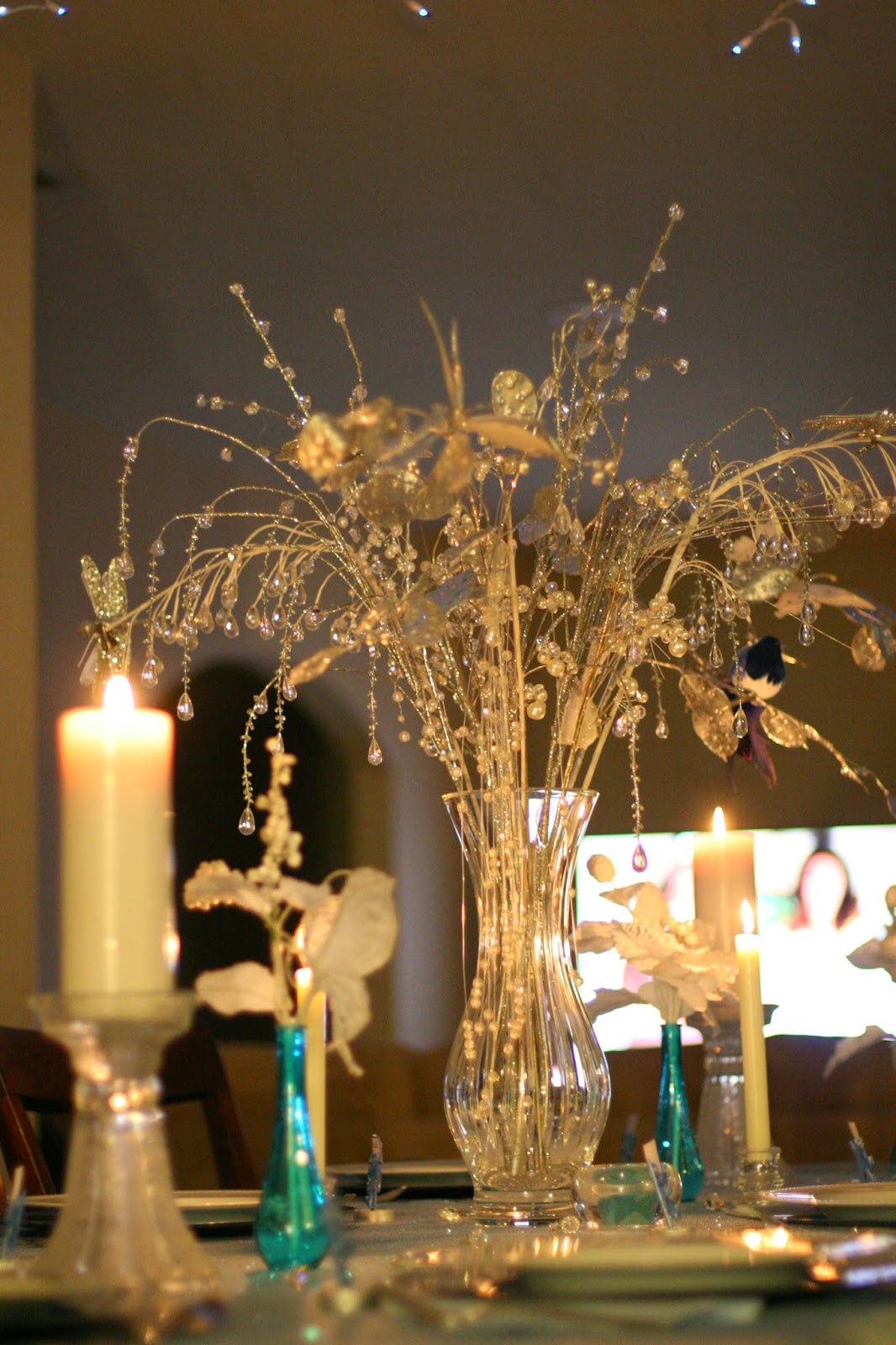 Once the lights were low, the sparkle and candles really set a "fantasy" mood.  (That's the Frozen movie playing in the background). 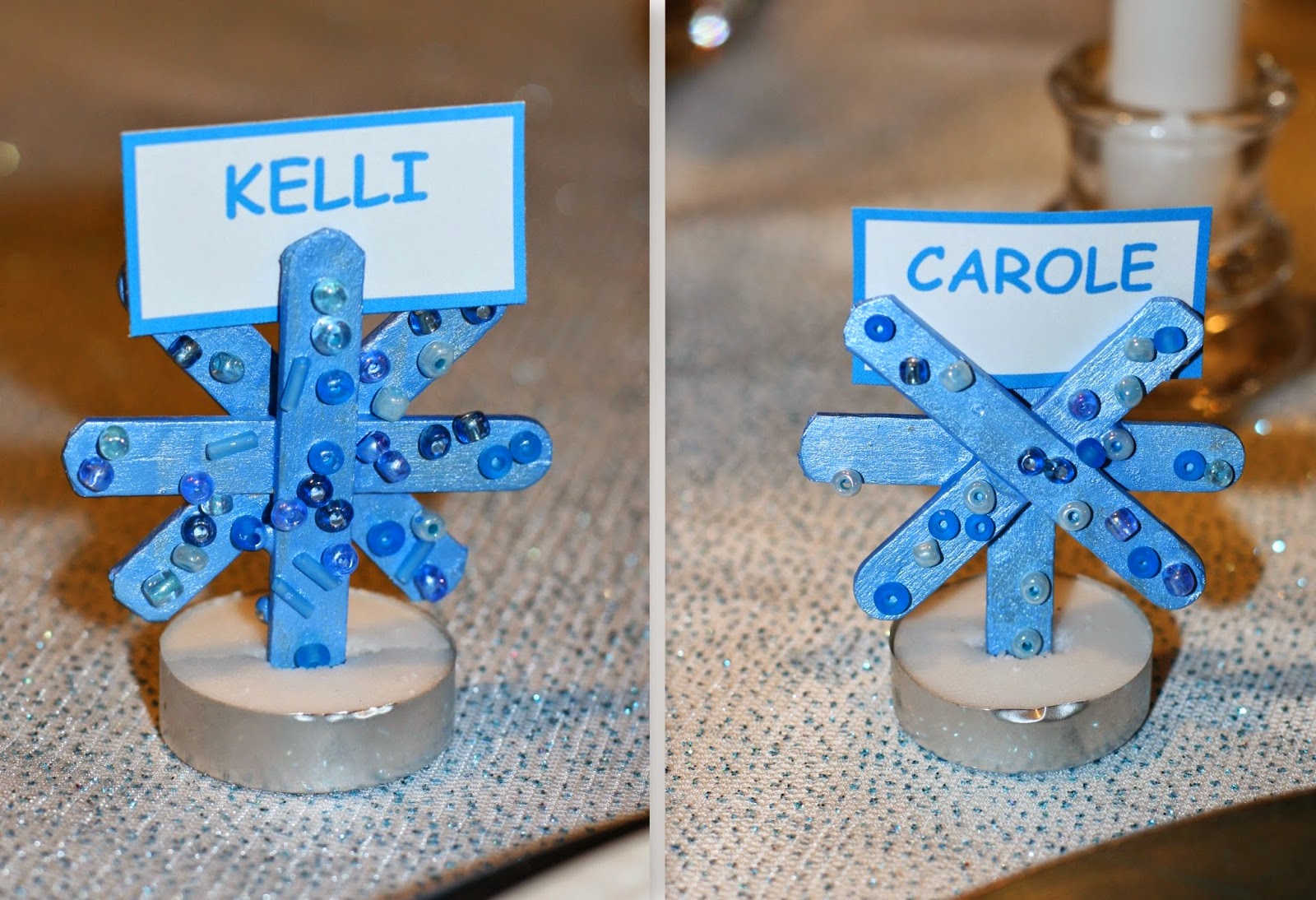 I made blue snowflakes out of Popsicle sticks for the place cards. I cut the sticks in half, rounded the edges, glued them together, and painted them.  The beads I got from the Dollar Tree and added them right after the paint so the paint would dry and hold them.  It worked and I didn't have to use glue.  To make them stand up, I took the wick out of tea lights, widened the hole, and stuck the snowflake inside. 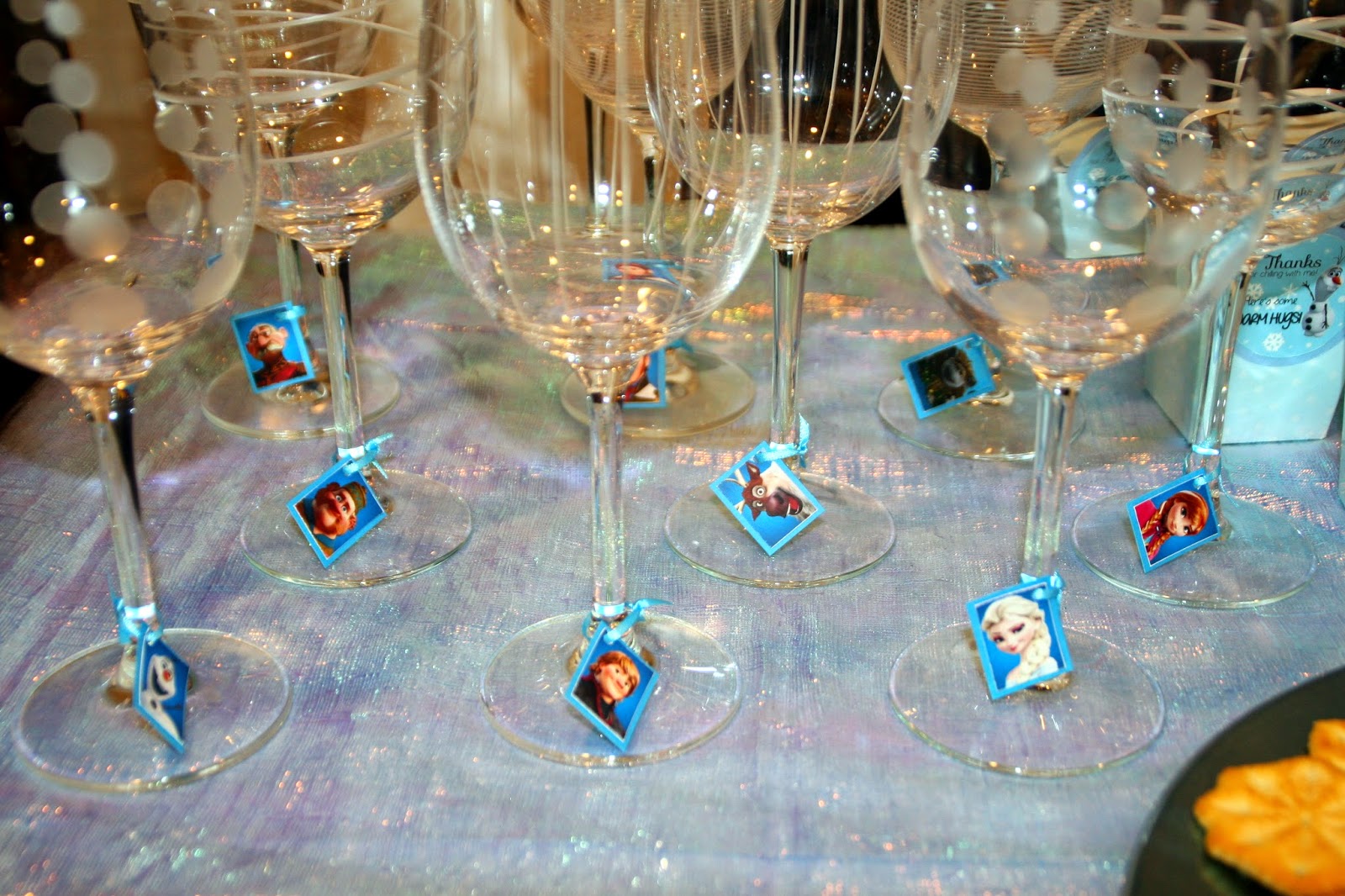 I found photos of the Frozen characters online to use as wine charms. 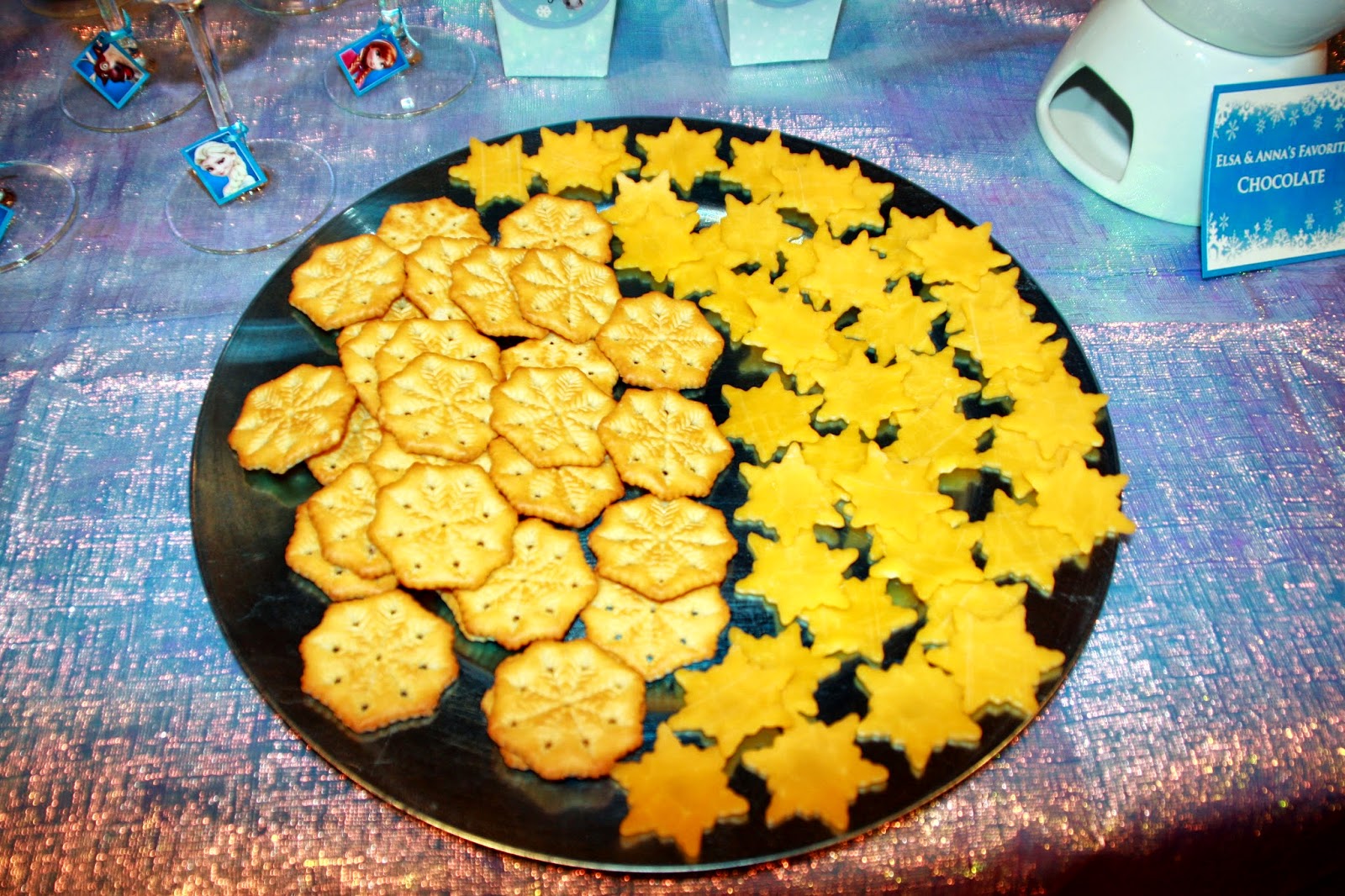 Menu:  As an appetizer when guests arrived, I served snowflake cracks and cheese.  I discovered at the grocery store that Ritz makes snowflake shaped crackers this time of year, so I picked those up. I used a cookie cutter to make the cheese snowflakes. 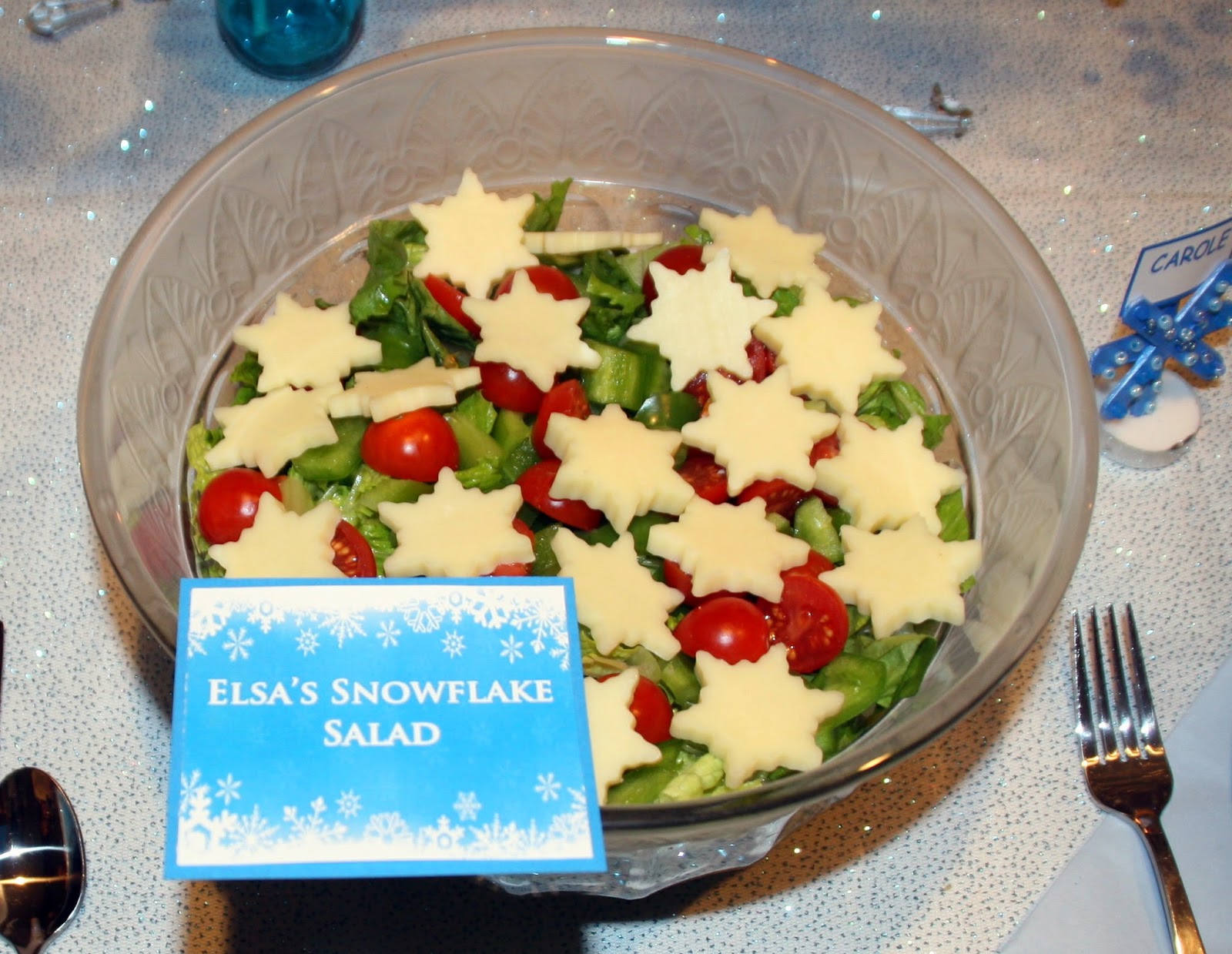 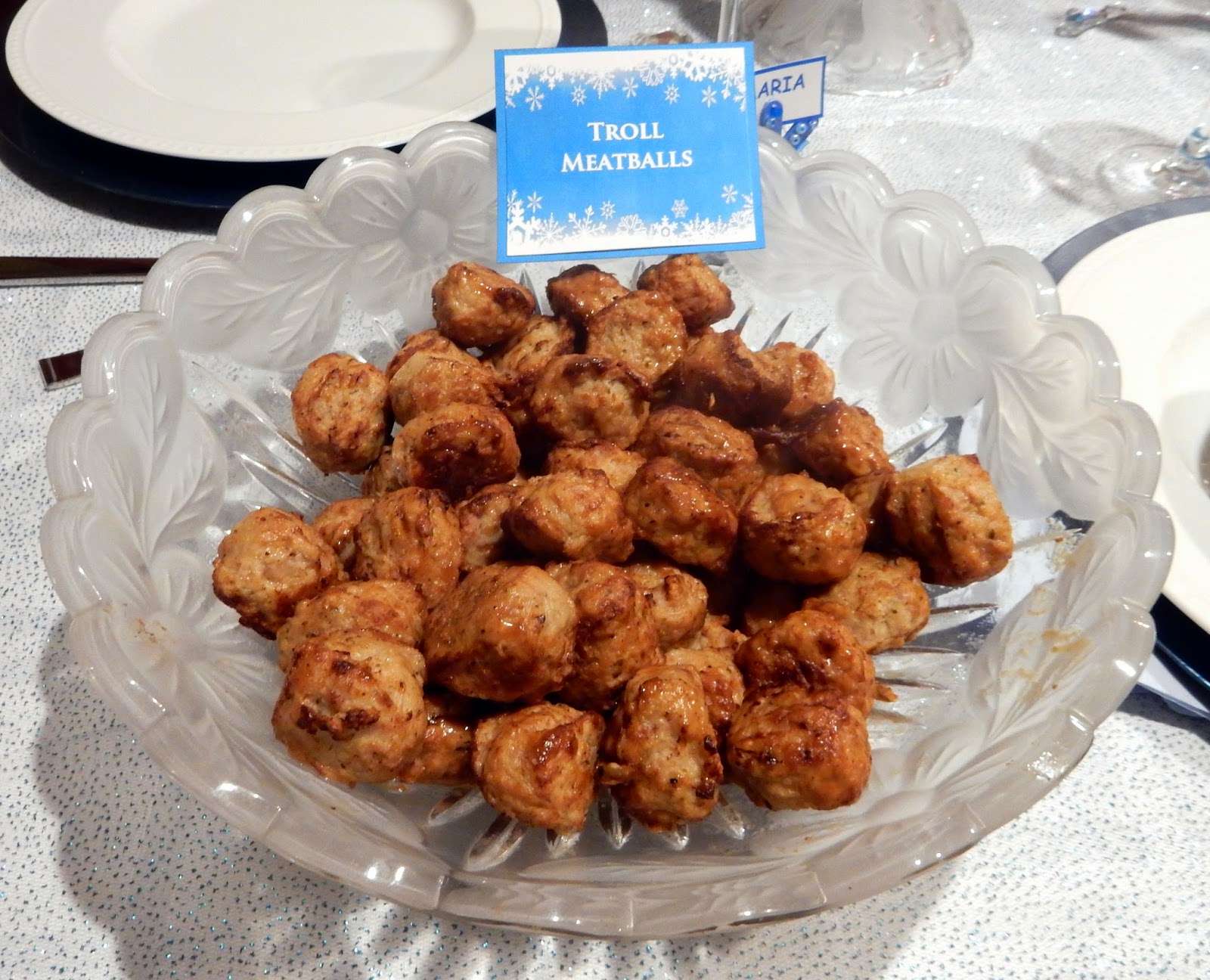 I tried to incorporate the Frozen characters into each aspect of the meal, so the main dish was turkey meatballs that I named after the Trolls in the movie. 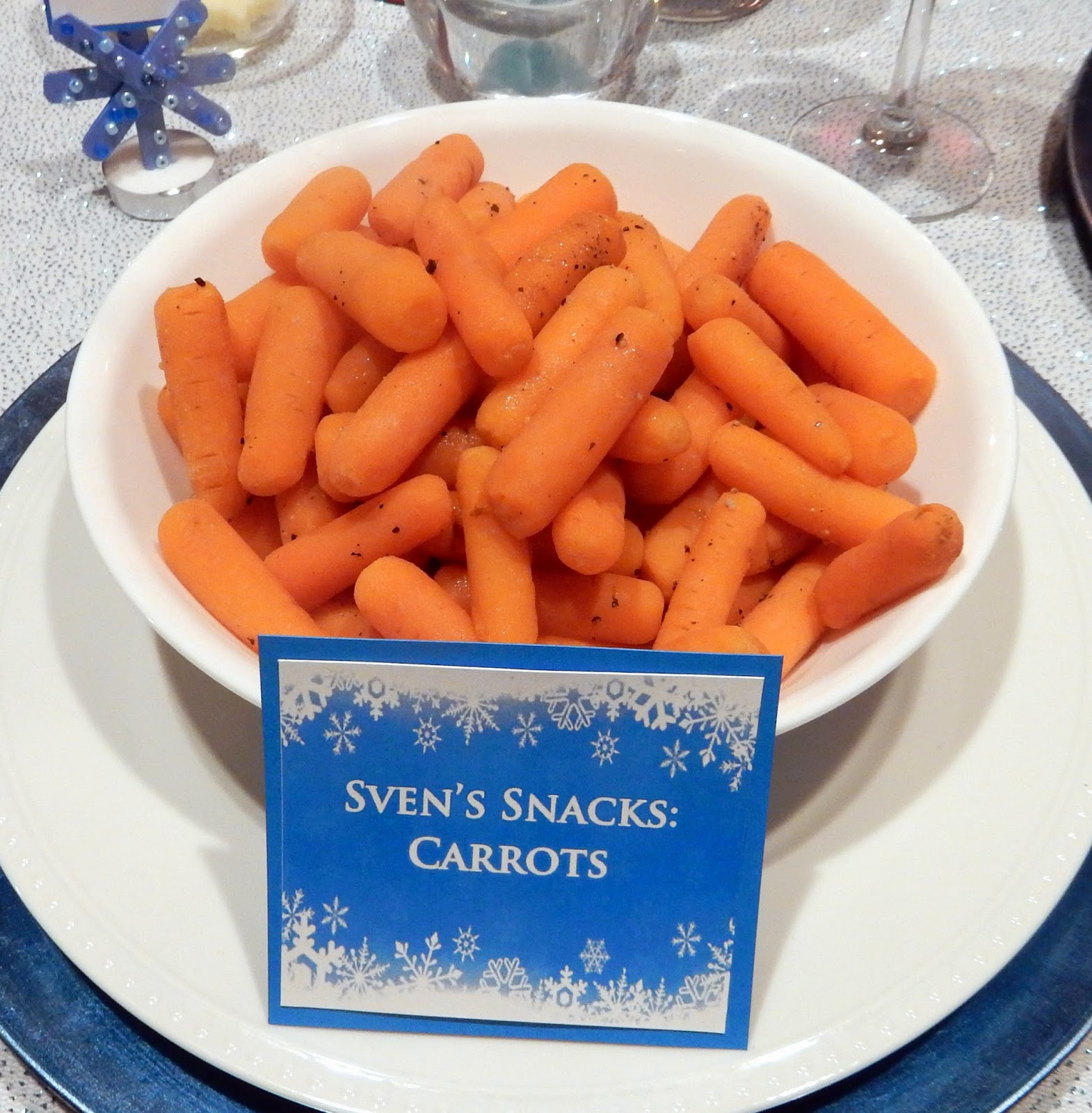 With them, I served cooked carrots -- Sven's favorite snack in the movie. 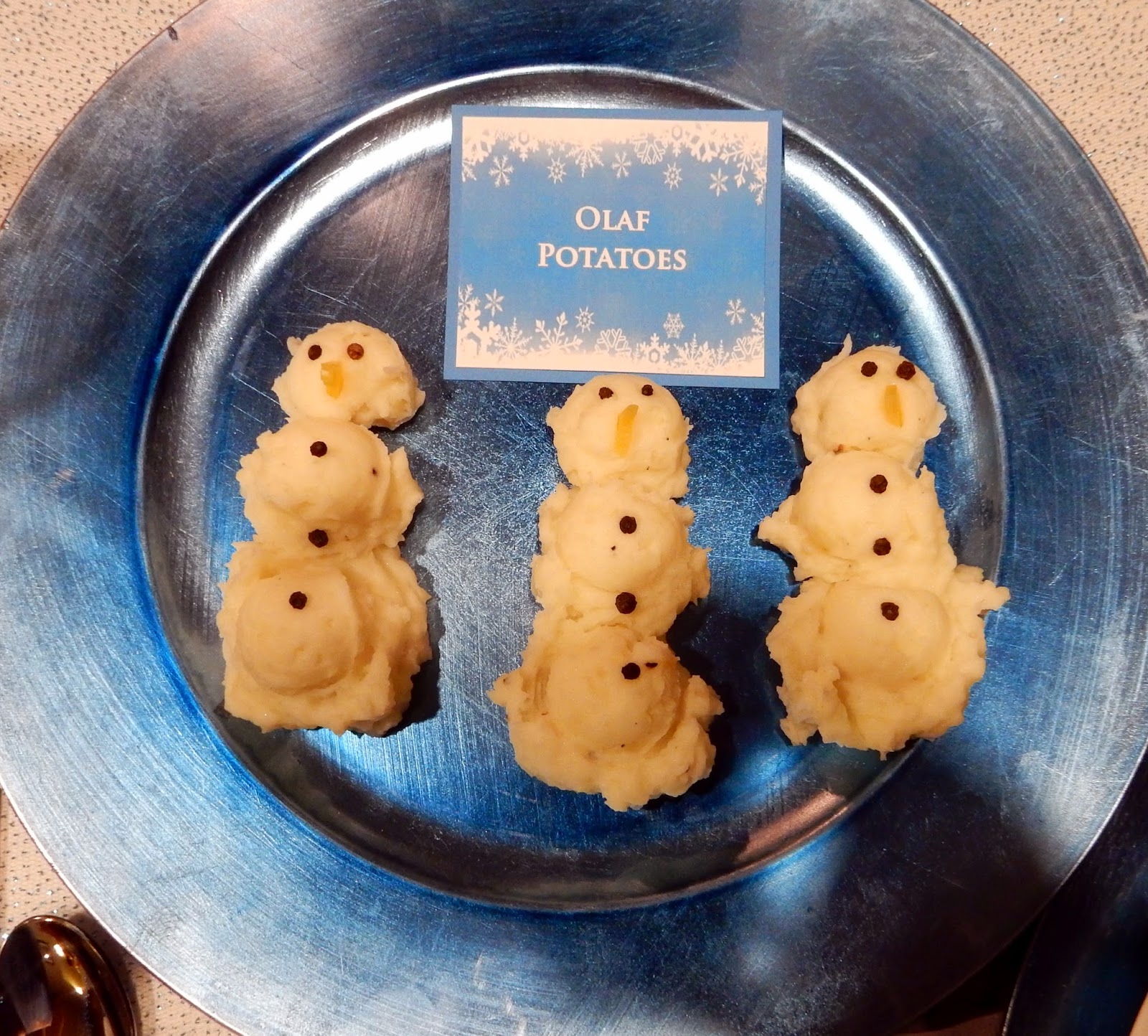 And of course mashed potatoes that I used a butterball scoop to shape into snowmen to represent Olaf.  Black pepper and a small wedge of cheese (leftover from the appetizer) made the buttons and nose. 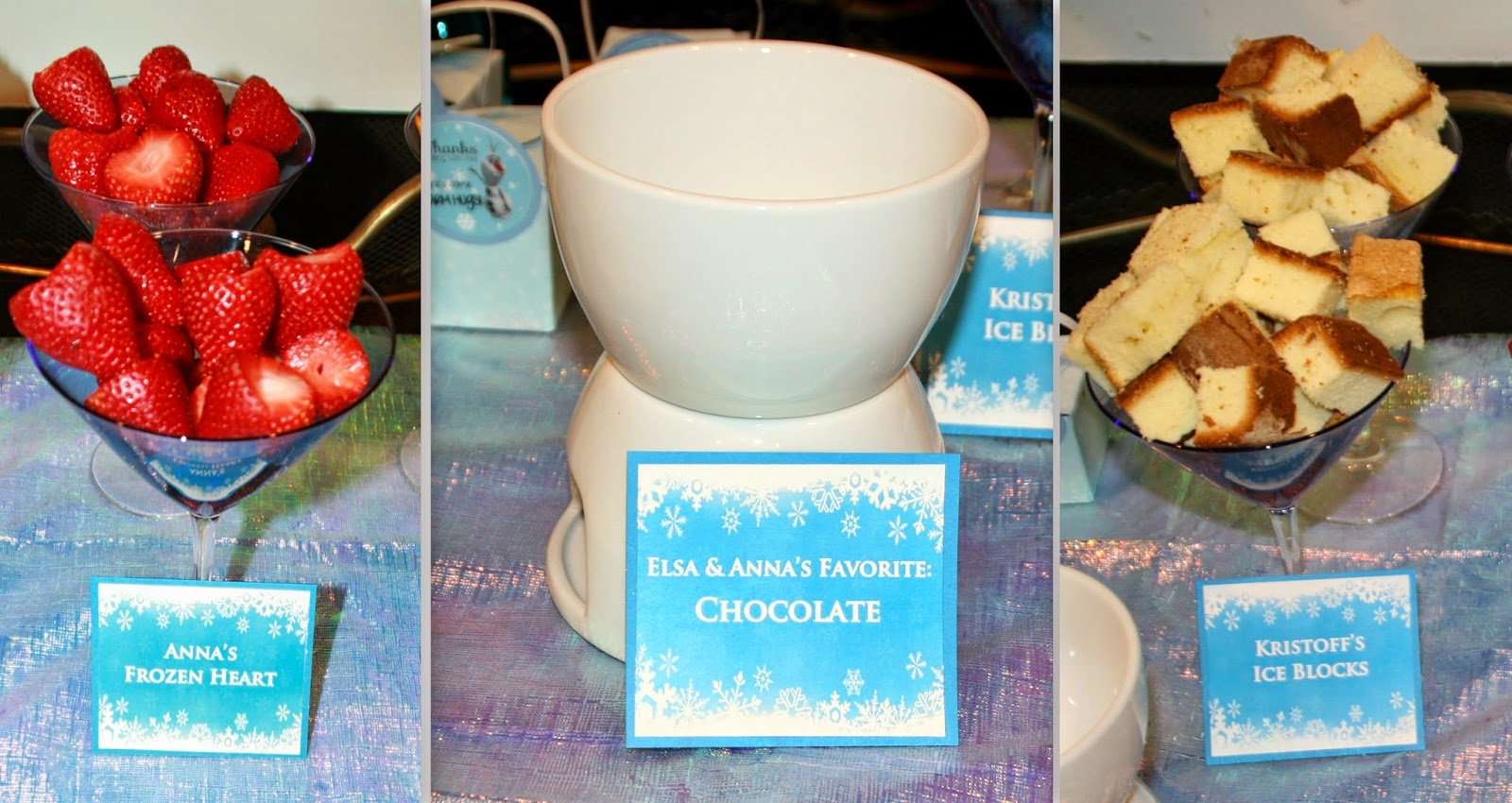 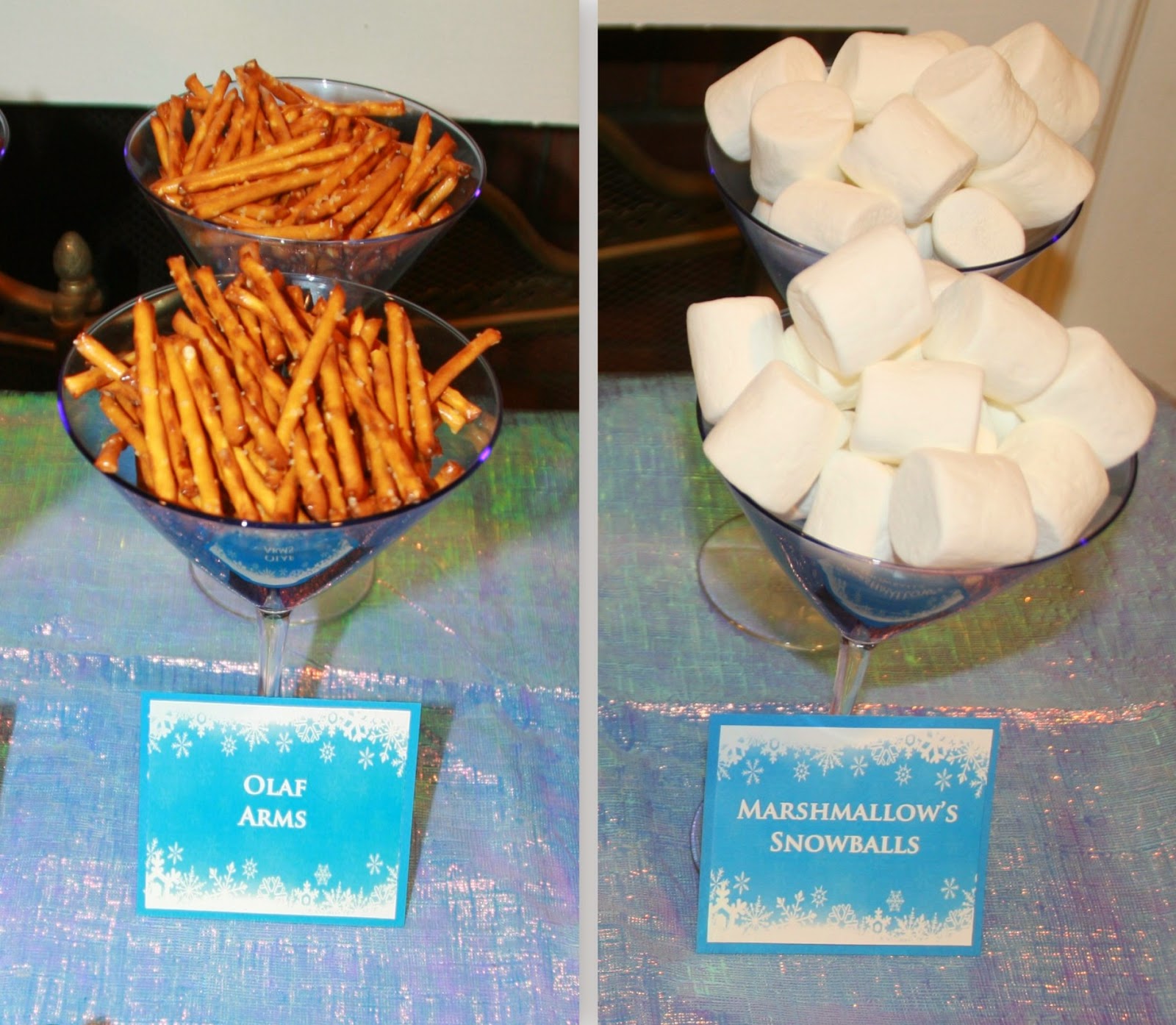 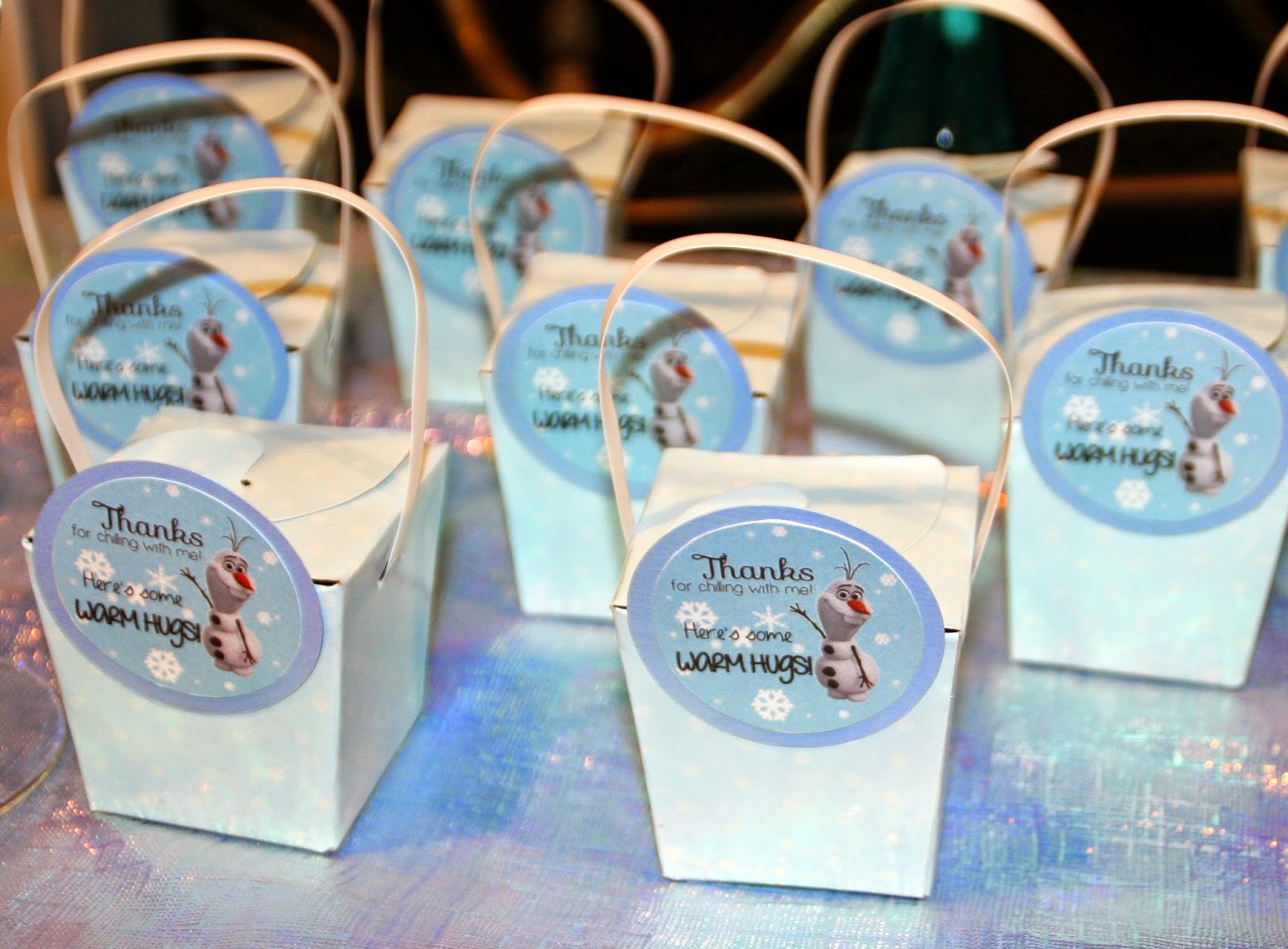 Favor:  I needed a super simple and easy favor, so I decided to give the guests Hershey's Hugs since
Olaf loves warm hugs.  I found a tag online, and I changed the wording to say, "Here's some warm hugs!"  The little blue boxes I found at the Dollar Tree -- 8 for $1. You can't tell in the photo, but the boxes have little white dots on them. 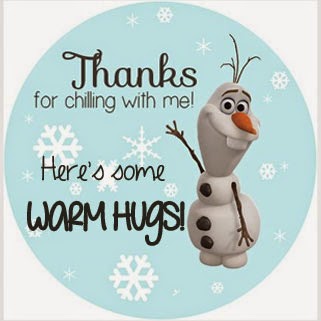 Posted by InviteandDelight at 9:31 PM