My husband is obsessed with the Tour de France bicycling event, and over the years, I have grown more interested myself.  What intrigued me even more was deciding how to transform this event into my July monthly dinner theme... 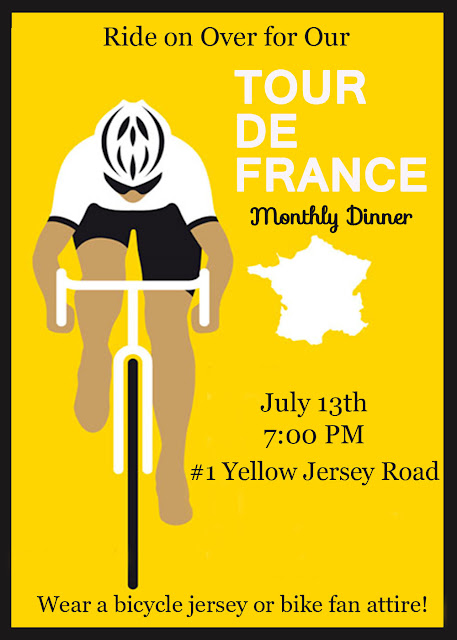 Invite: I designed the invitation on PhotoShop using a Tour de France poster image I found on the Internet.  Nothing super special to this invite sadly. 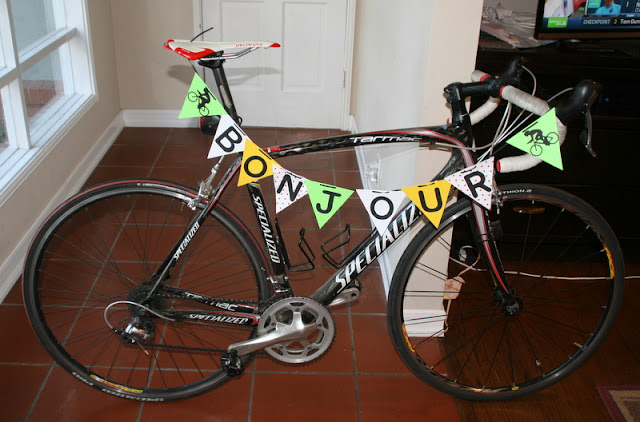 Entry: I knew I wanted to incorporate my husband's actual road bike into the decor, but wasn't sure how at first.  I decided on this simple entry.  I made a banner using scrapbook paper and my Cricut machine.  For those of you that don't know about cycling, the background papers represent the 4 jerseys that the leaders of each category from the previous stage wear wear during the next stage.  White with red polka dots is the King of the Mountain jersey; green represents the lead sprinter; white is the fastest overall rider under 25 years old; yellow is the overall leader of the race. 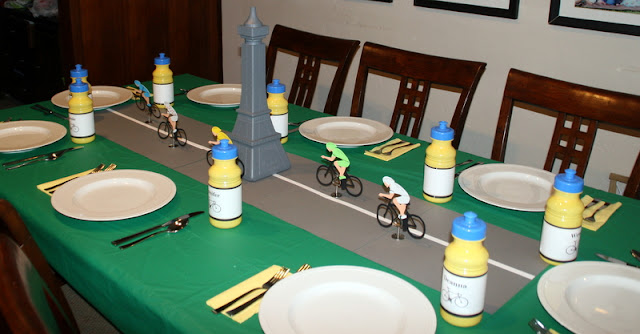 Inside Decor:  I created a street down the center of my table using card stock and used my Cricut to cut out cyclists in various jerseys. I also borrowed one of those giant Eiffel Tower drinking cups they sell at the Paris Hotel in Las Vegas from a friend of mine.  She didn't mind me spray painting it grey, so I did. 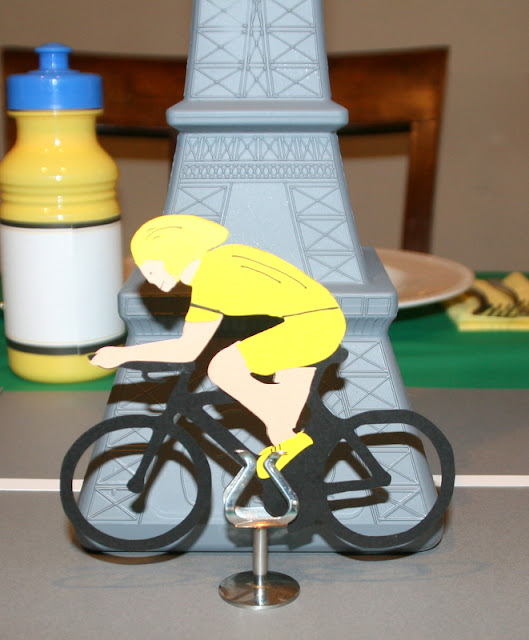 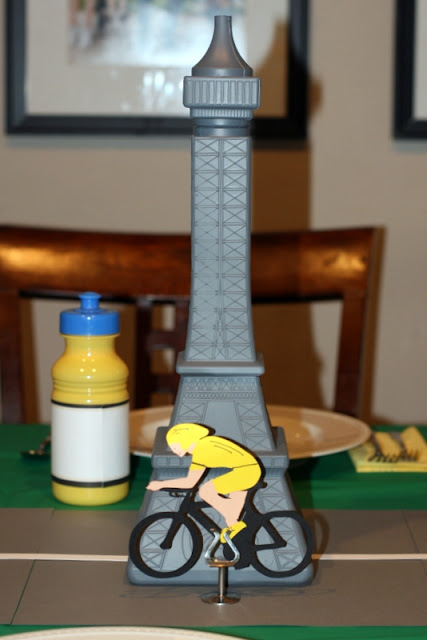 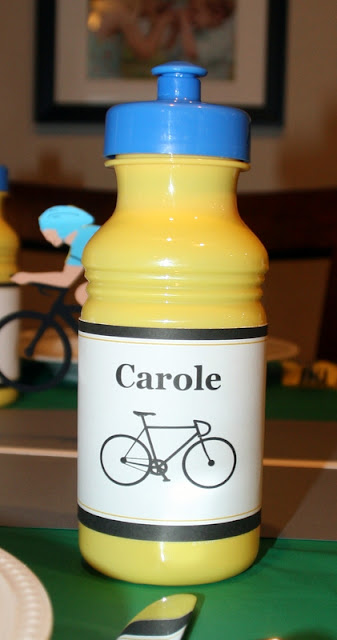 My original idea for place cards was to shape paper clips into bikes with large buttons as wheels.  After making one, my fingers were killing me, so I had to come up with another idea.  I bought these plastic water bottles from the Dollar Tree and made a simple label. Not super creative, but at least it goes with the theme. 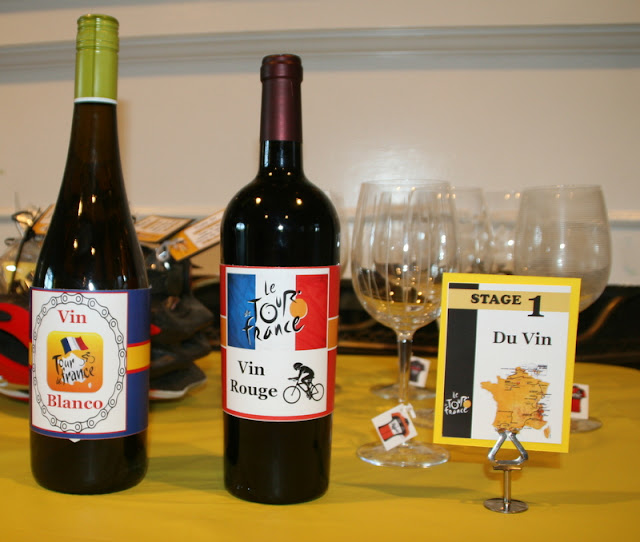 I made wine bottle labels on Photoshop to represent the theme and translated the white and red wine into French. My menu represented a few of the stages of the Tour de France, so since wine is always our first stop, it became Stage 1. 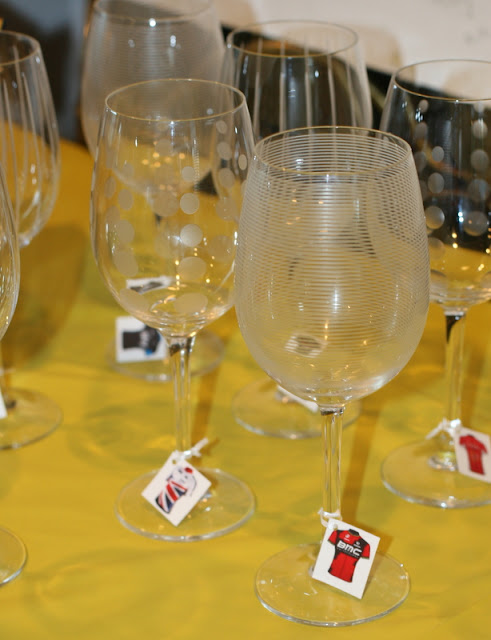 For wine charms, I used images of the jerseys of popular teams in the 2015 Tour de France. 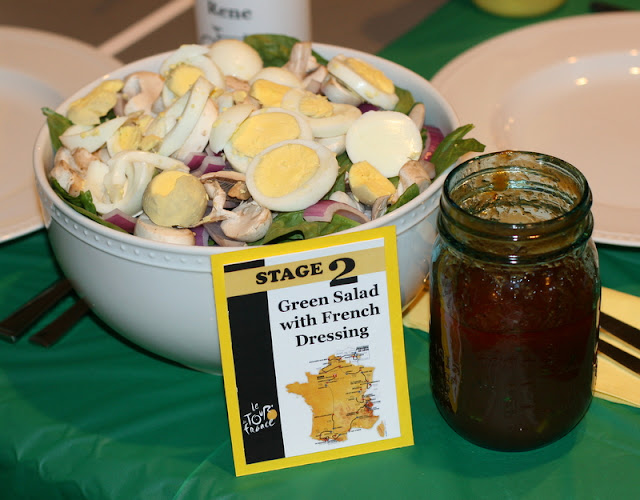 Menu: Since the Tour de France happens all over France, I decide to serve French cuisine.  Our starter was a spinach salad with French dressing.  This was Stage 2 of the race.  The salad was topped with red onion, mushrooms, bacon, and shredded cheese.  To make the dressing I mixed a 1/2 cup ketchup, 1/2 cup olive oil, 1/4 cup apple cider vinegar, 1/4 cup granulated sugar, and two green onions finely chopped (with tops). I am not normally a fan of French dressing, but this was tasty. 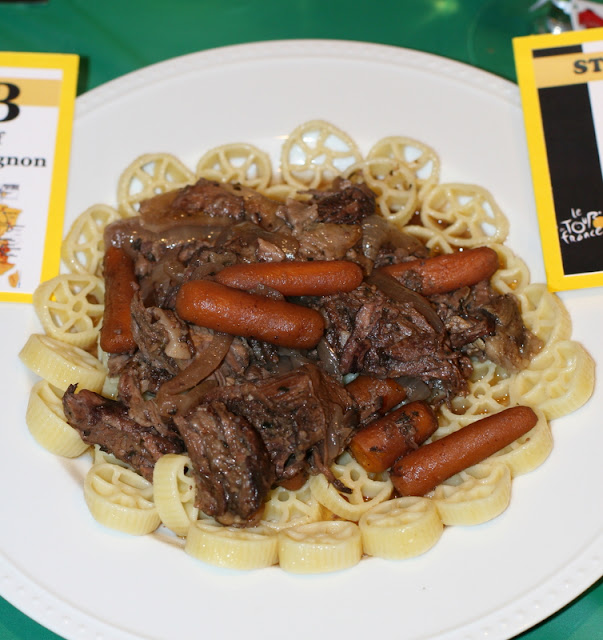 For Stage 3, I served Beef Bourguignon that I made in the crock pot.  I found the recipe here. It was very good.  If I were to make it again, I would thicken the sauce to make a gravy before serving. 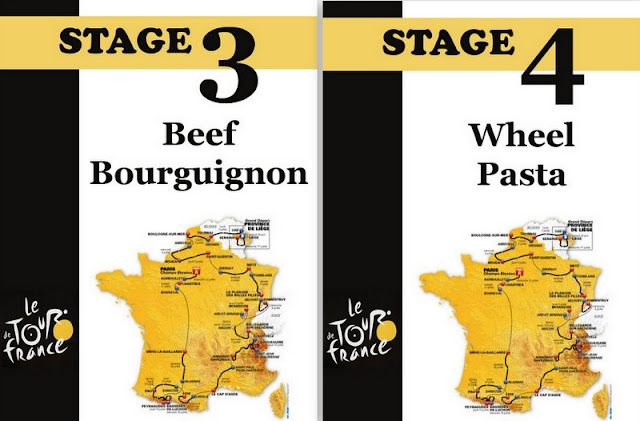 Normally I would serve the Beef Bourguignon with mashed potatoes, but since this was a Tour de France party, I served it over wheel pasta with butter.  It was "wheelie" good!

I have been wanting to make crepes forever, and my original plan was to make the entire meal crepes.  One of my guests recently found out she has a wheat allergy, so this changed that plan. I did make two different kinds for dessert though. 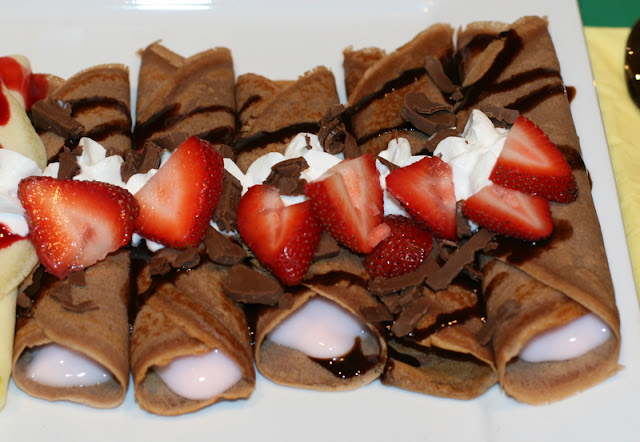 The first was a chocolate crepe.  I made them a few days before and froze them.  Inside, I put strawberry yogurt.  Then drizzled chocolate on the top with a dollop of whipped cream, some chocolate shavings, and a strawberry. 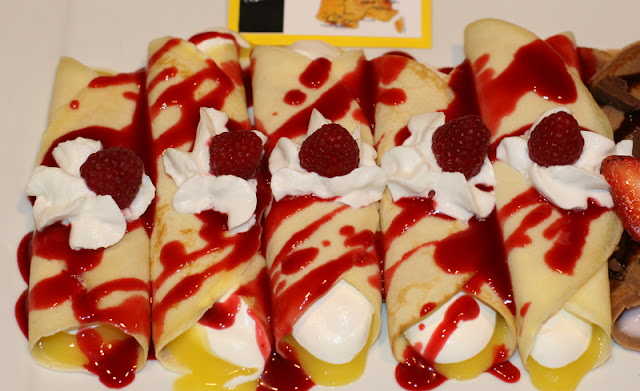 The second crepe dessert was AMAZINGLY DELICIOUS! These were Lemon Raspberry Crepes.  The inside is a lemon curd with whipped cream.  Outside is drizzled with a raspberry sauce and then garnished with a dollop of whipped cream and a fresh raspberry. I used a different recipe for the crepe, but the curd and sauce recipe I found at Buttercream Bakehouse. 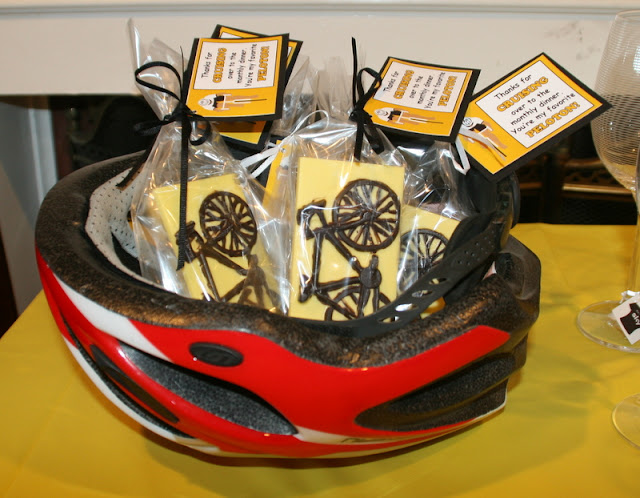 Favors:  I sent the ladies home with bars a chocolate with bicycles on them.  These took a while to paint the dark chocolate bike, but they were super cute.  I used my husband's bike helmet as a basket to display them.  The tag read: 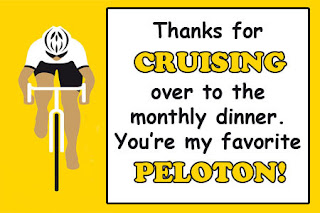 For those of you that are clueless about cycling (which some of my guests were too), a Peloton is the main field or group of cyclists in a race.

This was a fun theme.  Great if you are into cycling and Tour de France of course, but even if you aren't, try these recipes.  They were definitely something I would make again for my family.

Posted by InviteandDelight at 10:41 PM