With the passing of musical icon Prince this past month, the radio stations have been playing a lot of his music.  Hearing it brings me back to lip sync contests, dance team performances, and other fond memories from my junior high and high school days. I decided, Remembering Prince, would make a fun monthly dinner theme as well. 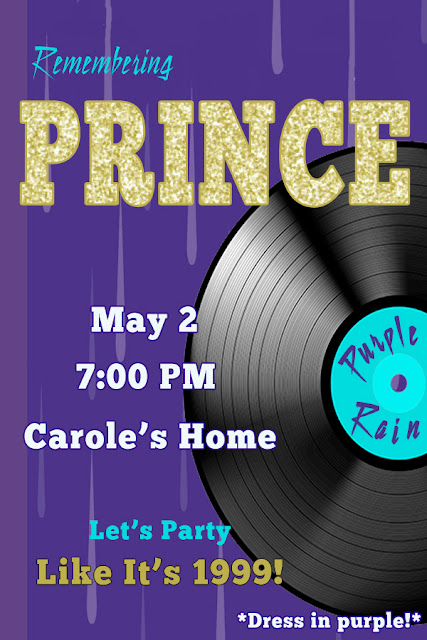 Invite:  A quick invitation I crafted on Photoshop.  I just learned how to make my font in glitter, so that made me super excited!  The Prince font is "Chunk Five Ex", and the Purple Rain font is called "Still Time".  Both are available for free download. 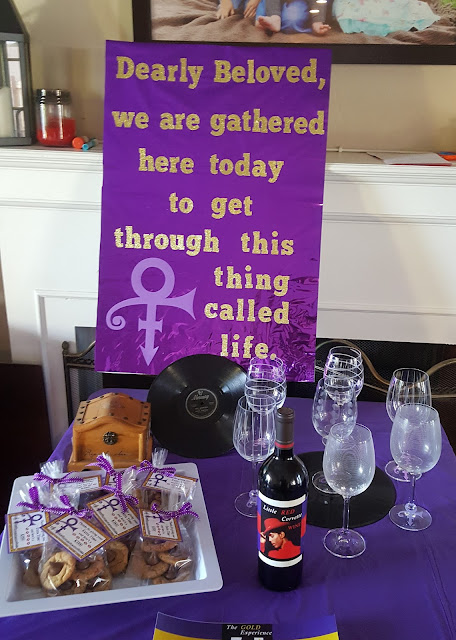 Decor: I initially  made this giant sign for my entry door, but decided instead to place it on my beverage table.  The metallic purple background is wrapping paper I found at the Dollar Tree.  The gold glitter letters and the purple Prince symbol I cut using my Cricut. The text is the opening lyrics to "Let's Go Crazy" by Prince. 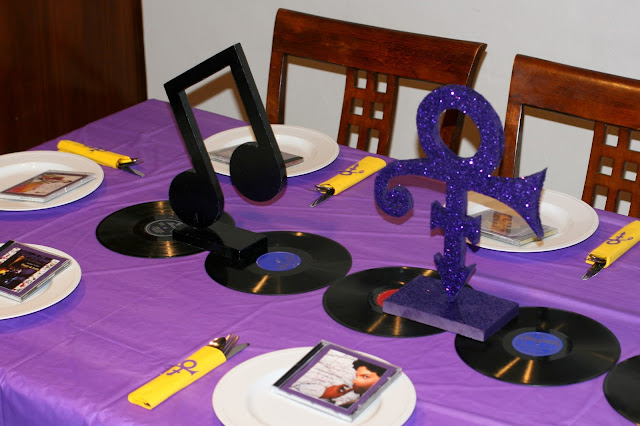 For the main table, I used a purple tablecloth with some old-school records I borrowed from my dad spread along the center to act as a table runner. Some wooden music notes and the Prince symbol were the centerpieces. 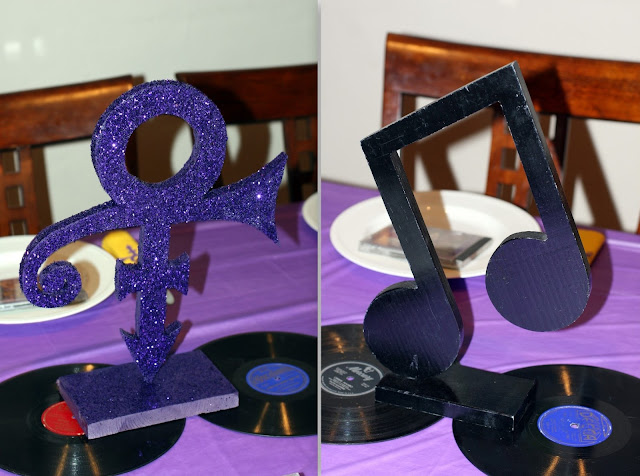 The music notes actually belong to my dad who has used them with the Community Concerts Association for years, but my talented (and helpful) husband made me the Prince symbol.  I traced it onto a piece of wood, and he cut it out!  I then spray-painted it purple.  After the second coat of paint, I added the purple glitter to make it really sparkle. 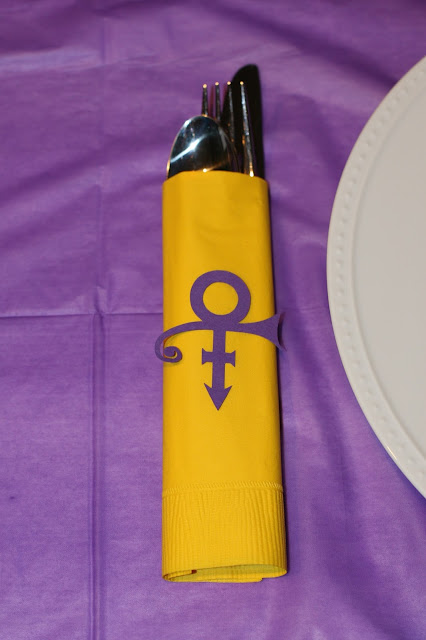 I added bright yellow napkins for color and used my Cricut to cut out the Prince symbol to place on top. 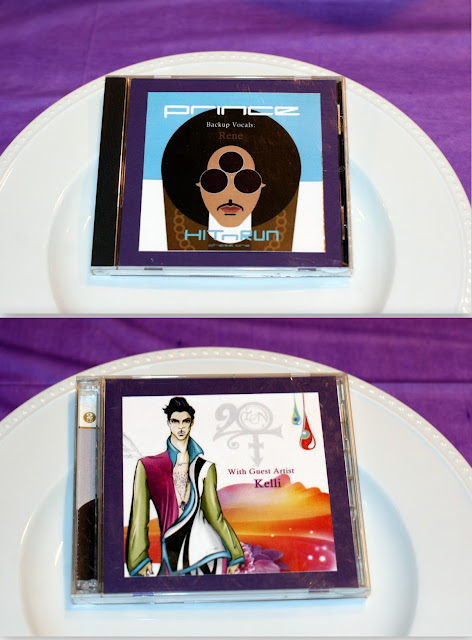 For place cards, I found images of Prince album covers online and added each guest's name as "background vocals" or "guest artist".  After printing the covers out, I backed them in purple card stock and placed them in CD cases. Add a burned CD of some great Prince songs inside to be a fun parting gift for guests.  Here's some of the other fun covers I used... 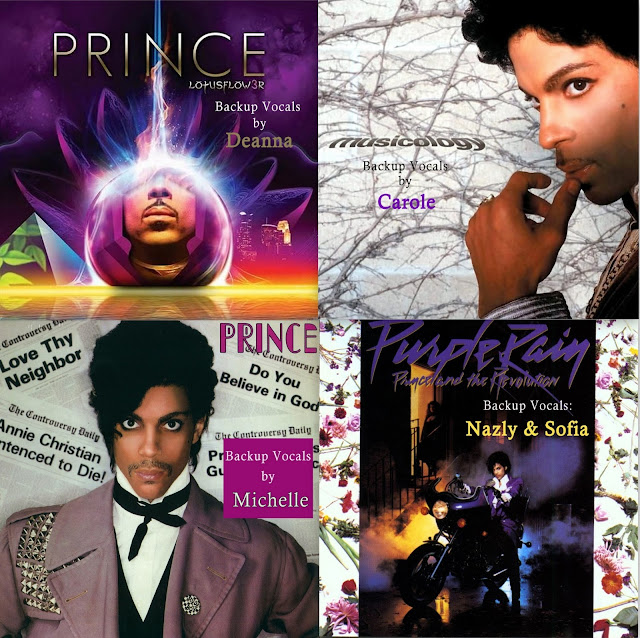 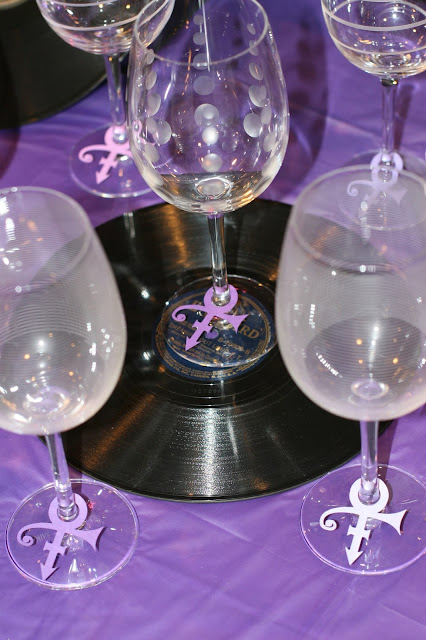 For wine charms, I again used the Prince symbol cut out of card stock.  I used various shades of purple for the symbols to distinguish the glasses. 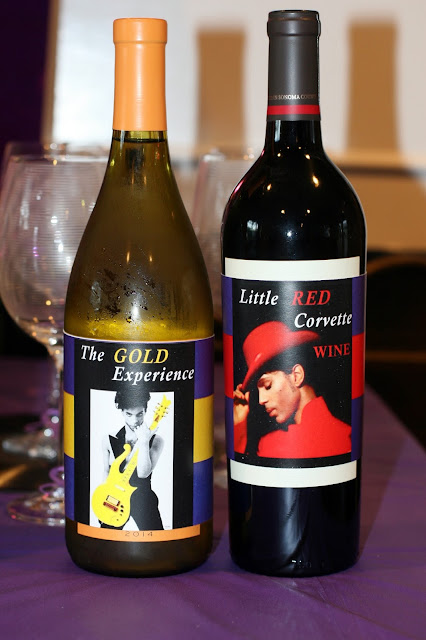 I made wine labels on Photoshop.  Prince doesn't have any popular songs with White in the title, but he did have a song called "The Gold Experience", so I used that as inspiration for the white wine label.  Then "Little Red Corvette" for the red wine. 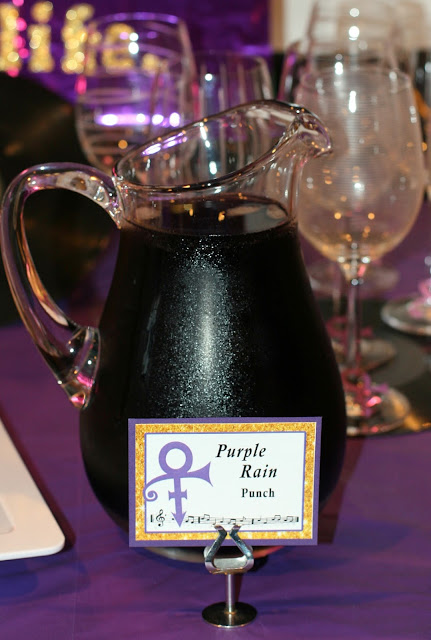 Not all my guests are drinking wine at this time (yeah for babies and soon to arrive babies!), so I also made purple Kool-Aid to drink. 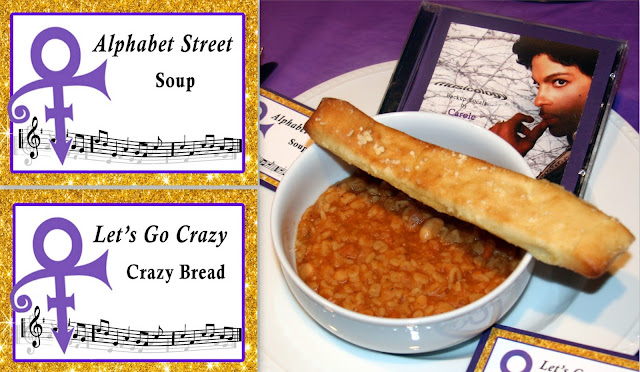 Menu:  To decide my menu, I pulled up a list of Prince songs and tried to find ways to creatively craft my menu around them. I started with an alphabet soup after Prince's song "Alphabet Street."  I found the recipe for this healthy soup at Food.com here.  I made some variations to the recipe (on accident mostly), so mine did not come out with as much broth as the original recipe which made it thicker.  Sometime I'd like to try the recipe again exactly the way it is written.  For the breadstick, I bought Crazy Bread from Little Caesars Pizza (no prep for me!).  This went with Prince's song, "Let's Go Crazy." 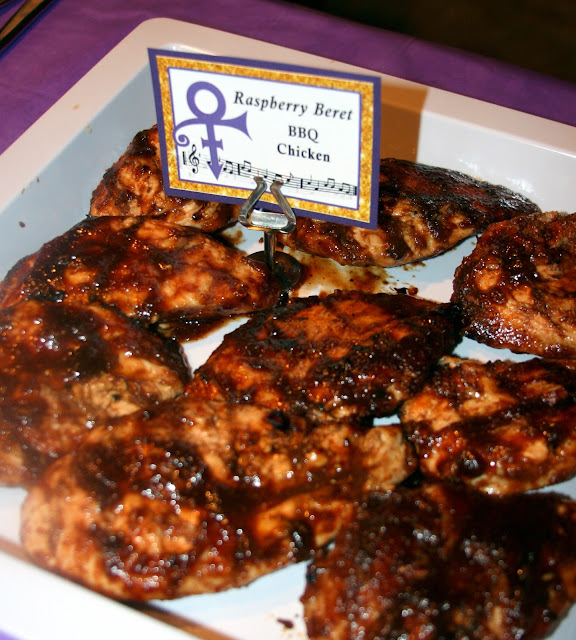 I grilled BBQ chicken for my main dish, but instead of using a normal BBQ sauce, I found a recipe for Raspberry BBQ sauce on SmokingPit.com. It was super sweet with our first taste test, so my friend added some extra spices which made it taste perfect. This represented the song "Raspberry Beret." 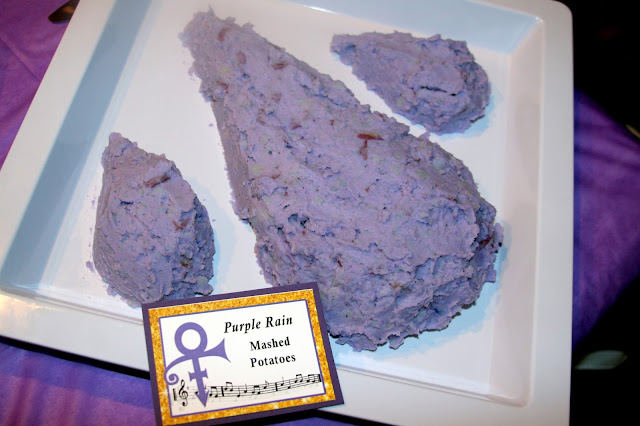 I dyed mashed potatoes purple for "Purple Rain."  We shaped them into rain drops for added fun. 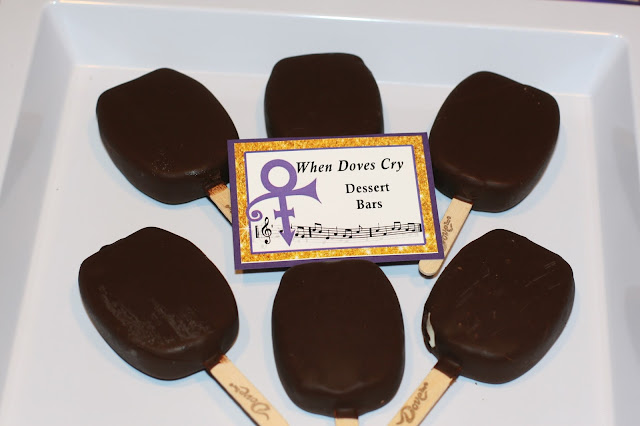 For dessert, I bought Dove ice cream bars for the song "When Doves Cry."  I don't know that I have ever had a Dove ice cream bar before, but those things are tasty!  I feel a bit guilty not hand-making the dessert, but it definitely was easy just purchasing them at the store and having dessert taken care of! 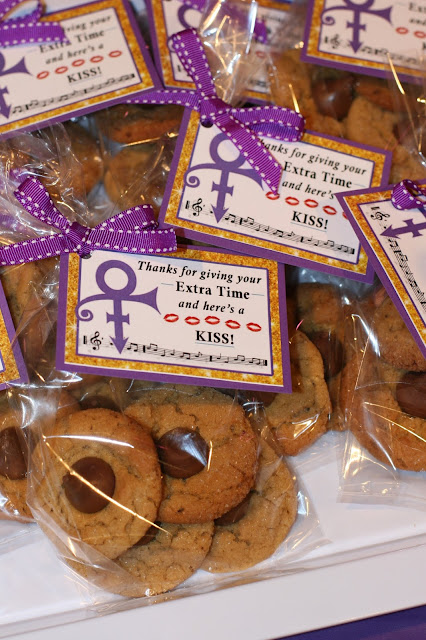 Favor:  I made Hershey Kiss cookies for a parting gift.  These are one of my favorite cookies, so it worked out perfectly that it went with Prince's song "Kiss."  I wrapped 4 cookies in a baggie and designed a tag using the lyrics from the song (with only minor alterations).


Hope you enjoyed this Prince-inspired party!

Posted by InviteandDelight at 8:38 AM