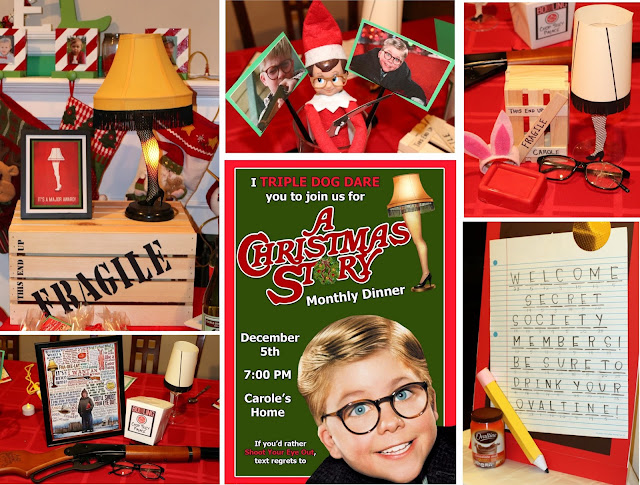 My favorite movie of the Christmas season is A Christmas Story.  How can you not feel for Ralphie when mom makes him put on that bunny suit? Or when everyone tells him "you'll shoot your eye out" every time he excitedly tells them about his desire for a Red Ryder BB gun? And come on...you know you want a giant leg lamp in your front window for the neighbors to see your MAJOR AWARD!  If you haven't seen this classic movie, do yourself a favor and watch it this Christmas Eve when it plays in the 48 hour marathon. 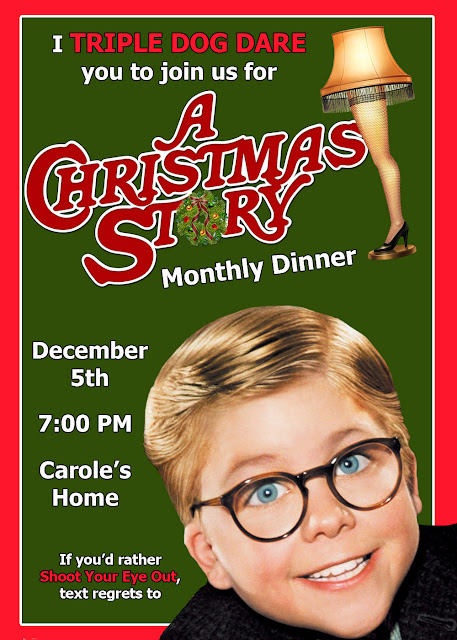 Invite: I designed the invitation based on a poster for the movie, but added the leg lamp. I tried to tie in some of the well-known movie quotes in the text. 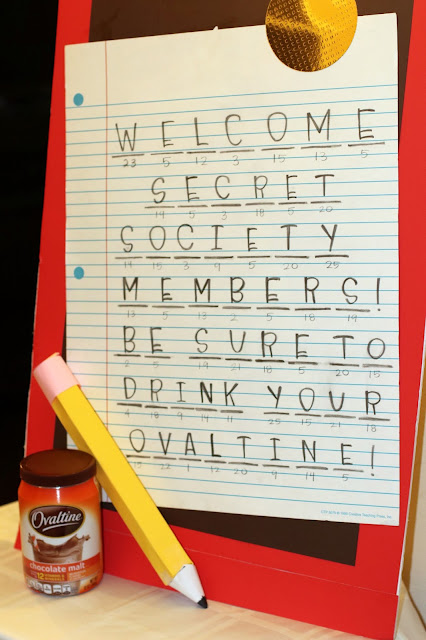 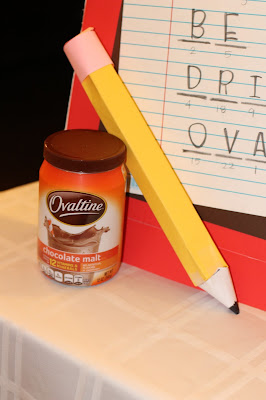 Entry Decor: In the movie, Ralphie sends away for a Little Orphan Annie decoder ring.  He listens to the Little Orphan Annie show regularly and anxiously awaits the decoder ring's arrival.  When it arrives, he decodes the message and is disappointed that it basically just tells him to "Be sure to drink your Ovaltine."  Turns out its just a gimic and advertisement.  For my entry sign, I created an alphabet/number code like the one in the movie.  I added a "Welcome Secret Society members" message to the decoded message.

I also made a giant pencil out of construction paper and set it with a jar of Ovaline. 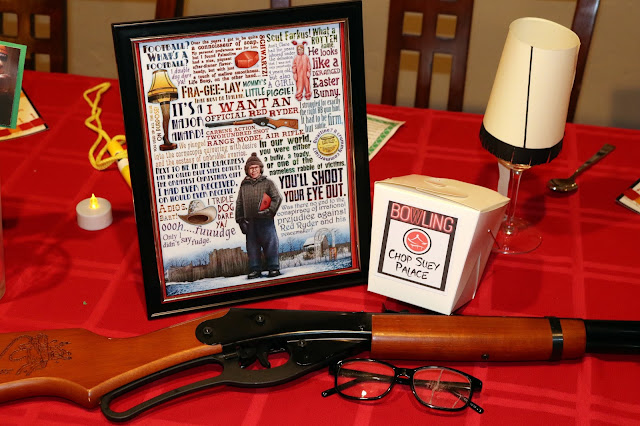 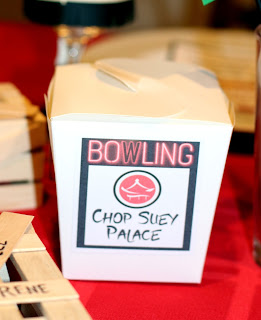 Decor:  For the centerpiece, I had a Red Ryder BB Gun, broken glasses, a Chinese to-go box, and a frame with various quotes from the movie.  I designed the Chinese box based on the movie. In the movie, Ralphie's family is forced to go to a Chinese restaurant on Christmas since its the only thing open and their delicious turkey meal has been destroyed by the neighbor's dogs.  The restaurant is next to a bowling alley, but Ralphie's dad thinks "Bow-Ling is the name of the restaurant because the neon W is out on the sign for the bowling alley. 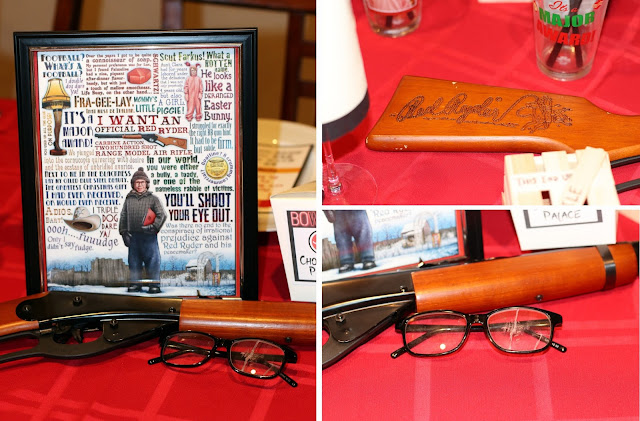 I bought the glasses at the dollar store, and then used a hammer to crack the them.  My husband owns a Red Ryder BB gun, so I just borrowed that from him. 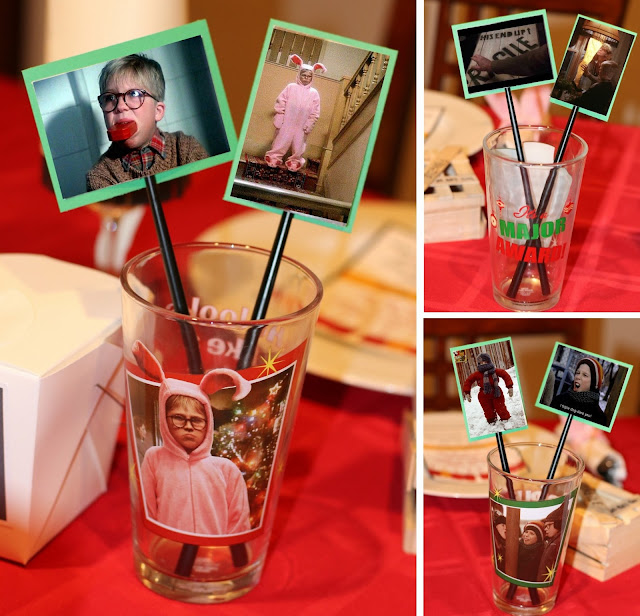 I also placed A Christmas Story pint glasses on the table.  I attached photos from the movie to chopsticks to place in each glass. 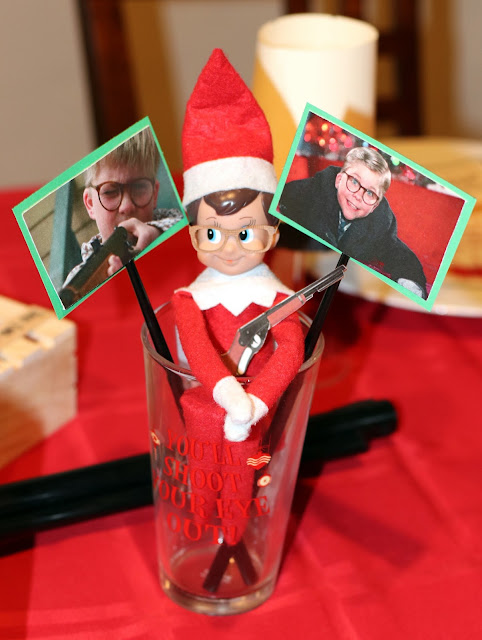 Our Elf on the Shelf "Jake" was added to the fun as well.  Jake had glasses and a Red Ryder BB gun just like Ralphie. 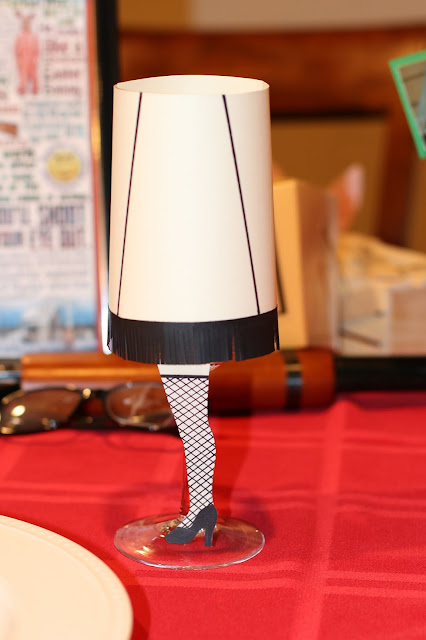 Check out these leg lamp wine glasses! I made these out of scrapbook paper and placed one at each place setting!  The lamp shade was just lifted off when it was time to drink from them. 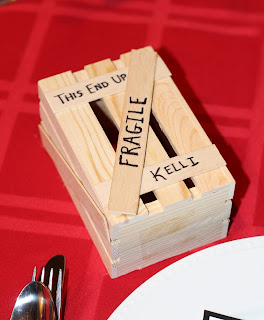 For placecards, I made FRA-GEE-LAY boxes! (The leg lamp in the movie came in a wooden box like this, and Ralphie's dad doesn't pronounce fragile correct. He thinks  it's pronounced FRA-GEE-LAY and that "It must be Italian!")  I bought wooden boxes at Michaels and the cut tongue depressors to glue to the sides and top. 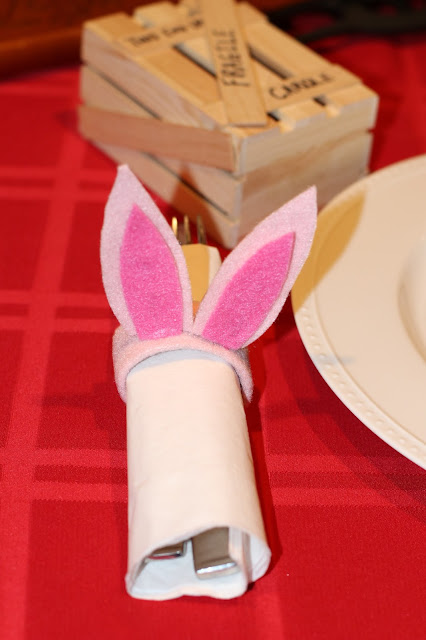 In the movie, Ralphie gets a bunny suit from his aunt for Christmas.  I made bunny ear napkin rings to tie in this part of the movie.  To make them, I cut toilet paper rolls, and then hot glued pink felt around them and into ears on the top.  I used pipe cleaners in between the light and dark pink of the ears to make them stand up. 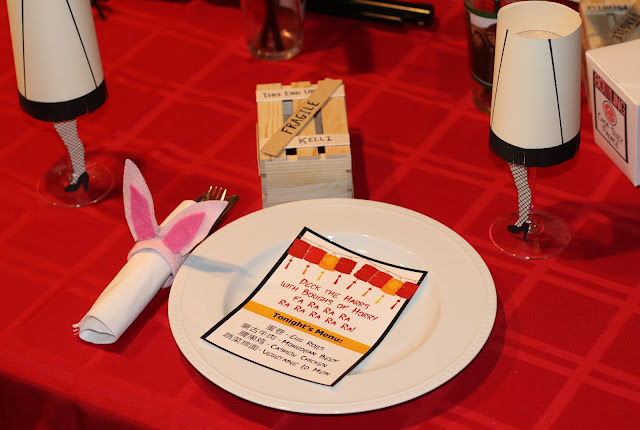 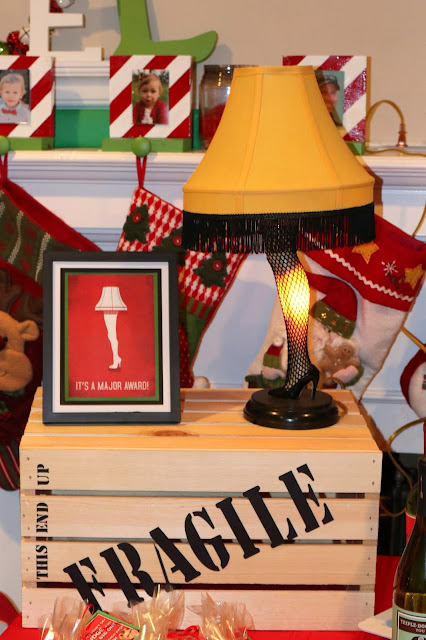 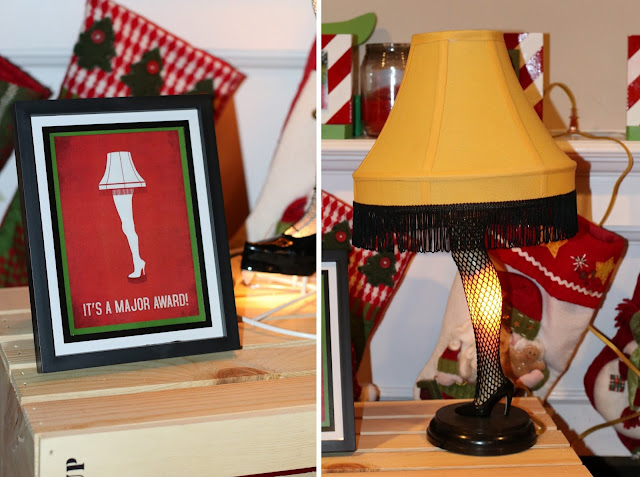 I borrowed a leg lamp from a friend to decorate my side table and made a sign with "It's a Major Award" - a famous quote from the movie. 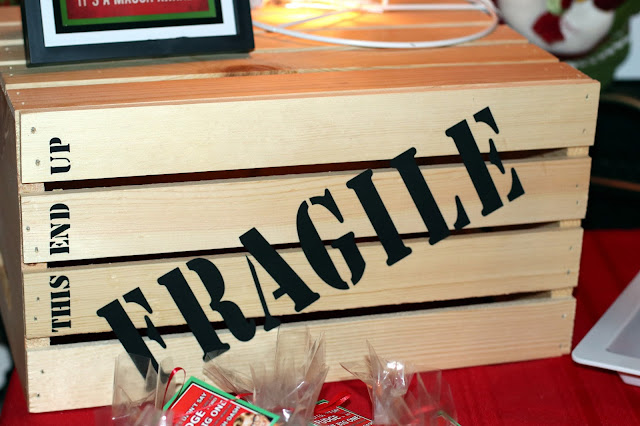 I bought a crate from Michaels and used scrapbook paper to glue stencil letters to say "Fragile" and "This End Up." 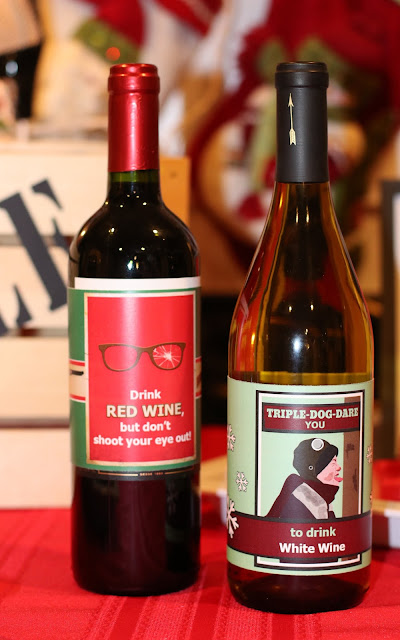 I made wine labels with sayings and images from the movie. 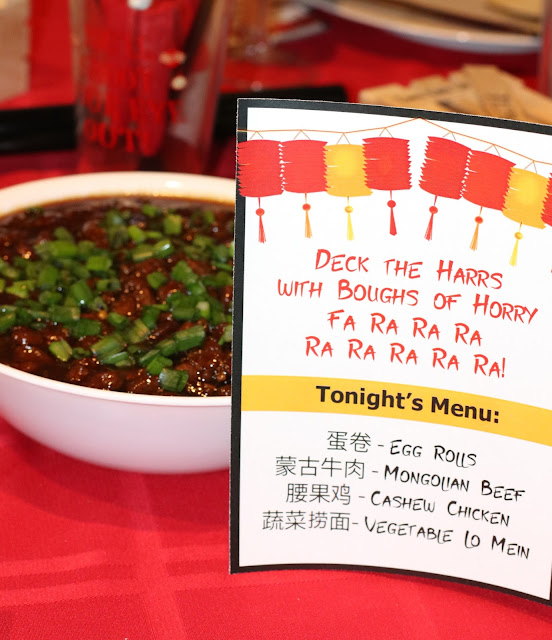 Menu:  I created this menu for each place setting.  The "Deck the Harrs" lyrics are what the Chinese restaurant employees sing to the Parker family.  Their accents make it difficult for them to pronounce certain words. 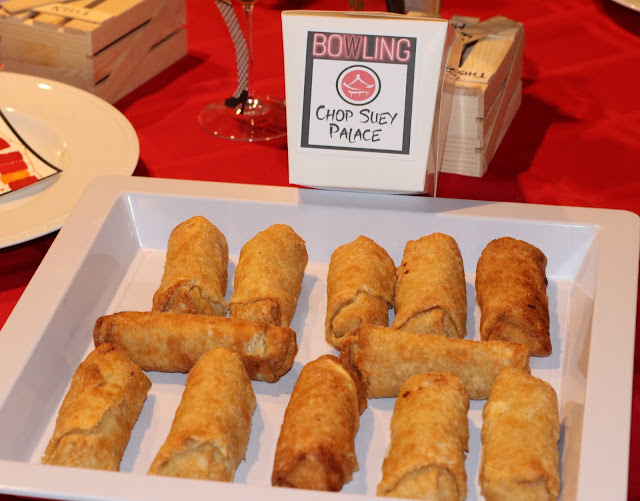 We started with Egg Rolls that I purchased from the grocery and just had to cook in the oven prior to serving. 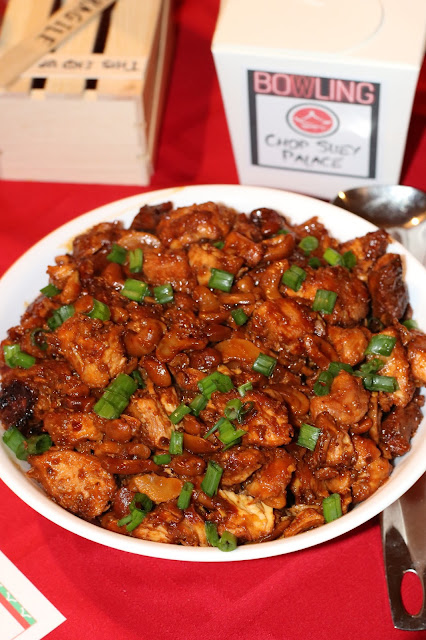 Next was Crock Pot Cashew Chicken. It was super easy to make and yummy too. 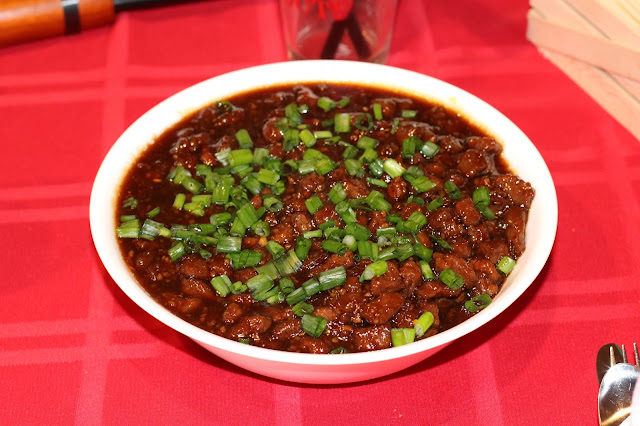 I also made Mongolian Beef. 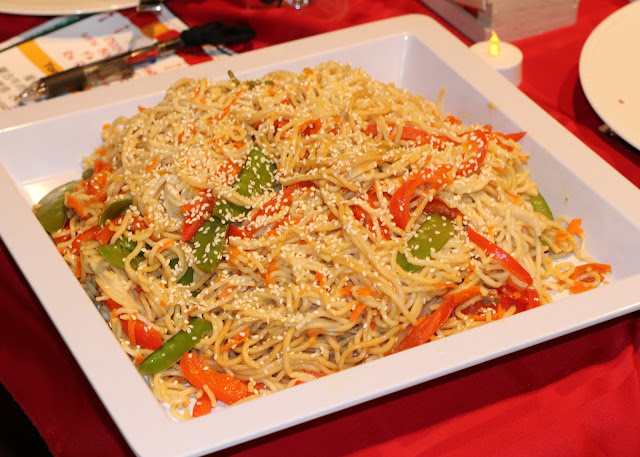 And a vegetable chow mein that was delicious. 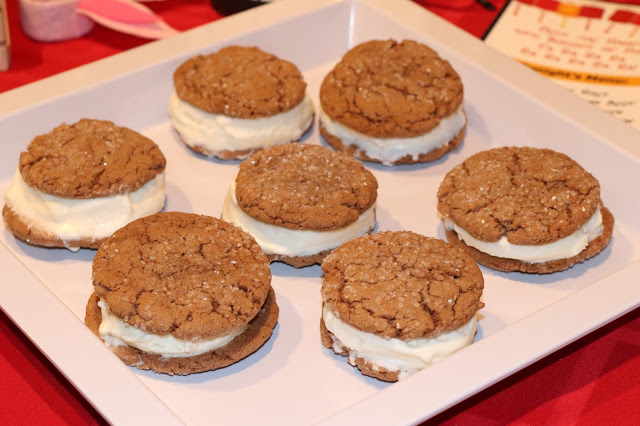 For dessert, I made Ovaltine cookies! I made them into ice cream sandwiches for extra fun.  Ralphie's gotta drink his Ovaltine right?! 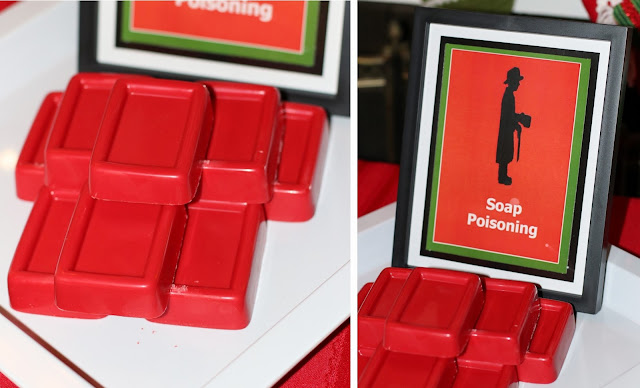 Favor:  I made a couple items for guests to take home.  When Ralphie cusses and says the F-word in the movie, his mom makes him put a bar of red soap in his mouth.  He later has a dream that the soap poisoned him.  I bought a soap mold and used red chocolate melts to create "soap" bars. 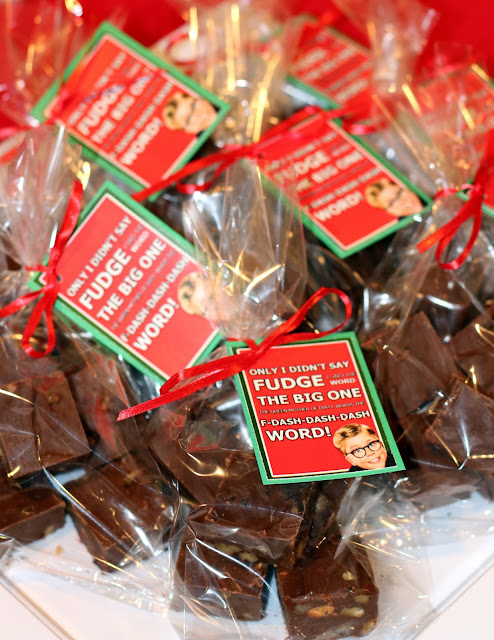 I also made Rachel Ray's 5-Minute fudge to give to each guest.  The tag was another quote from the movie. 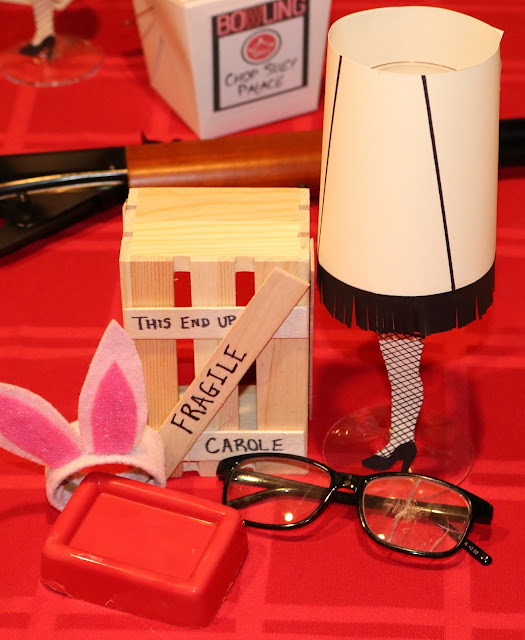 Another photo of some of the details. 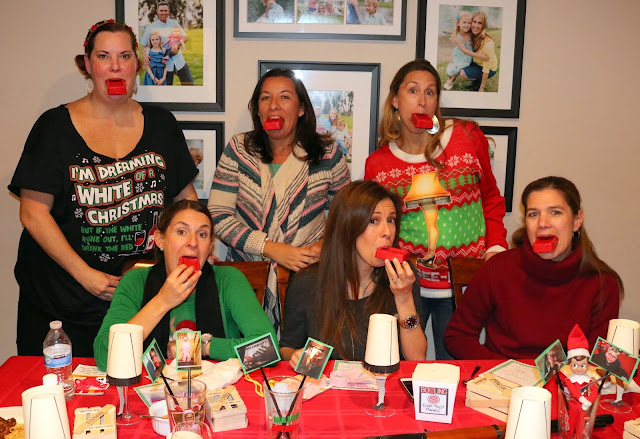 This party was so fun.  We had a blast!  I even have my ugly Christmas sweater with a leg lamp!

Have A Christmas Story party of your own this year!

Posted by InviteandDelight at 1:14 PM

I have to tell you that I've wanted to host an A Christmas Story party for several years but I want to serve Meatloaf Meatloaf Double Beatloaf and mashed potatoes and glasses of milk :) The soap chocolates are a great idea! I think maybe I might need to throw something together for next week. Thanks for the inspiration!