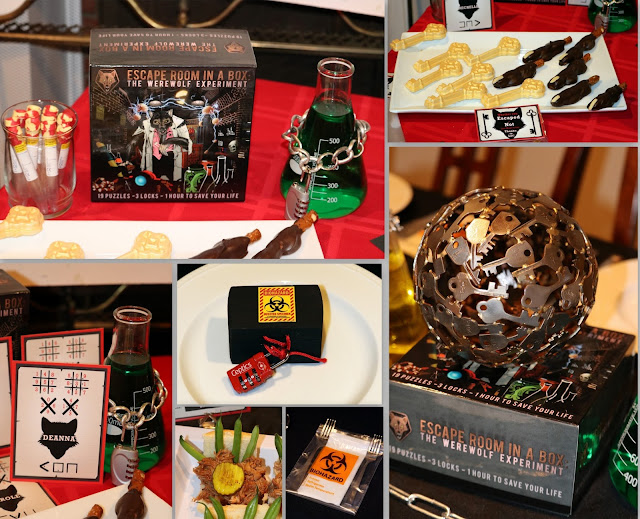 Escape Rooms are a huge trend right now, and they are popping up all over the place with good reason.  I have been to two different escape rooms this year, and they are SO much fun!  What are they you ask?  They are interactive adventure games where typically participants are locked in a room, and they must work together to solve fun and challenging puzzles before time runs out.  I wanted to create an escape room in my own home for the monthly dinner this month. This is a daunting task to write it all yourself, but lucky for me, Juliana & Ariel came to the rescue! These two ladies are the co-creators of a new table top game, Escape Room In A Box.  They contacted me about putting together a party planner to be included in their game, and I can't wait to share with you (and them) what I came up with! 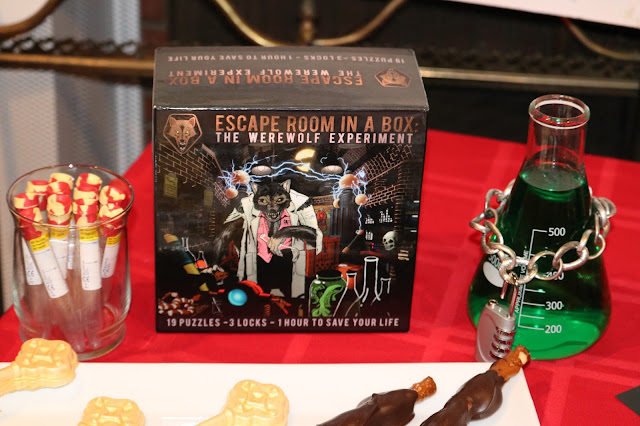 The game is about an evil mad scientist werewolf who is trying to turn you into a werewolf too.  You will see that werewolf aspects, science/medical tools, locks, and chains were incorporated into much of my decor and food. 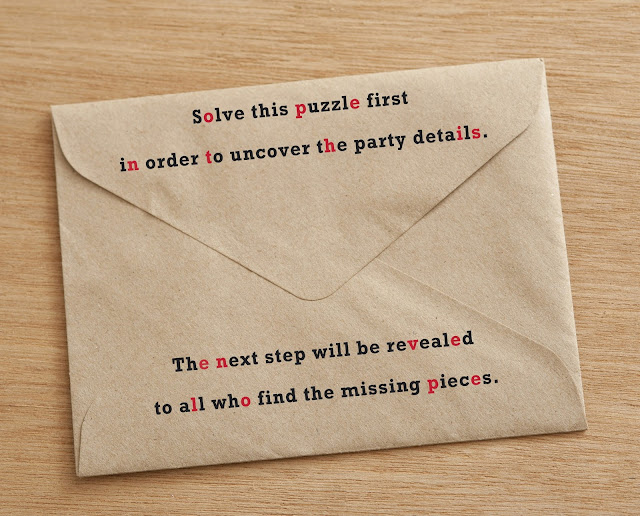 Invite:  My guests encountered an initial puzzle when they first received their invitation.  At this point, they did not know the theme or anything yet.  I just included this for fun with the intention of making the puzzle pretty easy to decipher. (I'm sure you figured it out, but if you use the red letters only, they form a message.) 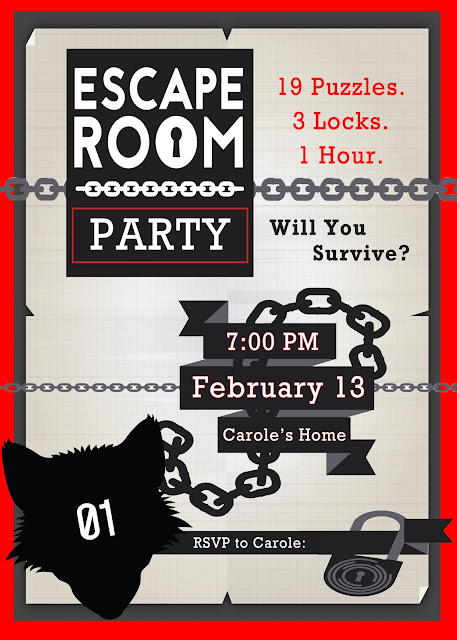 I designed the invitation using PhotoShop. I wanted to include the Escape Room in a Box phrase of 19 Puzzles. 3 Locks. 1 Hour, because it lets guests know a little bit about what to expect. 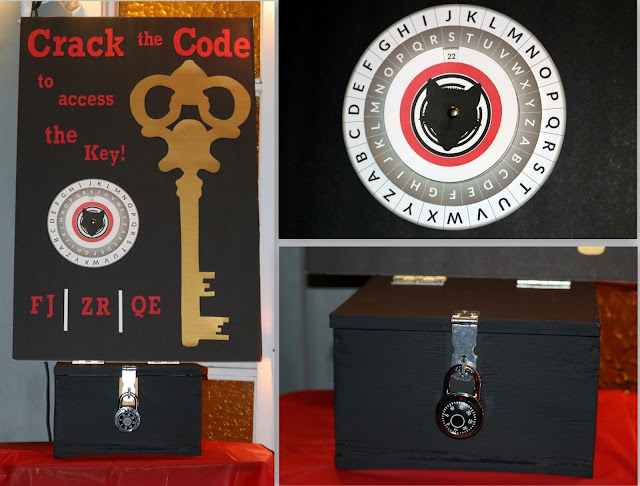 Entry:  As guests approached my door, they were met with their first puzzle.  I used poster board to make a sign with a large gold key and a decoder wheel.  In order to get in the front door, they had to solve the puzzle, use the puzzle's solution to open the combination lock, and inside the box was the key to my front door! I used a combination lock I already owned, so I just matched the code to the existing combination. 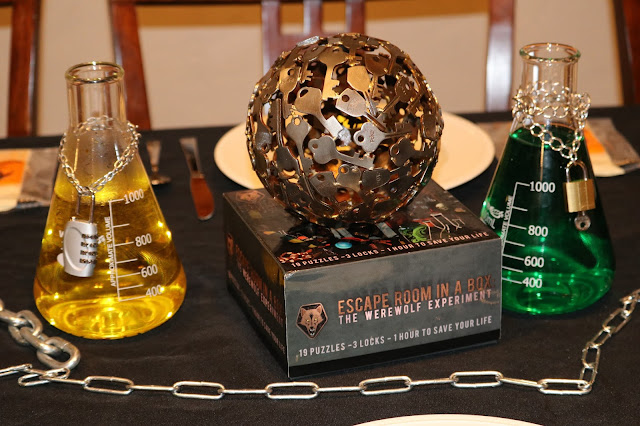 Inside Decor:  I kept with a color scheme of black, grey, cream, and red to match the invitations.  Throughout the party areas, I placed science beakers that I borrowed from a teacher at my school. I filled them with water and food coloring. You could add dry ice to give them even more pizazz.  I used pieces from some of my Premier Designs necklaces to wrap around each beaker to look like chains.  I added locks I found at a thrift store for $1 to each chain. 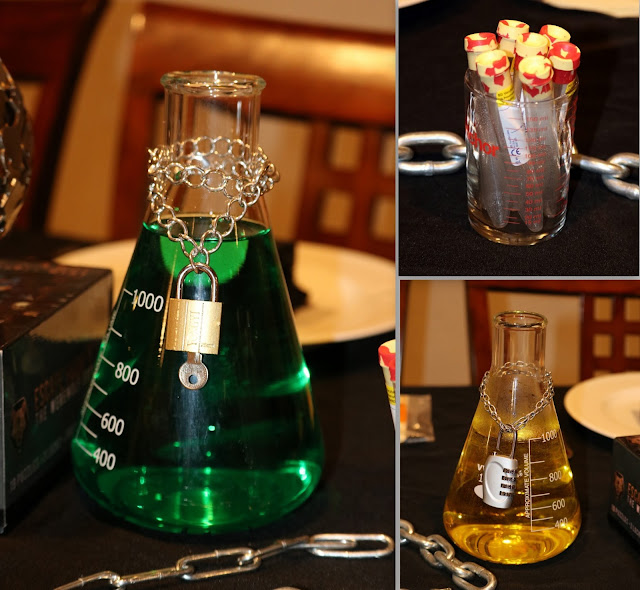 I also placed chains along the table and some medical viles I borrowed for a nursing friend of mine. 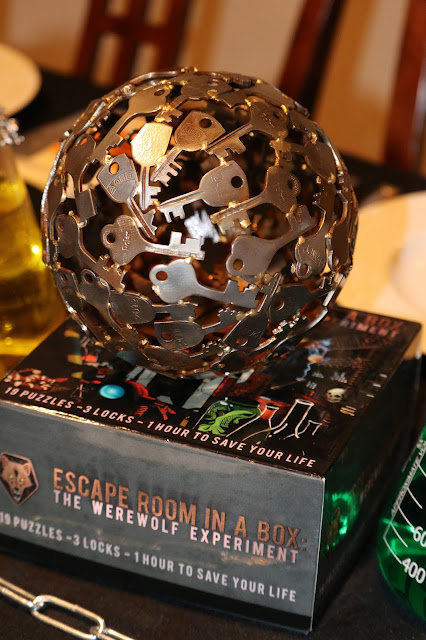 For the centerpiece, I used the Escape Room in a Box game, and this super cool sphere made of keys!  I randomly found this piece on clearance for $4 at Marshall's the week before my party!  SCORE! 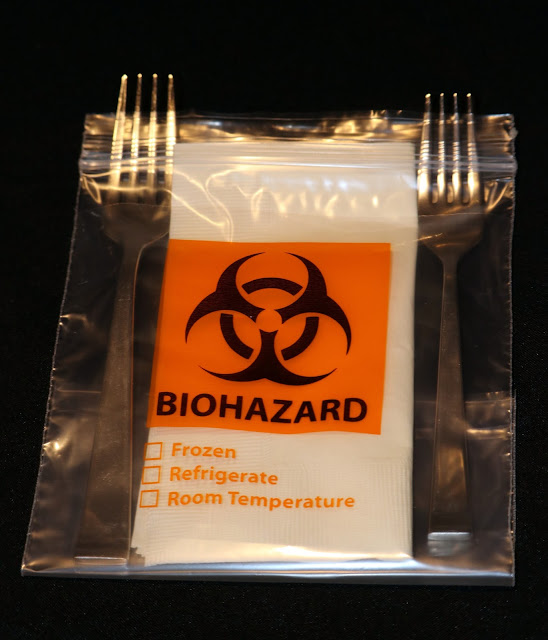 My nursing friend also gave me some biohazard bags that I decided to use to hold the napkin and utensils. You can purchase these on Amazon if you don't have a source who can get them for you. 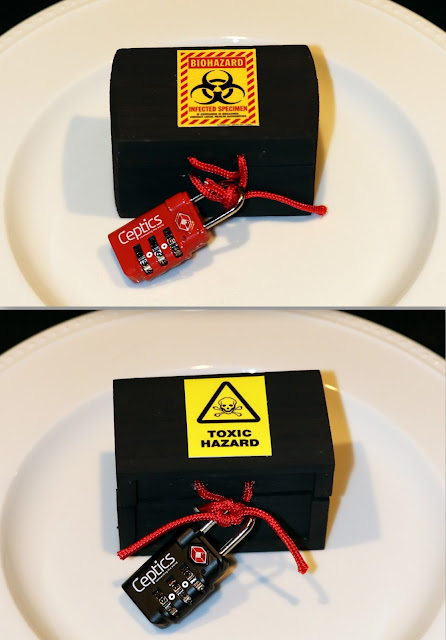 I always do place cards for my dinner parties, but I wanted this one to incorporate a puzzle.  I decided to make these little lock boxes. I bought the boxes for $1 a piece at Michaels, removed the clasp, drilled bigger holes, and painted them black.  I printed off various science-related warning signs and glued one to the top of each box.  I then knotted red cording through and placed a combination lock on it.  I wasn't able to find this kind of lock at the thrift store, so I purchased them on Amazon here. 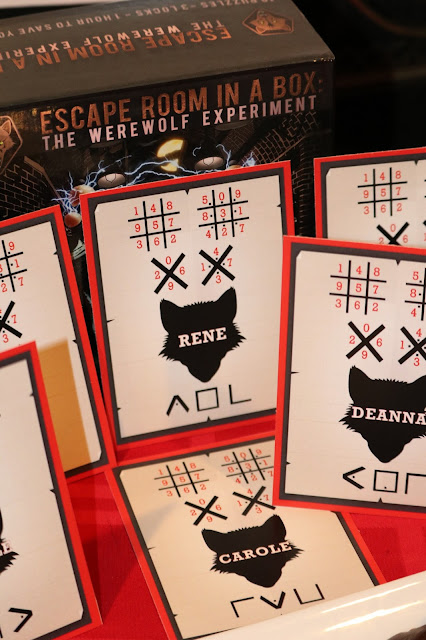 When it was time for guests to find their seat, they were each given a puzzle card with their name on it.  I created these on the computer and personalized them for each guest. 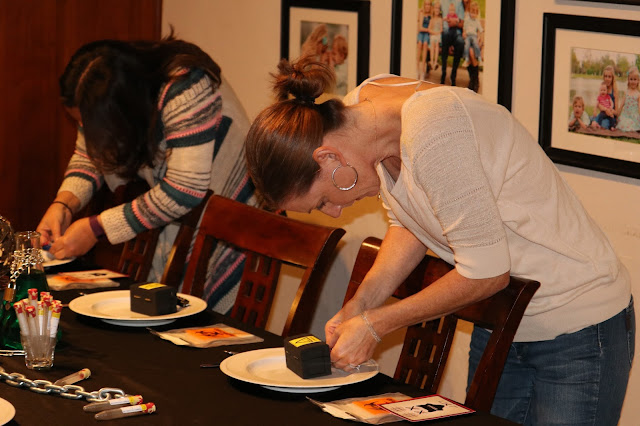 When they solved the puzzle, it revealed to them a 3-digit code.  Each guest then had to test their code on all the place card boxes to find which box/lock was opened with their particular code! Seriously....so fun! 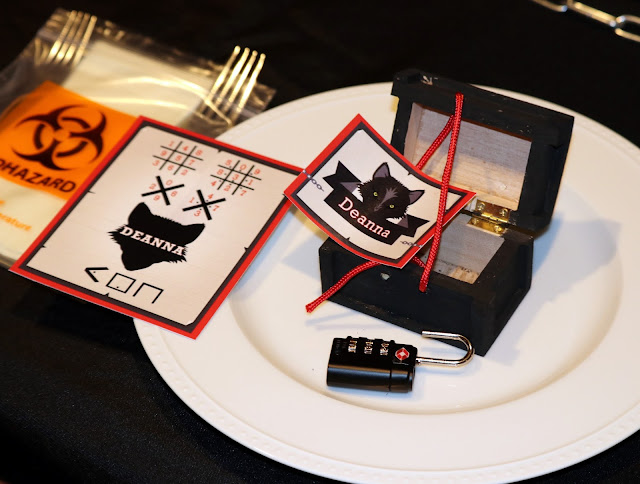 Once open, the guest's place card was inside. I made the place cards using Photoshop.  Each one was different. 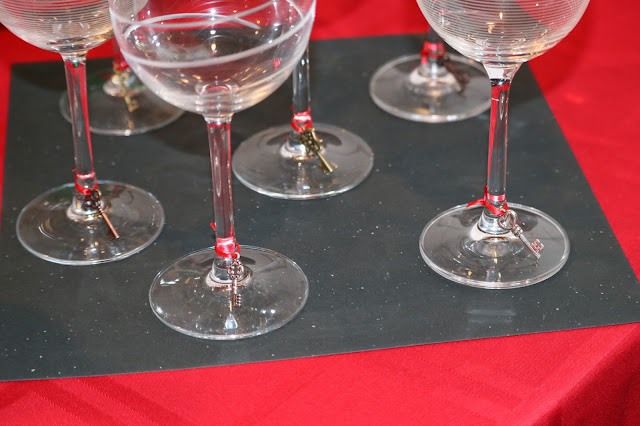 For wine charms, I bought small little keys in the jewelry-making section of Michaels.  I tied them around the stem of each glass with ribbon. 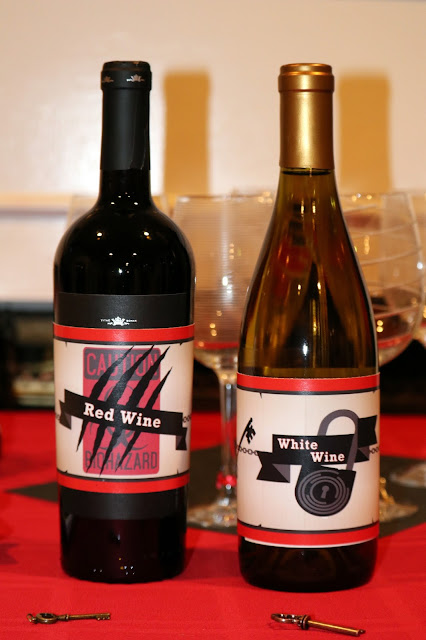 I created the wine bottle labels using images from Escape Room in a Box so they matched the rest of my decor. 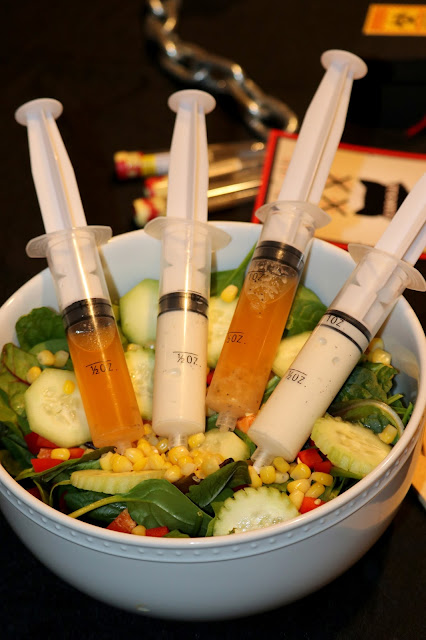 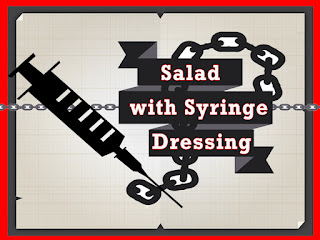 Menu:  If you are regular follower of my blog, you know that I like my food to match the party theme. This party is no exception.  I started the evening with a green salad, but served the salad dressing in large syringes to keep the medical/science theme of the game.  These were large syringes from Party City that are normally used for "shots". (I used these same syringes for spaghetti sauce at my Fake an Injury Party in 2012.) 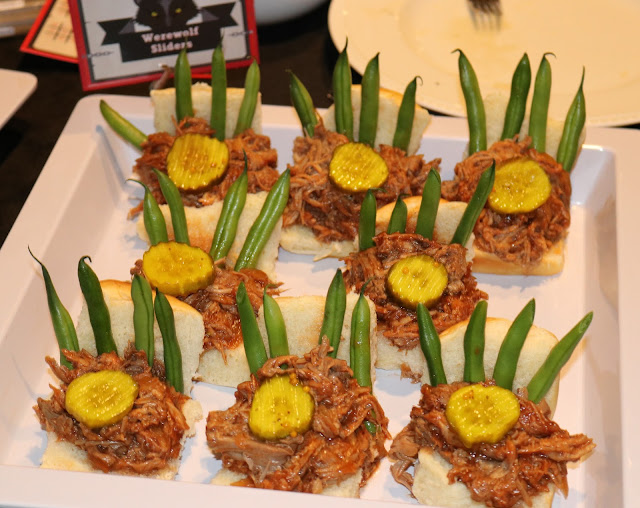 For the main dish, I served Werewolf Sliders.  These were made to look like werewolf claws.  Here is the recipe for this yummy dish. 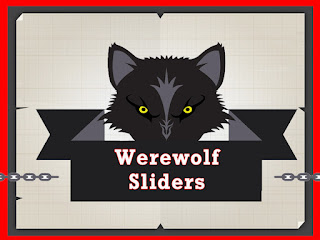 1.  Place the diced onions and garlic in an even layer in the slow cooker and pour the chicken stock over the top.
2.  Combine the sugar, chili powder, cumin, cinnamon and salt and pepper in a small mixing bowl. Rub the sugar and spice mixture over the pork and place the meat on top of the onions and garlic.  Place the lid on top of the slow cooker and cook until the pork is tender, about 6 to 8 hours on high or 8 to 10 hours on low.
3.  Remove the pork from the slow cooker and place on a cutting board. Set a strainer over a medium sized bowl and pour the remaining contents of the onion mixture through the strainer and return the solids to the slow cooker.  Using 2 forks, shred the pork into bite-sized pieces. Return the shredded meat to the slow cooker and add the KING'S HAWAIIAN Original Sweet Pineapple BBQ Sauce. Mix the sauce and meat together.
4.  Slice KING’S HAWAIIAN dinner rolls in half; separate top half from bottom half. With the open side facing up, place spoonful of BBQ pulled pork on top.
5.  Place a slice of bread & butter pickle onto center of pulled pork.
6.  For the claws, place four of the 2 inch cut green beans onto each roll. 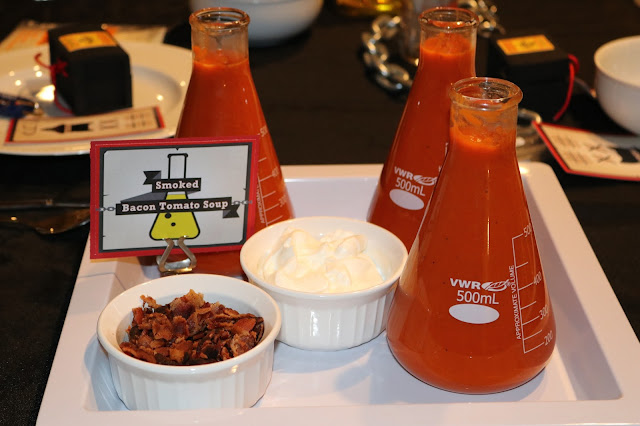 I also served a Smoked Bacon Tomato Soup that was absolutely AMAZING! I found the recipe on Pinterest and decided to try it out.   The ingredients are: 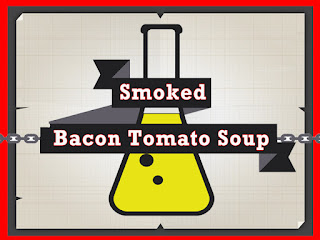 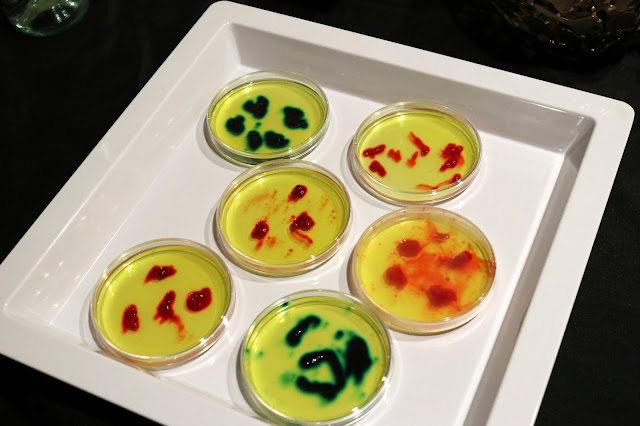 I also made petri dish jello.  Poured the jello in and waited until it had set up just a little bit before adding drops of food coloring.  I found the petri dishes on Amazon. 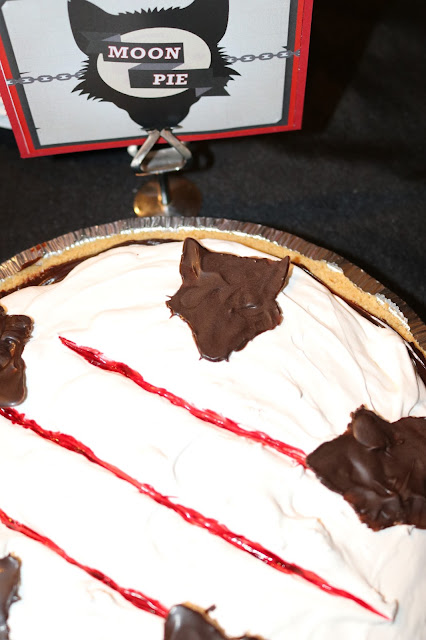 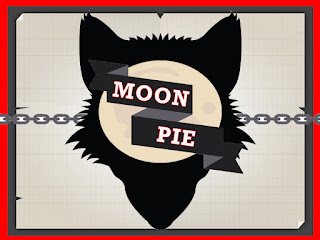 For dessert, I decided to make a Moon pie. The recipes I found online for moon pies were for individual pies, but I wanted something a bit easier.  I basically just invented this pie based on the same ingredients as the individual versions.  It was a graham cracker crust topped with chocolate fudge.  On top of that, I put marshmallow cream mixed with cool whip.  I used  red gel frosting to make the wolf slash marks on the top.  I melted chocolate and used a paper stencil of the same wolf's head from the game to make the chocolate pieces to place on top. 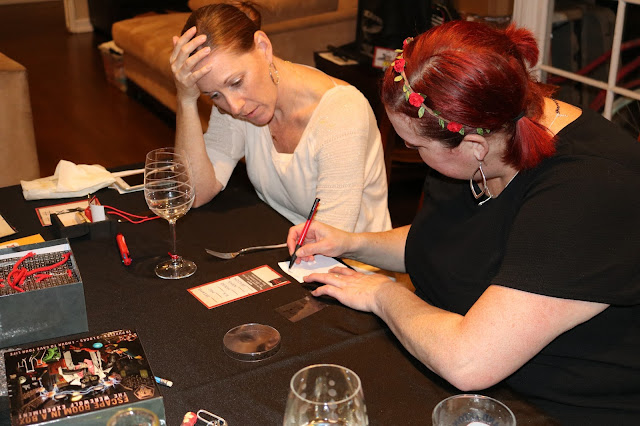 Activity:  After the meal, we put our thinking caps on and began to play Escape Room in a Box.  I won't show you photos of this (beyond this first one after opening the box) as I don't want to spoil your fun.  The great part about this game is not only that it is challenging and fun teamwork, but I personally loved that as the hostess, I could play too! I didn't know any of the answers or what to expect since Juliana & Ariel, the creators of Escape Room in a Box, did all the work for me!  I think it would be great to have about 5-6 people working together to solve this game.  I had a few guests that had to leave partway through, which made it even more challenging, but we powered through to the end! Lucky for us, we were able to use the included "hint book" to help us the couple of times we were stuck. 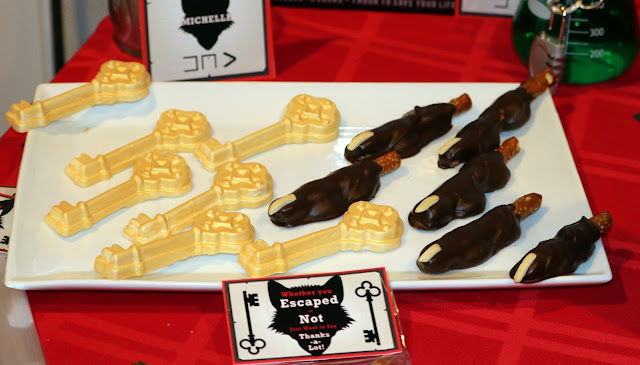 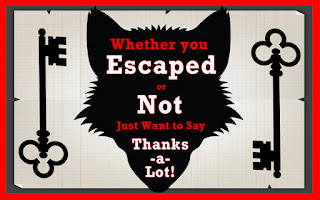 Favor: I decided to create two treats as my parting gifts.  A key to symbolize their escape and a werewolf finger to symbolize their lack of escape. I created this tag after coming up with the little rhyming phrase to make it fun.  To the make the keys, I bought a key mold from the local cake shop.  I melted white chocolate melts, and then when they were set, I sprayed the chocolate Wilton's gold candy spray. To make the werewolf fingers, I broke rod pretzels in half.  I melted soft caramel candies and dipped half of the pretzel in the caramel.  I shaped the caramel to be wide in sections to look like knuckles.  Once the caramel hardened, I dipped the caramel part in melted chocolate and placed a slivered almond to look like a fingernail. 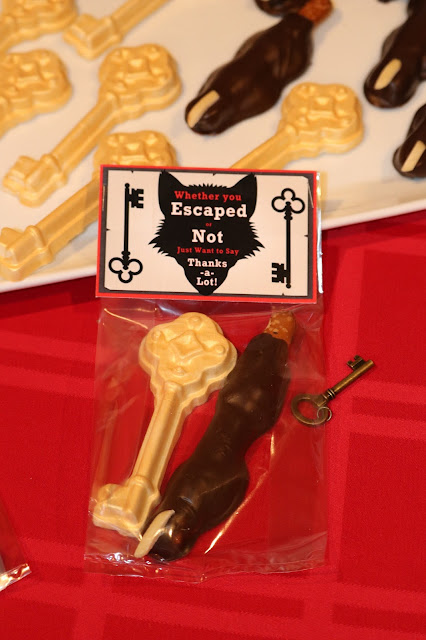 Escape Room in a Box was a lot of fun, and I love the escape room theme.  If you are looking for a fun evening with friends, and you want to include challenge in your fun, then definitely try this theme.  Leave me a comment and let me know what some of your favorite details are from this party.  I love to hear from my readers!

Posted by InviteandDelight at 5:30 PM

As simple as it was, I love the Petri dish jello. The whole theme is amazing and I can't wait to try the game!

What do I love about this post? EVERYTHING! What a great idea for an amazing party! Thank you for sharing your gift with us!