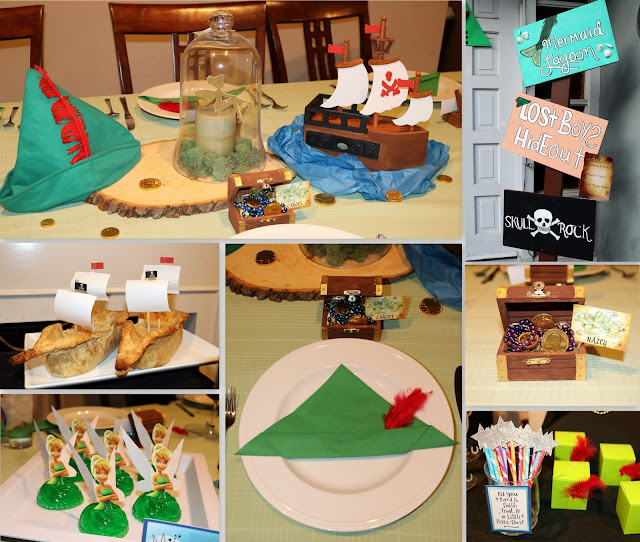 I am the Activities Director at a high school, and last week was our Homecoming Week.  Our dance theme this year was Peter Pan, so Peter Pan has been at the forefront of my thoughts and I decided to make it our November monthly dinner theme as well.  I love that this theme can be elegant, mystical, or just plain fun. 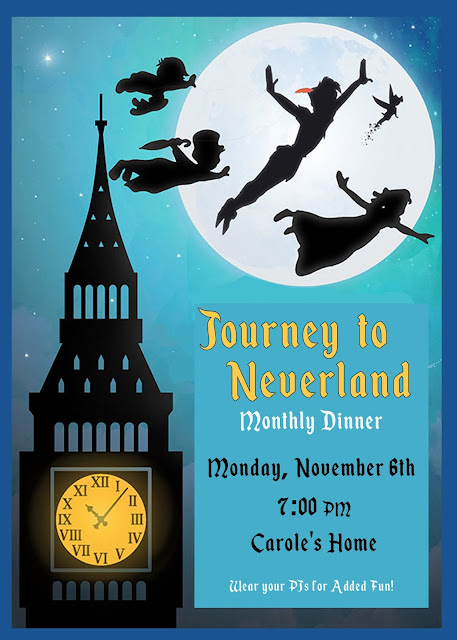 Invite:  I created the invitation on PhotoShop.  I love the nighttime shades of blue mixed with black, white, and yellow. I also love any excuse to wear pajamas! 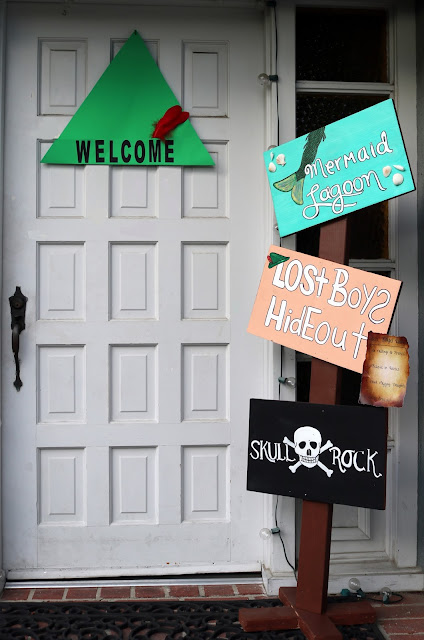 Entry Decor:  This wooden sign is the one piece I borrowed from my school's Homecoming decorations.  We made this sign for the dance, but it worked perfectly at my front door.  I also made the giant Peter Pan hat out of green posterboard, my Cricut cutter to make the letters, and some red feathers. Super easy to make. 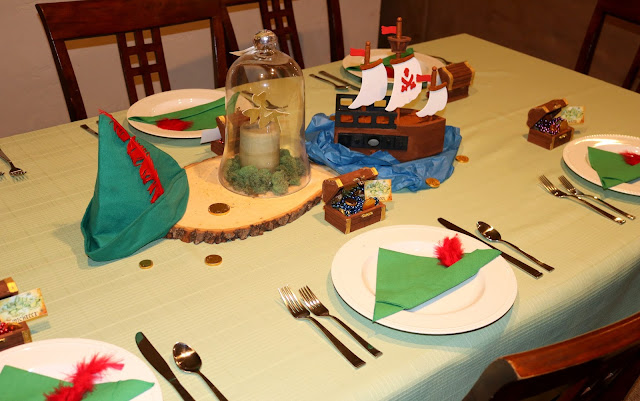 Inside Decor:  Peter Pan has some amazing characters, and I wanted to incorporate them all into my table. For Peter Pan, I borrowed a Peter Pan hat from one of my students who was Peter Pan for Halloween. 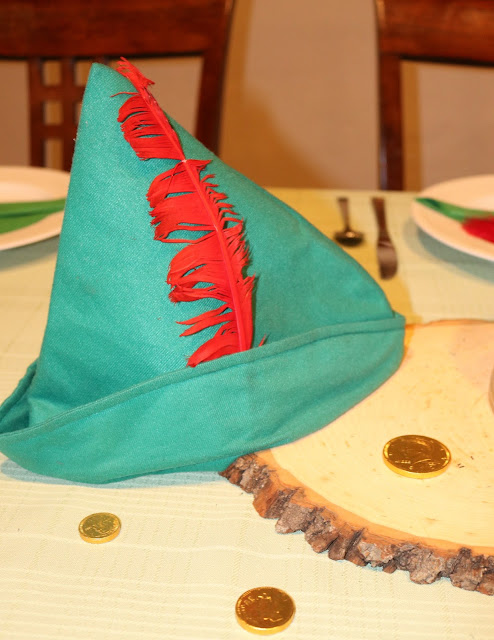 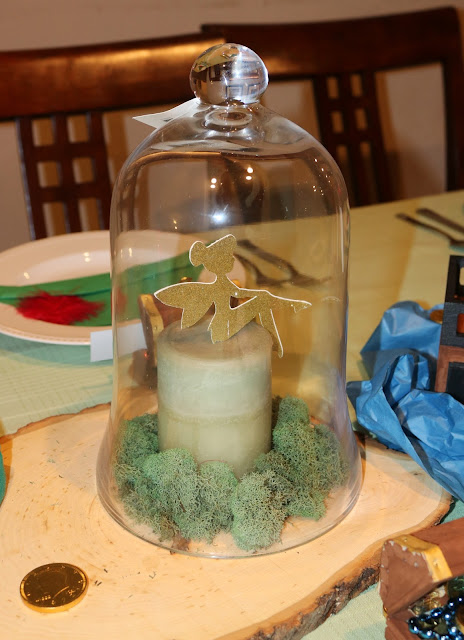 For Tinkerbell, I used my Cricut and a gold glitter cardstock to cut a silhouette of Tinkerbell sitting down.  I placed her on top of a candle and added green moss to the base.  The glass around her I bought at Michaels, and I set it all on a log I already had in my home. I had some battery powered tea light candles under the moss to have a little "twinkle" of light, but they were candles I had sitting around the house, and they lost power before the party, so I took them out. 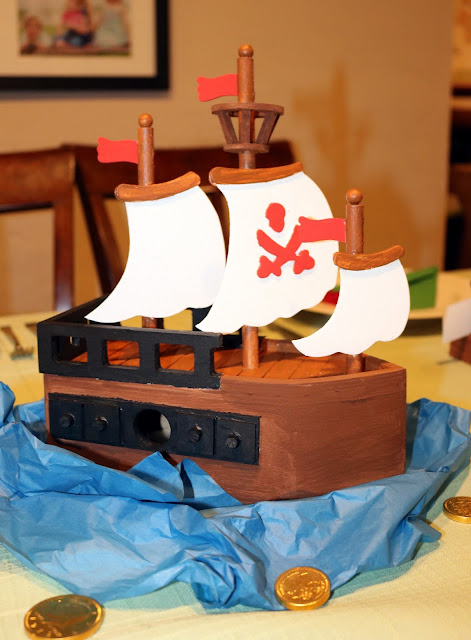 The pirate ship I purchased at Michaels and then painted.  I added some blue tissue paper under to look like the ocean and spread chocolate gold coins throughout the centerpiece. 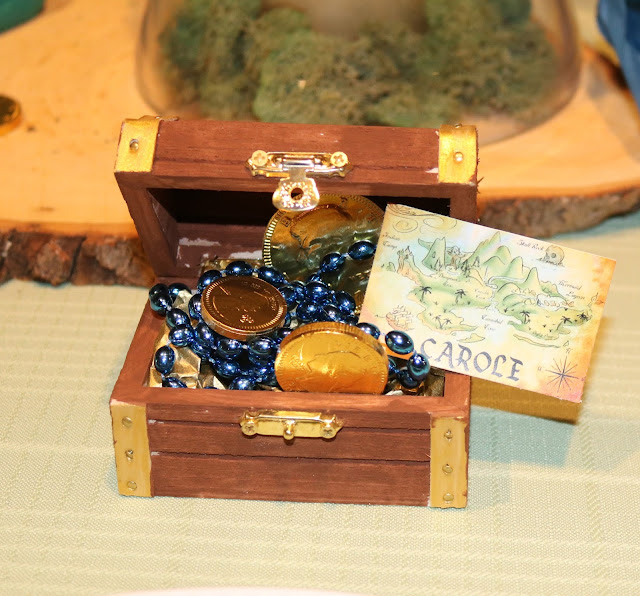 For the placecards, I painted chest boxes with glitter gold and brown paint.  I put some gold tissue paper in the bottom as a spacer, and then added a beaded necklace and some chocolate gold coins.  I made a map of Neverland on Photoshop and added each guest's name. 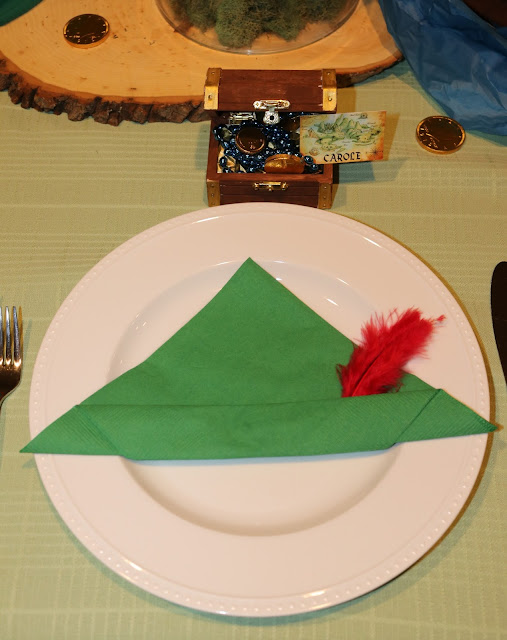 These Peter Pan hat napkins are super easy, and I love what they added to the table.  I bought large dinner napkins and just folded them before adding a red feather. 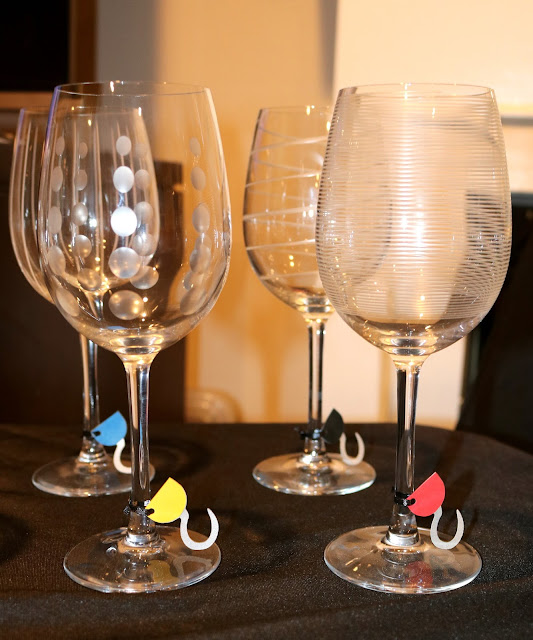 For wine charms, I made Captain Hook hooks out of cardstock in various colors.  These were easy to do on my Cricut cutter. 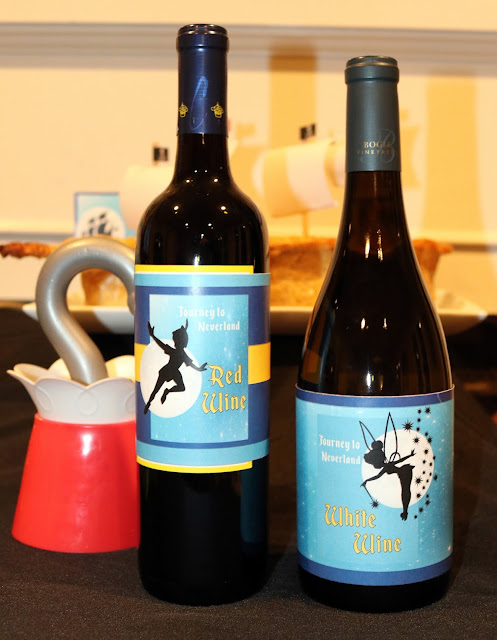 The wine labels I designed to match the invitation and menu cards.  They were just simple silhouettes of Peter and Tinkerbell. 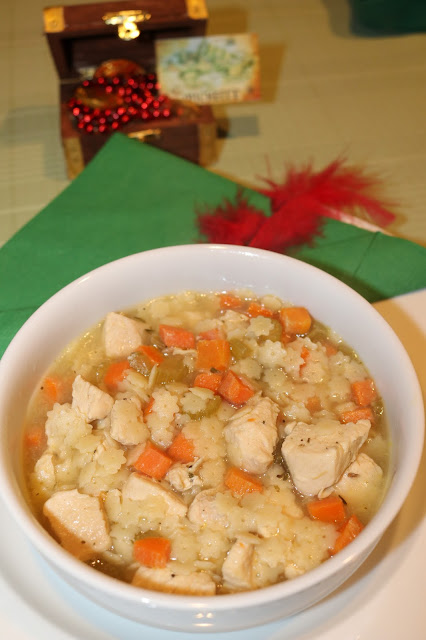 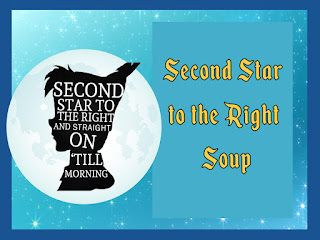 Menu: Although some items on my menu took some time to craft, many of these items were made the evening before, so that made the day-of stress a lot less.  For a starter, we had Second Star to the Right Soup (Thanks Deanna for taking over making this one of me!)  We used star shaped pasta in a chicken soup recipe.  You can buy the star shaped pasta at almost any grocery.  The soup was delicious, and we only served a small amount so guests wouldn't fill up too much on it. 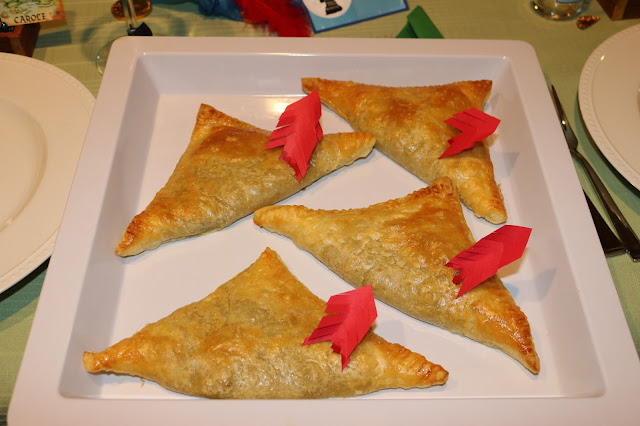 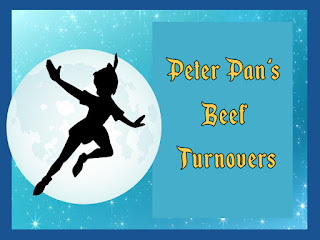 For the main course, I served beef turnovers.  I have made these a ton of times for my family using pie crust (see my Dr. Seuss post for the recipe were I made Yertle the Turtle turnovers).  For this party, I used puff pastry instead since I was having pie for dessert.  As always, these turnovers are really good.  When I make a batch, I usually freeze half of them, and save them for another night's meal.  For these Peter Pan hats, I shaped the turnovers into triangles.  I added a red feather out of cardstock just sticking the end of it into the pastry. 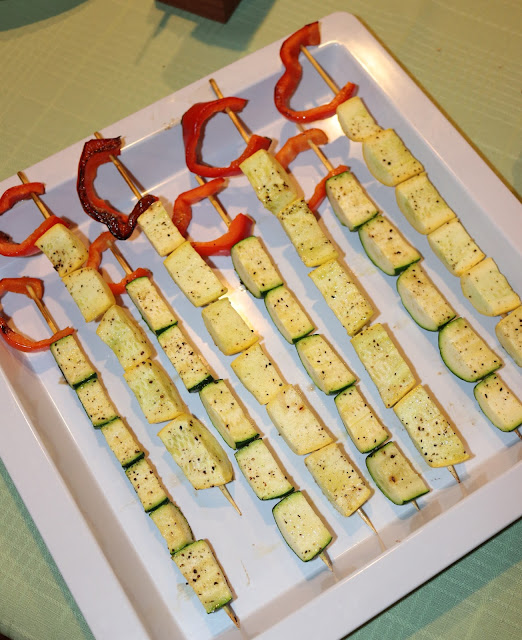 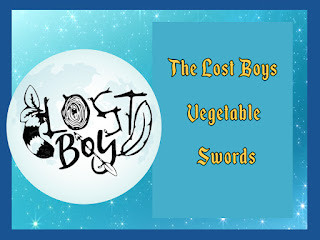 Along with the turnovers, I served skewered vegetables to make them look like The Lost Boys' swords.  The swords are zucchini and yellow squash cut in semicircles.  The hilt of the sword is a red pepper.  The red pepper is cut horizonal in order to have a larger curve.  We tried it the other way, and it didn't look as good.  Helpful hint: slightly cook the veggies in the microwave before skewering.  This makes it easier to thread the skewer without the raw vegetables breaking.  After all were threaded, I put the swords in the broiler to bake the rest of the way. 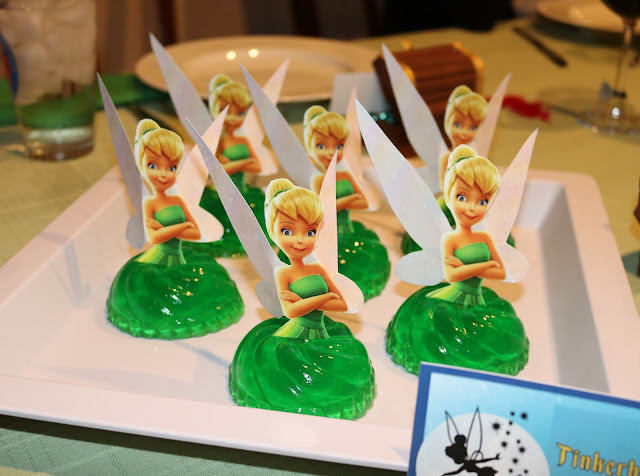 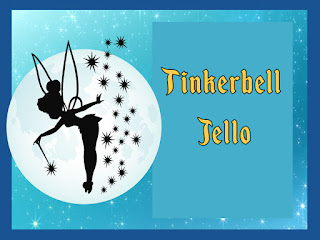 I also made Tinkerbell jello.  I borrowed some mini bundt cake molds from my mom and made a simple lime jello.  I found an image of Tinkerbell -- I just had to PhotoShop the second wing on her because of the placement of the wing on the image I found.  I printed her on cardstock, cut her out, and taped a toothpick to the back before sticking her image in the jello.  Super simple. 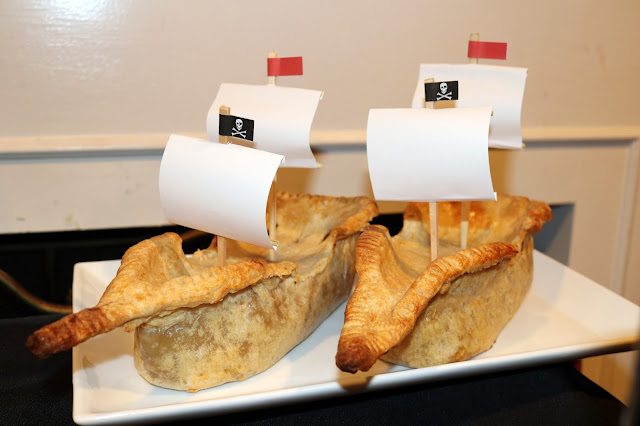 For dessert, I made these PIE-rate ships. I found the recipe here, but I only followed the recipe for the pie crust. I needed simple, so I bought apple pie filling from the grocery for the inside.  These PIE-rate ships definitely were not the simplest things to make, but I think all the steps were worth it, as they were really cute and matched my theme. 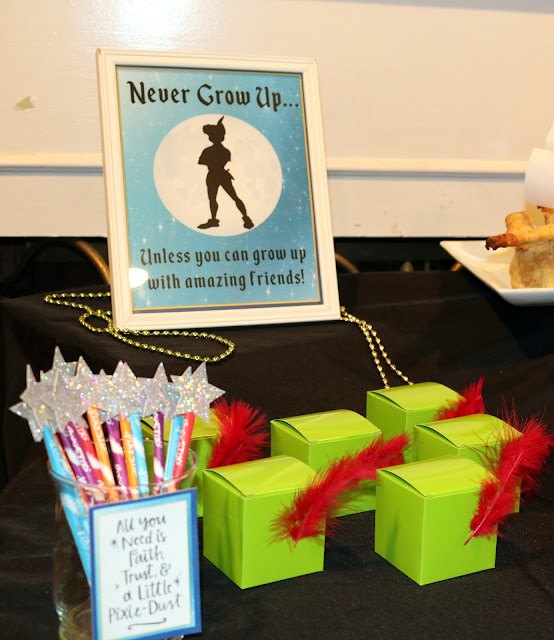 Favor:  These monthly dinner girls are my closest friends, so I made this sign to display near my favors.  I truly do have the most amazing friends.  As a parting gift to guests, I had lime green boxes that I filled with tissue paper and chocolate gold coins.  I glued a red feather to the front for a Peter Pan flair. 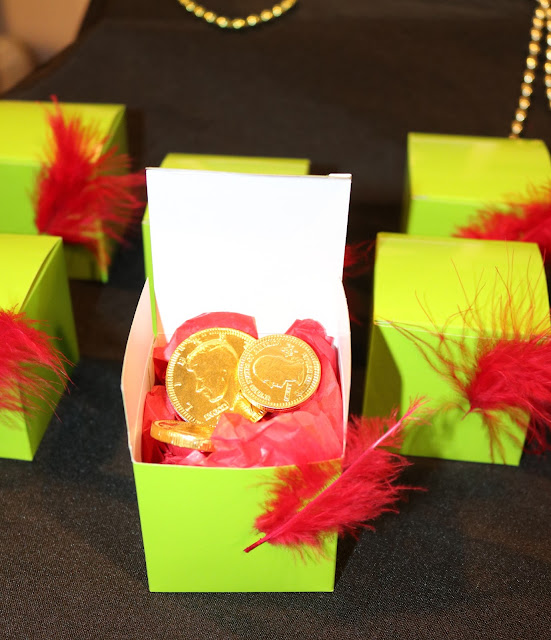 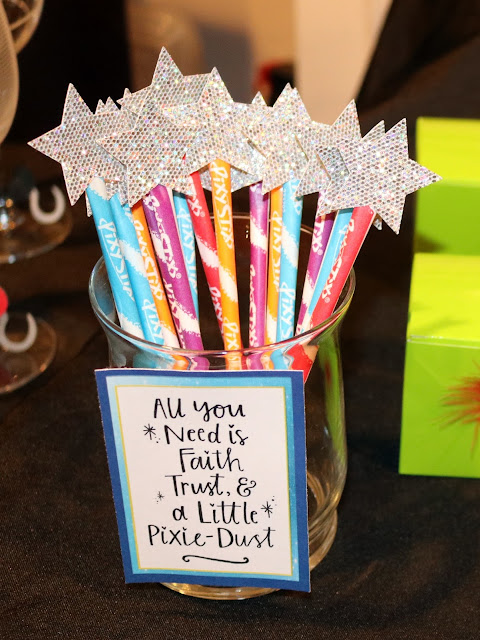 I also had Tinkerbell's Pixie Sticks.  I cut silver glitter stars with my Cricut and glued one to the top of each Pixie Stix.  The quote on the front of the vase is one of my favorites from Peter Pan.

Posted by InviteandDelight at 4:35 PM

So much fun as always! I love all the little touches you always create to make these dinners so special for us! My favorite was the turnovers...they are so delicious! Everyone needs this recipe in their catalog!