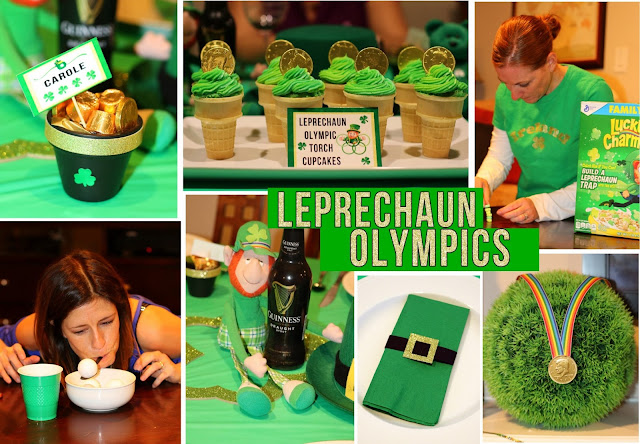 In 12 years of hosting monthly dinners, I have yet to have a St. Patrick's Day theme. I decided this was the year to do it, but I wanted to add a little fun to it as well.  Remembering how fun our Minute to Win It Dinner Party was back in 2012, I decided to add some fun St. Patty's Day games to this dinner.  Our monthly dinner became the Leprechaun Olympics! 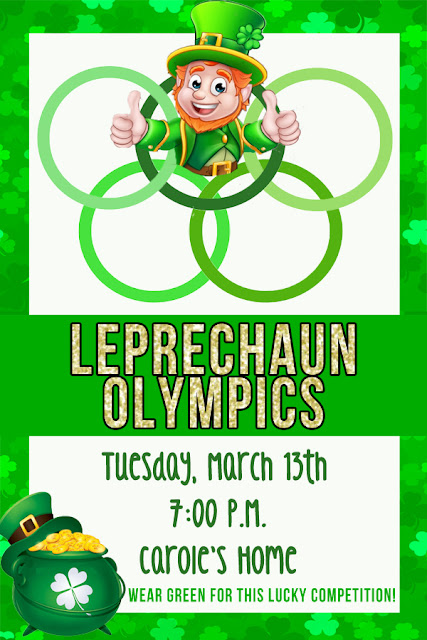 Invite: I designed the invite on PhotoShop making Olympic Rings in shades of green to pull in the Olympic part of the party.  I used the same leprechaun and Olympic rings on my front door entry sign to welcome guests to the party. 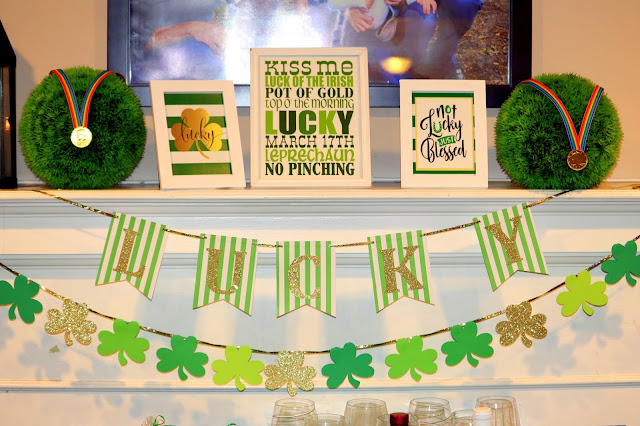 Inside Decor: One of my friends made me the cutest Valentine's mantle banner which inspired me to make a St. Patrick's Day one.  I made this using my Cricut Explore and then printed out some signs I found online to frame above the mantel.  The green grass balls are from Oriental Trading. I originally got them for my daughter's Trolls party, but they work perfectly for St. Patty's and Easter too. 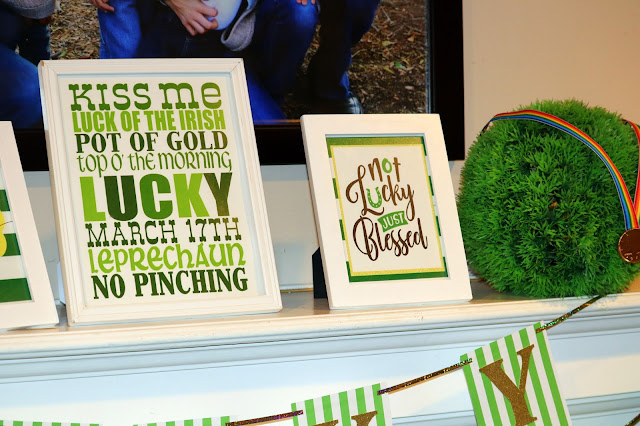 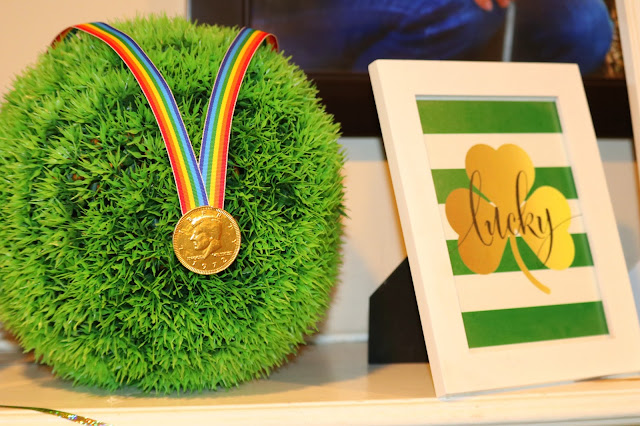 I added a gold medal I made to each grass ball by hot gluing the ends of the rainbow ribbon together and adding a big gold chocolate coin. These worked as added mantel decorations, and they were also awarded to the winners of the Leprechaun Olympics at the end of the evening. 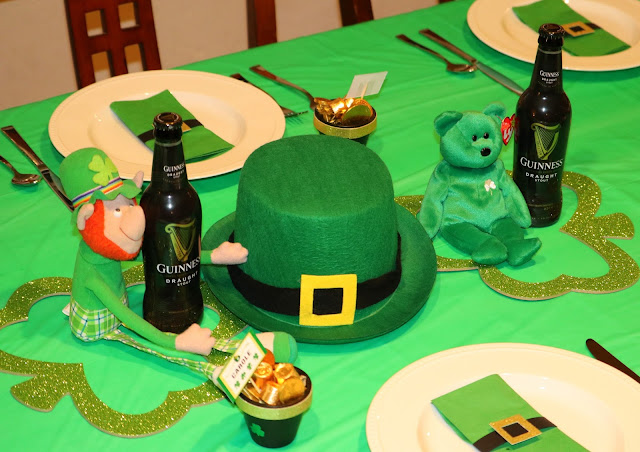 For the table, I used a green tablecloth and made a centerpiece out of St. Patty's day themed pieces.  The leprechaun and bear I borrowed from a friend.  The felt hat I purchased in the dollar bin at Target.  The glitter shamrocks I found at the Dollar Tree. 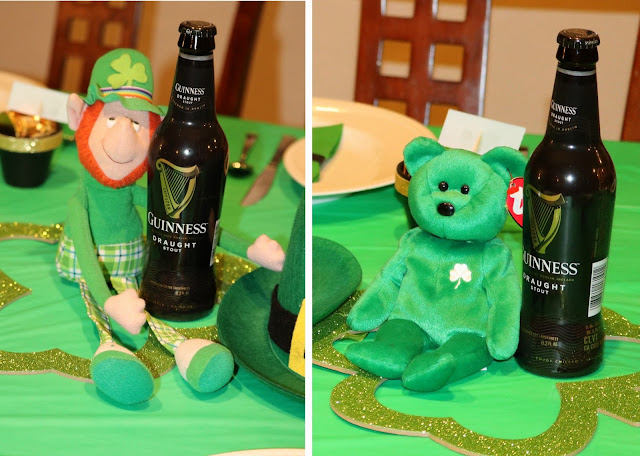 Had a bit of trouble getting the leprechaun and bear to sit up, so I added a couple Guinness bottles -- an easy and theme-appropriate fix. 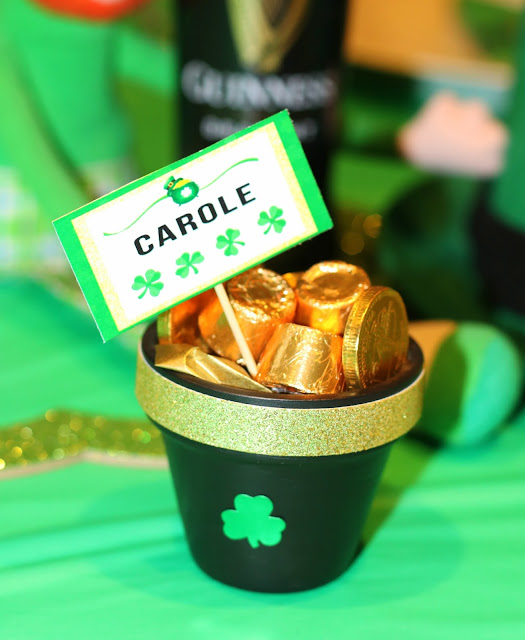 For place cards, I made mini pots of gold.  I painted flower pots I purchased at Michaels black, added a glitter strip with card stock, and a shamrock sticker.  I filled the vase with gold tissue paper, chocolate gold coins, and Rolos. 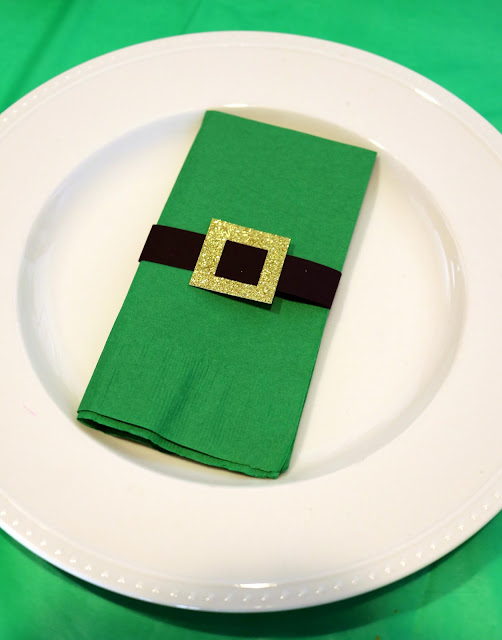 Added a strip of black card stock and a gold glitter square to make a leprechaun belt for my napkins. 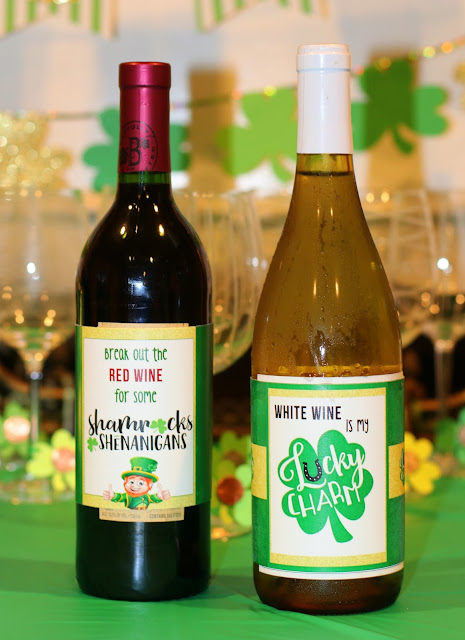 I made a couple themed wine bottle labels to match my theme using PhotoShop.  There's nothing like some red wine when you are getting ready for Shamrocks and Shenanigans, right? 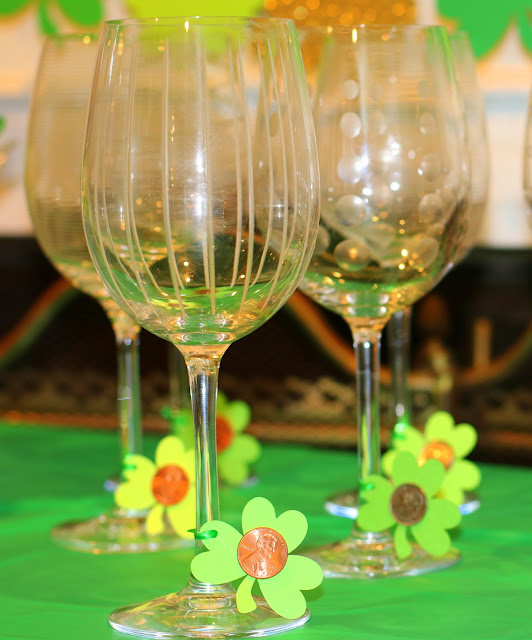 For my wine charms, I used my Cricut to cut out shamrocks in 5 different shades of green.  I glued a Lucky penny to the center of them.  These were cute, but I would suggest writing the guest's name above the penny to further distinguish them (especially if you have a large number of guests). 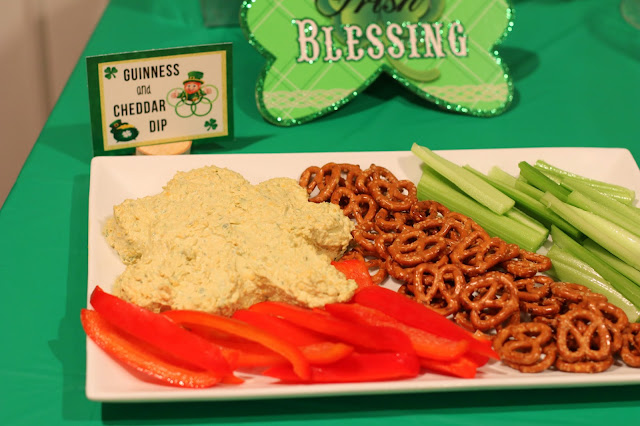 Menu:  I knew we were going to play our Leprechaun Olympic games before our main meal, so I wanted to have something for the guests to snack on as we played.  I settled on a Guinness & Cheddar Dip which was delicious!  I served the dip with red peppers and celery for dipping because they are light and I didn't want the ladies to fill up on bread or chips.  I did set out pretzels alongside the veggies. I shaped the dip into a shamrock for added fun. 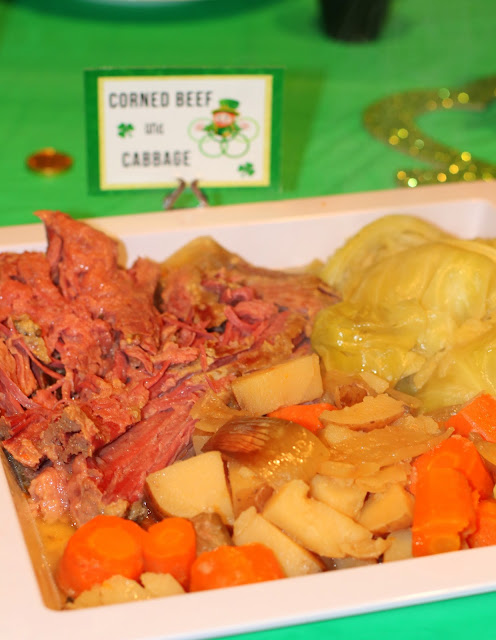 I love Corned Beef and Cabbage, and St. Patrick's Day is the only day I eat it all year, so this was my main entree.  There wasn't a need for side dishes since potatoes, carrots, onion, and cabbage are already a part of the entree.  I made the Corned Beef and Cabbage in the crock pot. I have never done this before, but it was tender, tasty, and super easy. 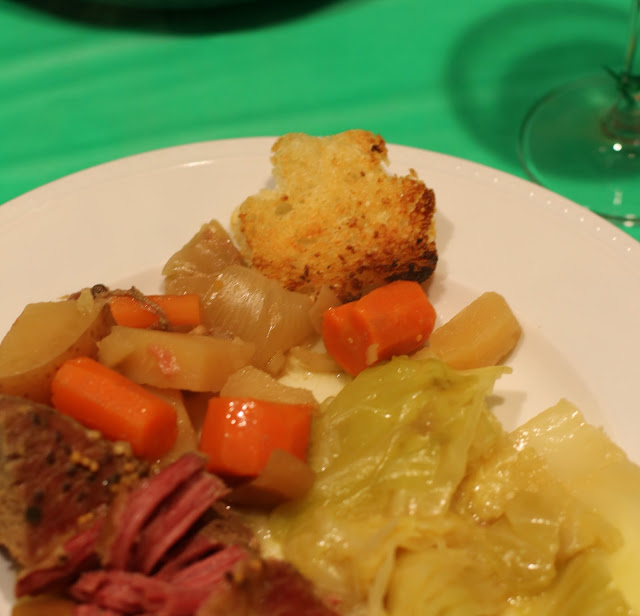 I made these small shamrock-shaped mini toasts to go alongside the corned beef and cabbage. 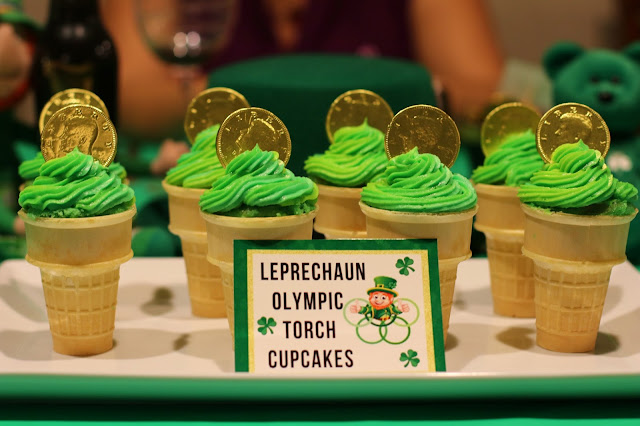 For dessert, I made Leprechaun Olympic Torch cupcakes.  I used a cake mix and added green food coloring.  I baked the mix directly in the ice cream cones - standing them up in loaf pans in the oven.  Two mistakes I made -- 1.  I filled the mix a bit high, so some overflowed. Make sure you fill a little below 2/3.  2.  I put the cones in a sealed container after cooling for storage.  When I took the cones out the next day to frost them, the cones were soggy and disgusting! I made a quick run to the store to buy more cones.  I pealed away the old soggy cone and stuck the cupcake down into the new one.  It worked fine, but could have been avoided if I didn't store them in something with a lid.  For the frosting, we piped on 3 shades of green and added a gold chocolate coin to the top to symbolize the Gold Medal of the Olympics. 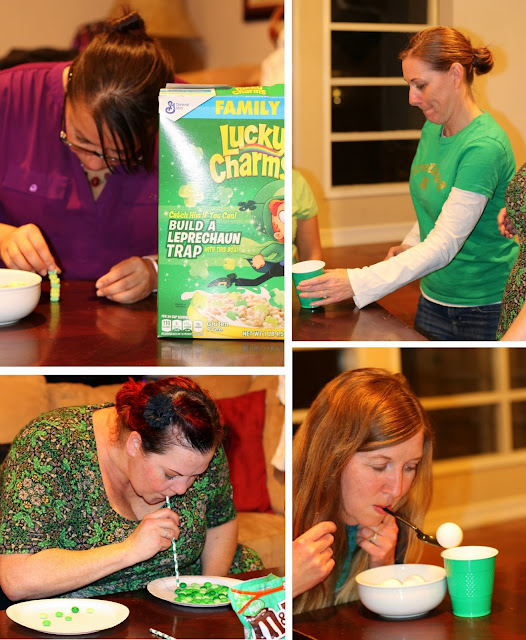 Activities:  I love short games even at adult parties, and Minute to Win It games work perfectly.  I found a few games that were easy to play, and that I could adapt to be St. Patrick's day themed.  The guests got into teams of two, and I awarded points for each game (1st place = 4 points, 2nd = 3, 3rd = 2, 4th = 1).  The winners received the gold coin medals I made. 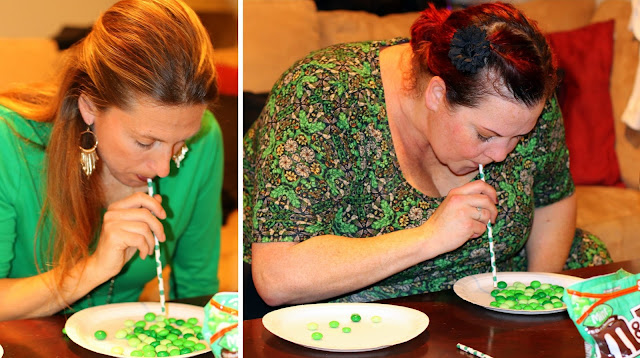 The first game was the Leprechaun Suck (a.k.a Suck It Up).  In this game, the object is to move as many M&M's from one plate to the other in one minute. I bought green mint M&M's to fit with the St. Patty's day theme.  Turns out these mint M&M's are a bit larger than normal ones, so it made it a little more challenging. I pulled some green out of a regular M&M bag as well because of this.

Next, we played Scoop "That Gold" Up (a.k.a Scoop It Up).  The object of this game is to transfer 6 ping pong balls from the bowl to the green cup using only a spoon held by your lips.  My plan was to spray paint the ping pong balls gold to match the name of my game and the theme, but I ran out of time.  I had guests transfer all 6 into the cup and then attempt to transfer as many as they could back into the bowl in the one minute time limit. 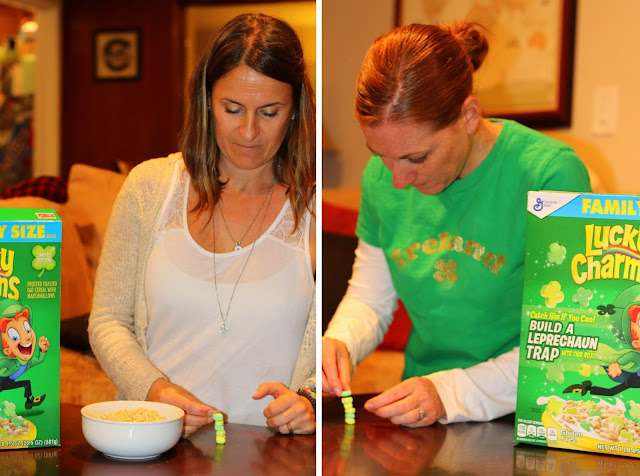 Our third game was the Lucky Charm Stack.  The girls had one minute to stack only the marshmallows from a bowl of St. Patrick's Day Lucky Charms cereal.  At the end of one minute, the team with the highest stack was the winner. 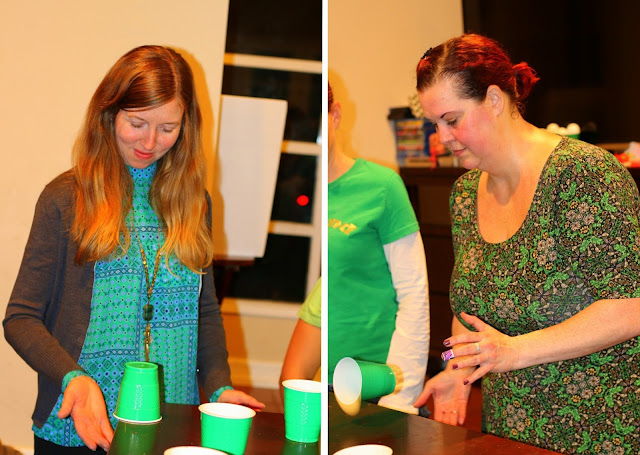 The last game we played wasn't a Minute to Win It game, but it is a common drinking game, so it fit with St. Patrick's day.  I called it Flip Your Luck (a.k.a Flip Cup).  The guests could choose whether they wanted a shot of Guinness or a shot of apple juice in their cup for this one.  We did it in a relay of 4 on 4.  If you haven't played this game, the first person drinks their drink and then has to try to flip their cup 180 degrees from standing upside down on the edge of the table to standing right side up on the table.  Then it is the next person's turn to drink and then flip, and so on. 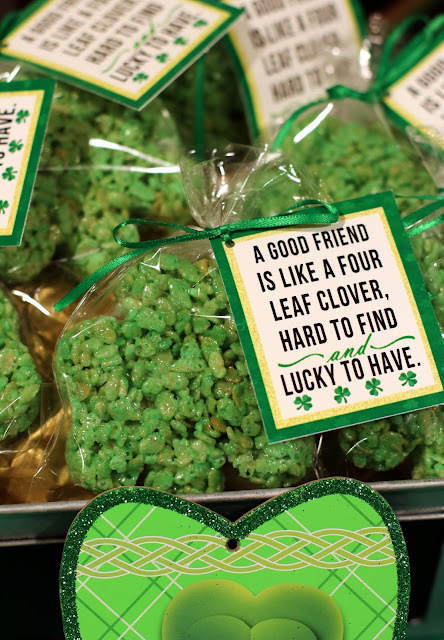 Favor:  I needed simple for a favor, so I made Rice Krispie treats, dyed them green, and cut them in the shape of a shamrock.  I added a little tag about friendship.

Posted by InviteandDelight at 7:12 PM

This was such a blast! The games are so fun and hilarious! You don't need to be a kid to play fun party games! And omg, the dinner was to die for! YUMMMMM!