It is hard to believe, but I have been hosting these themed dinners once of month for 12 years!  That's 144 dinner parties with friends!  To commemorate hosting these for a dozen years, I themed this month's dinner around a dozen donuts.  It was so fun to put together and I think it makes a super fun birthday or other party theme as well. 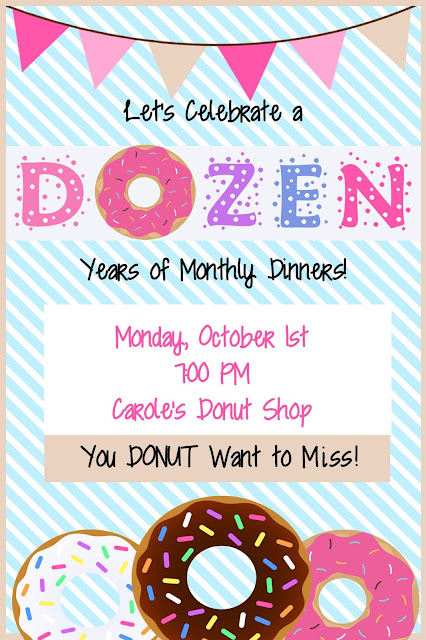 Invite:  I designed my invite with pastel colors because when I think of donuts, I always think of the pink donut boxes and the pink donuts with sprinkles (thanks Homer Simpson).  I found some fun sprinkle-like fonts to use to add to the fun. 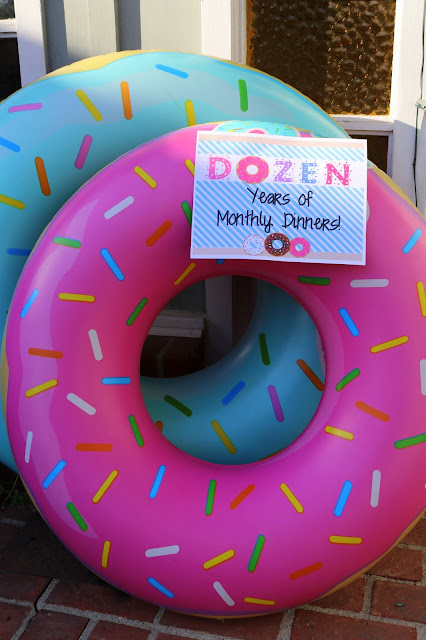 Entry:  A friend of mine happened to have these giant donut inflatable pool floats that she let me borrow for the party.  I placed two of the biggest ones at the front door with a small sign to welcome guests. 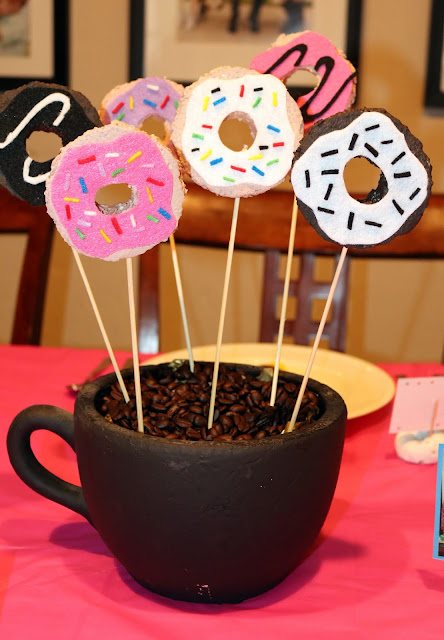 Table Decor:  I set the table with a bright pink tablecloth and white plates.  For a centerpiece I made donuts out of Styrofoam to place on skewers.  I bought a medium piece of rectangle Styrofoam, and then used an empty can with a circumference the size I wanted it as a "cookie" cutter.  You could buy already circular Styrofoam, but it was too expensive for me, so I just did it this way.  I put Mod Podge on the Styrofoam after cutting, then painted them.  After a day, I added the felt frosting and sprinkles.  I already had the coffee pot from my Friends monthly Dinner, so I just repainted it black and filled it with tissue paper and then coffee beans on top. 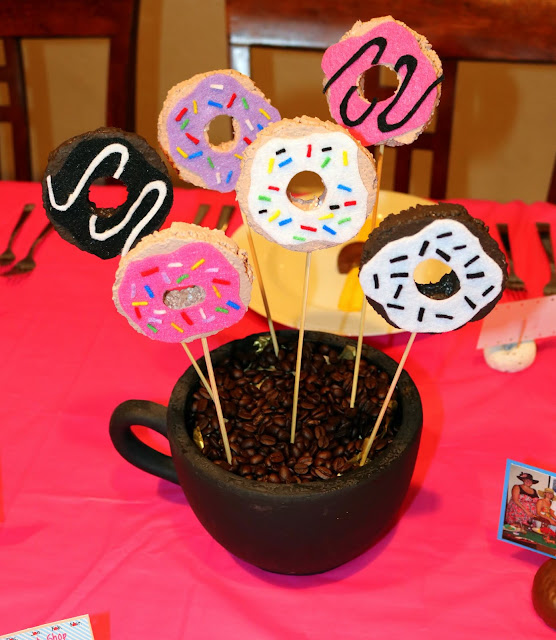 Also along the table, I placed a few photos of our dinners over the years.  I chose one dinner from each of the 12 years.

The front of each had one photo with the year and the back a different photo. I placed the photos on toothpicks and then stuck them in donuts along the center of the table. 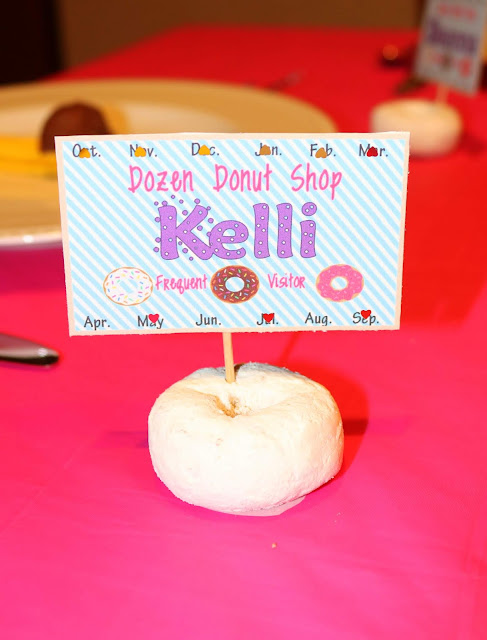 For a place card, I made pretend "frequent visitor" cards with each guest's name.  I used my whole punch to punch out the months which that particular guest had been able to attend our monthly dinners this past year. 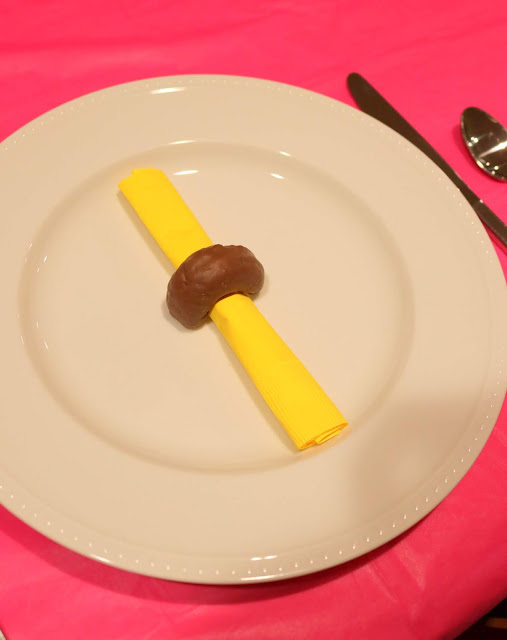 For a napkin holder, I cut a mini chocolate donut in half and placed it over a rolled napkin.  I had to carve out a bit of the inside circle to make it work, but I think it did. 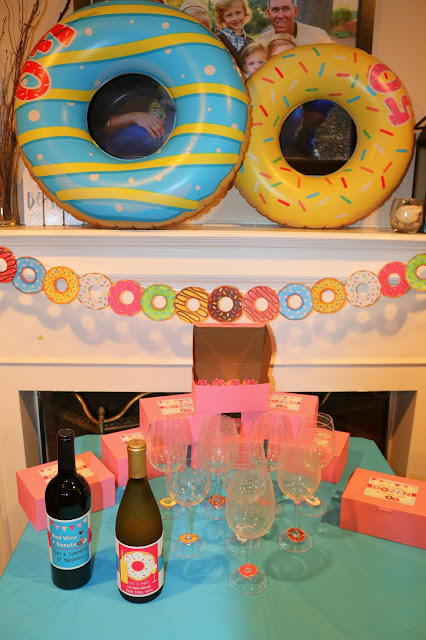 The beverage and favor table had fun donut displays too.  Over the mantle I placed two more of the inflatable donuts. 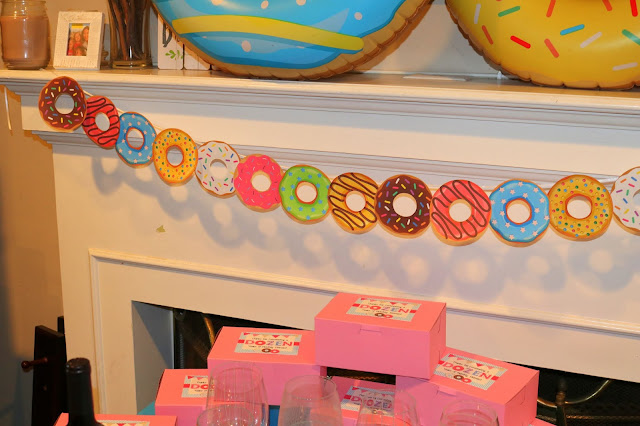 I made a simple donut banner with various donut images I found online.  I sized the donuts to be the same as my circle cutter so cutting them was easy.  I taped them to a piece of ribbon so that they could be close together and overlapping a bit. 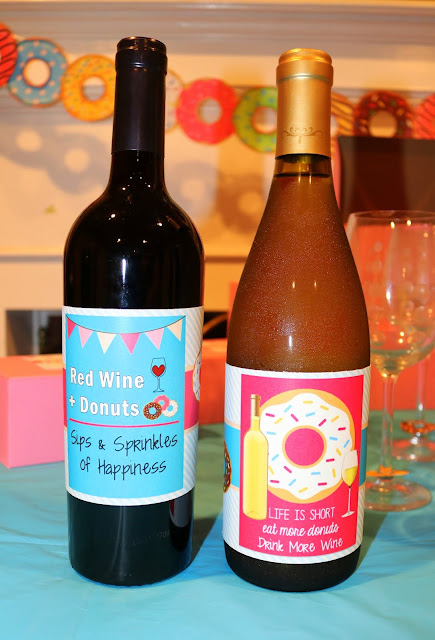 I made these fun wine labels on PhotoShop.  I made them to match all my party printables and decor.  I especially love the Sips and Sprinkles of Happiness...just sounds fun. 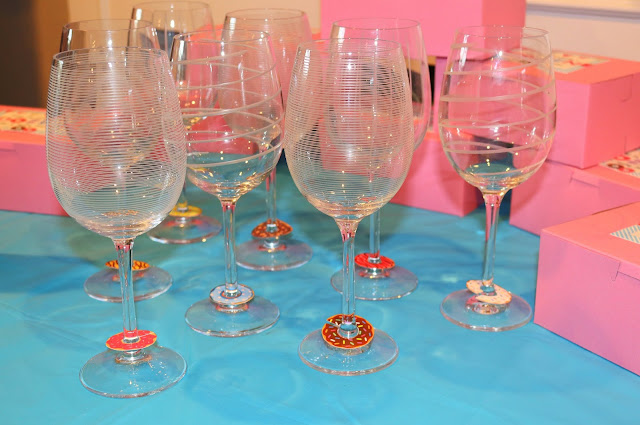 I did not get a great photo of my wine charms, but they were super easy and cute.  I used the same donut images I used for the banner just resized them to fit around wine stems. 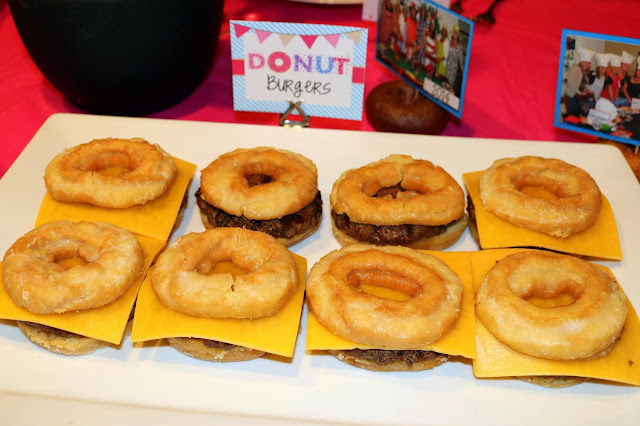 Menu: Although I love donuts, I don't think serving all donuts at a DINNER party would quite work.  I decided to serve mostly donut-shaped foods, but just one donut in the mix.  That donut was the bun for the main dish...hamburgers.  I served these with the fixings on the side as not all my girls love the same items on their burgers. 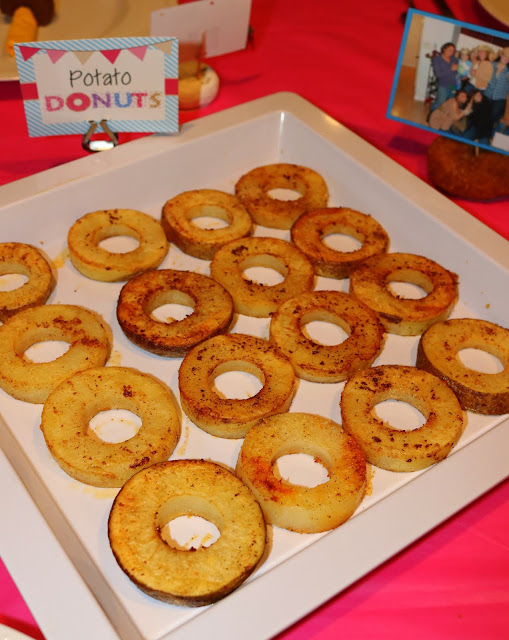 Along side the burgers, I served donut-shaped potatoes.  I cut them out with cookie cutters, then sprinkled them with Parmesan cheese, paprika, seasoned salt, and pepper before baking them in the oven. 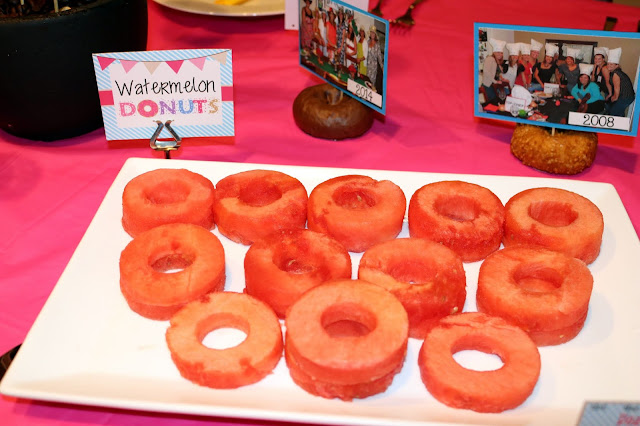 I also cut watermelon into donuts as another side. 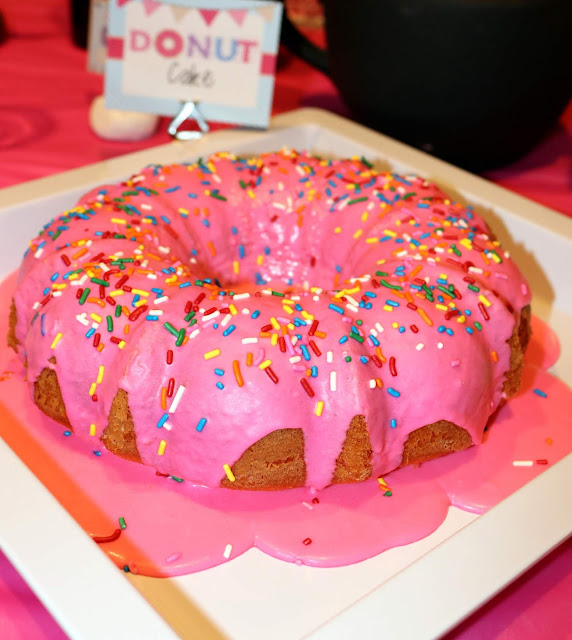 For dessert, I made a cake in a bundt cake pan and then topped it with a strawberry glaze and sprinkles.  The glaze was a bit runnier than I would have liked, but it tasted delicious. 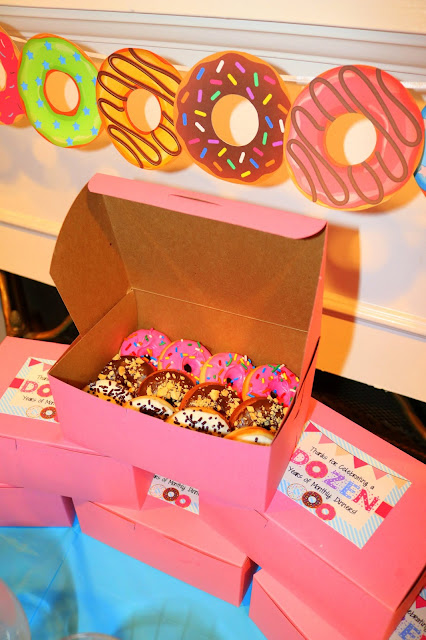 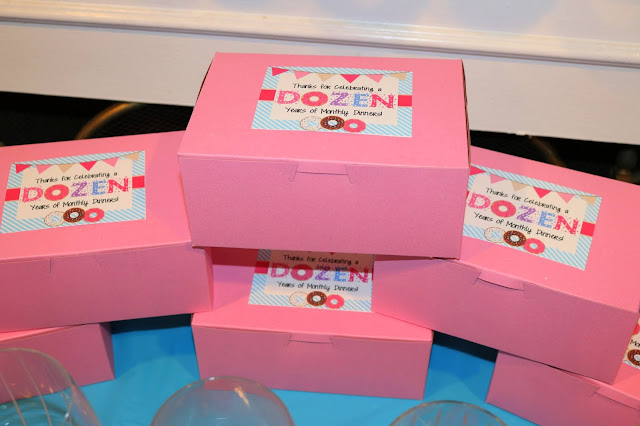 I bought the pink donut boxes from a local donut shop and made a label for the top. 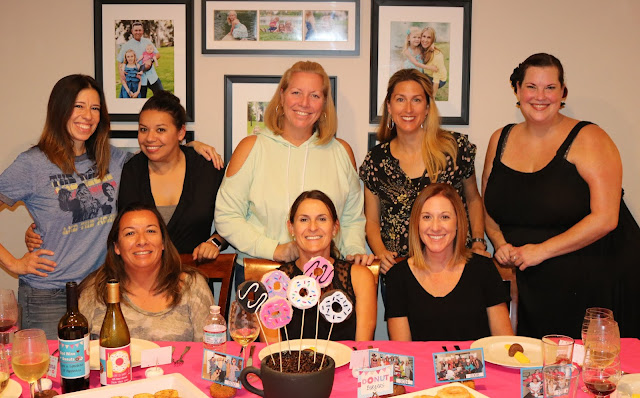 It's been a great 12 years, and I love these ladies. Can't wait for another "dozen" years of fun!

Posted by InviteandDelight at 4:12 PM