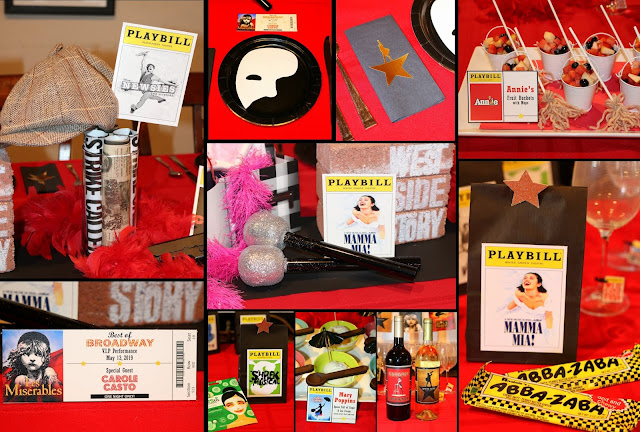 I love Broadway musicals, so I knew I could have some fun with this theme for our latest Monthly Dinner.  I stayed mostly with well-known/popular musicals, but added in a few others for smaller details. After throwing this themed dinner, I can't wait to get tickets to another musical soon! Invite:  I designed the invite with Playbill covers of musicals on each side.  I incorporated some songs/phrases from popular musicals in the text.  Broadway musical fans would recognize most - empty chairs at empty tables (Les Miserables), Seize the Day (Newsies), Wicked, Rise Up (Hamilton), and Razzle Dazzle You (Chicago). 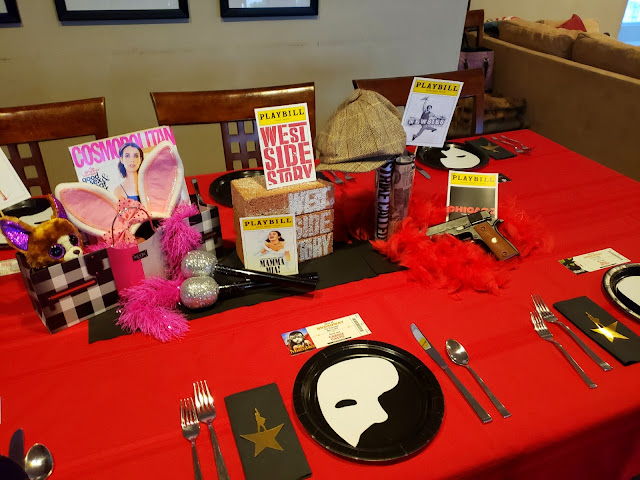 Decor:  I had so much fun setting the table for this dinner.  I highlighted 5 musicals in the centerpiece - Legally Blond, Mamma Mia, West Side Story, Newsies, and Chicago.  If you had multiple tables, you could easily break these up. 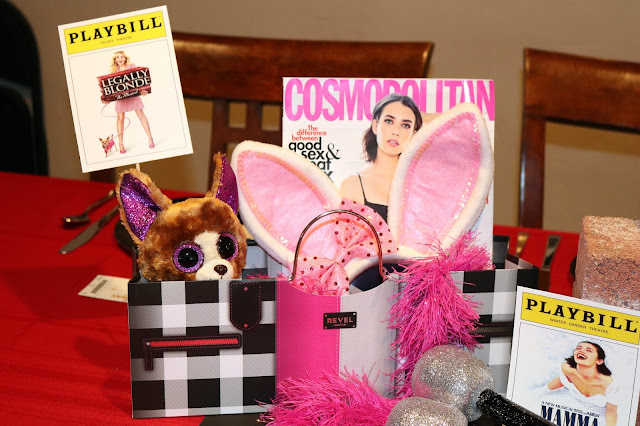 For Legally Blond, I found a wine gift bag shaped like a purse.  I bought a chihuahua plush from Party City to represent Elle's dog Bruiser, a Cosmopolitan magazine because "any Cosmo girl would know", some bunny ears to symbolize Elle's outfit at the "costume" party, and a pink boa just for fun. 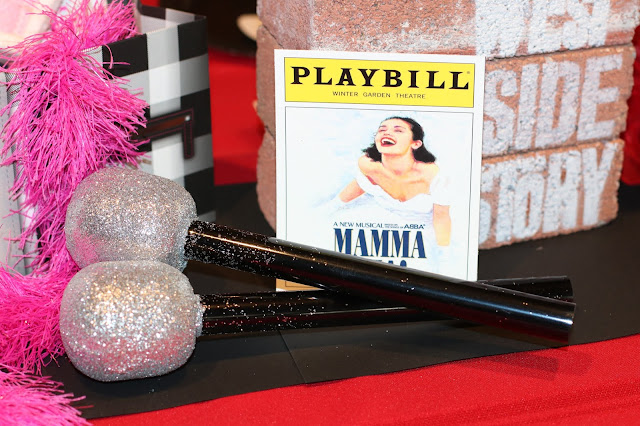 For Mamma Mia, I borrowed some silver-glittered microphones from the dance teacher at my school. 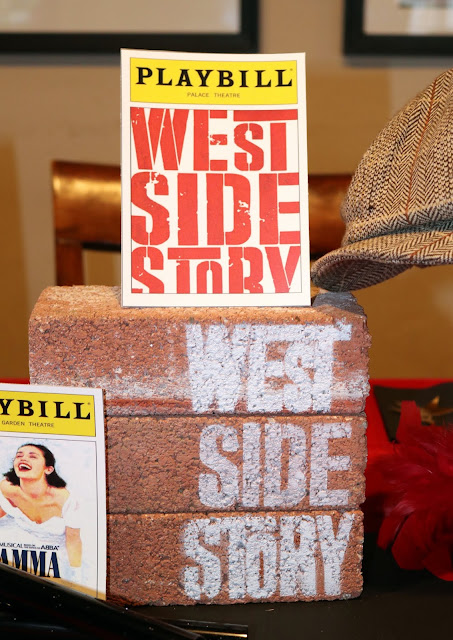 For West Side Story, I grabbed 3 red bricks from my backyard, made a stencil, and spray-painted the words of the title on them. For Newsies, I printed off some old newspaper headlines that went with the strike, rolled them up, and put them inside a vase.  I added a newsboy cap to complete the look. 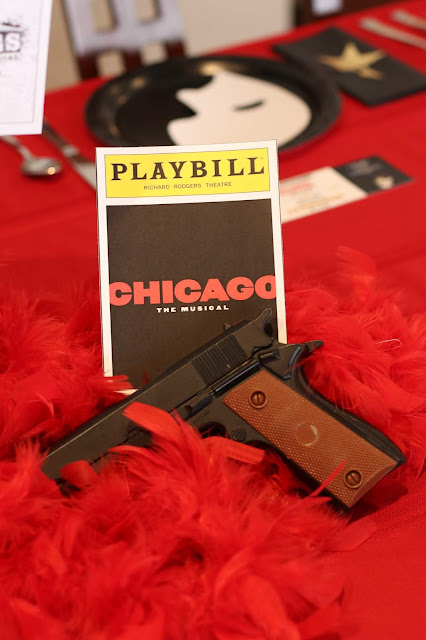 Finished off with the centerpiece with a red boa and a plastic gun to go with Chicago. 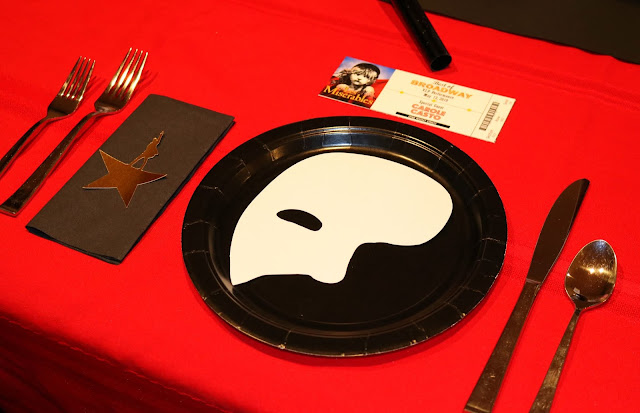 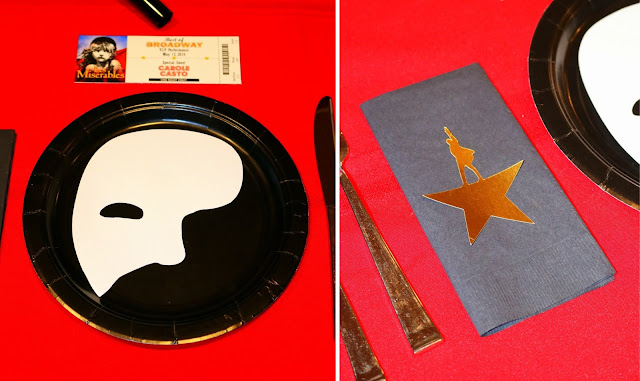 For each place setting I used black paper plates and cut out a white Phantom of the Opera mask to set on it.  I cut out the Hamilton logo on gold cardstock to set on up of a black napkin. 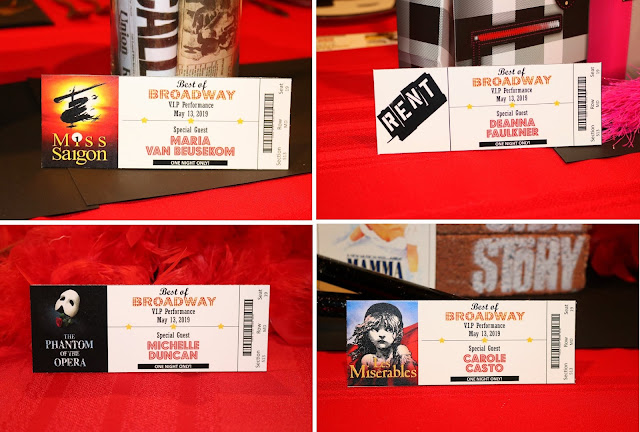 For placecards, I created theater tickets with popular musicals on Photoshop for a VIP Performance for each "special guest". 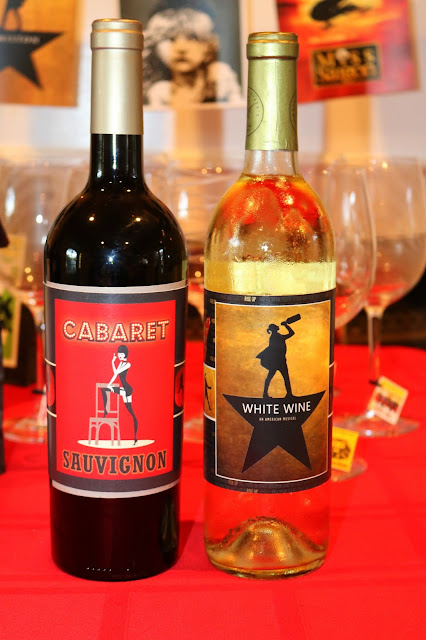 I made some fun wine labels to go with the Broadway theme. The musical Cabaret (instead of Cabernet) for the red wine, and a fun play on the Hamilton logo for the white wine. 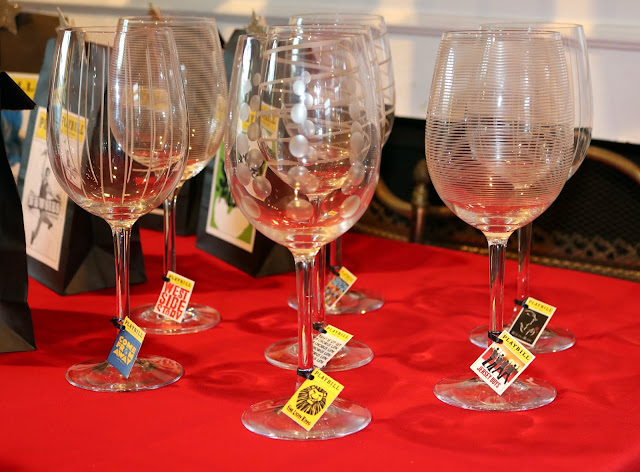 The wine charms were Playbill program covers for musicals that I had not used for other aspects of the decor. 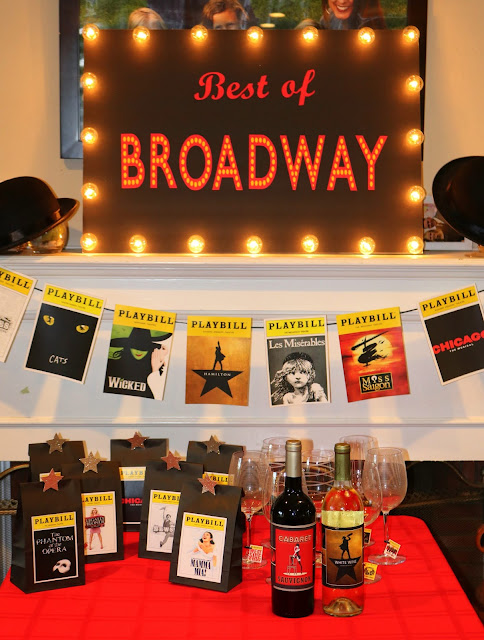 Here a look at the side table with the wine and favors.  I made a sign out of posterboard and cardstock.  I punched some holes to fit some lights through to add the flashy side of Broadway.  I created a simple banner of Playbill covers as well. 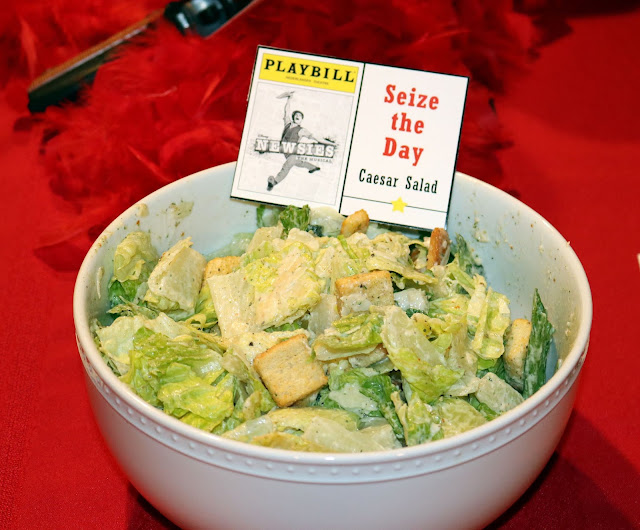 Menu:  It was fun to come up with the menu for this theme.  I tried to stay with common phrases from musicals or actual names of musicals again so guests could see the reference even if they were not hardcore Broadway fans.  We started with a Caesar Salad, I named "Seize"er the Day - after the famous phrase from Newsies. 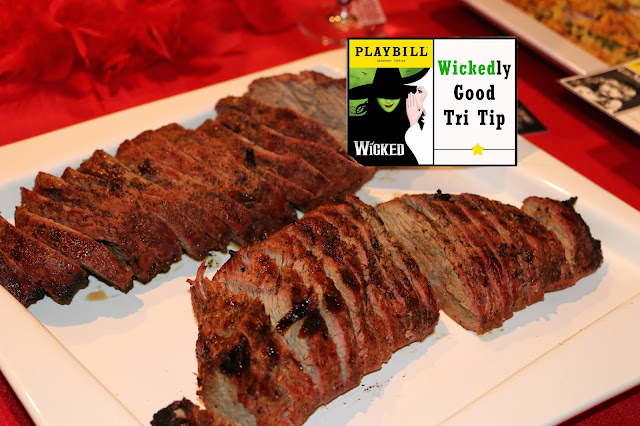 I recently bought my husband a Traeger smoker for his birthday (we love it).  I decided to cook Tri Tip on it for our main dish...and yes, it was Wickedly good! 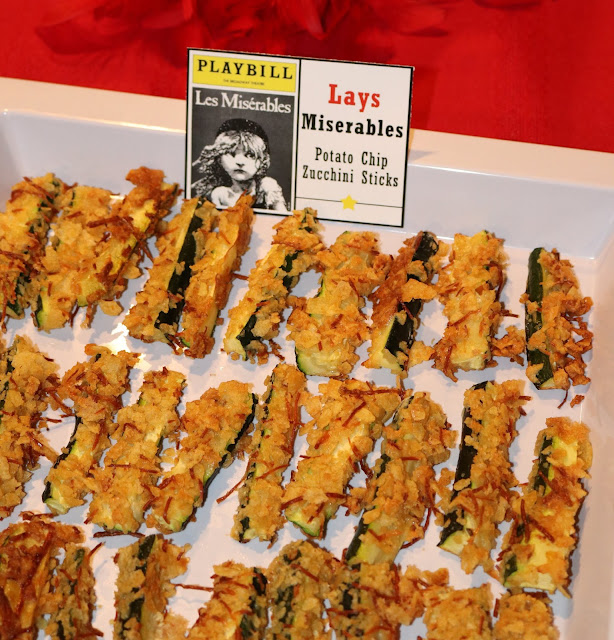 I made Potato Chip Zucchini Sticks as a vegetable using Lays Kettle Cooked Potato Chips.  I called this Lays Miserables.  I had marinara sauce on the side for those guests that wanted to dip them as this was a suggestion from the recipe.  These were pretty tasty.  I like the combo of the softer veggie with the crispy potato chip. 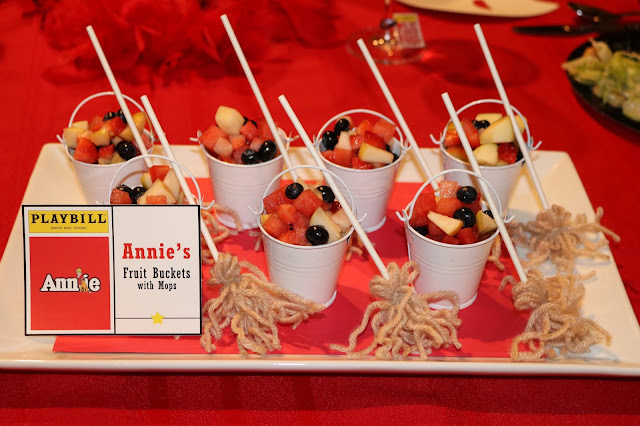 To go with the Broadway show Annie, I served a fruit salad in buckets with mops.  The buckets I found 3 for a dollar at the dollar store.  The mops I made out of chocolate sucker sticks and yarn. 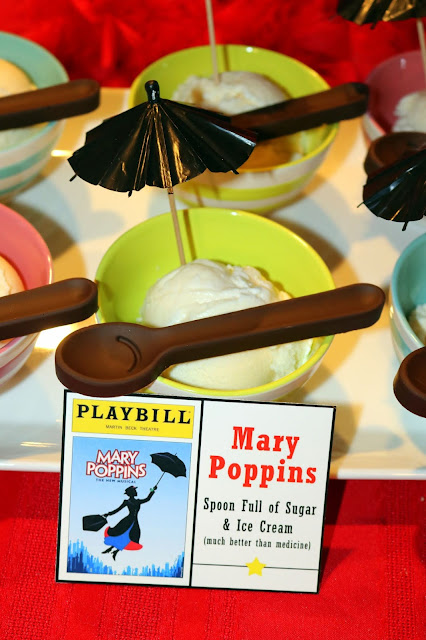 For dessert, I served vanilla ice cream with a chocolate spoon.  I added drink umbrellas that I painted black to represent the musical Mary Poppins with her iconic umbrella and a spoon full of sugar.  The spoon mold is from Pampered Chef and I have had it for a year.  I finally found a chance to use it! 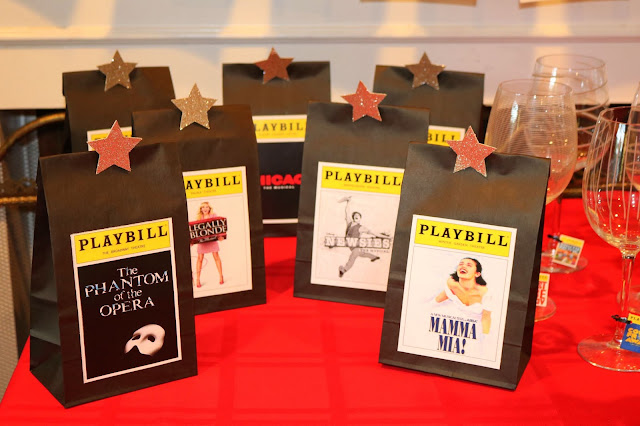 Favor:  I had a lot of fun customizing the favors for this party. Instead of giving everyone the same favor this time, I came up with something small that went with a Broadway musical and put it inside a black bag.  I printed the Playbill covers for the front and used a small clothespin with a glitter star glued to it to close up each bag.  Here's what I came up with to put inside. 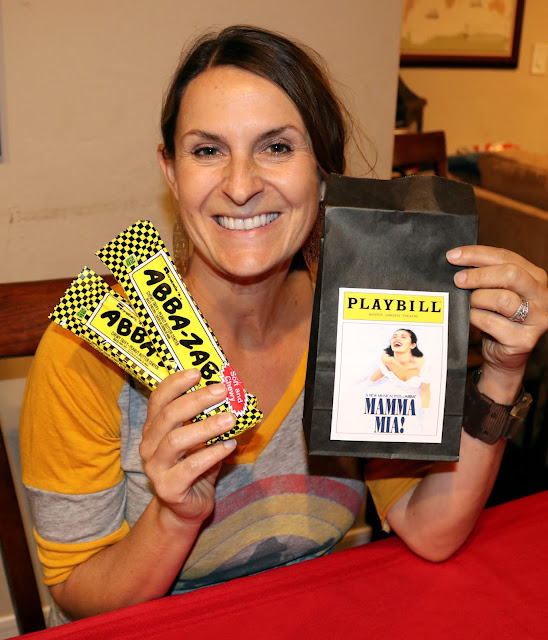 For Mamma Mia, the bag had two Abba-Zaba bars since all the music from this musical is from Abba.  Guests opened the bags one by one after dessert.  It was fun to capture the laughs and smiles. 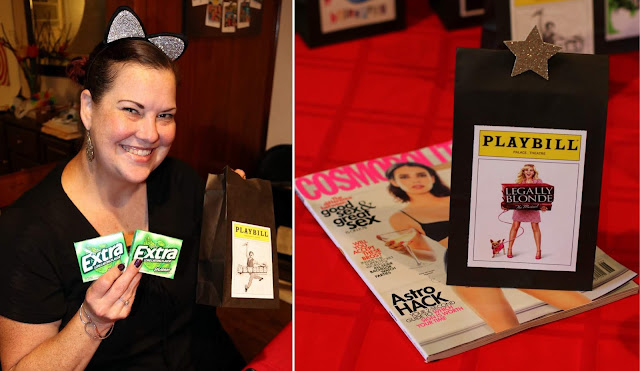 Inside the Newsies bag, I put two packs of Extra gum.  "Extra, Extra...read all about it!"  The Legally Blond was empty because it wouldn't fit, but the guest was given the Cosmo magazine from the centerpiece. 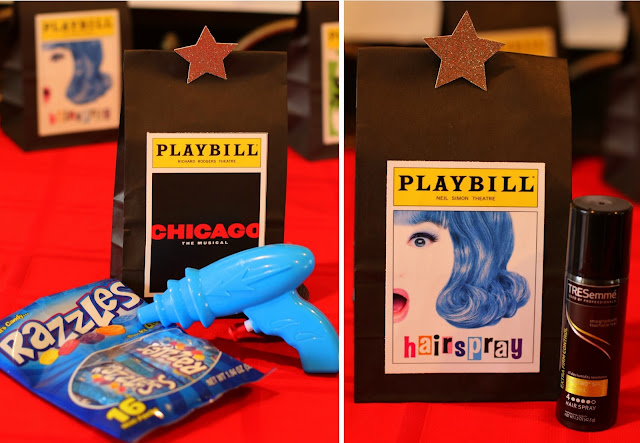 For Chicago, I put a silly squirt gun and some Razzles candy to "razzle dazzle them".  The musical Hairspray, was obviously a travel size hairspray. 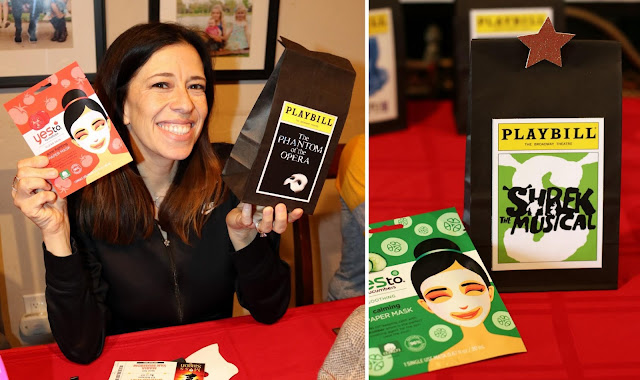 For both the Phantom of the Opera bag and the Shrek bag, I bought face masks.  A white face mask for Phantom and a green cucumber one for Shrek.  Super silly little gifts in these, but it was fun to open them.  I tried to get all usable and inexpensive items (except the magazine, but since I was using it for the centerpiece it served two purposes). We had a lot of fun with this theme, and I encouraged guests to come dressed to the theme.  This is me as a Newsie and my friend in a Wicked apron.  Some guests had cat ears for Cats, Aladdin leggings, and a Lion King shirt.  I had so much fun throwing this gathering, and it definitely made me want to go see another musical.

Posted by InviteandDelight at 5:53 PM