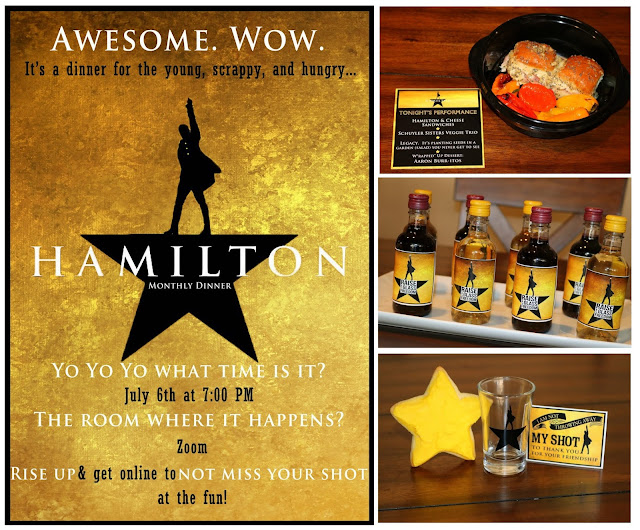 I have always wanted to see Hamilton in person, but never had the pocketbook to be able to afford tickets.  When Disney+ released the show this past week, I was super excited to finally watch it.  My socials were exploding with eager fans, so I knew it would be good.  I decided to host my monthly dinner with a Hamilton theme after watching the first part of the production and loving it.

With COVID-19 still threatening our communities unfortunately, "the room where it happens" had to be a zoom chat room instead of in person. It was still fun to put together and as usual, the girls and I had a great time catching up and chatting no matter where we were. 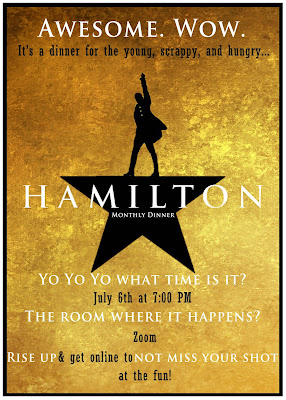 Invite:  I used various popular lines from the production in the wording of my invite, but kept the overall look of the invitation simple with just the Hamilton logo and poster as the background.  There are so many great lines in the production that it was fairly easy to include "Awesome. Wow." and others in the invite.  I used Tragan Pro as my font which is close to the Hamilton font on the logo. 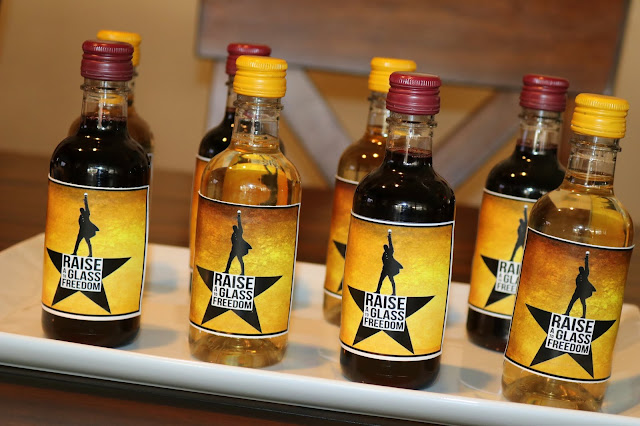 Dinner Details: You could definitely serve Samuel Adams beer for this theme, but the girls and I are more of wine drinkers.  I bought individual bottles of wine and created a label to attach to them.  I used the popular line from the production "Raise a Glass to Freedom" on top of the Hamilton logo.  Hard to see, but I used PhotoShop to add a wine glass into the raised hand on the logo. 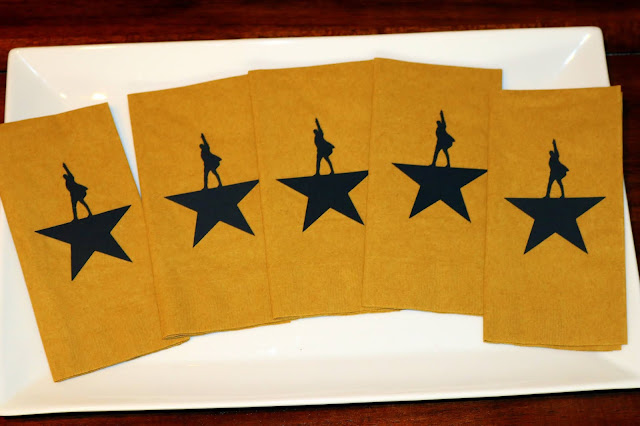 I bought gold napkins from the dollar store and used my Cricut to cut out the Hamilton logo on cardstock to glue to it. Simple. 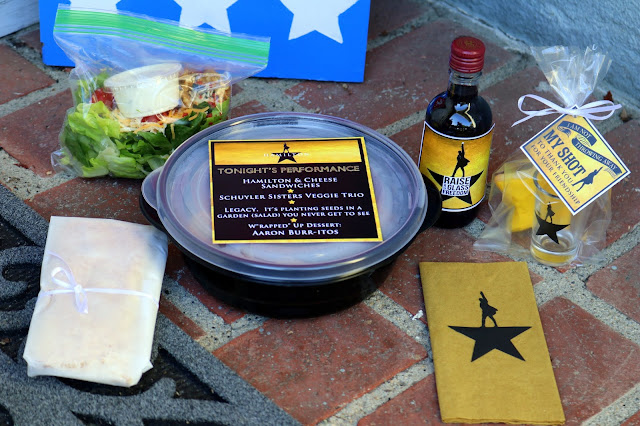 I always have fun coming up with a menu to match the themes of my dinners.  The only challenge during COVID with this is trying to find something that I can make that will still taste good by the time the ladies eat it since we are not all sitting at a dinner table together as we normally would.  For some monthly dinners during this time I have delivered the meals and goodies to porch steps of my guests, but for this one, the ladies came and picked it up from my porch.  This helped with timing in that all meals were picked up about the same time, and could be eaten during the zoom call before they could get cold. 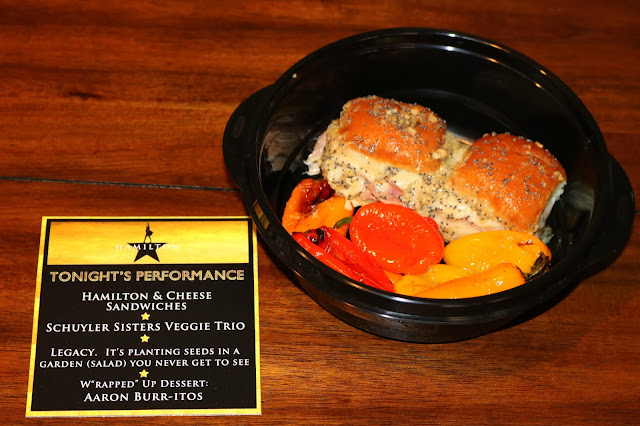 Menu:  With Hamilton as the theme, it was the obvious choice to serve ham.  I found this easy recipe for Ham & Swiss sandwiches on Hawaiian rolls.  They were delicious!  Even my kids liked them which is saying something!  I gave each guest two sandwiches.  Along with the ham & cheese sandwiches, I served oven-roasted baby peppers with balsamic.  I called these the Schuyler Sisters Trio as the peppers were in three colors.  These were tasty.  I would definitely make them again. 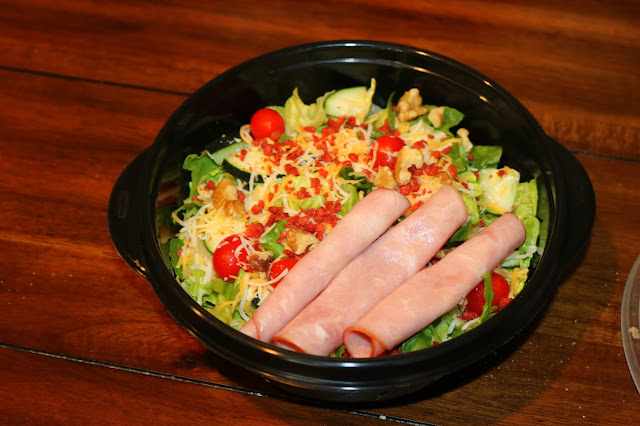 I served a side salad as well.  Just romaine, shredded cheese, tomatoes, bacon bits, walnuts, and sliced cucumber along with a side of ranch.  Those of us on Keto couldn't enjoy the sandwiches, so the salad was our meal with ham rolls on the side.  I also included the hot veggies in a separate foil packet for the Keto ladies. 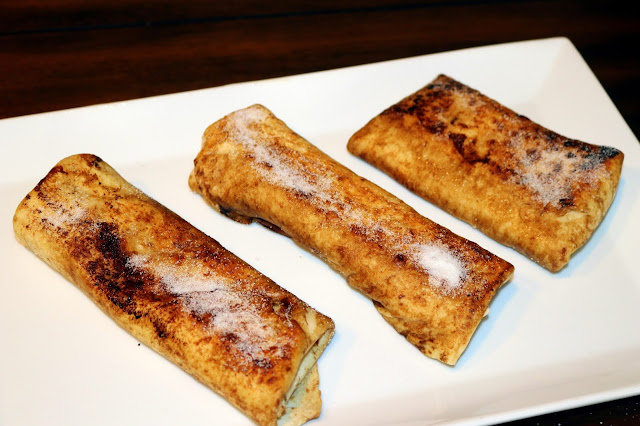 For dessert, I made Aaron BURR-itos.  These dessert burritos were easy to make with a cinnamon cream cheese filling and sliced strawberries rolled inside and then lightly fried.  I found the recipe here.  The girls said these were tasty, but the recipe only made 7 instead of 8 for me, so I didn't personally get to try them. 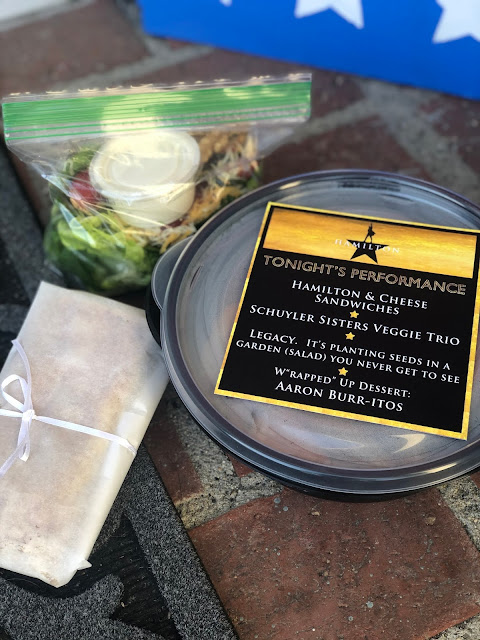 The dessert burrito recipe said they could be served hot or at room temperature.  I made them around 3:00, so they were room temperature for my dinner.  I w"rapped" each burritos in parchment paper and tied a ribbon to secure the parchment.  Since Hamilton has so much rap in it's musical numbers, this was perfect. 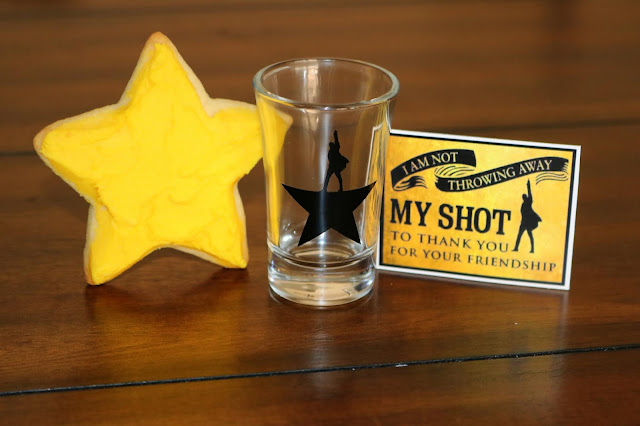 Favor: It was fun making the favor for this dinner.  I made star-shaped cookies with yellow/gold frosting, and placed them in a bag with Hamilton shot glasses.  The plain shot glasses I got 3 for $1 at the dollar store.  I used my Cricut to put the vinyl decal on the glass before wrapping it and the cookie. 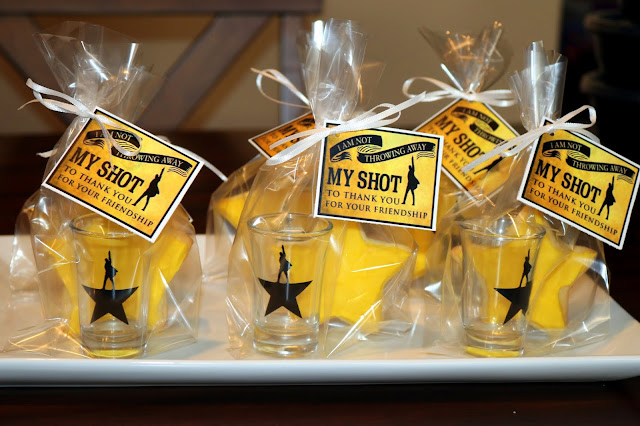 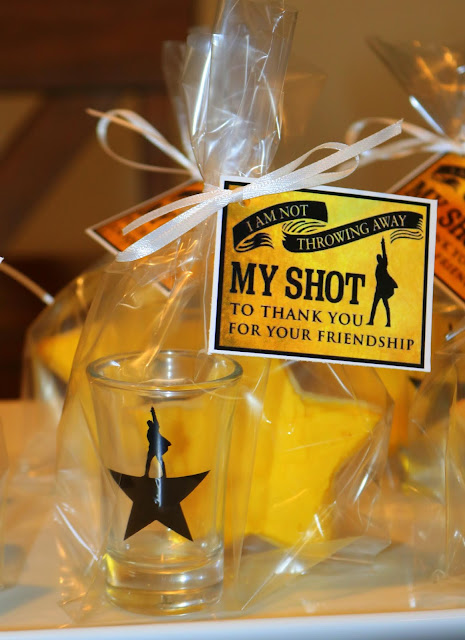 I created the tag that read "I'm not going to miss my shot...to thank you for your friendship."  Of course the "my shot" reference is a huge one in the Hamilton production.

I didn't snap any photos during the Zoom, but we had a great time as usual catching up.  This theme is super easy to do and a great one even if your guests have not seen the production.  Hope you enjoy reading this post!

Posted by InviteandDelight at 6:44 PM