Clue Party: A Dinner to Die For 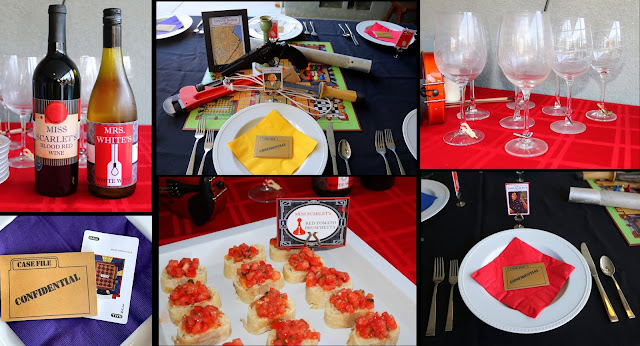 I've always wanted to host a Clue themed party.  It was one of my favorite board games growing up, and my own kids love it now too.  I have always loved the mystery of the game, & there are so many fun aspects to the board game, I knew it would be fun to incorporate them into a dinner party.  Can't wait to hear what you think. 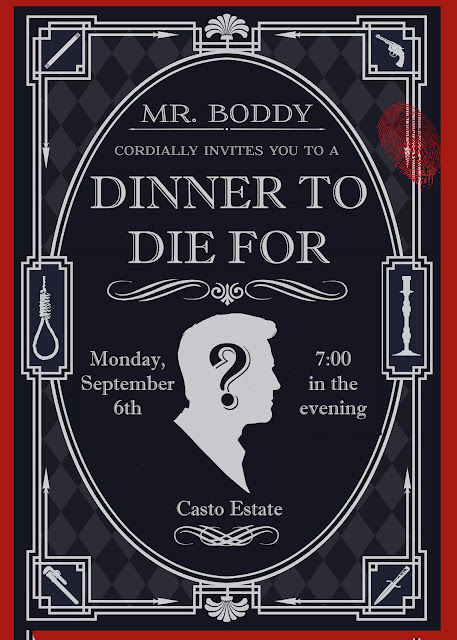 Invite:  The board game of clue (and the movie) centers around a group of 6 guests who are invited to a secluded mansion in New England.  When the guests arrive, they are given pseudonyms: Colonel Mustard, Miss Scarlet, etc.  A seventh guest, Mr. Boddy comes and then ends up dead, so the mystery of "who done it?" begins.  I fashioned my invitation of the idea that Mr. Boddy had invited everyone to a "Dinner to Die For." 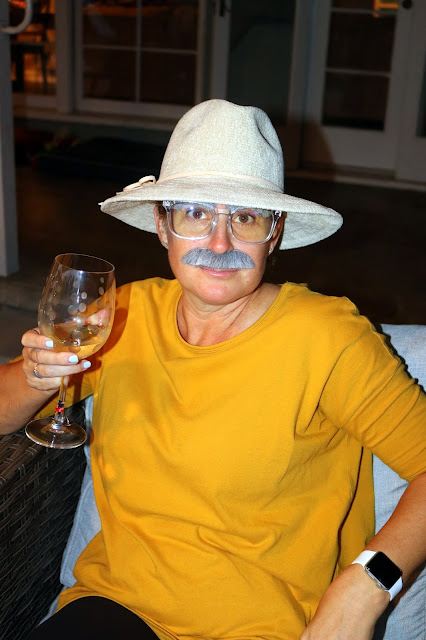 For added fun, I asked the girls to dress up as one of the characters.  I let them pick the character so that it wasn't stressful trying to come up with something to wear in that color. This photo is of course Colonel Mustard! I was having 8 guests at this dinner, and I didn't want any character repeated, so I did invent two characters that are not part of the original game: Miss Black and Madame Maroon. 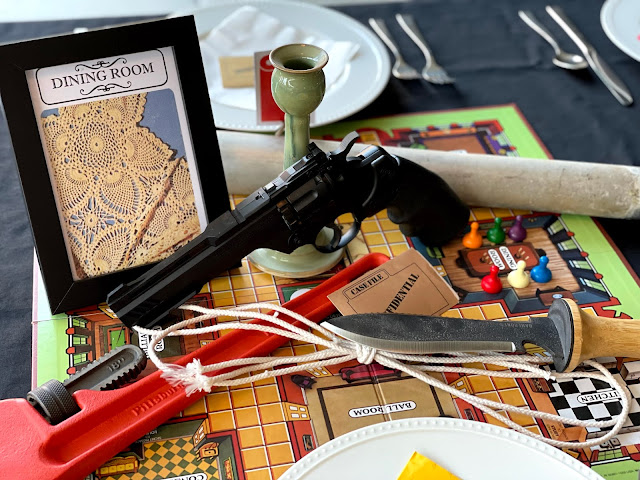 Decor: I hosted the party outdoors because of the uncertainty of the pandemic.  All the guests are fully vaccinated, but fresh air outside seemed like a better option.  I set up my outdoor patio as if it had 3 "rooms" from the game.  The first was the Dining Room. I set the table with a simple black tablecloth and a game of clue in the center.  On top of the game, I had all 6 weapons from Clue: the candlestick, lead pipe, revolver (a cap gun), wrench, knife, and rope.  I also designed the Dining Room card to put in a frame. 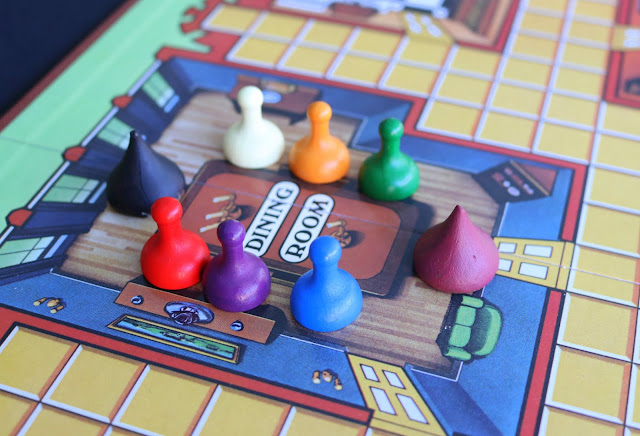 In the "dining room" on the centerpiece, I had all the player pieces sitting around the dining room table just for fun.  For the two players I had to invent so we didn't repeat, I just painted Hershey kisses! 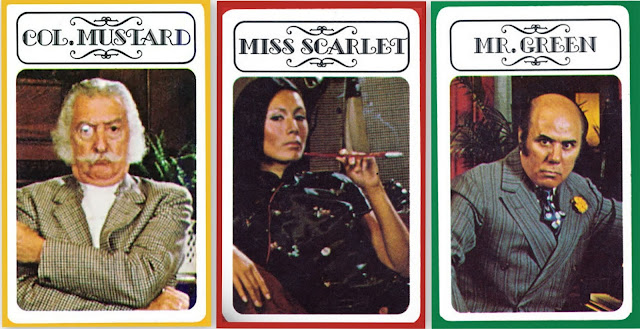 For place cards, I made playing cards to match each of the characters the guests dressed up as.  I could have used the cards from the actual game, but decided to make them with images online instead.  This made them not as clear as I would have hoped for, but it was fine. 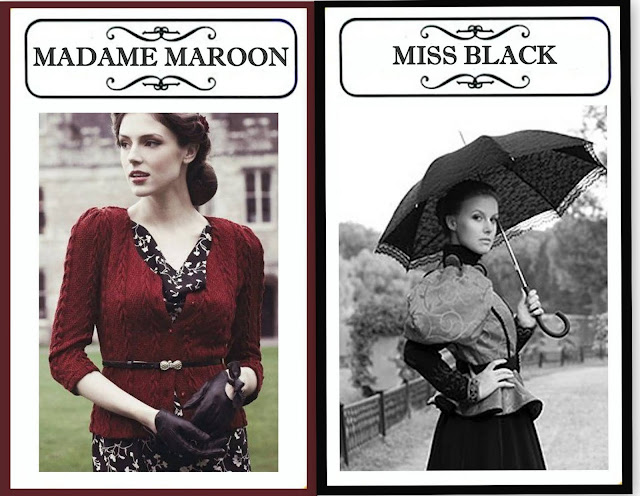 For my invented characters, I just looked up vintage dress in black and maroon, and then used Photoshop to create a card that looked like the real thing. 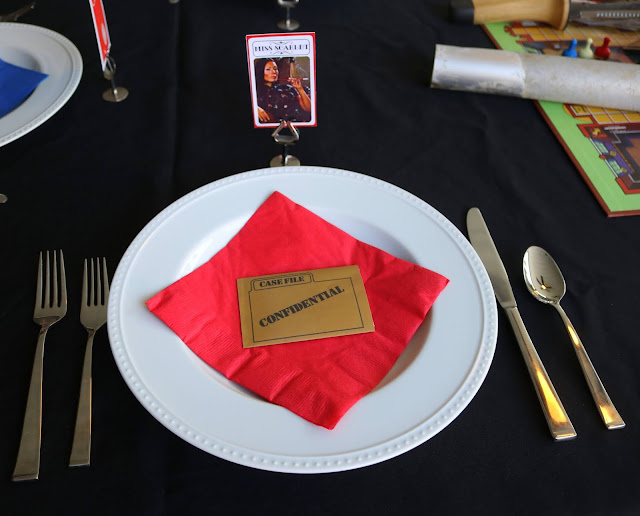 At each place setting, I had a napkin to match the character color.  On top of the napkin was a confidential envelope I created to look like the one from the game that holds the true "killer card, weapon card, and room card" that everyone is trying to guess in the game.  I made the envelopes on Photoshop, and then folded and glued them after they were printed.  This envelope was part
of party activities (keep reading to here more about it!) 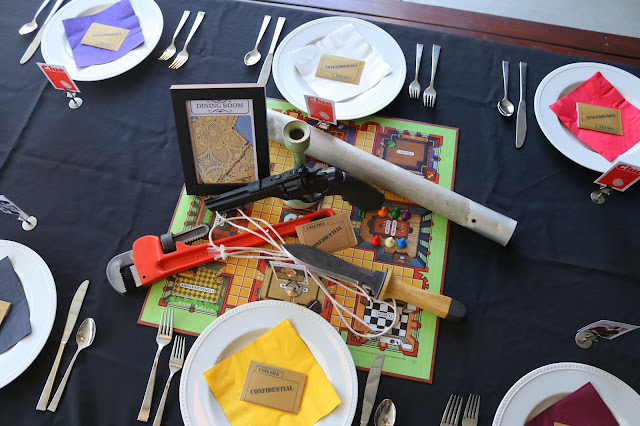 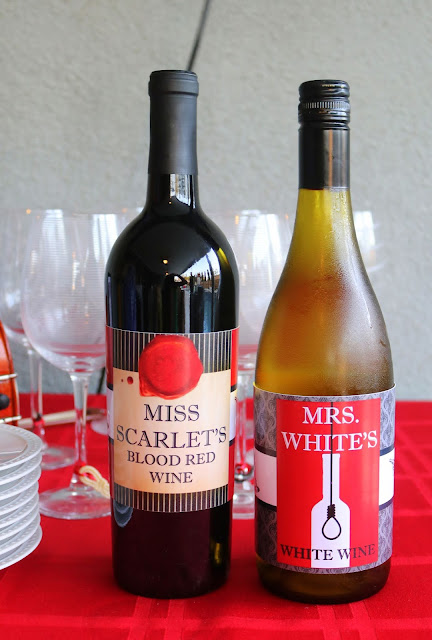 I had fun designing wine labels for this dinner.  I used the white and red characters to weave into my wines.  I served Mrs White's Wine White and Miss Scarlet's Blood Red Wine.  The labels matched the invitation and other party details. 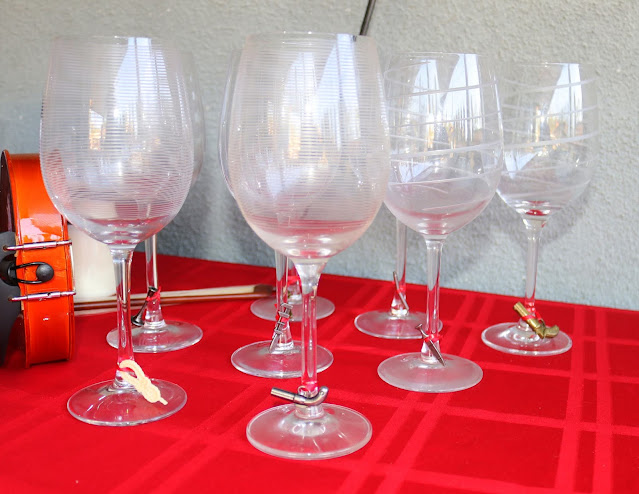 For wine charms, I used the weapon pieces from the board game.  I tied them onto the stem of the wine glasses with ribbon.  My family has 6 Clue games total as my husband picked many of them up for 50 cents from garage sales or thrift stores.  For the extra two pieces, I just used a set that was in gold rather than silver from one of the games. 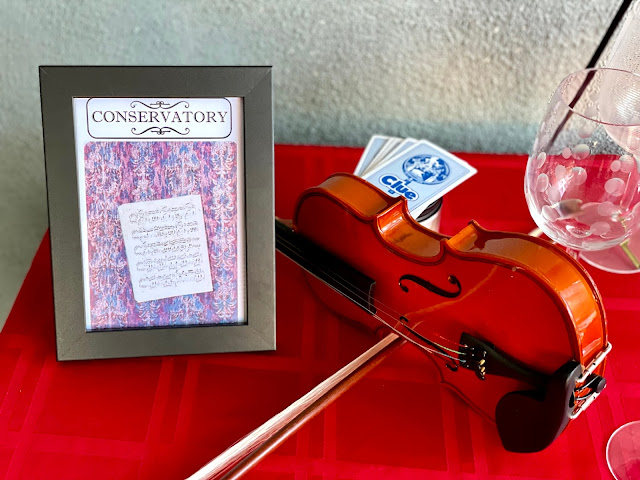 I served my wine in the Conservatory and borrowed my daughter's violin to add to the decor. 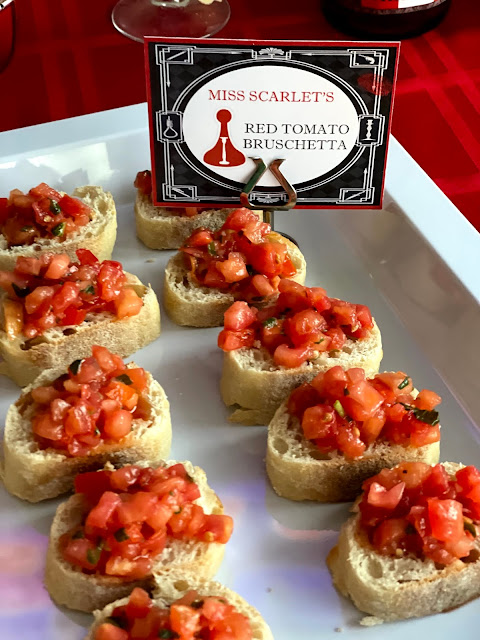 Menu:  Beyond incorporating the names of the two characters into the wine, my menu was built around all 6 characters.  We started with bruschetta as an appetizer, and I designed a menu tag to display it as Miss Scarlet's Red Tomato Bruschetta. 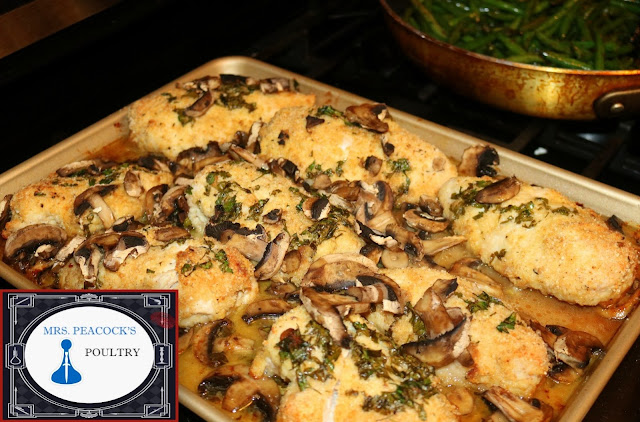 For the main dish, I served a chicken and mushroom dish that I titled Miss Peacock's Poultry.  This is one of the delicious recipes I have made often for dinner parties as it is always a hit with guests. 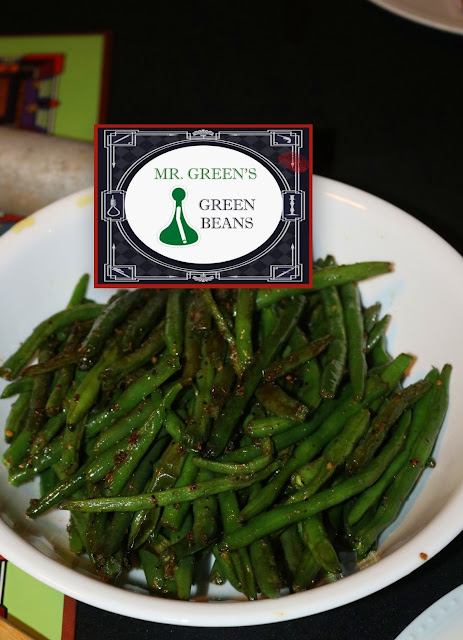 Mr. Green's Green Beans were a side dish.  Simple, but tasty. 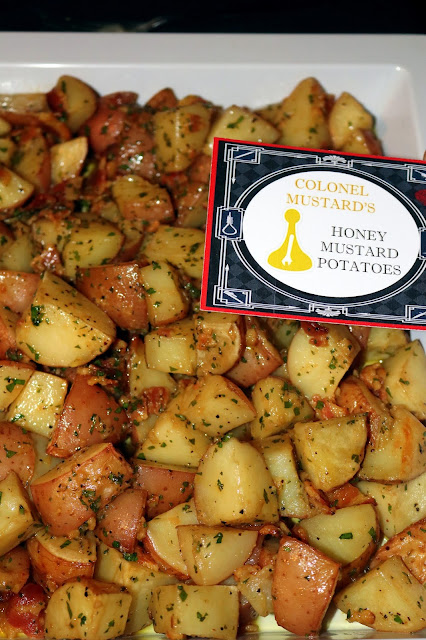 Another side dish was Colonel Mustard's Potatoes.  I found this recipe online and decided to try it out.  I really loved the dijon and honey taste in this dish.  The guests loved it as well. 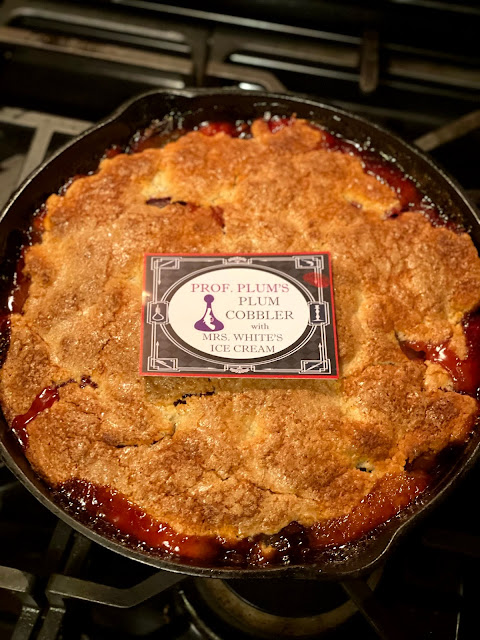 For dessert, I made a plum cobbler to go with Mr. Plum.  I baked it while we were eating the rest of the meal, so it was freshly baked and warm when I served it.  I served it a la mode with Mrs, White's Vanilla Ice Cream.

Party Activities:  We didn't play the actual board game, but I did want to incorporate part of the mystery and the who done it aspect.  I had my daughter put one character, one weapon, and one room card in the game's confidential envelope just as you would if you were playing a true game of Clue.  This left 18 cards to be given out to guests to use as they decipher and guess the who done it.  As each guest arrived, I gave them one card.  I secretly set the timer on my phone for 20 minutes.  When it went off, I instructed any guest that was actually speaking when the timer went off was to show their card to the person they were directly speaking to.  This was a fun way to guests to find out other's cards, but it didn't hinder our ability to just relax and catch up on girl talk. 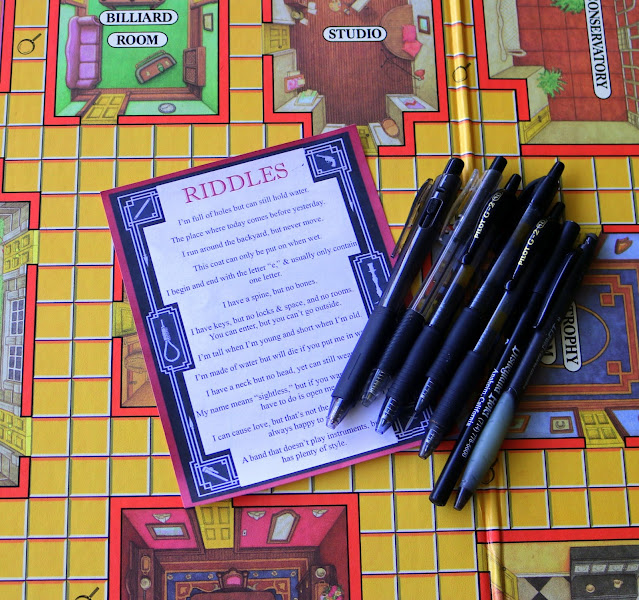 When everyone arrived, we played a game a riddles to give out the next 3 cards.  I gave the girls 5 minutes to figure out the riddles.  The top 3 scorers earned a second card. 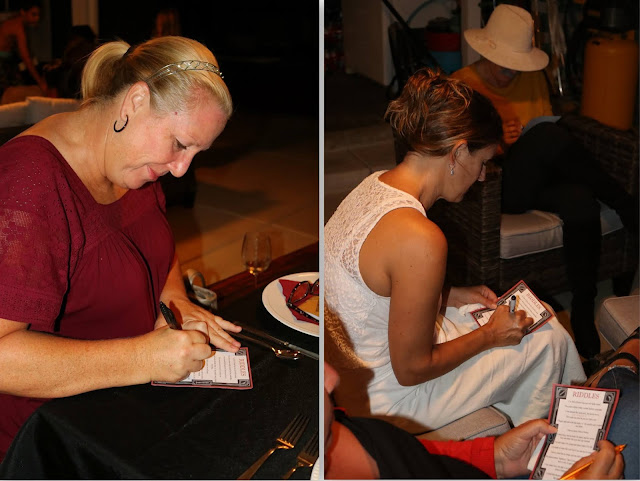 This game took place in the "Lounge" as we were sitting on my patio furniture. 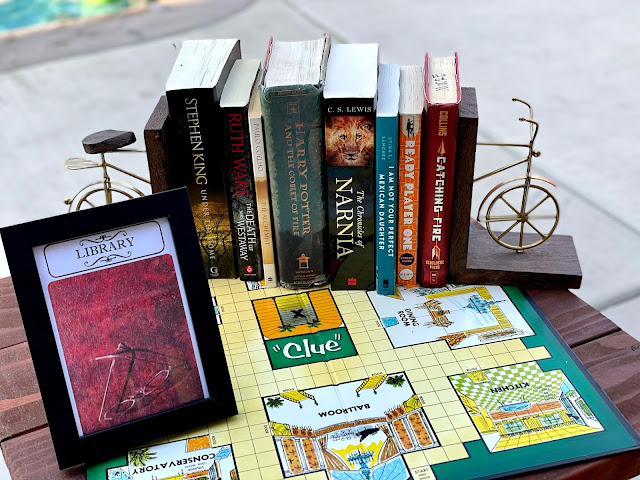 I also created a "Library."  When all the guests had arrived I instructed them that they may visit the library one at a time at any point in the night that they wished.  However, they could only peruse ONE book.  I told them I hoped the chosen a very rewarding book, but it was a mystery. 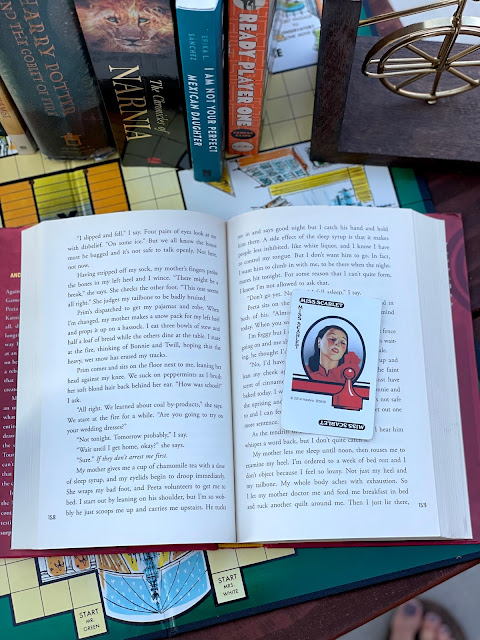 I put the exact number of books to equal my guests in my fake library, and in three of the 8 books, I put another Clue card. 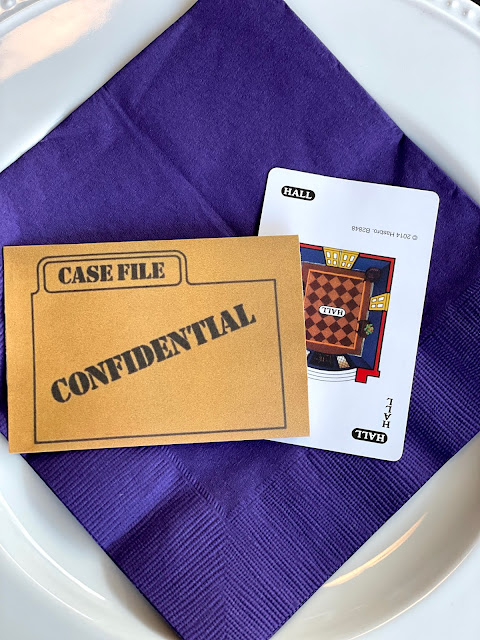 To give out the last of the Clue cards, I put three of them into the Confidential envelopes I made at each place setting.  I put them randomly. 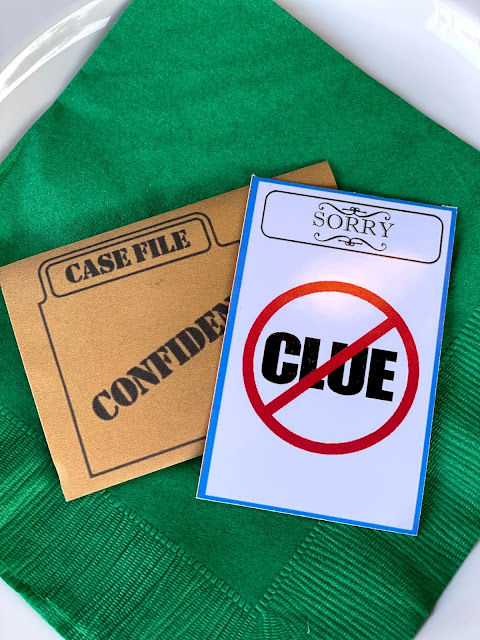 For the other guests who didn't get the Clue Cards, I made just fake cards so you couldn't tell from the outside.  Toward the end of the evening, we went around the table making guesses and showing cards much like occurs in the real game.  Eventually, we found a winner and one of the guests was able to guess the character, weapon, and room correctly. 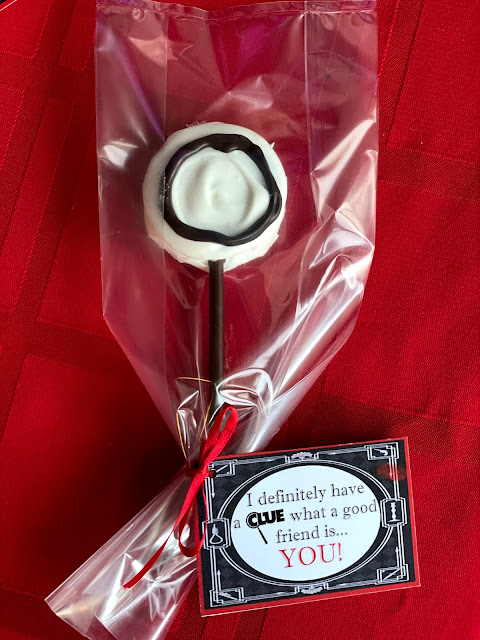 Favor:  As a parting gift, I made spy glasses out of Oreos and Pocky sticks.  I dipped the Oreos in white chocolate (I suggest the double stuffed Oreos) and added a Pocky stick as a handle.  Pocky sticks are super tasty, but very fragile.  I broke many along the way, but they looked good!  A chocolate rim was piped on the white chocolate to make it look more like a spyglass.

I designed a tag that read, "I definitely have a CLUE what a good friend is...YOU!" 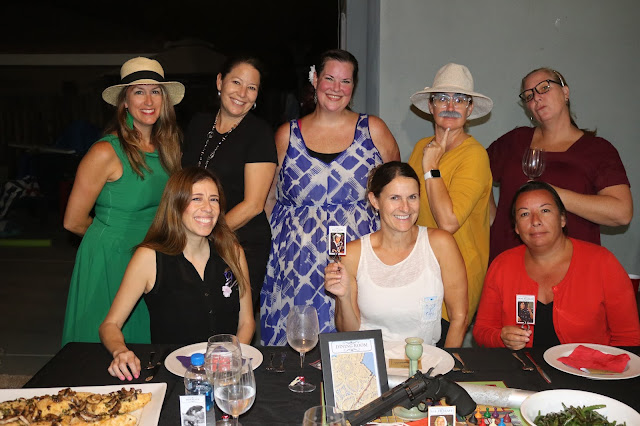 All in all, this dinner was a lot of fun to plan and fun to participate in.  I think all of us enjoyed the time together and the theme.  Definitely add Clue to your roster of fun themes to try with friends!

Posted by InviteandDelight at 8:08 PM