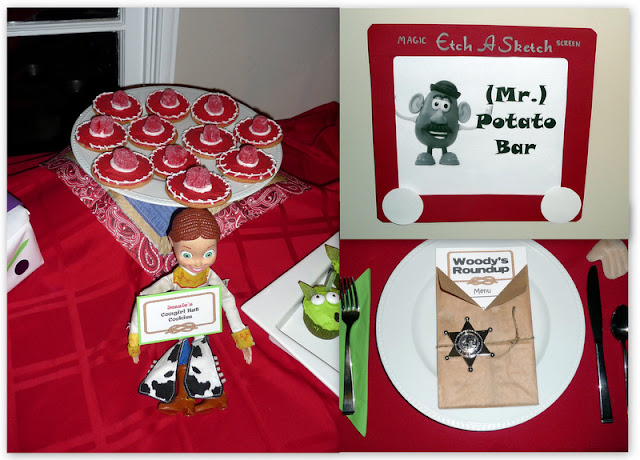 For my monthly dinner this past Monday, I wanted to tie in the holidays and the season, but didn't want to do a plain Christmas theme.  I decided to host a Toy Story movie-themed party and ask guests to bring an unwrapped toy to donate to a child this Christmas.  Boy was this one fun to decorate! There was a lot to do with this theme (sorry this post will be a long one) 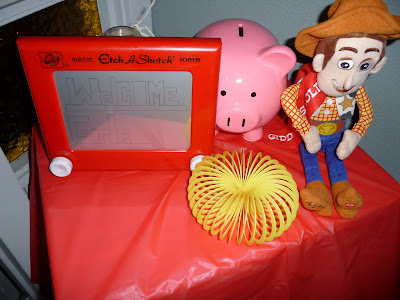 Decor:  As guest's entered, I had a welcome table with various toys including an Etch-a-Sketch with "Welcome Girls" designed on the screen.  I decorated my table with a red tablecloth and Toy Story characters as the centerpiece.  Each place setting had a paper lunch sack cut/folded to make it look like a sheriff's shirt with a sheriff's badge (found at Target) attached to twine.  Inside each bag was the evening's menu which I titled "Woody's Roundup". 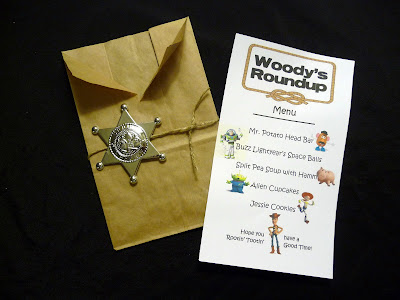 I also had plastic army men parachuting from the ceiling over the dinner table as well as over both serving tables.  Guest's placed their donated toys under the Christmas tree where I had more army men carrying a walkie-talkie.  For each guest's place card, I made an etch-a-sketch out of scrapbook paper with their name on the screen. 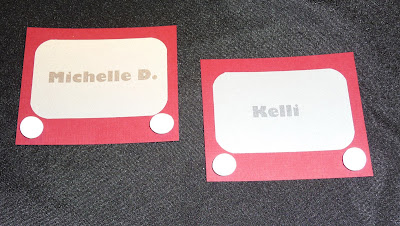 Menu: I served the meal cafeteria -style on two tables.  The first table was the (Mr.) Potato Bar.  The table had several Mr. Potato head toys on it as well as a dump truck with toothpicks inside.  I set out bowls of various vegetables, cheese, and chicken for guests to design their own Mr. Potato head! 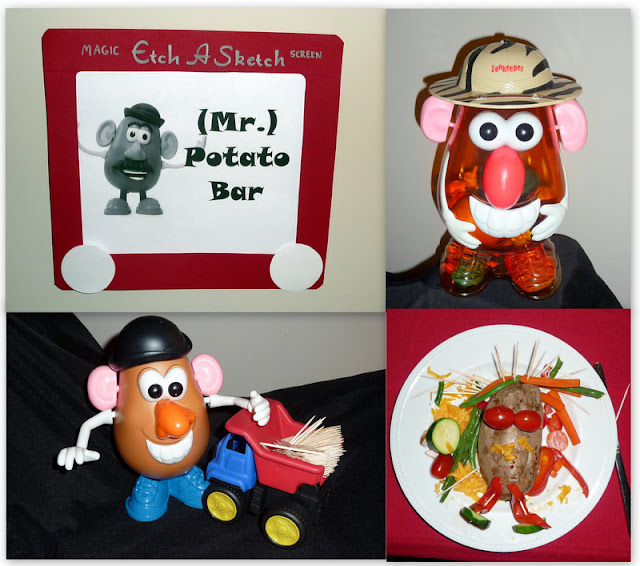 This was so fun!!  Look at the creativity in these... 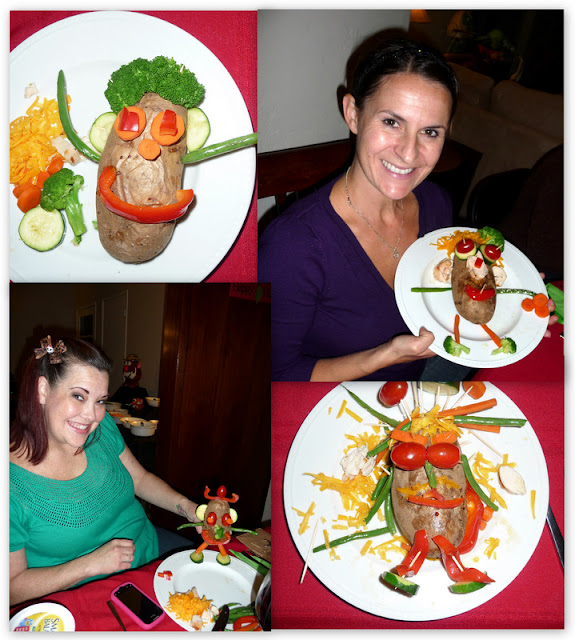 The other serving table was decorated with the Toy Story characters represented in the meal. 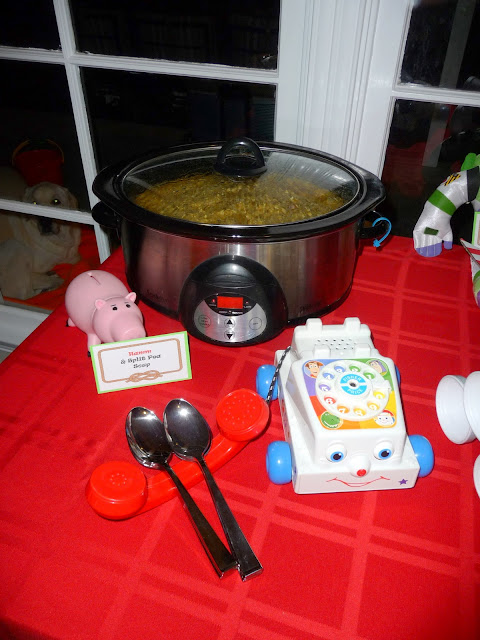 First, there was Hamm and Split Pea Soup. This is my mom's recipe, and it is delicious. I used a toy telephone to hold the soup spoons and of course had Hamm next to the crock pot.

I made melon balls out of watermelon, cantaloupe, and honeydew. I called them Buzz Lightyear's Space Balls.  I served these out of a spaceship I made.  I took a container I bought grapes in at Costco and made a spaceship around it using cut cardboard, butcher paper, styrofoam cups, and colored scrapbook paper!

For dessert, I served Jessie's Cowgirl Hat Cookies.  These were very simple to make.  The only problem I had was finding the red gumdrops for the top. I finally found them at Sweet Factory, but they did not have enough, so I had to buy the crescent shaped ones as well and attempt to melt them/reshape them (not an easy task).  The Jessie doll (as well as the other Toy Story dolls you see in these photos, I borrowed from friends).


Jessie’s Cowgirl Hat Cookies
Sugar Cookie Dough (homemade or store bought)
Flour
Red cookie icing
Large red gumdrops
White decorator’s icing
Roll out the sugar cookie dough between sheets of flour-dusted wax paper to a ¼-inch thickness.  Cut out the cookies using a 2” round cookie cutter and place them on a tray.  Then place the tray in a refrigerator to chill the cookies while you heat the oven to the proper temperature.  When the oven is heated, place the cookies on a baking sheet and cookie about 15 minutes (or designated time on store bought dough packaging). Turn the cookies so the flat surfaces are facing up and frost them with the red icing.  Once the icing has set, add a top to each hat by slicing the domed top off of a red gumdrop.  Then squeeze a quarter size dollop of white icing onto the bottom of the gumdrop and gently press it down onto the center of the cookie so the icing spreads around the base and resembles a white hatband.  Pipe a line of trip around the perimeter of each cookie hat brim.  Then pipe a series of short lines over the top of the trip to resemble white lacing. 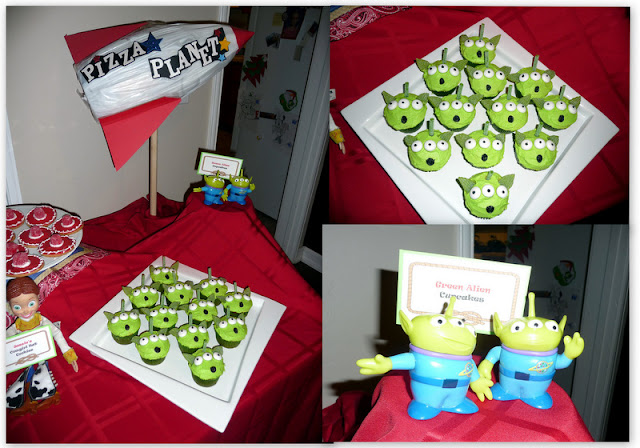 I also served Green Alien cupcakes. These were also very simple to make & they look totally cute!  I think they would be a bit more expensive to make for an entire birthday party, but since I was only making 12, they were not bad.  The Pizza Planet decoration, was handmade by a friend of mine for his daughter's birthday party...so cute!! It is basically made with cardboard and covered with a white trash bag!


Green Alien Cupcakes
Cupcakes
White frosting
Neon Green food coloring
*Mint-flavored chewable candies (found packaged in rolls)
Green apple sour belts
Green apple straws, cut in 2” pieces
Black decorator icing
Prepare your alien ears by cutting ears, shaped like teardrops, from the green apple belts. I used kitchen shears, but you could use a small leaf cookie cutter.  Frost cupcakes and insert a 2” sour straw as the antenna.  Press your ears into the sides of the cupcake.  Line up three mint candies as eyes (*I used Mentos), and dot with black icing for pupils.  Give your aliens an awed expression by drawing on a circle for a mouth. 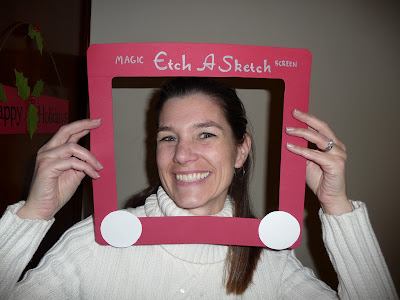 This etch-a-sketch was a cute photo op throughout the evening.  All in all, we had a fun party creating our Mr. Potato heads and acting like kids again. It was also great to bring toys to donate to those that don't have the opportunity to celebrate Christmas the way many of us do.

Posted by InviteandDelight at 6:17 PM

What a great party! I am always amazed at how much you do for decorations. How long does it take you to prepare. Thanks for sharing your pictures and recipes.

I agree, great party idea! I shared your website with a friend of mine who's son is in LOVE with Woody. Thank you Carole for being so creative!

This is so cool I love it