A good friend of mine, and one of our amazing monthly dinner girls, just had major surgery on her ankle, so I thought I would choose a theme in her honor.  Didn't want her to feel alone with her wheelchair and cast, hence...a Fake an Injury Party!! This party was a lot of fun to host, and you could host this theme for many occasions such as a welcome home from the hospital party, a congrats on your graduation from nursing school, a funny birthday party playing up the "you're old" idea, or a party for watching your favorite medical drama TV show!

Invite: Start off with a hospital themed invitation.  Maybe an admittance form to the Emergency Room or a prescription note.  Another idea would be to slice open a gauze pad wrapper (neatly so you cannot tell it is open), and slide in a note with the party details. Or...send a box of band aids and write one party detail on each band aid inside.  The possibilities are endless.  Just make sure you ask guests to come dressed up with an injury for this Fake an Injury party.  This just adds to the fun! 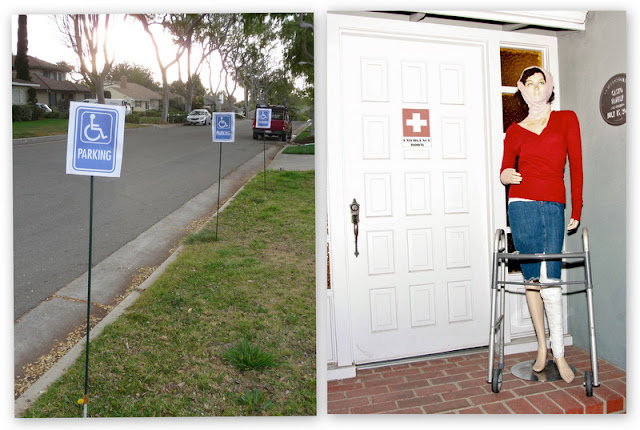 Decor: The decor for this theme started at the street in front of my house where I placed handicap parking signs at all the places my guests would park.  The girls got a kick out of this.  At the entry door, I borrowed a manikin from a colleague and gave it some simple injuries -- bandaids, Ace bandages, cast on the leg made of toilet paper (it's cheaper than gauze).  I placed a walker I borrowed from my mother-in-law in front of her.  A sign on the door read Emergency Room. 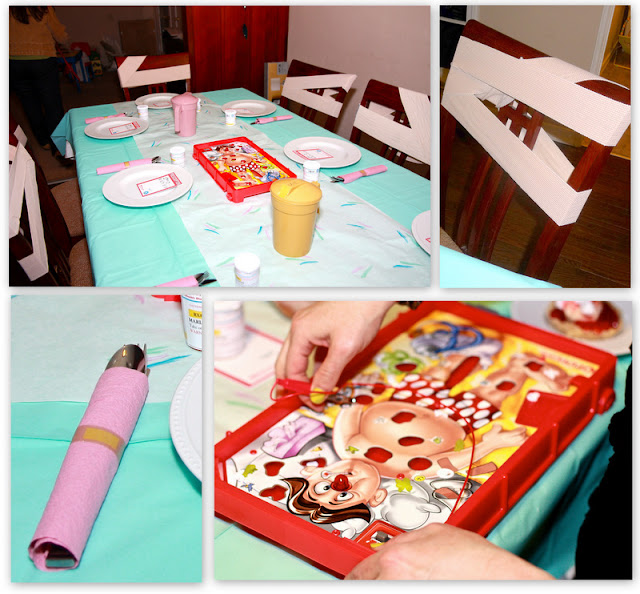 The table was set like an medical exam room.  I bought a plastic bluish/teal tablecloth from Party City and made a runner with exam room paper down the center of the table.  I just asked my doctor if I could take 13 feet of this paper, so this didn't cost me anything.  I also asked my doctor for the pinkish maroon paper exam gown they give to patients. I cut this up into rectangles to use as napkins and wrapped a band aid around to enclose the silverware.  I used the board game Operation as my centerpiece.  I also borrowed some hospital pitchers from my parents and served red and white wine in them.  I wrapped each chair with an Ace bandage just for fun. 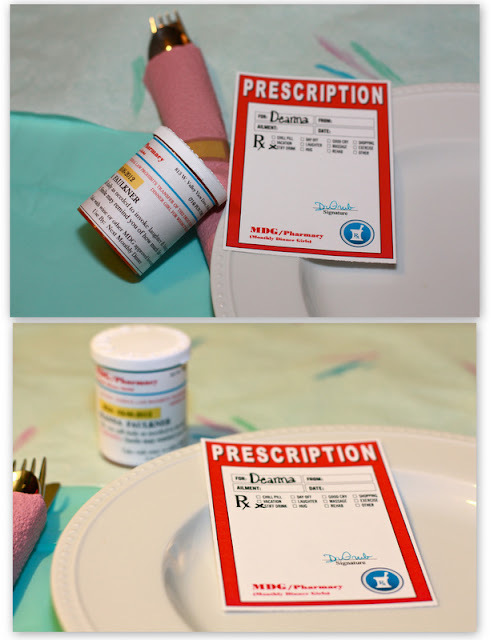 For place cards, I created a prescription slip using Microsoft Word.  I marked each prescription according to the guest's personality/lifestyle, so guests received prescriptions for items such as a "stiff drink" or a "day off".

I also created prescription bottles for each guest.  This is a scan of the label, so the colors as not as vibrant here.  The bottle of pills could be your favor, but I used it as a place card.  I designed the label again using Microsoft Word and modeled it after a prescription label I found online.  The prescription number was the date of the party.  I bought empty pill containers from a local pharmacy and adhered the label using Mod Podge. I filled each prescription bottle with Mike n Ikes because they are shaped like little pills. 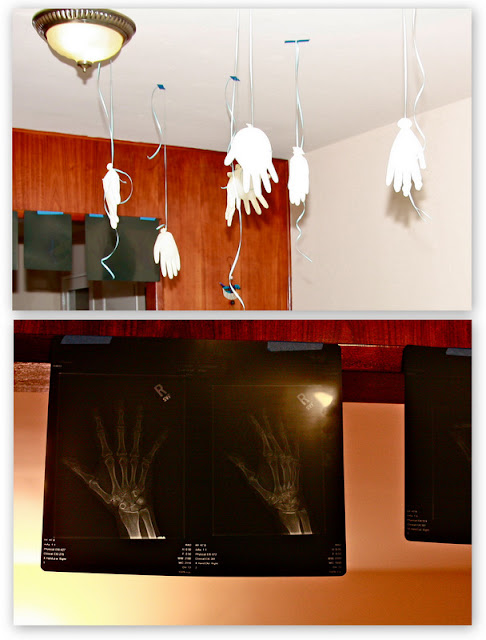 From the ceiling, I dangled medical gloves filled with air (actually my hubby did which is why there is blue tape and not a clear tape that wouldn't show!). The gloves I had were too heavy for helium to make them float, so I just used air.  Just make sure you knot them (which is difficult).  Those I did not knot and just tied tightly with the ribbon lost all air.  I also posted some xays up as more decor. 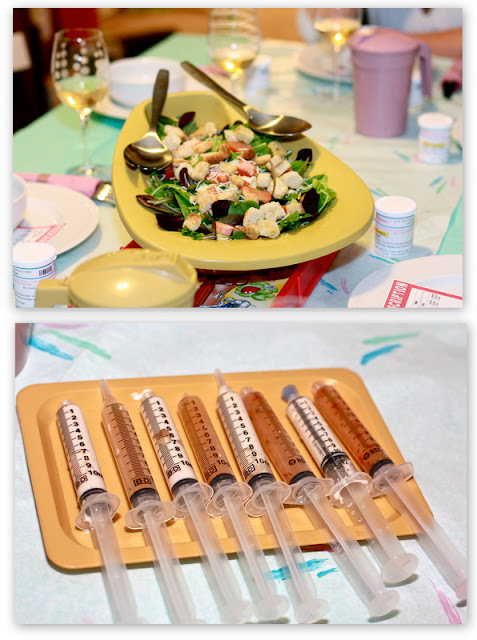 Menu:  I started with a simple green salad and fixin's.  I served this in a hospital urine (new of course!).  I got 10cc syringes and put the salad dressing in these.  A bigger syringe would have been better for this, but I got the syringes for free from a colleague, so I couldn't be picky.  This size was a little difficult to get the Italian seasonings out of though.  The Ranch dressing worked fine. 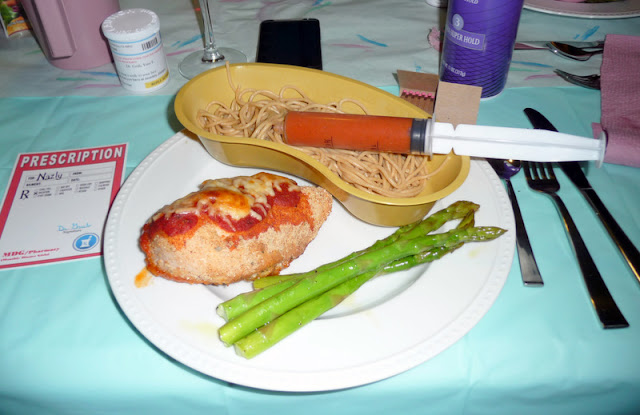 For the main course, I made Chicken Parmassan. I served this with roasted asparagus and spaghetti. To tie in the hospital theme, I served the spaghetti in a hospital bowl and the spaghetti sauce in a syringe (I chose this meal mainly so I could have something red in the syringe).  The syringes I used for this were made for taking alcoholic "shots", so they had a bigger opening.  I purchased them at Party City.  Note: I did have to put the spaghetti sauce in the blender to make it thin enough to work. 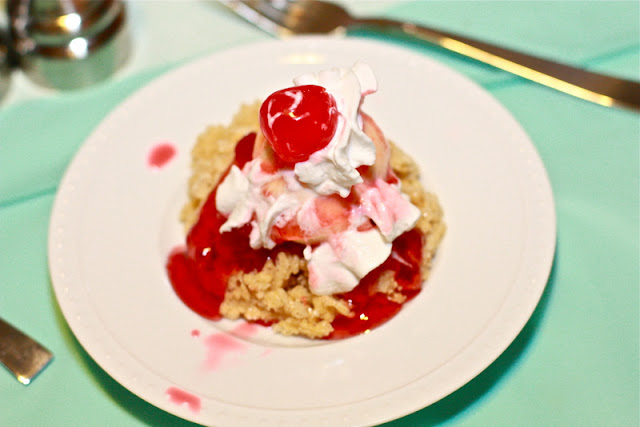 When I was thinking about what to have for dessert, I thought of the slogan for Rice Krispies -- Snap, Crackle, Pop -- and thought this idea went well with my theme!  I looked on the Rice Krispies website and found this yummy recipe that incorporated both the cereal as well as strawberry topping which could look like blood.  I made Rice Krispie treats according to the general directions, but then pressed them into a 10 x 15 x 1 inch pan. I didn't have a circle cookie cutter big enough (3"), so I used an empty can of pears with the lid cut out.  Then just make a normal sundae.  I used fat-free vanilla yogurt.

As usual, we had a great time at this party.  If money is not an issue, you can order all these things online and save yourself a lot of time. Money is ALWAYS an issue for me, so I handmade and borrowed a lot of the items.  Would love to hear your opinion about this party or hear how you've incorporated these ideas into a similar party.  Just comment below.

Posted by InviteandDelight at 10:37 PM

Oh my word, this party looks hilarious! You are so clever. This makes me want to start a fun party group like yours! Awesome! (o:

What a great party idea. I did find the bigger syringes cheaper at ezsqueeze.com

This looks like a ton of fun and sounds like a great party for the Grey's Anatomy season 8 premiere. I think I might just have to do this. :)

I don't know how I got to your blog (something on Pinterest) but now I've been reading and reading your party ideas and can't stop. You are so creative!! I can't believe you've been doing this EVERY MONTH for SIX YEARS. How wonderful for building strong and FUN relationships!!! Am thinking about how I can add some of this to our life here...

OMG!! This is so unbelievably clever!! I love, love, love how you carried out the theme. Great job. I, too, found you via Pinterest and am now following you. Your creativity is nothing short of inspiring!

The show colors are royal blue, red, and white, so I went with that color scheme. At the front door, I had a table set up with a first game just to enter. It is called Breakfast Scramble and guests had 60 seconds to put together the front of a cereal box cut into 16 rectangles. I set out a sand timer for guests to time themselves.
Buy LOL Coaching
cheap elo boost

Almost everything about this party is awesome, super creative, cute!

However, it is important to think about how you could make others feel with anything you place in public, ESPECIALLY the handicapped signs. If they had been inside your own home, or if you had not chosen to showcase them, that's one thing. But the way you placed them in the street for actual parking is extremely degrading to people who actually need accessible parking. Just something to think about if anyone else chooses this theme.

All in all, WONDERFUL, but playing at being handicapped could be very hurtful to many people.