Ready for the "Souper" Bowl?

The Super Bowl is less than a week away, and while I am very bummed that my 49ers could not pull off a win to be playing, I still love watching the game.  Every year, the February monthly dinner falls just after this football game, so last year, I decided to theme my dinner the "Souper" Bowl. I had already done a Monday Night FOODball theme back in the first year I started hosting these dinners, so this one did not really have anything to do with football beyond the name. However...you can see it was still a lot of fun (and super yummy!) 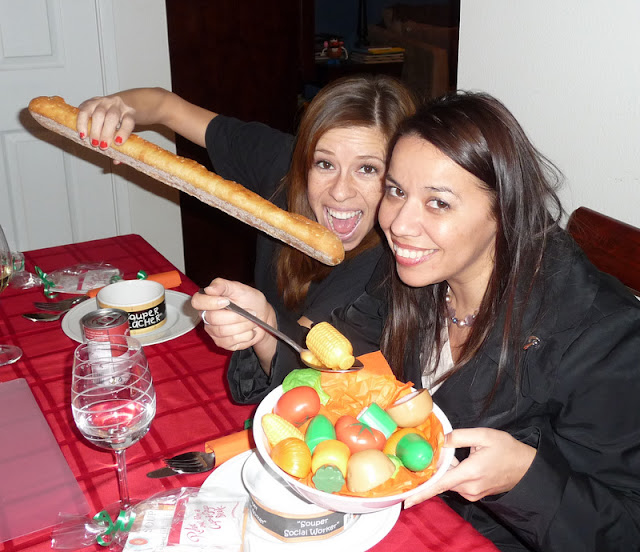 Invitation:  Why not make a recipe card with party details as your recipe? For an example of this, see the post of my daughter's cooking-themed birthday party. If you wanted to stick with some link to the football game, you could craft a sports ticket to the big game with all the details.  That would be cute.

Decor:  I wanted to have a simple table because I wanted to have bread and chips handy for guests to use for their soup.  The only centerpiece I had was a pretend bowl of soup created with my daughter's play vegetables and a little orange tissue paper. 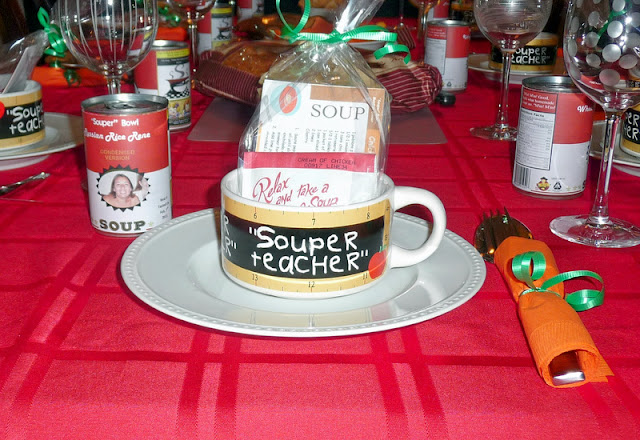 Each place setting, I set with a ceramic soup bowl for each guest.  All but one of the guests that attended this particular dinner were teachers, so I found some cute bowls that said "Souper" Teacher.  For the one guest that was not a teacher, I just scrapbooked over the teacher part so that it said her career (a little cheesy I know, but these are my good friends--they are well aware how cheesy I am!).  Inside the bowl, I wrapped a package of instant Chicken Noodle Soup mix as well as the 4 recipes for the soups we had at the party. I rolled the silverware in an orange napkin and tied it with green ribbon to somewhat look like a carrot. I could have done a better job with this if I had more time, but I was rushed on making them. 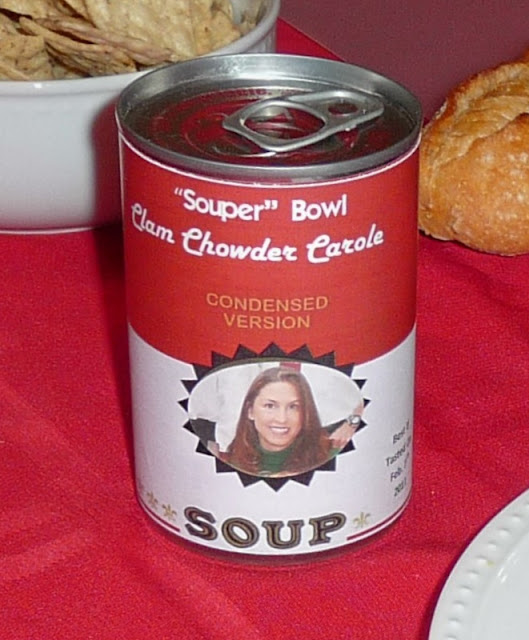 For the place card, I bought cans of chicken noodle soup and created personalized soup labels for each guest. I used alliteration, so the labels identified the soups as "Minestrone Michelle", "Kidney Bean Kelli", etc. I cut out a photo of the guest and pasted it in the middle graphic.  I also changed the expiration section to read "Best if Tasted By February 7th, 2010" which was the date of the party.  This was all done with a soup label I found on Google and then using Microsoft Word to edit it (remember, I don't know Photoshop!!)

Menu:  I served 3 different kinds of soups for the main meal and one for dessert.  Each one was a little different, and honestly, they all got rave reviews.  I just had crock pots set up on a table with all the fixings for each soup, so guests could pick and choose which soup to start with.  Here are the recipes and the recipe cards I made for each guest. 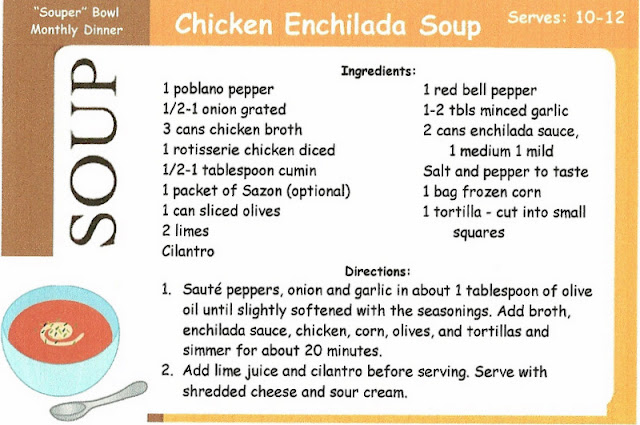 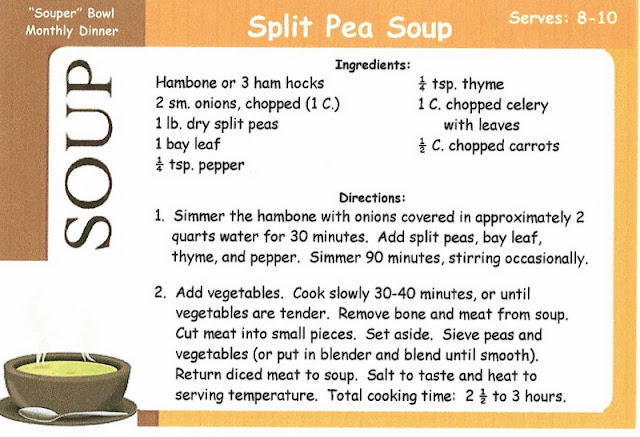 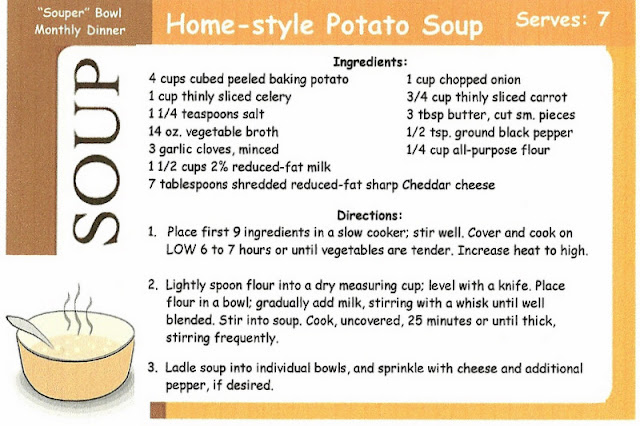 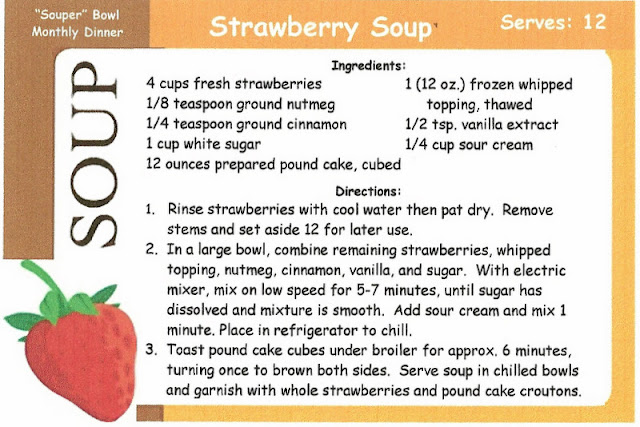 The Split Pea recipe I have made several times and it always tastes good. The other soups were fairly new to me, but all were delicious.  The dessert was just a recipe I found online, but it was super yummy!! I served this soup in a martini glass just for fun.

Activity/Game:  I like to have small activities at the monthly dinners just for laughs.  We had a vote for which soup won the "Souper Bowl" of course, but we also played a game with alphabet soup.  Each guests used spoon to scoop out two spoonfuls of uncooked Alphabet soup.  They then had a certain amount of time to craft as many words as they could using the letters in front of them.  Each guest got a point for having the most words that no one else had.  We had some good laughs with this one.  The winner had to do all the dishes for the evening...just kidding...they got a jar of homemade soup mix.  I had to search a bit for the alphabet soup (they were too expensive online for me), but I ended up finding the packets at Albertson's for less than $1.  Here is a scan of the sheet I made for the game...

All in all, it was a very simple, but fun evening.  I made the Split Pea and the Strawberry soup ahead of time, so this cut down on the day-of craziness.  If you are interested in throwing a "Souper" Bowl party for Sunday's big game, maybe this is your ticket! Enjoy!

Posted by InviteandDelight at 9:36 PM