Hosting a Cowboys and Indians party was such a blast.  This is a super easy theme if you are looking for a fun dinner party or kids birthday party.  Everyone loves a little rivalry which makes the games fun, and dressing up to this theme is not difficult for guests.

Invite:  Cut a brown paper bag the size you want your invite and write the party details in black marker.  Add hieroglyphics to the corners or just a simple bow and arrow.  Then crumple the bag to look like old leather.  A simple and inexpensive invitation.  You could also fashion your invite after a "Wanted: Dead or Alive" poster, but I used this idea as my place card, so I didn't want to repeat. 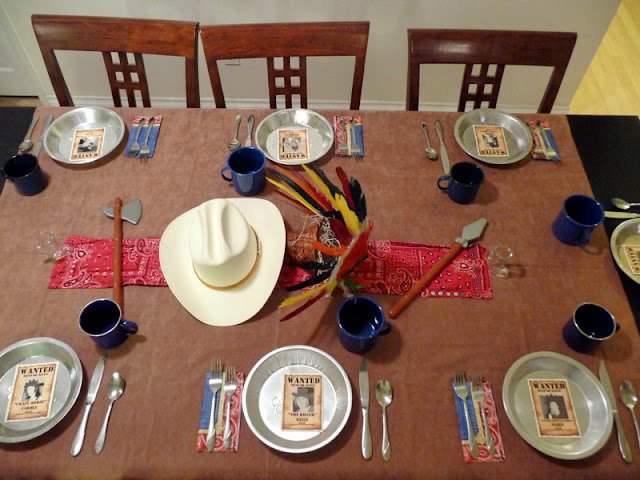 Decor:  I set the table with a black cloth tablecloth and then placed a smaller square of brown suede fabric on top.  I found a scrap of bandana fabric I used as a belt years ago at a cowboy-themed sorority party, and also spread it out on the table.  As a centerpiece, I placed a cowboy hat, a cornucopia, and an Indian headdress/tomahawk I bought in the kids section of Target.  I found some shot glasses in the shape of cowboy boots and added these to the table as well. 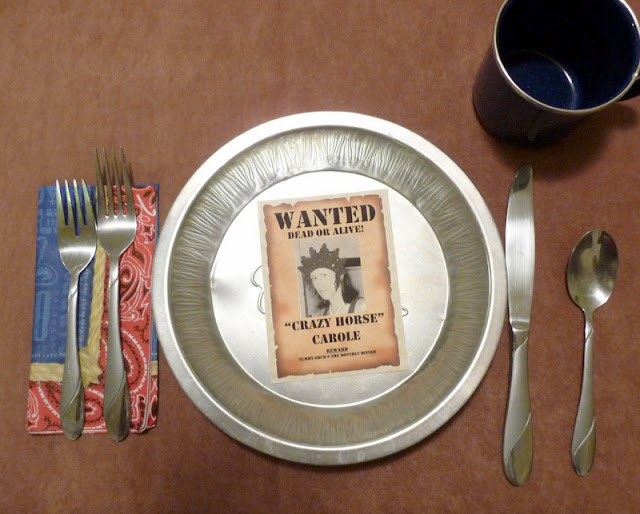 At each place setting, I use metal pie tins as plates and camping mugs as glasses.  The bandana printed napkins I bought at Party City.  I created a mini Wanted Poster as each place card.  I found individual photos of the guests where they were not smiling and added an Indian headdress or cowboy hat depending on the RSVP of the guest as to which side they would come dressed to represent.  I added funny names that also went with the theme such as "Dances with Navaho Nazly" and "Last of the Mohicans Michelle" as Indian examples, and "Wild West Wendy" and "Double-Dealing Deanna" for a couple cowboy examples.

Games/Activities:  You can't have a competition party without having some theme-related games! Our first game was Hieroglyphics (in other words Pictionary) with words that went along with the theme.  I had my husband make up the words before the party, and this was not a great idea.  Many of them were too easy.  If I were to do it again, I would probably go through the real Pictionary game stack to find words that fit with the theme or just do random words.

Our second Indian-themed game involved a bow and arrow and a buffalo.  I drew a buffalo on a piece of butcher paper (as you can see I am not a great artist), and taped it to my TV cabinet.  I bought a cheap bow and arrow from Target.  The arrow had a suction piece at the end which obviously wouldn't stick to the paper, but we just eye-balled it for points.

The last two games were cowboy-themed.  The first was to use a lasso to "catch" a horse. I used a regular rope and a kid's rocking horse!!  Guests got three tries to see if they could lasso the horse around the neck.  This was super funny!  The final game (no picture of this one) was horseshoes.

Menu:  I don't have photos of most of my menu, but it was delicious and I totally recommend the recipes. As an appetizer, I served beef jerky. I started guests with a fruit plate made to look like a bow and arrow.  Then moved on to the main dish which was Cowboy Stew and cornbread.

To make the bow, slice the cantaloupe in crescent slices leaving the rind on.  Then use a large sewing needle to thread dental floss through the ends of the cantaloupe and tie to make it look like a bow.  To make the arrow, cut an orange in half.  Then cut the orange again to have a ¼ inch circle.  Cut this according to the small triangles, but leave the rind on.  Thread these pieces one at time on the skewer to look like feathers at the end of an arrow.  Cut a strawberry in half lengthwise and thread onto the skewer at the top above the oranges.  Place on a plate and serve.
Cowboy Stew 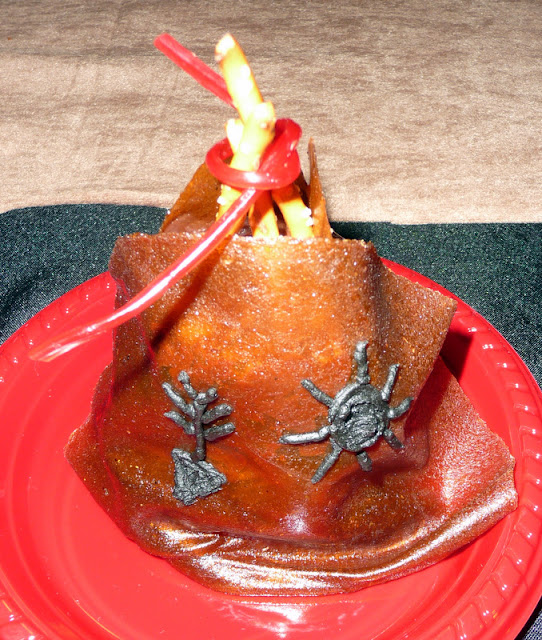 For dessert, I made each guest a cupcake teepee.  This is not a very good picture, but it was great looking in person.

Bake cupcakes as directed on box.  Remove wrapper from smaller cupcake and stack upside down on top of frosted lower cupcake.  Frost the top cupcake.  Insert the 3 pretzel sticks at angles so they cross at the top, tying them together with licorice.  Wrap the fruit leather “hide” around the cupcakes (it took me two fruit roll-ups).  Using a writing tip, decorate the “hide” with designs. 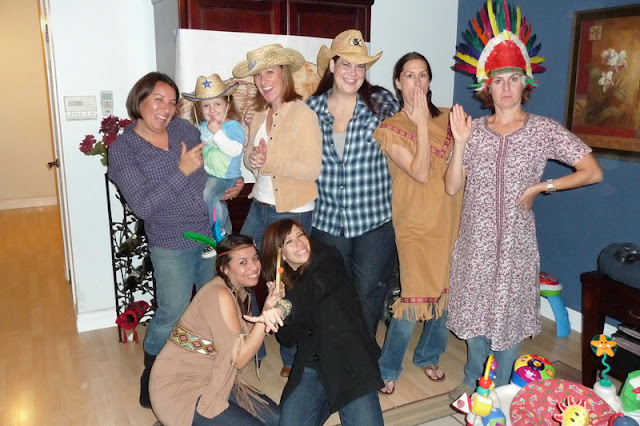 We had a great time at this party.  The rivalry was fun, and there is so much you could do with this theme.  I would love to do it again for a birthday party or just a random get together!  Hee-Haw!

Posted by InviteandDelight at 3:14 PM

Love your teepee cupcakes! So creative!

your table setting is simple PERFECT! and those games--- too much awesomeness! I wish I could convince my friends into such sensational silliness!

Just stumbled upon- what a clever and unique blog- great ideas!

Great ideas ! Such a fun party theme ! Who says cowboys & indians parties are for little boys ?!! ;)