It has been a super busy month, so this month's monthly dinner snuck up on me.  I didn't have a theme and was in panic mode with only 4 days to go before party time...hence, the going down in flames/barely surviving theme of Mayday! Mayday!...an S.O.S Party!  It is May, so it seemed to go with the month too!  Must say I am pretty proud of the fun decor of this party. 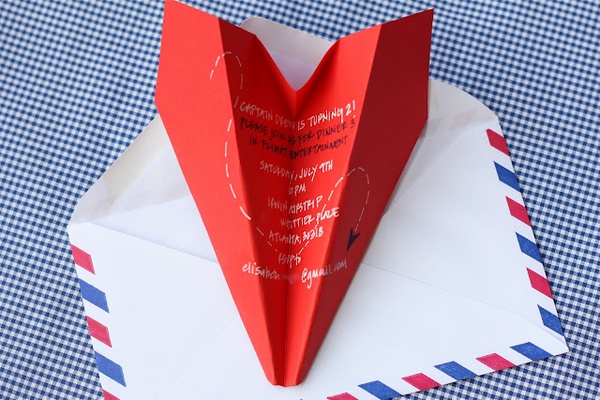 Invite:  Since I was so last minute in choosing a theme for this party, I did a simple Evite invitation, but an paper airplane would have been my invite had I had more time.  This is a super cute sample of what I would do. 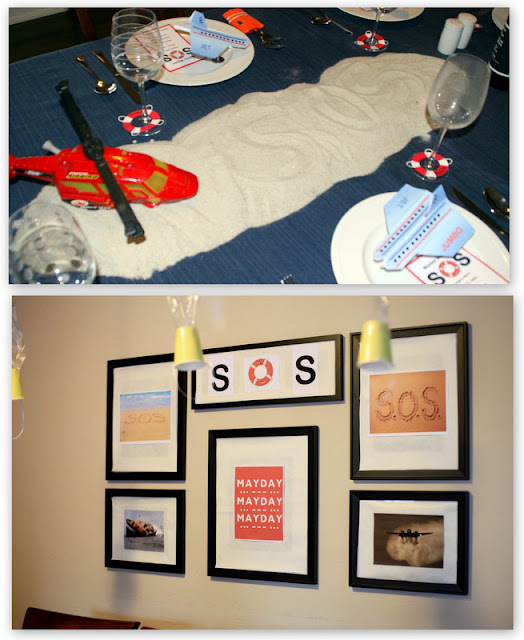 Decor: I set my table with a blue tablecloth and used sand from my daughter's new sandbox to make an island as a centerpiece.  I carved S.O.S in the sand and placed a toy rescue helicopter near it.  To cover my
frames on the wall, I used white wrapping paper cut to fit, and printed Mayday-related pictures and words to place on top. 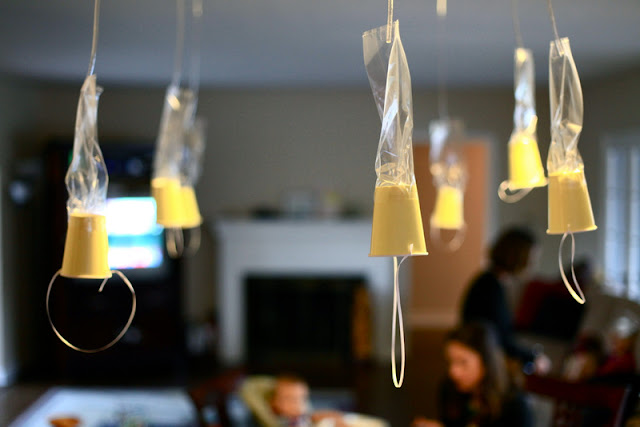 From the ceiling, I made airplane oxygen masks -- so fun!  I bought yellow cups from the Dollar Tree and wrapped favor bags bought at Michaels around the bottom (secured with clear tape).  I punched holes in the side of the cup and tied a write ribbon as if it was the elastic part that goes around your head.  You could use elastic, but I wasn't planning to have anyone wear them, so it would have been a waste of money for me.  I did buy clear tubing from Home Depot to dangle from the ceiling and attach to the bag.  This was $2.50 for 20 feet, so it was super cheap. 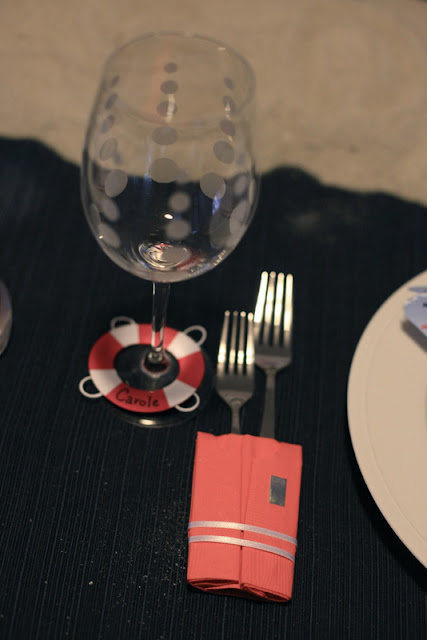 At each place setting, I folded an orange paper napkin to look like a life jacket. I just "winged" it (fun pun for an airline party!). I didn't have a pattern or anything.  I used white ribbon to hold it closed, and cut a small rectangle out of shiny silver scrapbook paper to add a little detail.  This jacket held the forks.  I also made life rings to use as wine charms. I used my Cricut to cut an "O" out of red and white, then cut the white to make the stripes.  I used a thin letter "O" in white for the rings on the side.  If you have a cartridge that has an actual life ring in it, you can do it that way, but I don't so I did it with letters. 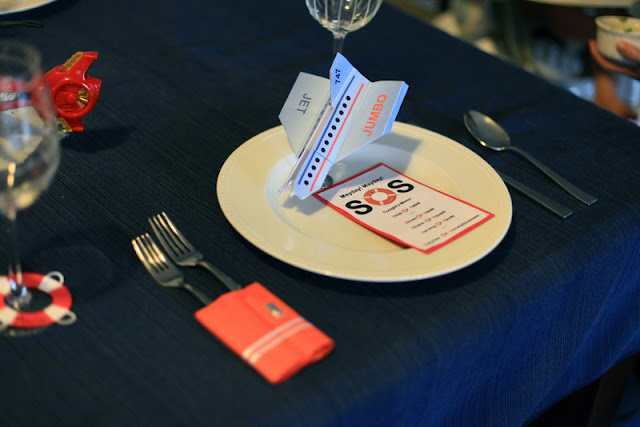 On the plates, I had the menu which followed the S.O.S. initials (more details below). I also folded a 747 airplane and elevated the back of each to make it look like it was "going down".  I found the pattern for these and the instructions to fold them online at Amazing Paper Airplanes. You can use these as a game during the party to see who's plane could fly the farthest before crashing since it goes with the theme. 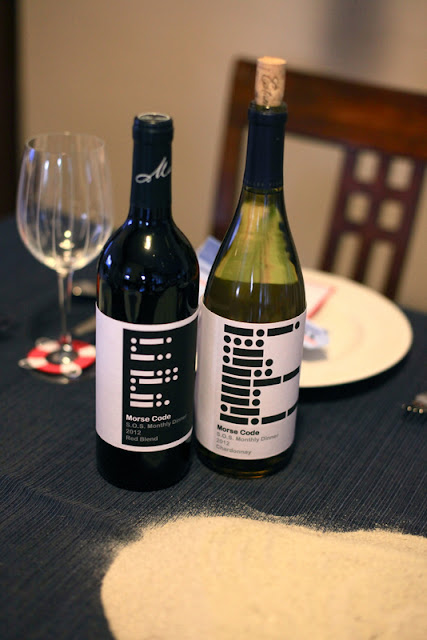 I also made a wine label using Morse Code.  I found the basic label on Google images, and just used a text box to add the party title and date. 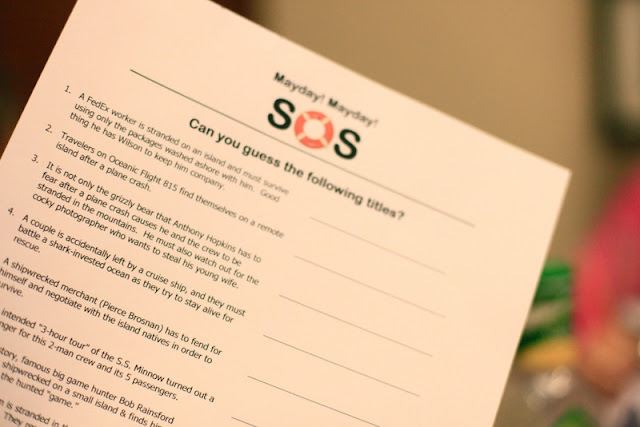 Activity/Game:  As a fun game to tie in the theme, I created an activity where guests were challenge to guess the movie, book, or TV show presented in the clues.  These were all survivor/mayday stories such as Lord of the Flies, Lost, Swiss Family Robinson, Castaway, etc.

Menu: I also like to my menu to go along with the theme, so I played up the S.O.S and each item followed these initials.  We started with Soup Or Salad (although most of us had both).  The soup was from Trader Joes - Roasted Red Pepper soup.  Garlic salt, and a small package of mixed vegetables were added to give it a little extra.

The main course was Slices Of Steak, Serving Of Spuds, and Slivers Of Squash.  These are yummy recipes I totally recommend...

Grease a 1 1/2 quart casserole; set aside.  For sauce, in a small saucepan cook onion and garlic in butter until tender.  Stir in flour, salt, and pepper.  Add milk all at once.  Cook and stir over medium heat until thickened and bubbly.  Thinly slice potatoes.  Place half the sliced potatoes in the casserole dish. Cover with half the sauce.  Repeat potato and sauce layers. Bake, uncovered, in a 350 degree oven for 40 minutes.  Uncover and bake for 15-20 minutes more or until potatoes are tender.

For cheesy potatoes:  Prepare as above, except stir 3/4 cup shredded cheese into thickened sauce until melted.

Slivers Of Squash
Cut up green and yellow squash that I steamed. 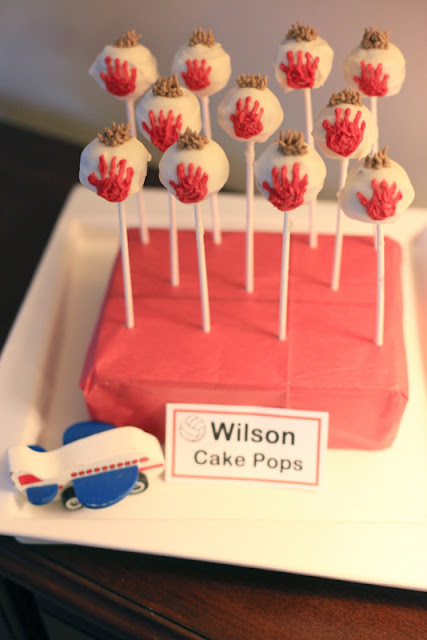 For dessert, Surprise Of Scrumptiousness, I made cake pops to look like Wilson, the volleyball from Castaway!  I didn't bother with the black lines on the volleyball. I simply made the vanilla cake pops using my sister-in-laws Cake Pop maker, melted white chocolate as the coating, and then used tan and red frosting to draw the hand print and pipe on the dead grass of Wilson's hair. I used a toothpick to carve out the eyes and mouth after the red had set a bit. These were tasty! I made a few pops for each guest to make sure I had enough. 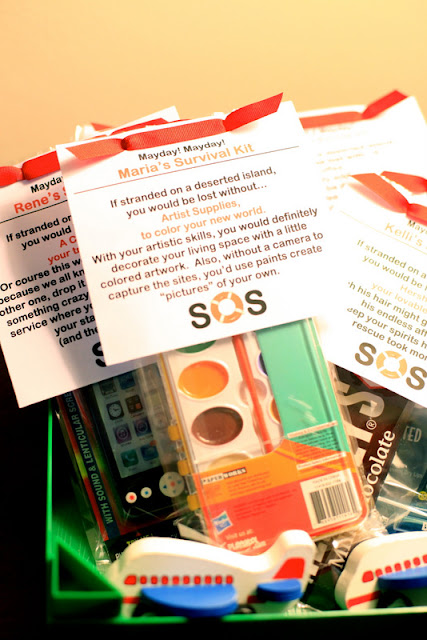 Favor:  Originally, I was planning to do a generic Survival Kit favor with a bottled water, granola bar, and a box of matches.  I changed my mind last minute and decided to make individual survival kits for each guest (I only had 7 at this dinner). The idea was, what was one item if they were stranded on a deserted island that they couldn't live without. Most were funny things I bought at the Dollar Tree -- a Hershey bar for a friend that has a dog named Hershey, a toy cell phone for my friend that can't live without checking Facebook, etc.

This was a super fun party.  You could adapt it for a kid's airplane birthday party as well if you took out some of the survivor aspects. For those of you that are new to my blog, remember I try to keep my parties inexpensive, so some of my decor is cheesy looking -- I am okay with that!! I am not trying to win any awards here or anything, I just want to have fun with my friends over dinner. Most of the supplies for this party were purchased at Dollar Tree or with coupons at Michaels.  The only "expensive" item was the flank steak, but it's so yummy, it's okay!!

As usual, if you would like any of the items discussed or have questions, just email me.  All tags/menus/etc are made on Microsoft Word--nothing fancy. Happy May everyone!

Posted by InviteandDelight at 9:55 PM

I LOVE the hanging oxygen bags!

What fun fun fun! All of your details are just DELIGHTFUL!!!! the oxygen masks are beyond adorable!

This is the most clever theme! Where did you find the little wood airplanes???