I had always wanted to try one of those Murder Mystery Dinner parties, so I decided to host one for my monthly dinner in November of 2010.  I did some Internet research on various kits to find one, and I decided on Pasta, Passion, & Pistols created by University Games.  This kit was in my price range, had positive reviews, fit the amount of people I would have at my dinner, and the overall plot sounded interesting. 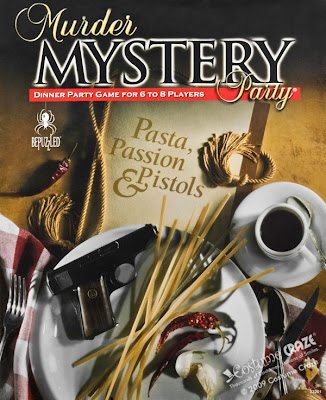 The kit comes with invitations, scripts, recommended menu, and all the police reports/secret clues that you need to successfully play the game. You can even reuse all the materials (except the invitations) to host another party with a different group, so it doesn't have to be a one-time use thing.

Invite:  Although the kit came with invitations, I did not use them because I like to create my own.  The setting of this murder was an Italian restaurant in New York City, so I went with an Italian theme. All images I found on Google and adapted using Microsoft Word.  I sent only the front (the invite on the left) first.  Once I knew who could make it, I sent the invite again with the character they would play printed on the back of the invite (right). All information is given on the Party Planner sheet included in the kit.  By the way, even as the party host, I did not know anything about the plot, killer, details, so I was also able to partake in the fun of the evening. 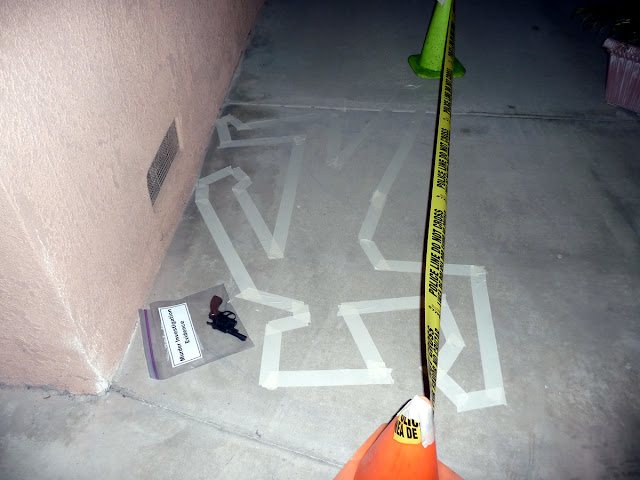 Entry: In front of my entry door, I created a body outline with chalk and set up crime scene tape around it.  I also set out an "evidence bag" which was a zip lock bag with a toy pistol inside of it.  On the door, I created a restaurant sign welcoming guests to La Speranza Restaurant. 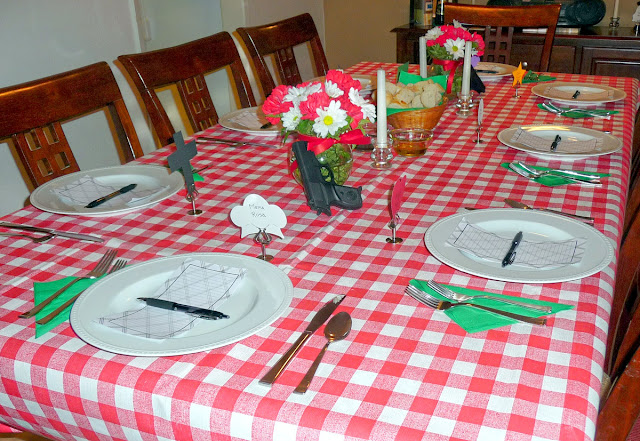 Decor:  I set my table with a red and white checkered tablecloth, green napkins, and my usual white plates. I set a few pieces of paper and a pen on each plate for guests to take notes during the evening.  The booklets included with the kit have a spot for note taking, but since I didn't know if I would be reusing the game, I didn't want to use those. 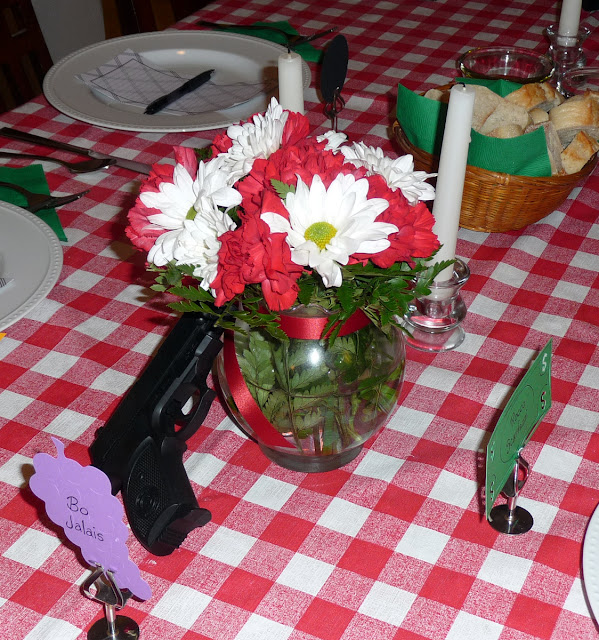 As my centerpiece, I bought white and red flowers from my local florist and tied a red ribbon around the vase.  Next to each vase, I placed a black toy pistol for added decor. Bread and Italian oils for dipping were also on the table along with white pillar candles. I downloaded some Italian opera to play in the background. 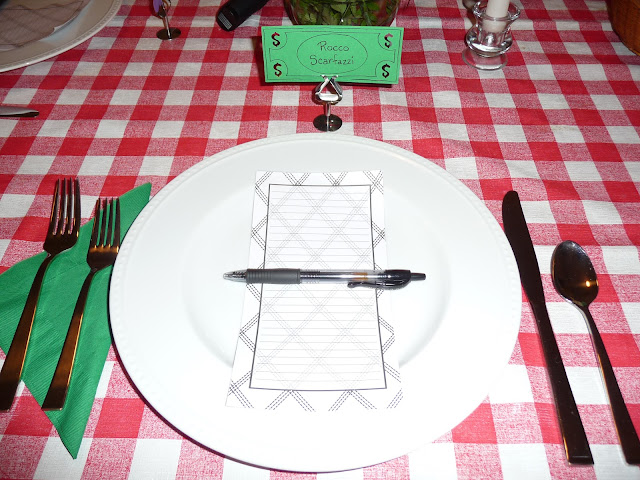 For the place card, I used my Cricut machine to scrapbook a card that went along with the character each guest was playing for the evening.  For example, Mama Rosa is a chef, so hers was a chef hat; Marco Roni is a soccer player, so his was a soccer ball.  My monthly dinner guests are all girls, but some of us played male roles for this evening.

Menu:  The mystery kit provides various dinner ideas and recipes.  I created my own menu of Italian food, but I did try two of the recipes from the kit. The two recipes I tried were the Baked Ziti and the Mocha Cake.  Due to copyright, I cannot include the recipes.  Anything Italian would go with this theme though.  You could even serve pepperoni pizza since the person murdered was Guiseppe (Pepi) Roni!! 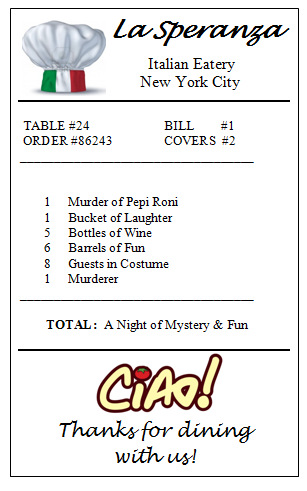 Favor:  At the end of the evening, I gave the guest who guessed the murderer correctly a large bottle of Italian red wine.  The other guests received miniature bottles of wine.  I created a "restaurant bill" as my tag to attach to each bottle of wine.


This was a super fun evening, and we all had a great time dressing up, playing our parts, and guessing the murderer.  This kit says the party takes 3-5 hours, and it did take about 3 hours for us.  I knew the girls could not stay super late, so we did move fairly quickly through the script in order to finish.  Note: This did mean our general conversations were lessened a bit to accommodate, but none of us seemed to mind this time because the evening was entertaining on its own.

If you are looking a different way to dine with friends, this might be fun for your group!

Posted by InviteandDelight at 3:42 PM

Email ThisBlogThis!Share to TwitterShare to FacebookShare to Pinterest
Labels: Dress Up Parties, For Laughs, Party Activities/Games