It is the month for Halloween festivities, and although I am not into the Horror movie genre, I decided to theme my dinner after this concept.  This October monthly dinner marks 6 total years of me hosting monthly dinners....that's 72 dinners I've hosted...each with a different theme.  I wanted to think of a theme that had something to do with the number 6, but all I could think of was 666.  I didn't want to do that theme exactly...hence, the Horror Movie Madness theme!  (The funniest thing about this theme is I HATE horror movies and honestly have seen very few...too scary for me!)  So, although it was an odd theme for me, I decided to roll with it. 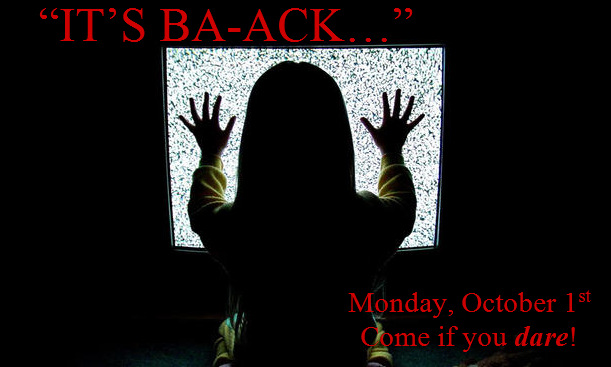 Invite:  I created two invites for this dinner and couldn't decide which I liked more.  The first was an adaptation of a quote taken from Poltergiest (who's main character's name is coincidentally Carole Ann like mine!). 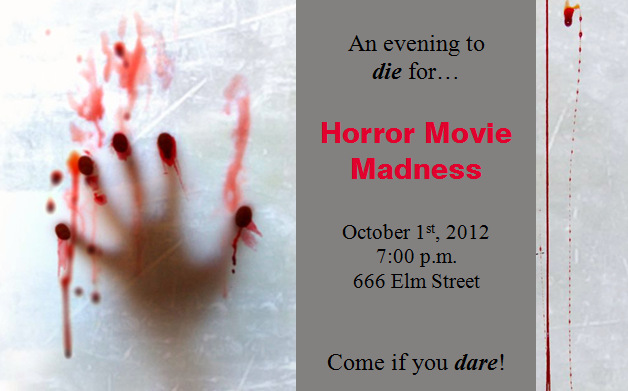 The second is a simple blood/hand print that seems to reflect almost any horror movie. 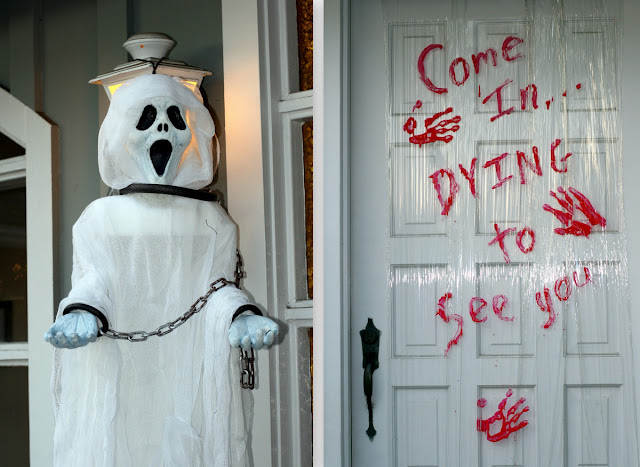 Entry:  Since I have two little kids, I don't have too many scary decorations.  However, I did purchase this Scream-inspired ghost to hang near the entry door. I also wanted to have a blood-splattered message.  To do this, I wrapped my front door in seran wrap and then used red washable paint to write the message/place hand prints. 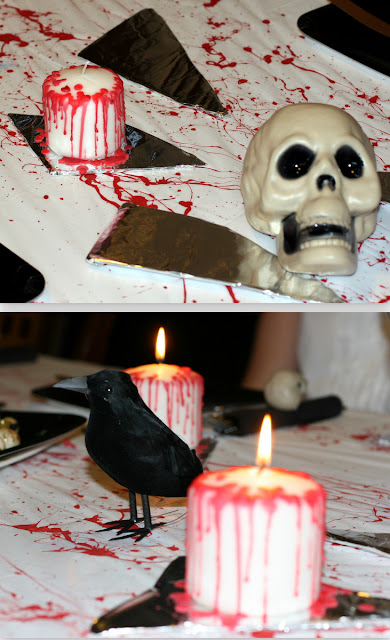 Decor:   I bought a white plastic tablecloth and then splattered red acrylic paint to appear like blood.  Along the center, I cut cardboard in triangle/random shapes and covered them in tinfoil to look like a broken mirror (I wasn't willing to take on the bad luck superstition of breaking a real mirror!).  I melted red candle wax onto plain white candles to also appear bloody. Lastly, I placed a black crow and a skull I bought at the dollar store on the table. 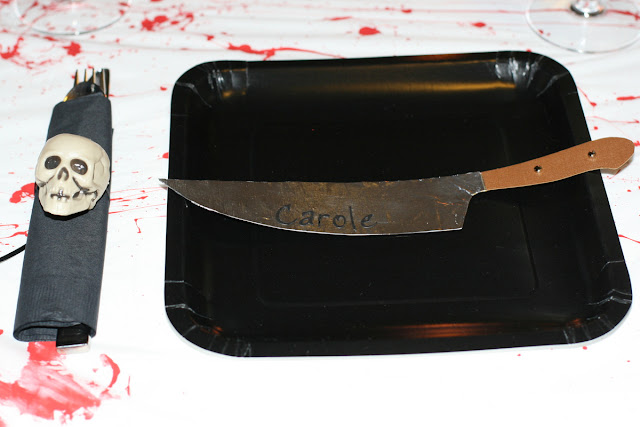 As a place card, I made knives and cleavers out of card stock and tinfoil.  I used the Cricut machine to add the guest's name to the blade.  A few brads were added to look like rivets on the knives.  I found mini skulls at Michaels (8 in the bag for $2) and used them as napkin rings.  They were plastic, and I just drilled a hole through them, added a black string, and tied them around the napkin. 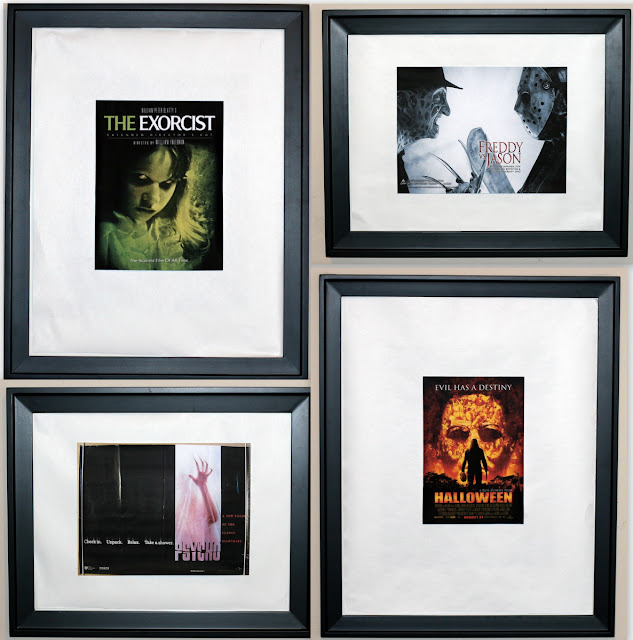 As added wall decor, I printed out horror movie posters to cover the photos of my family that normally hang behind my dining table.

I also borrowed a garland of bloody knives from a friend (purchased at Big Lots) and some skeletons from the Human Anatomy teacher at my work. On the bathroom mirror, I painted "I Know What You Did Last Summer." 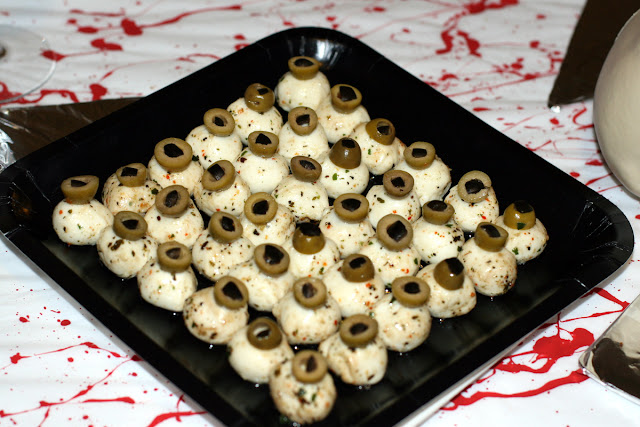 Menu: I started the evening with a plate of mozzarella eyeballs on the center of the table.  I bought the cheese already marinated in a sun-dried tomato marinade.  The pupil is just a sliced green and black olive. 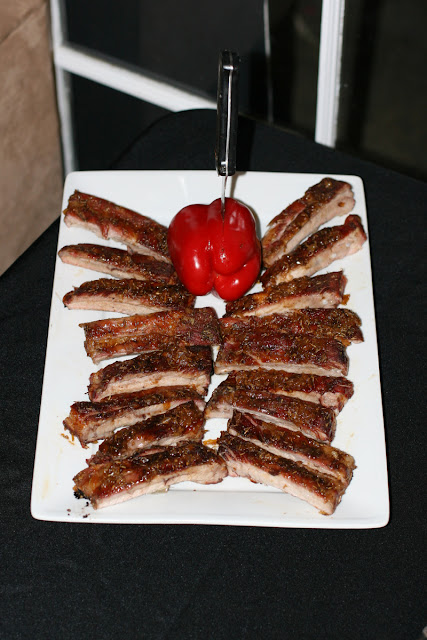 For the main dish, I served ribs and shaped them into a rib cage.  A red pepper served as the heart with a knife stabbed through it.  This was a new recipe for me, but I enjoyed it. 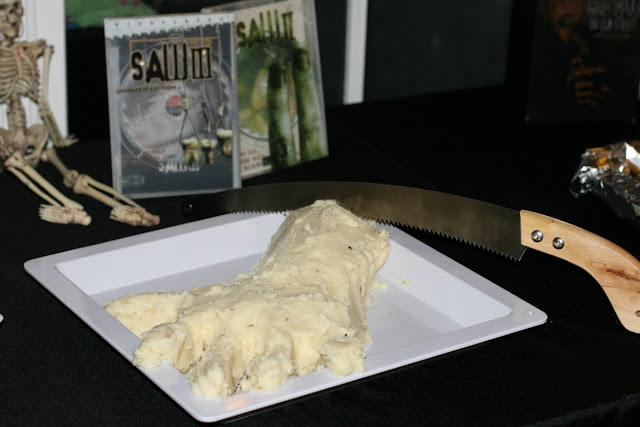 Instead of serving a blob of mashed potatoes, I decided to shape them on the serving platter into a severed hand.  I bought a saw at the dollar store to place at the severed point. Next to this dish, I placed copies of the Saw movies as a reference. 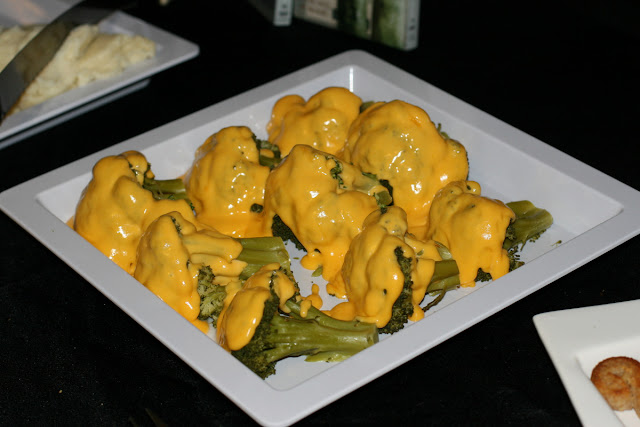 I originally planned to serve cauliflower which already looks like a brain, but since my mom always tells me I need color variety in my meals (she's a retired home economics teacher), I decided to serve broccoli instead.  I cut the broccoli into large sections with multiple florets and attempted to pipe on a homemade cheese sauce to make it look like a brain.  As you can tell from the photo, I was not successful in my attempt.  The broccoli melted the cheese too quickly for any pattern to stay.  Oh well...at least I got compliments on the taste! 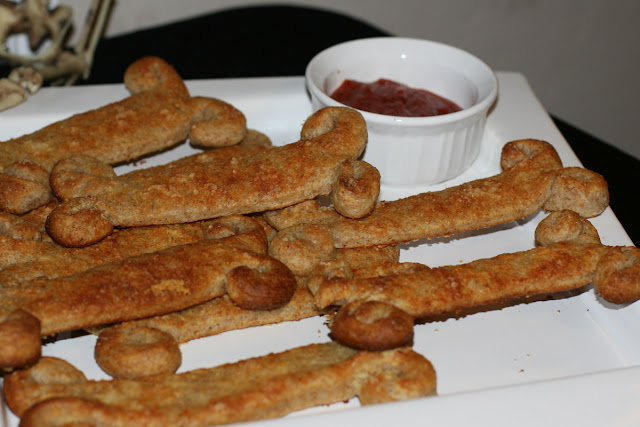 To finish off the main meal, I baked bread sticks shaped into bones.  I bought the prepackaged Pillsbury Artisan pizza crust.  I rolled it out and sliced it into slivers.  Then just sliced the ends and rolled them down.  Before baking, we added butter and Parmesan cheese to the tops. 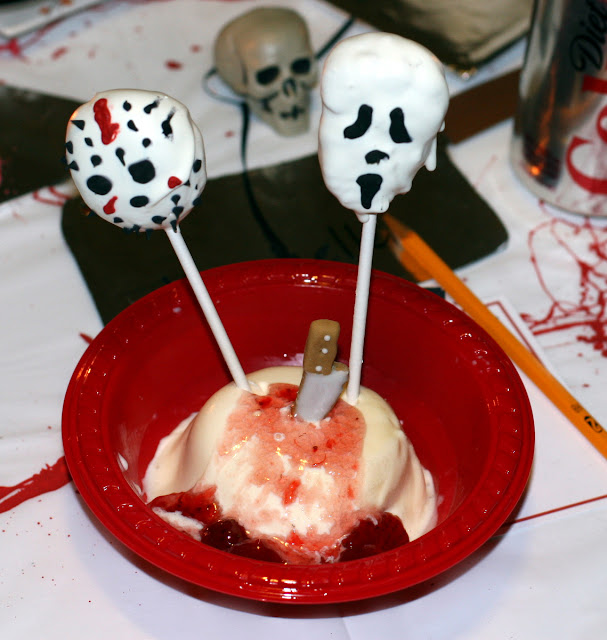 For dessert, I served vanilla ice cream with strawberry topping.  I bought Wilton's Icing Knives to put into each mound of ice cream to look like the knife caused the red topping to ooze out.  I also made Jason and Scream cake pops for each guest.  I shaped the cake pops into the mask shapes, then covered them with melted white chocolate.  The black and red is royal icing that I piped on. 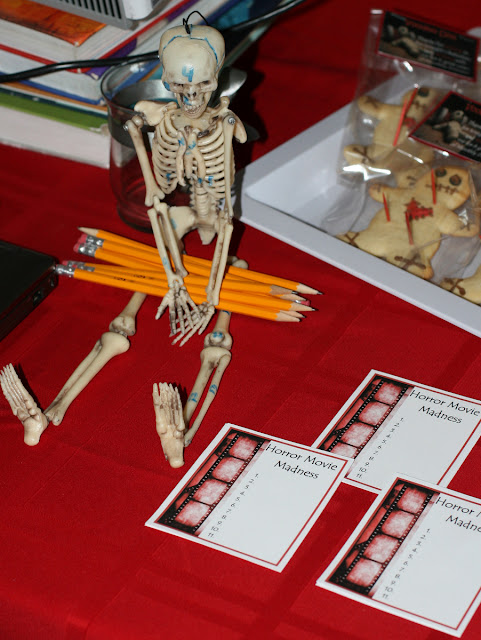 Activity:  I found movie clips on YouTube of various scary horror movies and burned them to a DVD. Guests tried to guess the movie by writing it on the game card I made.  This game did not work as well with this group of girls, so think about your guests beforehand. I didn't know mine were so chicken when it came to horror flicks...most wouldn't even look at the screen even though I didn't have any scenes with blood!  The girls were also fairly illiterate when it came to knowing horror movies, so they were not able to get many correct.

Favor:  My favor was Voodoo Doll cookies. I used a gingerbread man cookie cutter to make sugar cookies.  Then piped on the features using royal icing and added red toothpicks as needles.  In order to have the dolls fit in the bags, I did cut the toothpicks a bit. The tag I attached played up the words "poking" and "sticking"just for fun.


If you are looking for an interesting Halloween party or just a recipe to cook for October festivities, I hope you got some ideas. As usual, if you would like the template for the invite, horror movie game, or the Voodoo doll tag, just email me.

Posted by InviteandDelight at 9:52 PM

Email ThisBlogThis!Share to TwitterShare to FacebookShare to Pinterest
Labels: Dress Up Parties, Halloween, Menus with a Theme, Movie-Inspired Themes

Awesome Party! I blog over at http://www.2crafty4myskirt.blogspot.com/ and this Thursday I will be doing a round up of Halloween treats and party ideas. I plan to include this. Please let me know if you are not ok with that:)