Dancing with the Stars Soiree 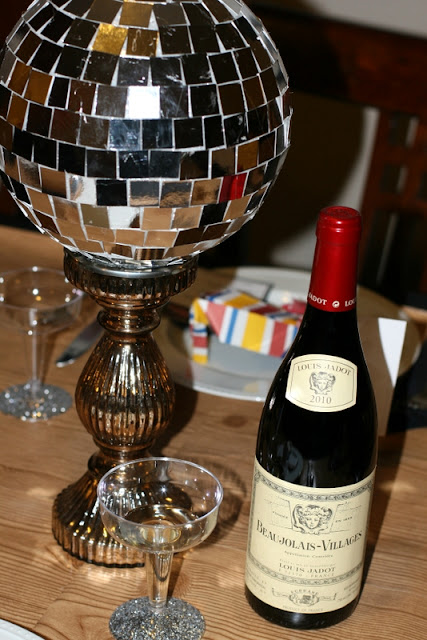 I watch very few television shows regularly, but Dancing with the Stars this past season was one I could not get enough of.  I just love dancing, and I really enjoyed the variety of routines and talent with this season's All Star cast. With this as inspiration, I decided to host my January monthly dinner as a Dancing with the Stars Soiree! 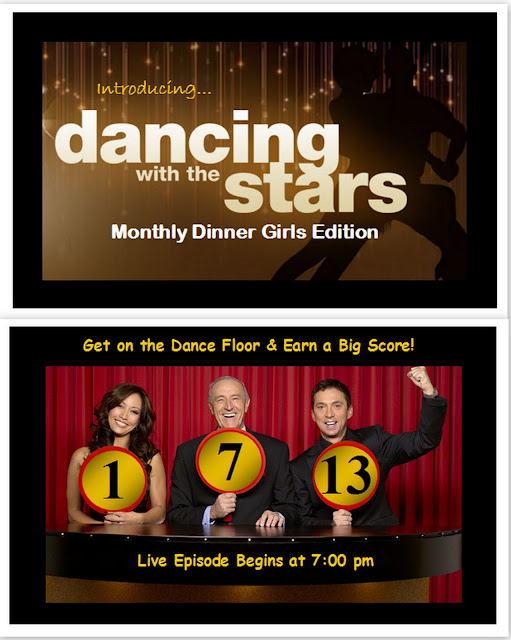 Invite:  The invite was simple.  I just used some images from the Internet to create a card with the "episode" details.  The inside of the card featured the three judges.  I changed their scores to reflect the date of my event for some added fun.  I also asked guests to come dressed to perform with a costume from any dance style.  This was fun as the girls came in country dance attire, a poodle skirt with 50s accessories, a salsa dancer, a flapper, and several other funny costumes. 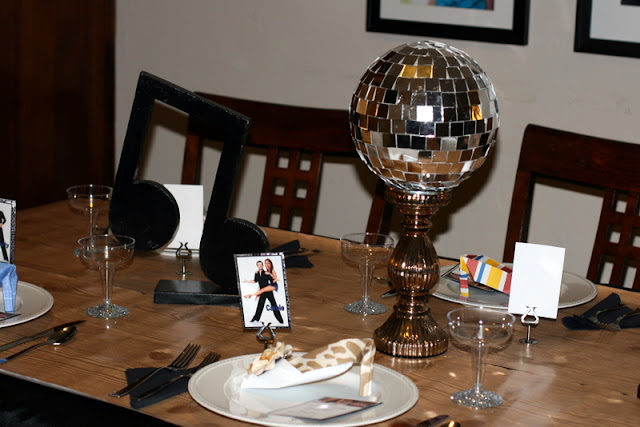 Decor:  I set my table to look like a large dance floor.  The "wood" dance floor is shelf paper I found at the Dollar Tree. As my centerpiece, I had two large wooden music notes with a mirror ball trophy in the center.  I made the mirror ball trophy with an 8" Styrofoam ball and a large piece of metallic poster board.  I cut the poster board in 3/4" squares and used a hot glue gun to adhere each individual square to the ball.  This took a while to do, but I love how it turned out.  The rest of the trophy is a candlestick that I bought at Michaels.  I just used hot glue to attach the mirror ball to the top of the candlestick.

As a place card, I found photos of the couples from the Dancing with the Stars All Star Season.  I replaced the female star's heads with one of my guest's heads.  I wanted this to be fairly obvious, so I purposely made my guest's heads larger than the star's head on the image.  Not quite as much as a bobble head, but the same idea. *I have these place cards with mirror ball background (without my guest's faces) already sized on my computer.  Email me if you would like them. 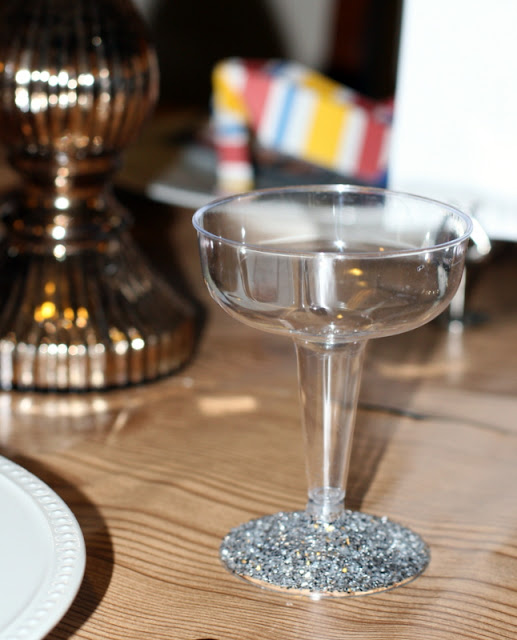 I used plastic champagne glasses at this dinner with silver glitter glued to the base. I didn't want to do this with my wine glasses, so this is why I used plastic.  It coincided well with this being the first dinner of the "new year" as well.  From the ceiling, I dangled metallic stars I made with the left over paper from the trophy.  My father-in-law has a lot of music and DJ equipment, so he let me borrow some lights that also added some color and glamor to the room. 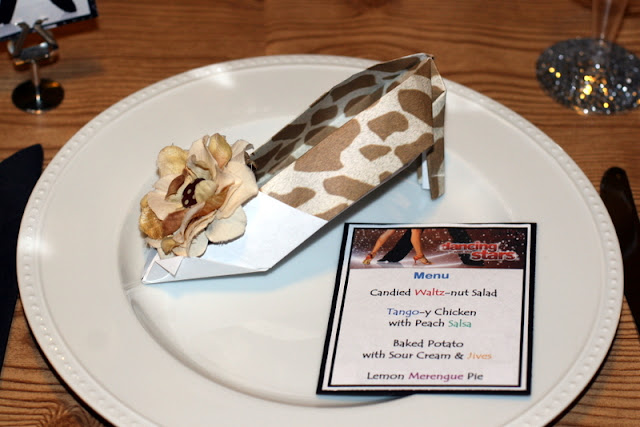 On each plate, I folded a 10x10 piece of scrapbook paper into a high heeled dancing shoe for added decor.  On the front of each heel, I clipped hair bows from my daughter and my friend's daughter. I tried to use double sided card stock on most of these for added impact, but the thicker the paper, the more difficult I found it was to fold.  So some of the shoes were double-sided and some were not.  I also included a menu card so guest's could see the "dances" reflected in my menu. 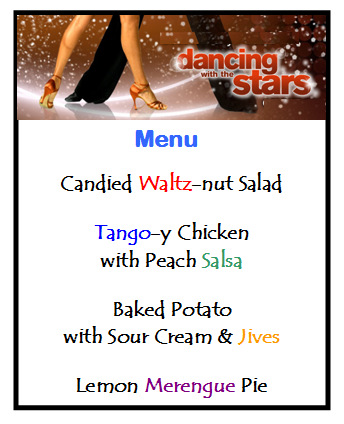 Menu:  To come up with my menu, I started to think of different dance styles/genres that are performed on Dancing with the Stars.  I then tried to incorporate these styles into foods. 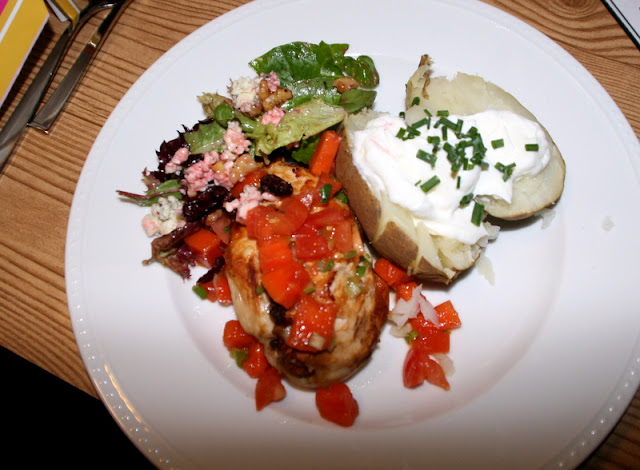 The Tangy Chicken with Peach Salsa is a delicious recipe and fairly easy to make.  Since fresh peaches were not in season, I substituted papaya instead.  Still yummy.

Rinse and pat dry chicken. In small bowl, combine 2 tablespoons lime juice and teriyaki sauce.  Brush mixture on chicken.  Cover and let stand 30 minutes or chill for up to 2 hours.  For salsa, in medium mixing bowl stir together peach or papaya, tomato, green onion, 1 tablespoon lime juice, ginger, and garlic.  Cover and let stand 30 minutes at room temperature or chill up to 2 hours.  Place chicken on unheated rack of broiler pan.  Broil 4-5 inches from the heat for 12-15 minutes or till no longer pink, turning once.  Top with salsa before serving. 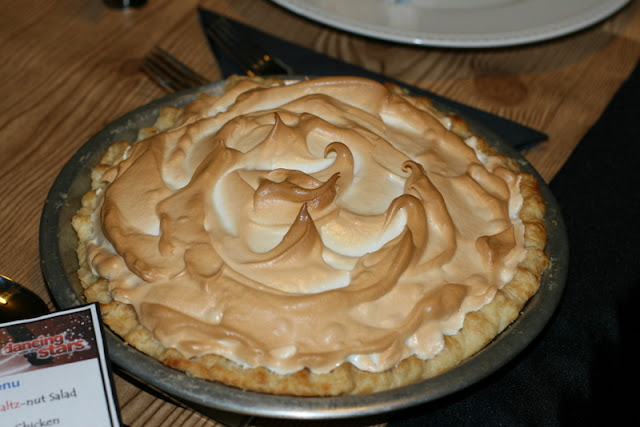 For dessert, I served a Lemon Meringue Pie. This recipe was adapted from Trisha Yearwood's recipe.

Preheat oven to 325 degrees.  In a medium bowl, mix the condensed milk, lemon juice, zest, and egg yolks, reserving the whites for the meringue.  Pour the mixture into your crust.  For the meringue, beat the egg whites and cream of tartar in a medium bowl with an electric mixer until soft peaks form, then add the sugar and whip until peaks are stiff.  Spread the meringue over the pie and seal to the edge of the crust.  Bake until the meringue browns slightly, 15 to 20 minutes.  Chill for at least 2 hours before serving. 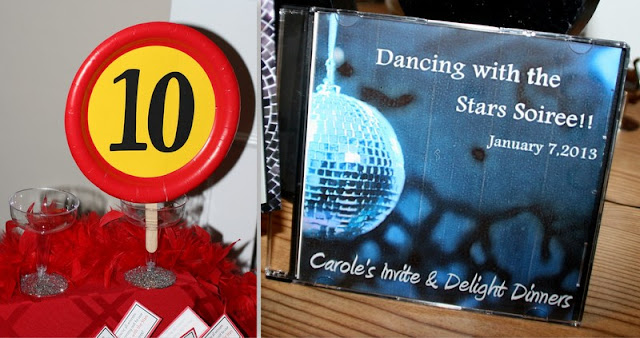 Activity:  You can't have a Dancing with the Stars party without a bit of dancing!  The original plan was to break up into pairs and give guest's 10-15 minutes to choreograph a dance in a specific genre.  My friend made a CD of songs for the guest's to choose from.  The dances we "assigned," thinking these would be the most fun and easy, were the tango, salsa, country western, and the jive. It was silly and fun to choreograph and then perform these dances for each other.  I made score signs for the judges using red paper plates, card stock, and Popsicle sticks. In addition to this activity, I also planned to have a bit of Wii dancing, but this didn't end up working out.  If you owe a Wii, this might be an alternative if you don't think your guests are up for choreography! 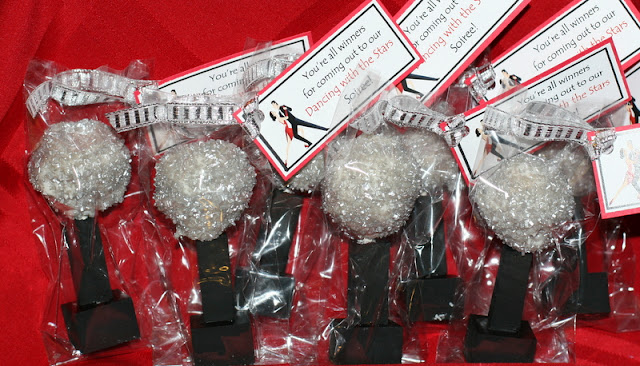 Favor: I decided to make a mini mirror ball trophy for each guest as a take home gift.  I cut pieces of wood to use as the base and post, glued them together, and painted them black.  The mirror ball is a cake pop covered in silver sprinkles.  I cut the cake pop stick so that it could fit in the hole I drilled in the wood.

If you like Dancing with the Stars, this is a fun party to host. A fun start to 2013!

Posted by InviteandDelight at 9:29 PM

My mother drools over Max! Could you please email me the place cards? I would love to do something with this for her birthday!

Hello!
I have had a good chuckle at several of your pictures and think your ideas are fun.
Here is my real reason for writing. How do you afford throwing lavish parties every month?
It looks like a lot of fun but how can you afford to do it all yourself? While nothing I have seen is really too pricey the food alone for say ten once a month, could really get expensive.
Is this a club that the participants pay dues or is there sort of a cover charge the night of? Seems like your guests are enjoying it but you are doing a lot of work and out a good deal of money on an annual basis to make that possible. Doesn't seem quite fair to you.

Hi. I love your ideas. Can u send me the blank cards? Do u have the invite saved too?? I'm going to take some of your ideas and combine them with my own. Too cute!

So people will probably collaborate having persons many people ordinarily would not engage in having as long as they believed far more in relation to exactly who we were looking at in addition to the style.
Cheap LOL IP