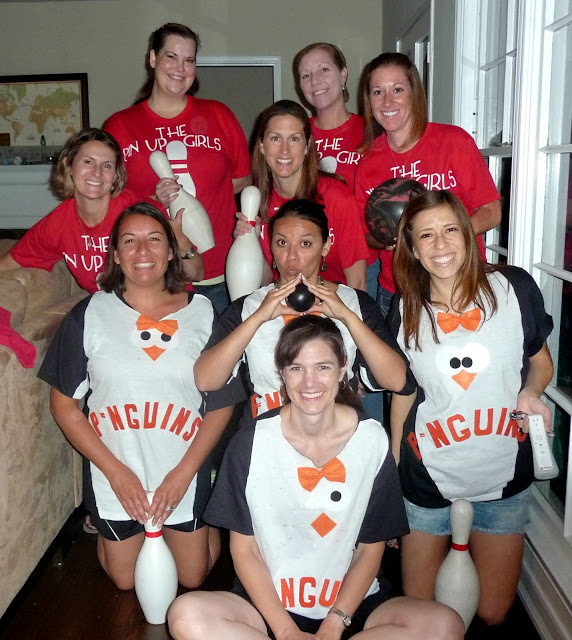 Back in July of 2011, I hosted a super fun monthly dinner titled Wii Love Bowling!  It was so much fun, and we had a blast competing as teams. I totally recommend a Wii party if you are looking for a fun activity that gets your guests active, but doesn't require a ton of props. 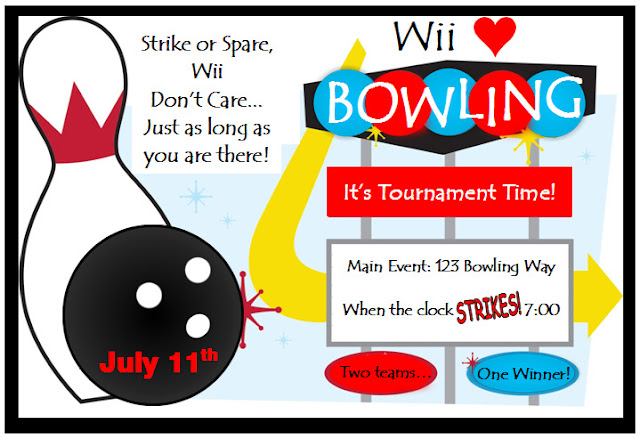 Invite: I found a cute birthday bowling invitation on Google images, and just adapted it to use for my dinner. I asked guests when they RSVP'd if they would be willing to be a team captain and design the shirt/come up with the team name for their team.  Once I had all the RSVPs, I randomly drew names to assign to each team and told the captains their team members. 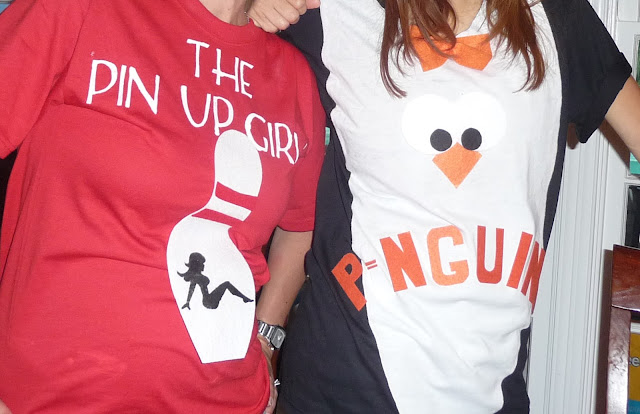 The team captains designed these super cute "uniforms" for their team, and it made the tournament so fun.  One team opted for "The Pin-Up Gals" and the other team was the "Pinguins."  We used the felt that has glue on one side to make these. 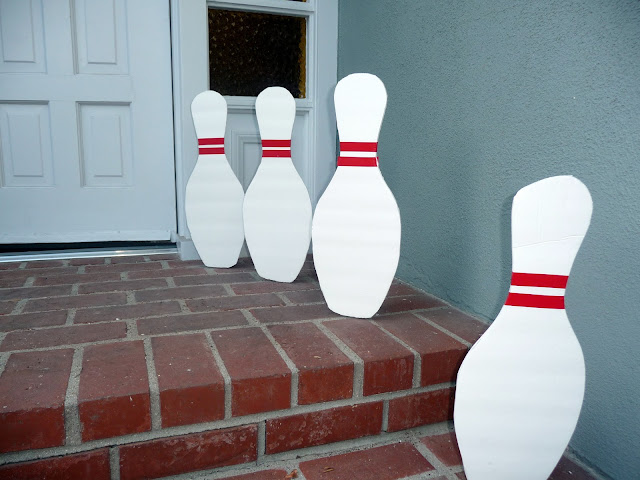 Entry:  I bought foam board from the local dollar store to make these giant bowling pins.  I drew the pins and then cut them out, used red scrapbook paper for the stripes, and taped them to cans of canned food to keep them upright. 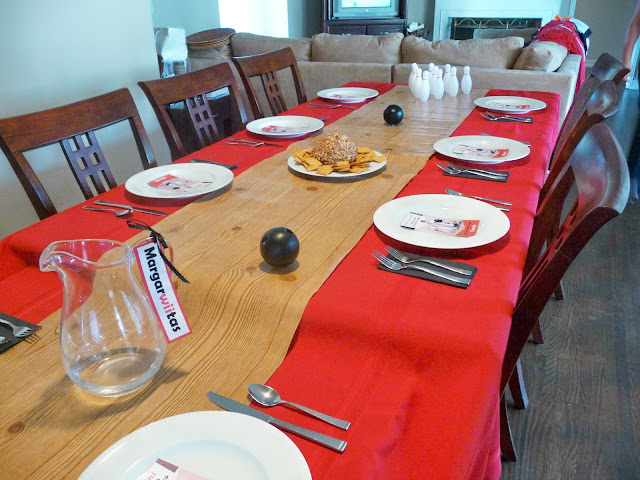 Decor:  I set my table with a bowling lane down the middle.  The lane is contact paper I bought for a dollar at the Dollar Tree (same paper I used for the Dancing with the Stars dance floor).  I added a few triangles with scrapbook paper to make it look even more like a true bowling lane.  The mini bowling set I got from ToysRUs in the $3 bin.  They were not heavy enough to stay in place on their own, so I taped the bottom with clear tape. 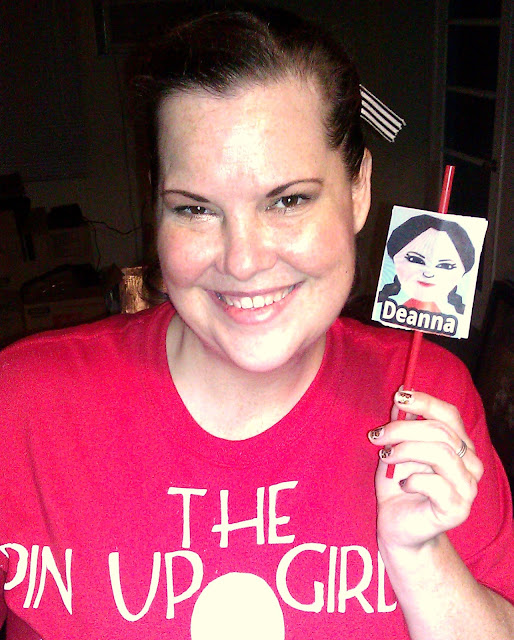 As a place card, one of the girls helped me out by making mini Wii people to look like each guest. She designed them on the Wii, took a photo with her phone, and then added the guest's name.  There are ways to do this online, but I was having difficulty doing this, and my friend was willing to help.  We attached the printed images to straws and added them to the table.  We put them on straws because I served "MargaWiitas" at this monthly dinner instead of the usual wine, so straws were needed. 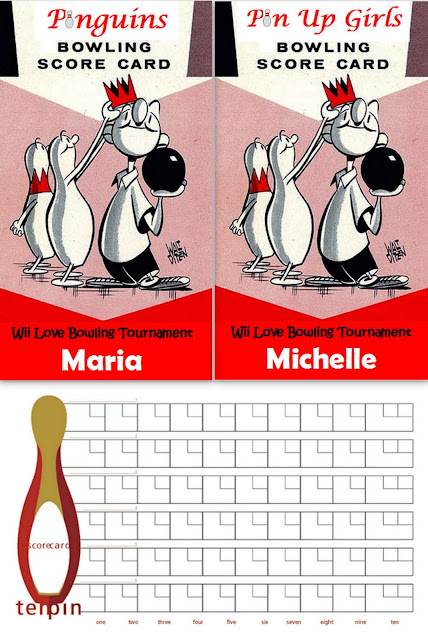 On each plate, I also put a score card for the evening.  The Wii kept score for us, so this was not necessary, but it was an easy addition I mainly added just for more decor.  The front was the photo and the back was the score boxes. 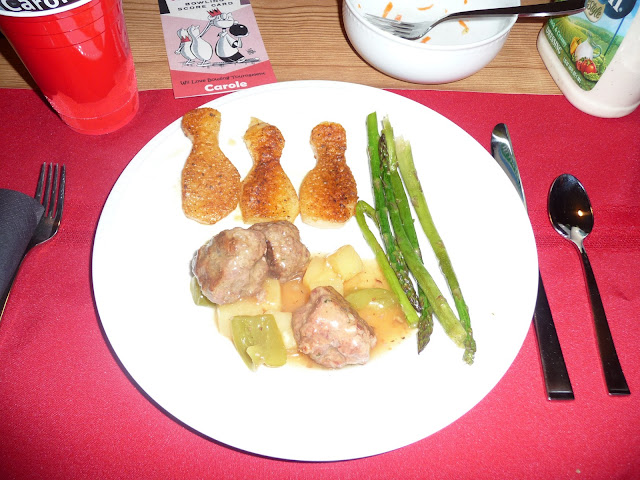 Menu:  For an appetizer, I made a cheese ball molded to look like a bowling ball.  I served this with wheat thins.  For the main meal, I served Teriyaki Bowling Meatballs,  potatoes shaped like bowling pins with yummy spices, and asparagus. 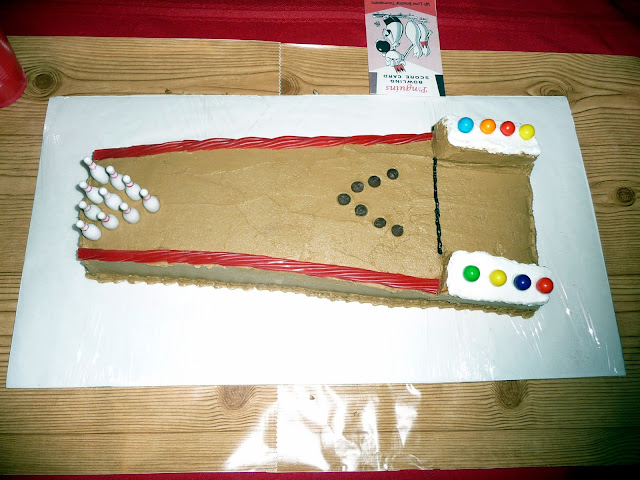 Dessert:  For dessert, I made this bowling lane cake.  I followed the recipe on Spoonful.com.  The only difference was I did not use black licorice for the black line because it was not available at my local grocery store.  I just piped it on with black frosting instead. My bowling pins are just plastic pins I found at a local cake shop. 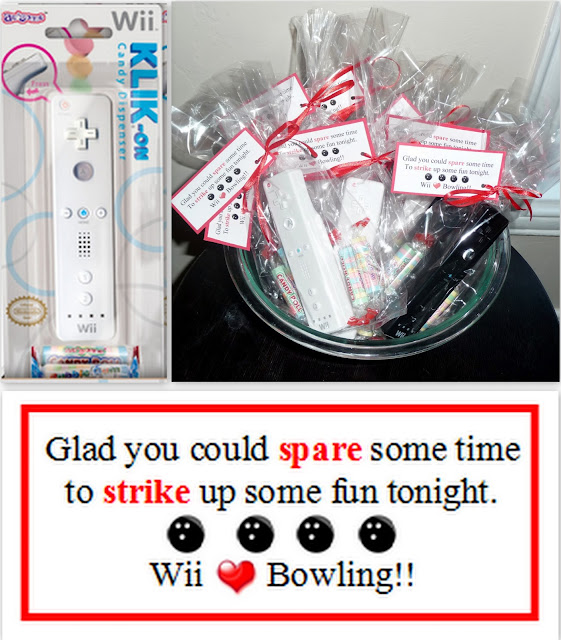 Favor: I normally try to keep my favors fairly inexpensive, but I couldn't resist purchasing these mini Wii remote Pez dispensers from Walgreens.  I think they were $1.50 or so a piece.  You can buy them in bulk on Amazon as well, but I didn't need that many and I was fairly last minute, so I got them locally.  I wrapped them up with a tag to play up the bowling theme. 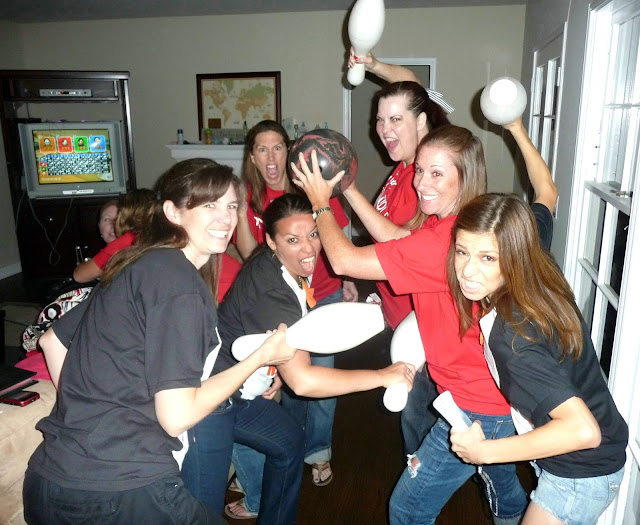 We had so much fun at this party.  The matching team shirts really helped keep the fun vibe going the entire night as well.  Another party I totally recommend throwing!

Posted by InviteandDelight at 1:29 PM

Looks like such a fun evening. Love the cake

I think Bowling Tournaments will be great
Website. Which carey spots news and information.

I think Bowling Tournaments will be great
Website. Which carey spots news and information.