A Knight of Medieval Madness 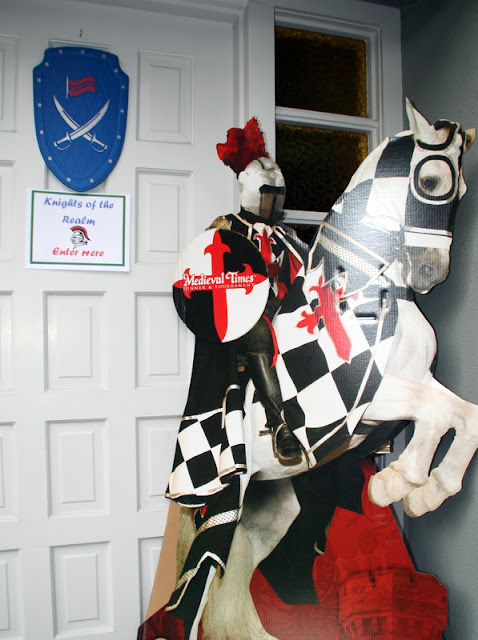 Entry:  Medieval Times gave me this huge knight and horse cardboard stand-up which I used to greet guests.  I also placed a shield my husband borrowed from his work with a sign telling my "knights" to enter. 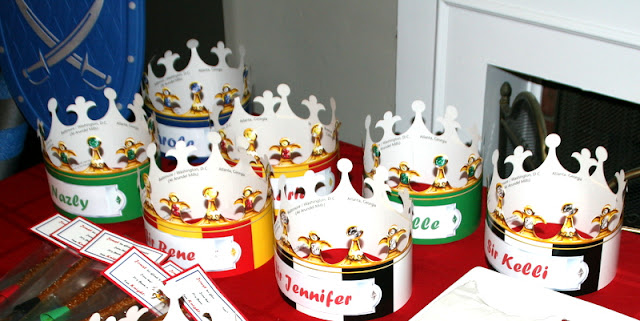 Decor:  I asked each of my guest's on the invitation to choose a colored knight to be for the evening.  They all came dressed in this color, and I incorporated these specific colors into the decor.  Of course we had Medieval Times crowns to wear and I altered the front to include my guest's names. 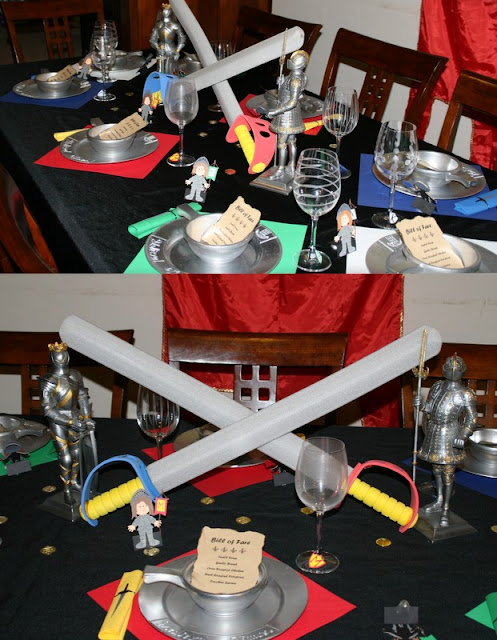 I set my table with a black tablecloth and used colored cardstock under each place setting corresponding with the guest's knight color.  The plates and bowls were borrowed from Medieval Times as well as the amazing knight centerpieces and the royal banners around the room.  The swords we already owned. 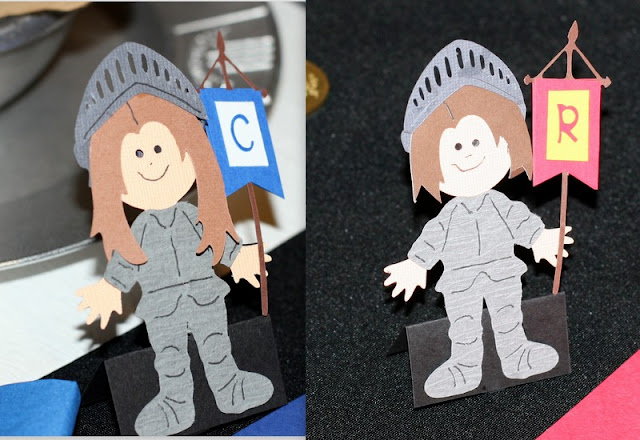 I used my Cricut machine to create individual knights as my place cards.  I tried to make the hair the same color/length of each guest.  The banner each knight is holding represented the color knight the guest was for the evening and her first initial. 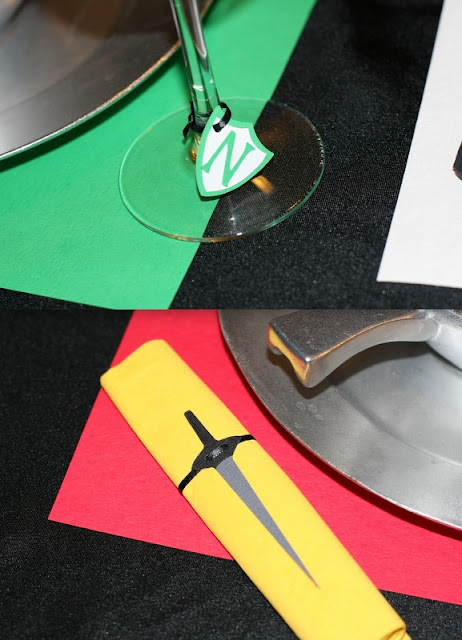 I also used my Cricut to create shield wine charms in the colors/initial of the guest.  The swords for the napkin holder were also made with this machine. 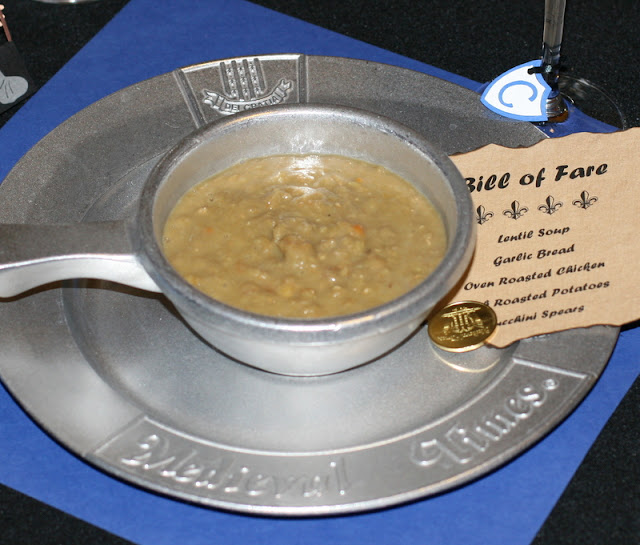 Menu:  I wanted my menu to be similar to what Medieval Times serves, so I molded it after their menu.  I think that their food is delicious, so why change it!!  As a starter, I served a Lentil Soup.  This was a really good soup and super healthy.  It was difficult to eat without a soup spoon though (I was trying to stay authentic medieval).  I would recommend a soup that is more liquid based if you are not going to give your guest's silverware. 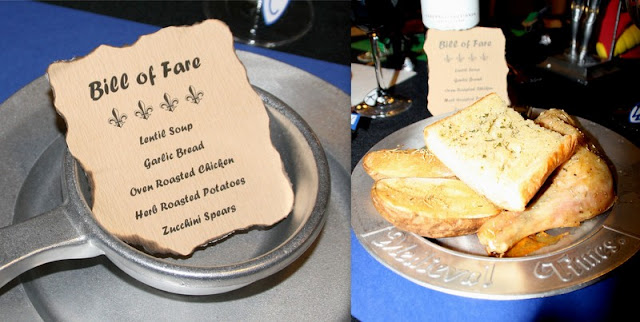 As the entree, I baked chicken quarters, potato wedges, and garlic bread. I didn't have any more oven space, so I grilled the asparagus spears on the outside grill. I made the menus on card stock and just burned the edges. 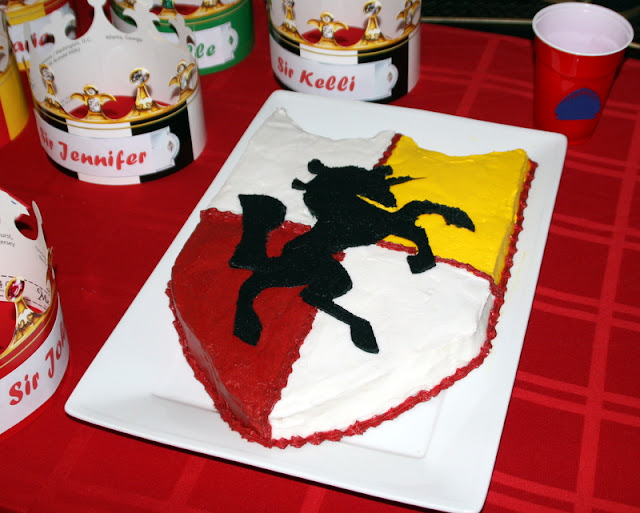 For dessert, I made a shield cake. I baked a 10x15 cake and then cut it to look like a shield. I made a stencil with wax paper to put the horse on. (Thanks Mom for helping with the frosting on this cake!).

Activity/Games:  Since this was a Medieval Knight's Tournament, there had to be some games!  The first was a Minute to Win It Game, that I altered to be called "Slay the Dragon".  The "Knight" had to unravel two rolls of streamers using only their arms.  The "knight" that did it the fastest scored points for her team. I used my fireplace mantle to have the 4 banners of the games we were playing displayed. 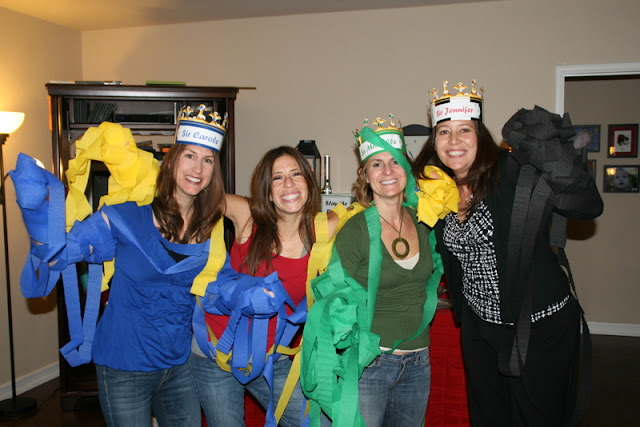 As you can tell, we had a lot of fun with this one. 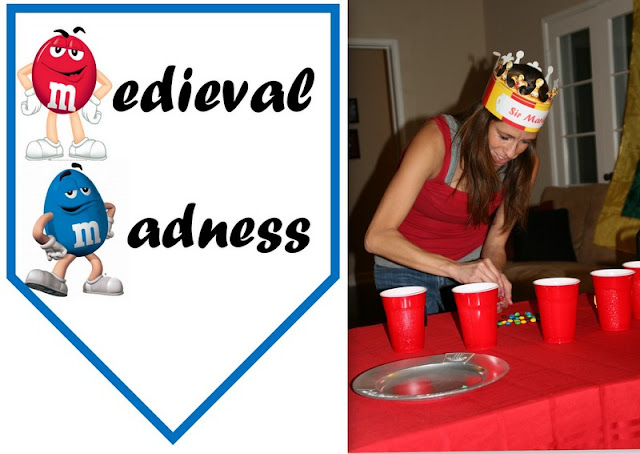 The second game I titled "Medieval Madness".  In this Minute to Win It game, the "knight" has to get 50 M&Ms into the correct cup designated for each color.  There are 5 colors and 10 M&Ms in each color.  In the original game, they can only use one hand, and they must go in a specific color order.  We didn't follow these rules and just timed which "Knight" did it the fastest.

The third and fourth game I had planned the girls and I did not get to play as our evening ran late. I think they would have been really fun though.  The third game was "The Joust".  I bought pool noodles and used duct tape to make them look like lances. I added tissue paper to the end as well. In this game, the guests were going to be pushed on scooter boards across my hardwood floor and attempt to get the "lance" through as many rings as they could as they slid by.  The rings were plastic diving rings from our pool hanging on a piece of thin rope.  Probably would have been pretty funny had we had the chance to play it. 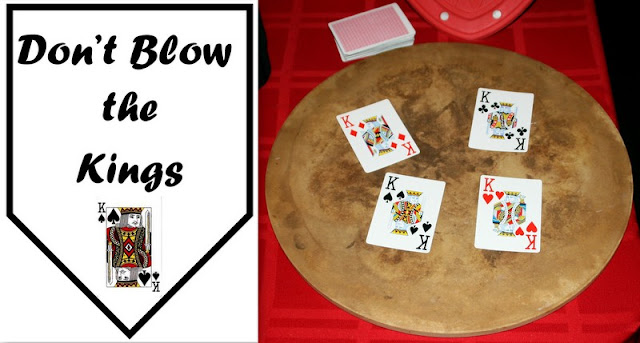 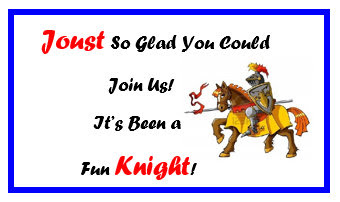 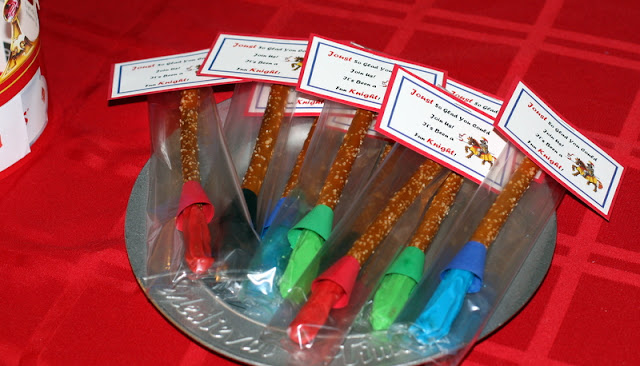 Favor:  As I favor, I made pretzel "lances" in each guest's color. I tried to play up some medieval words in my tag for an added laugh!  The "lances" are melted chocolate on one end and then card stock as the cone. 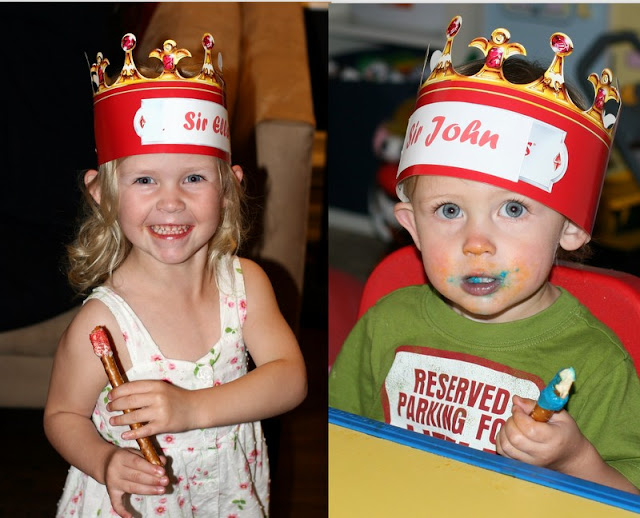 All and all this was a fun party. As you can see...even my kids loved it!! I want to thank Medieval Times for letting me borrow the decor to really make this party come to life. If you haven't been to a Medieval Times and seen the show, you really should check it out.  I can't wait to take my two little munchkins in the future!  They loved this party, so I know they would love to watch the real horses compete rather than us girls horsing around!!

Posted by InviteandDelight at 9:24 PM