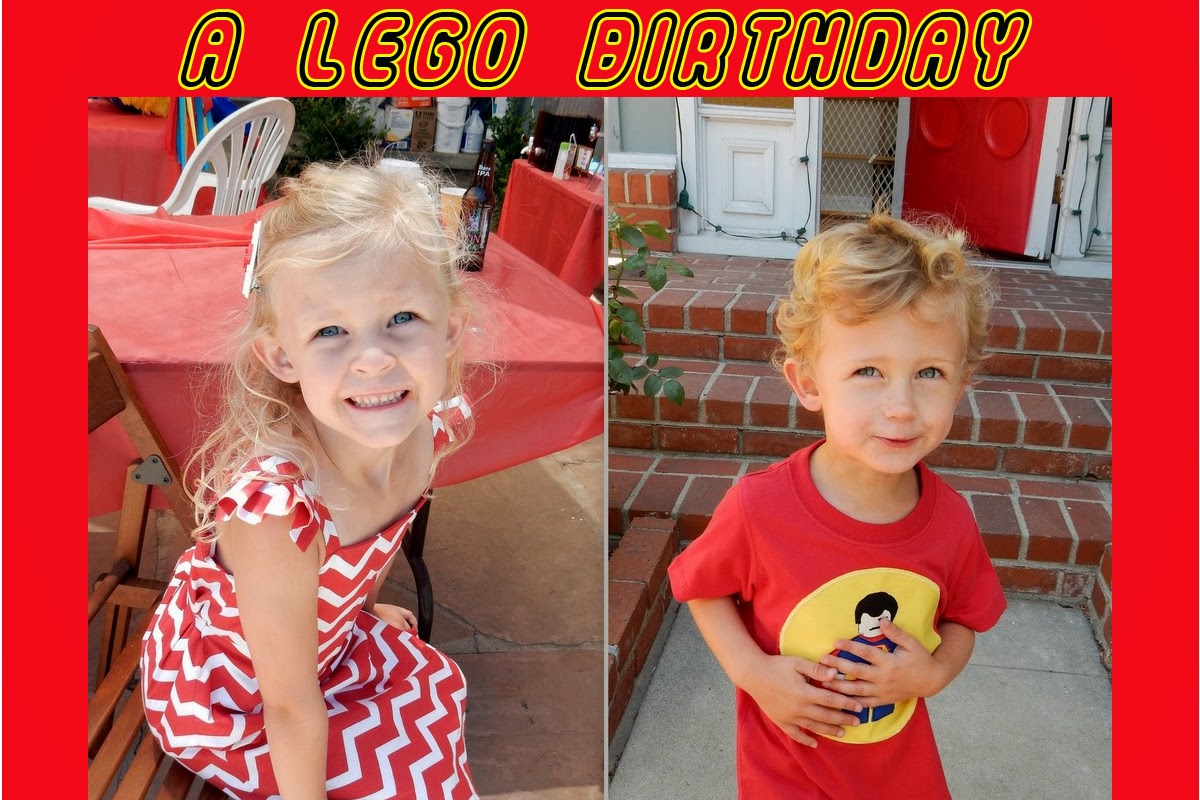 Just realized I forgot to post the details of my two kiddos birthday party last month.  They are both really into building things with Legos, so we decided this would be the theme of their joint birthday party. 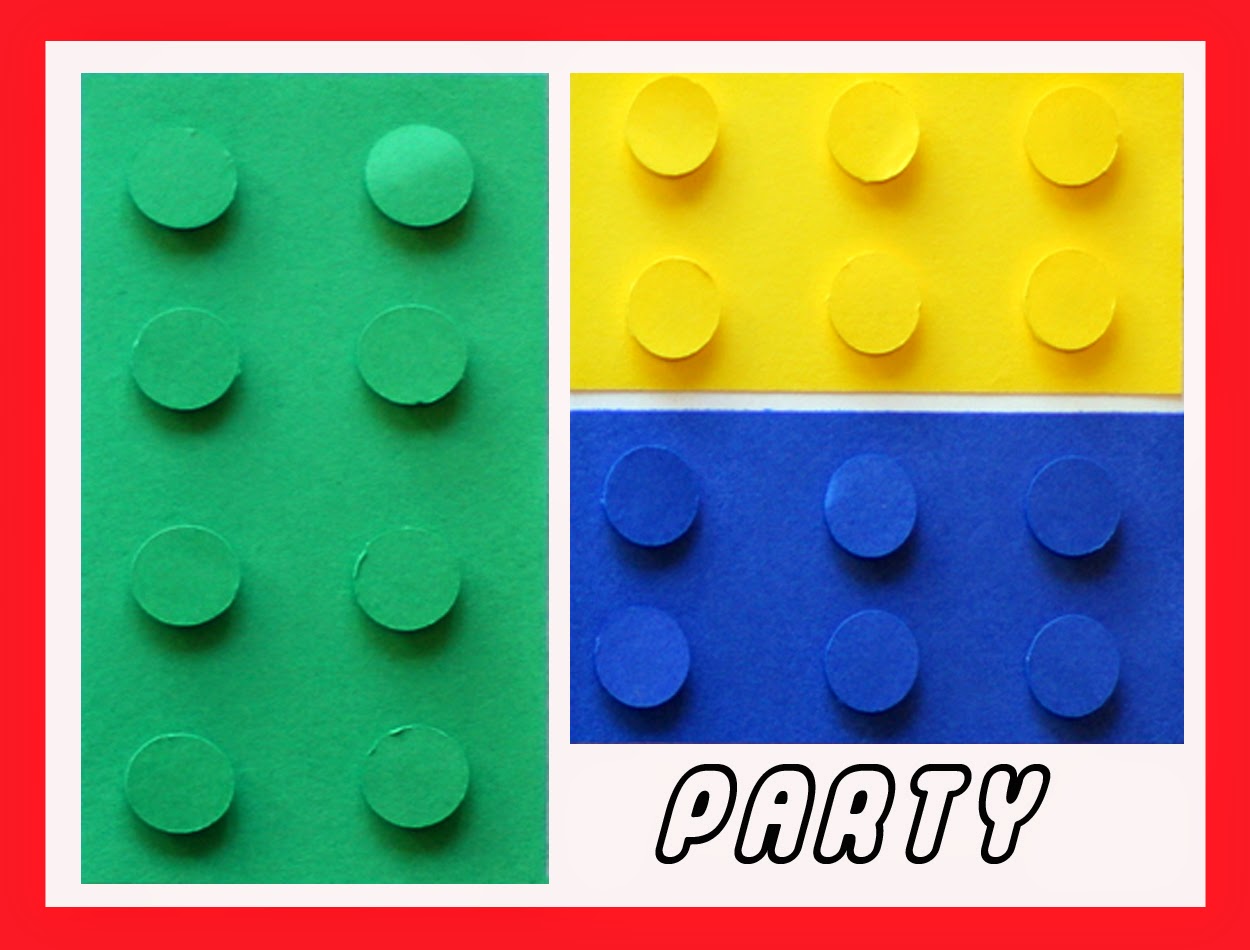 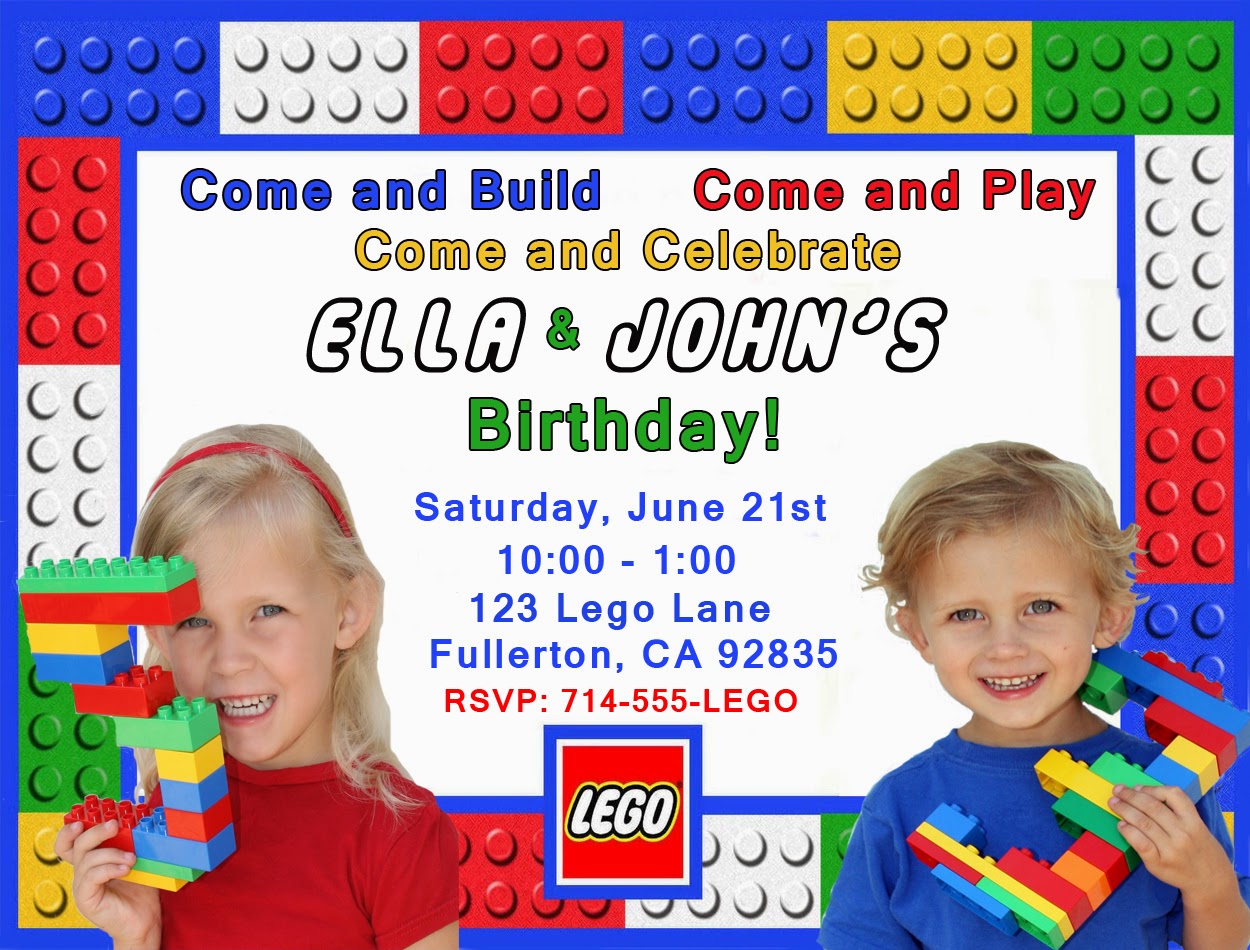 Invite:  I designed the border and text of the front of the invite on Photoshop.  I then used scrapbook paper, circles cut from my Cricut, and foam tabs to create the green, yellow, and blue Legos on the front of the invitation with the 3D look.  This took quite a bit of time to do, but I do love how they came out.  For the back side of the invite, the kiddos and I  built the number 3 and 5 out of Lego Duplos and then had a mini photo shoot in the front yard.  I took these photos and added them to the invitation I designed using Photoshop. I downloaded the free Lego font to do the main text. 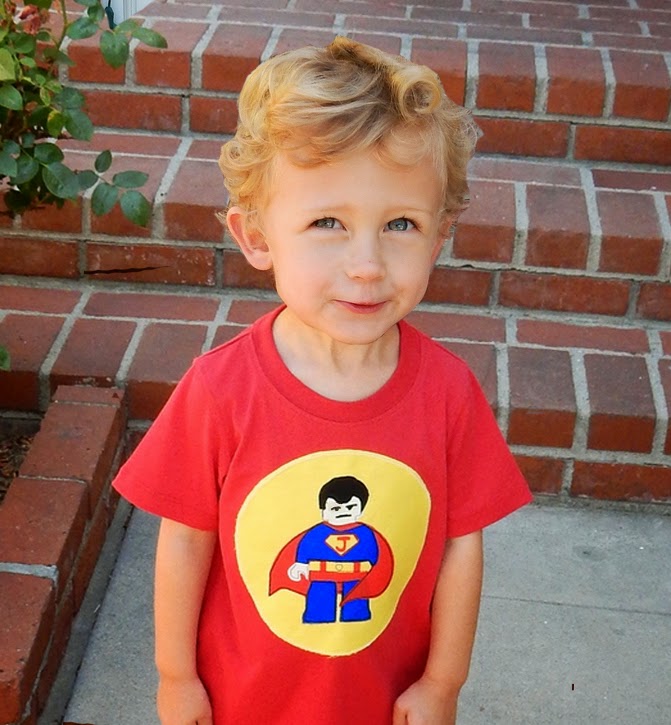 Attire:  I made this Superman Lego shirt with the help of one of my friends.  We bought a plain red shirt, and  we cut out the fabric pieces and ironed them on the shirt.   My friend sewed them along the edges to help them stay.  My son's superman did lose an eye during the party, and it didn't really hold up after the washing machine, but it sure was cute! 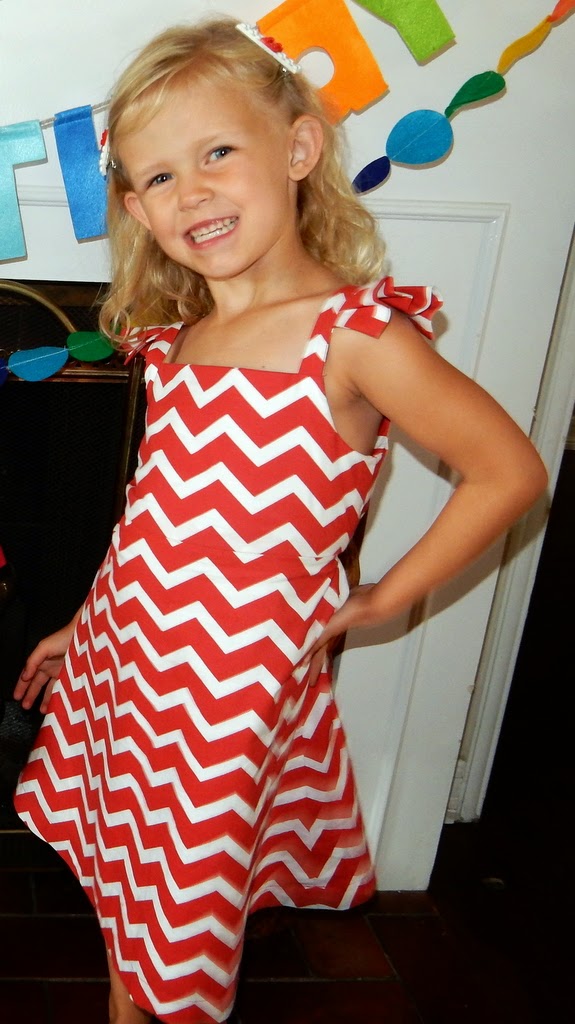 My mom made my daughter's super cute dress.  I made the Lego hair clips to add to the outfit.  To make these, I just bought plain silver hair clips and then used hot glue to adhere the white Lego (with the smaller red one on top) to the clip.  They were really cute! 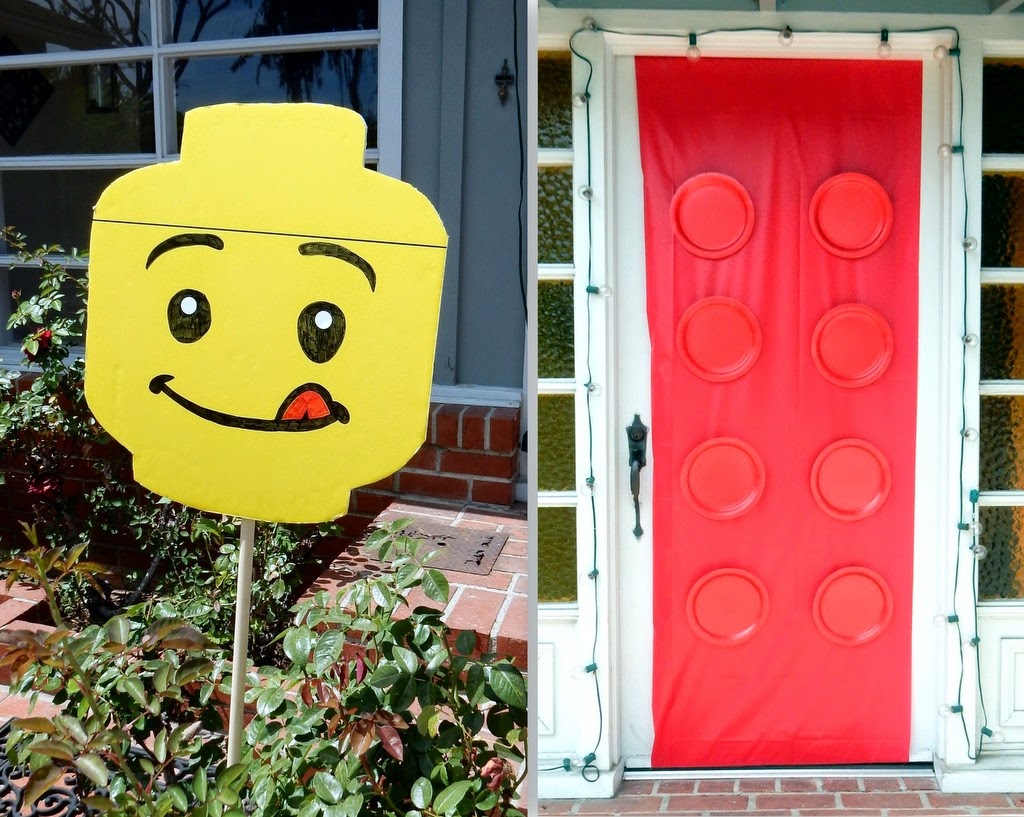 Entry Decor:  I made a giant Lego on my front door using a red plastic tablecloth and red paper plates.  It was super easy to do.  Just used duct tape to make the plates stay (and they did).  The Lego head I made using yellow foam board.  I drew the face and then cut it out and used red and black Sharpie markers to make the face. 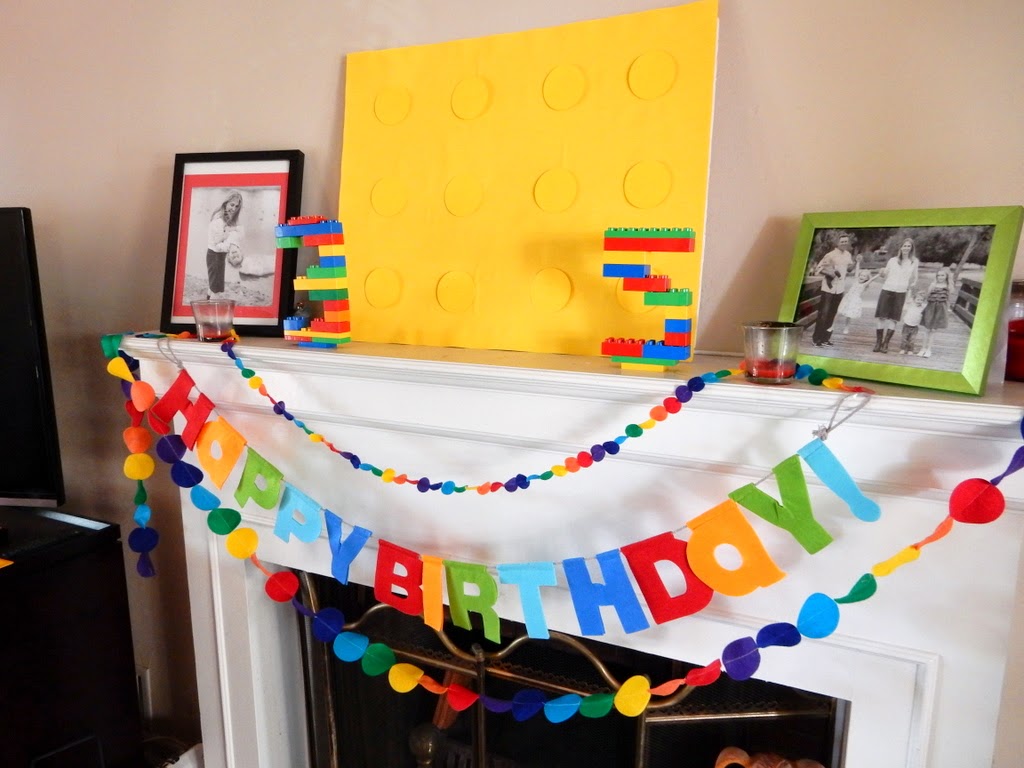 Inside Decor:  On the fireplace mantle, I used some brightly colored garlands.  One of my friends made these out of felt for her daughter's rainbow-themed birthday party, so I was lucky enough to just borrow them.  The giant yellow Lego I made using poster board, card stock circles I cut out, and the foam tabs to make the Lego 3D. I made several of these giant Legos in various colors to spread throughout the party. 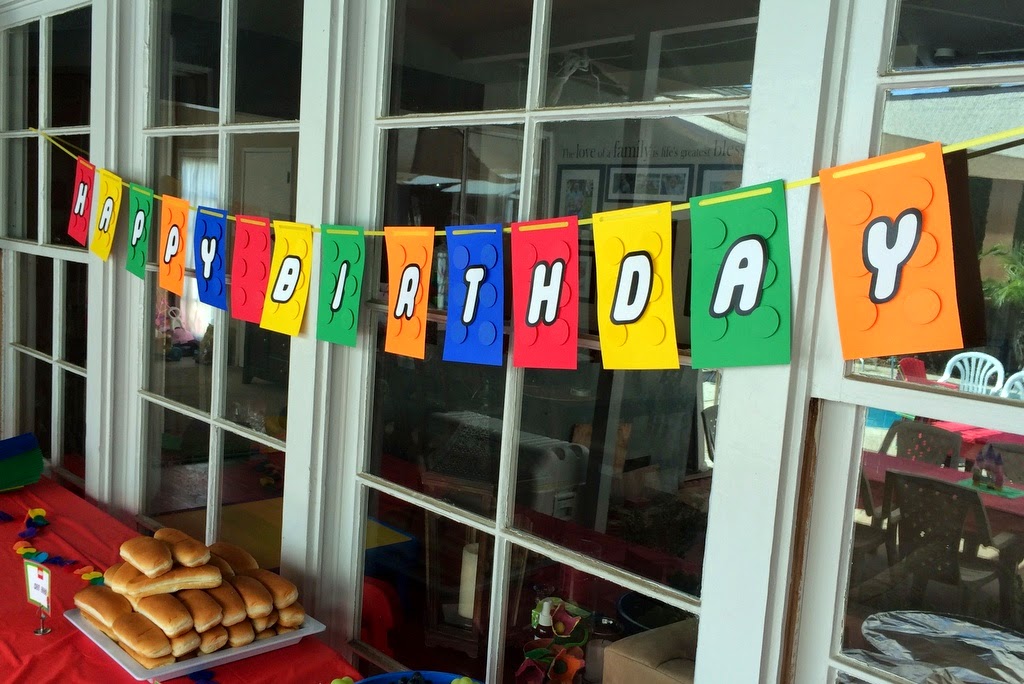 I also made this Lego banner. 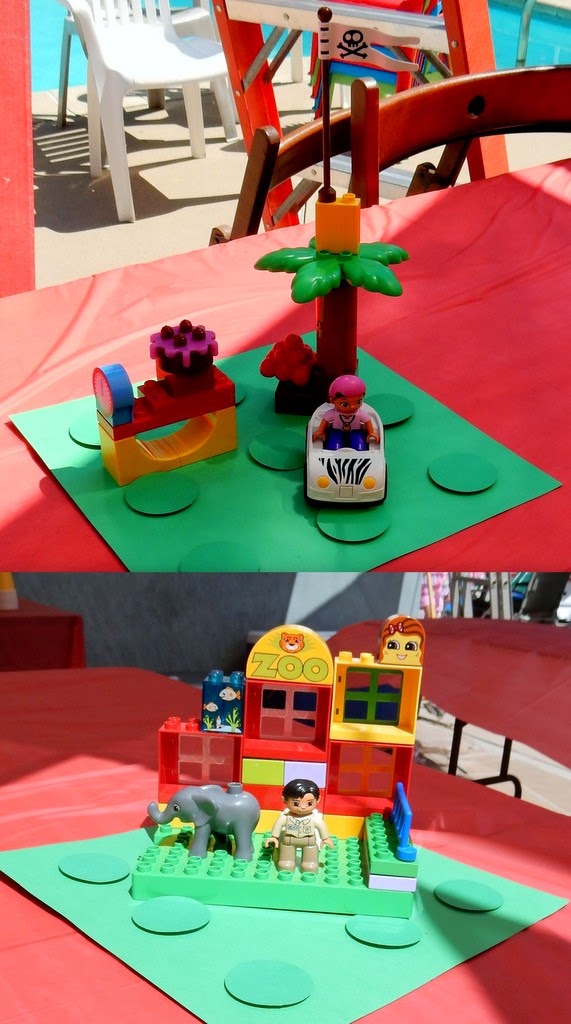 For the centerpieces, my daughter made Lego Duplo creations. She had a lot of fun with this.  I set each creation on a 12x12 piece of scrapbook paper that I made to look like a Lego/Lego base. 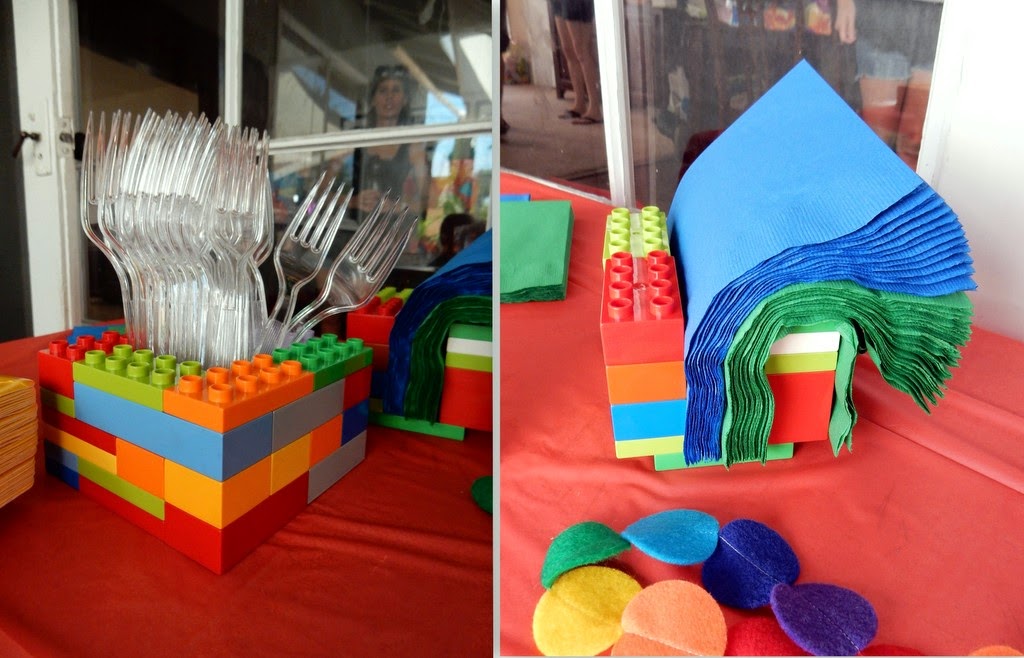 I also built a utensil and napkin holder out of Legos. 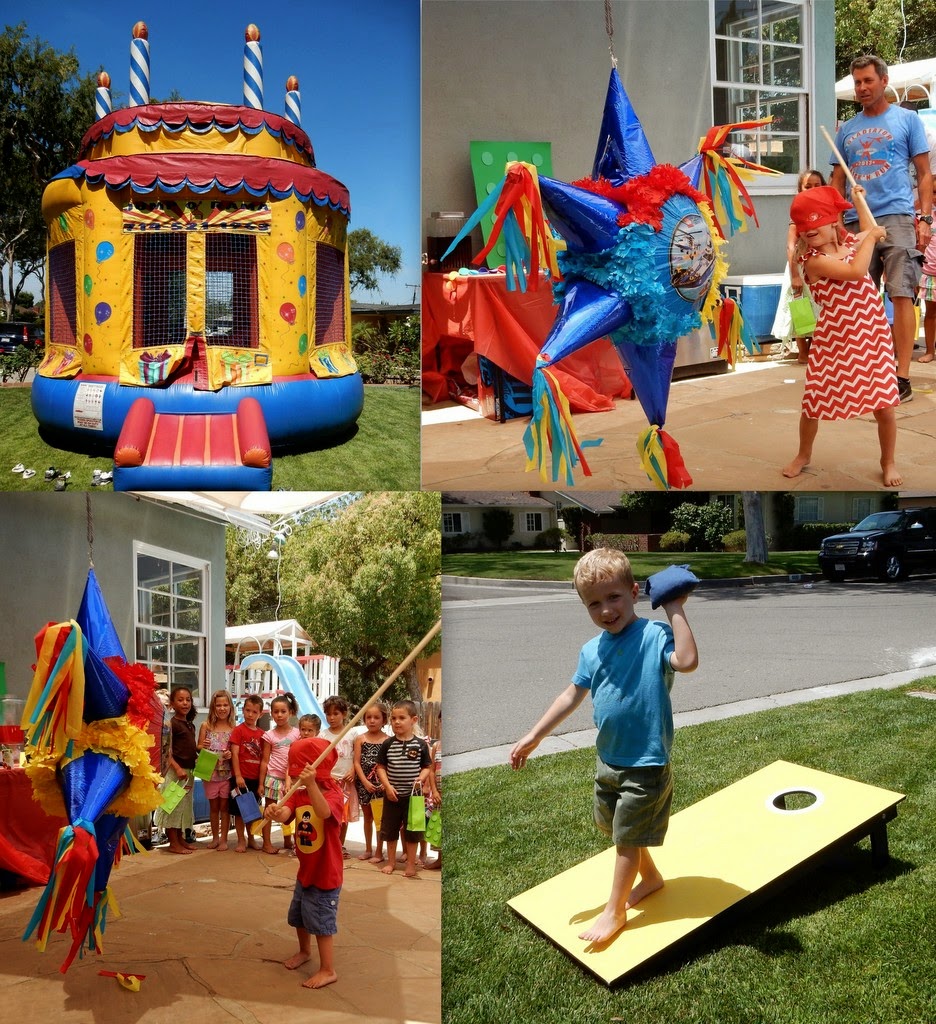 Party Games: We ordered this super cute cake bouncer and borrowed the corn hole game from a friend. My original plan was to make the bean bags look like Legos by stitching felt circles to the top, but I ran out of time.  We also had a Lego pinata. 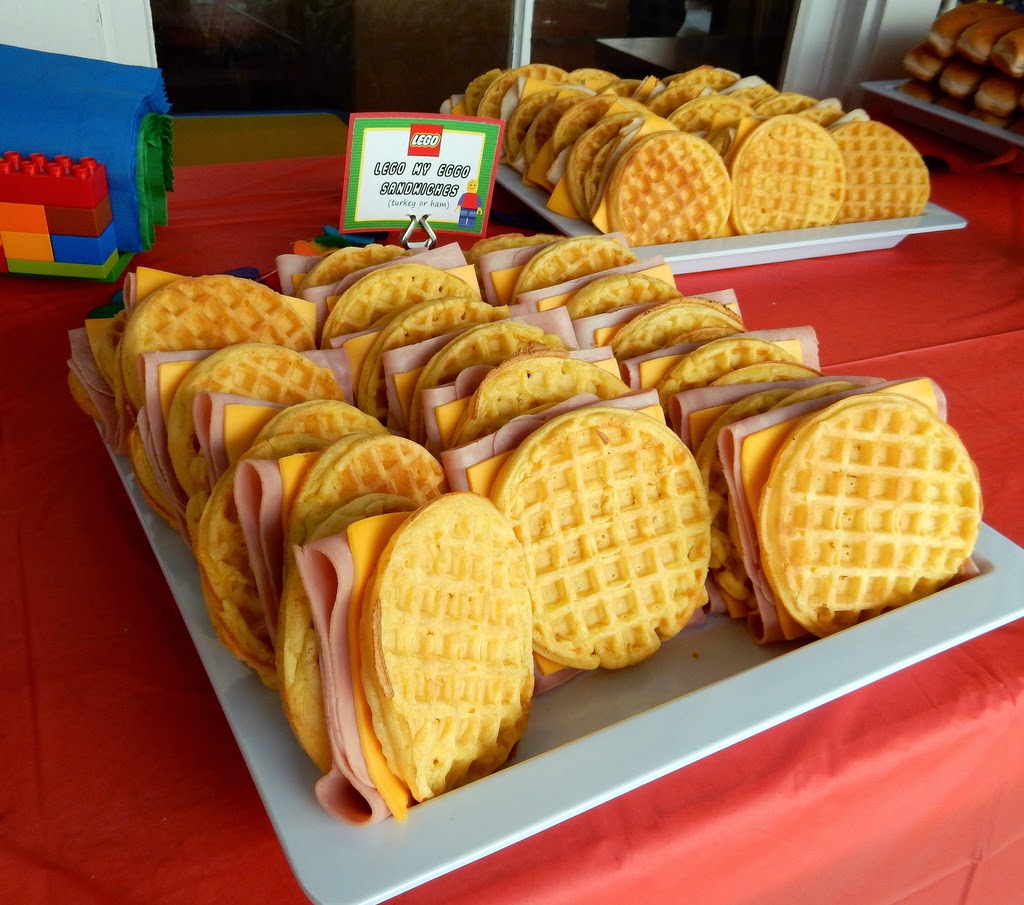 Menu:  I wanted to stay simple on the menu, but I also wanted to at least have some items that related to the them.  I decided first on Lego My Eggo turkey and ham sandwiches.  These were good, except that the waffles were not as crisp as I had hoped once people started eating.  My advice is toast them right before you are going to serve them.  This way they stay warm and don't have a chance to get soggy.

For the kids, we also had hot dogs - the cheap and simple staple of birthday parties!  My original thought was go have square shaped pizza with pepperoni because it can look like Legos, but we went with Plan B to save time and money. 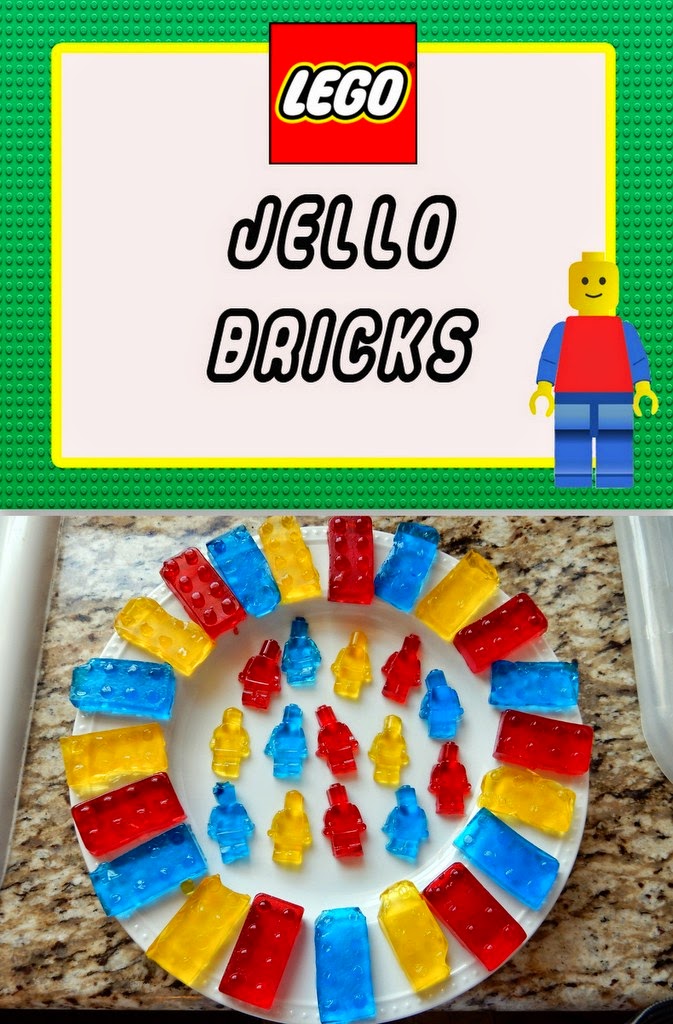 I made these jello Legos with a silicon mold set I bought off the Amazon (also used on favors).  As you can tell in the photo, these were VERY hard to use for this particular project. The little men came out fine, but the Legos didn't work. The knobs on the Legos stuck to the mold, and it just did not work well. I ended up using the same mold I used on the candy cake pieces (discussed below), which worked better, but not great.

We also had fruit salad, chips, and veggies to round out the meal. 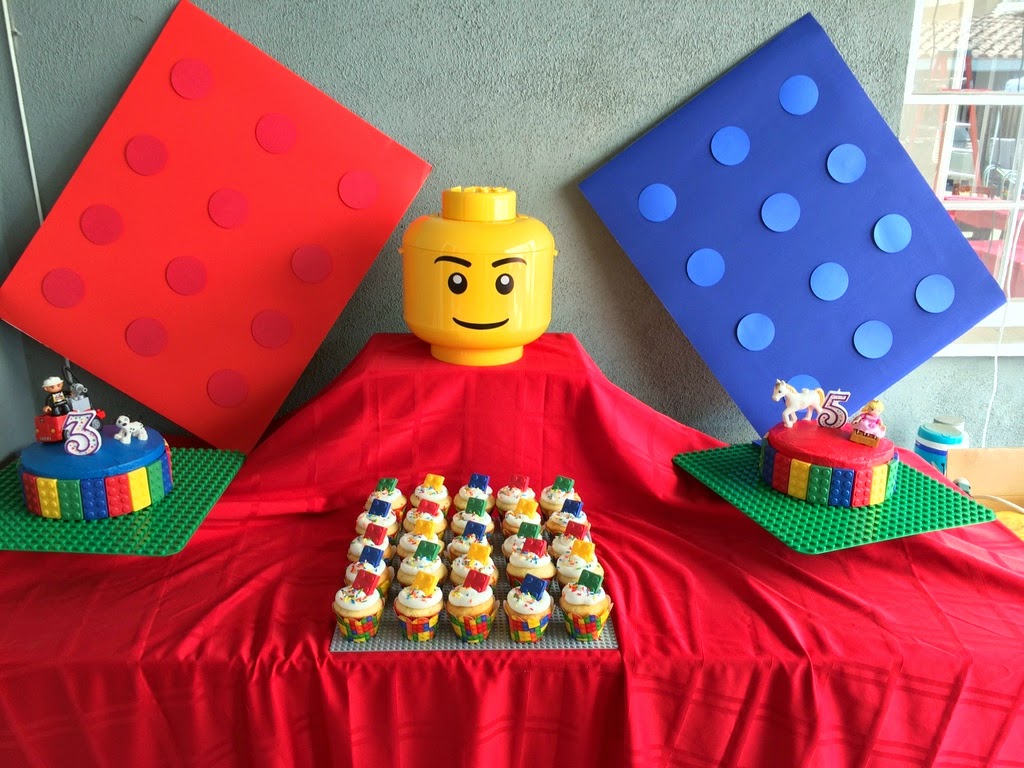 I had a lot of fun making the cake and cupcakes, and I love how the cake table turned out.  I used the giant poster board Legos I made as backdrop.  I also bought a Lego storage head from Target to add to the decor.  All the desserts were served on Lego mats that my kids build their Legos on all the time. 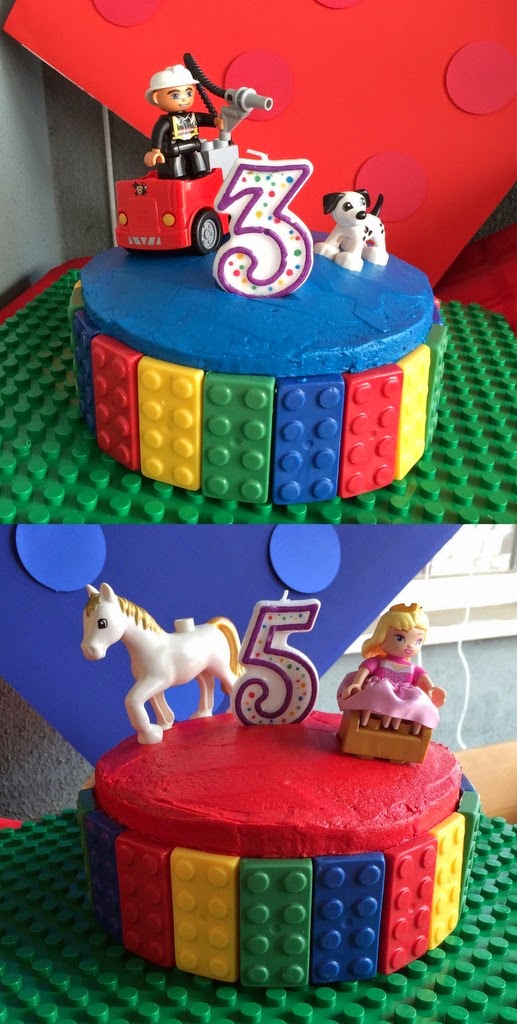 The cakes were very simple to make.  Just 9" cake rounds frosted.  I used Lego Duplos on the top because it was simple and I could customize it to each of my kids loves (firemen and princesses) very easily.  As I mentioned above, the chocolate molds did not work, so I quickly ordered a different set off Amazon to try.  These chocolate candy molds worked perfectly, and I would recommend this set if you are making chocolate Lego bricks. 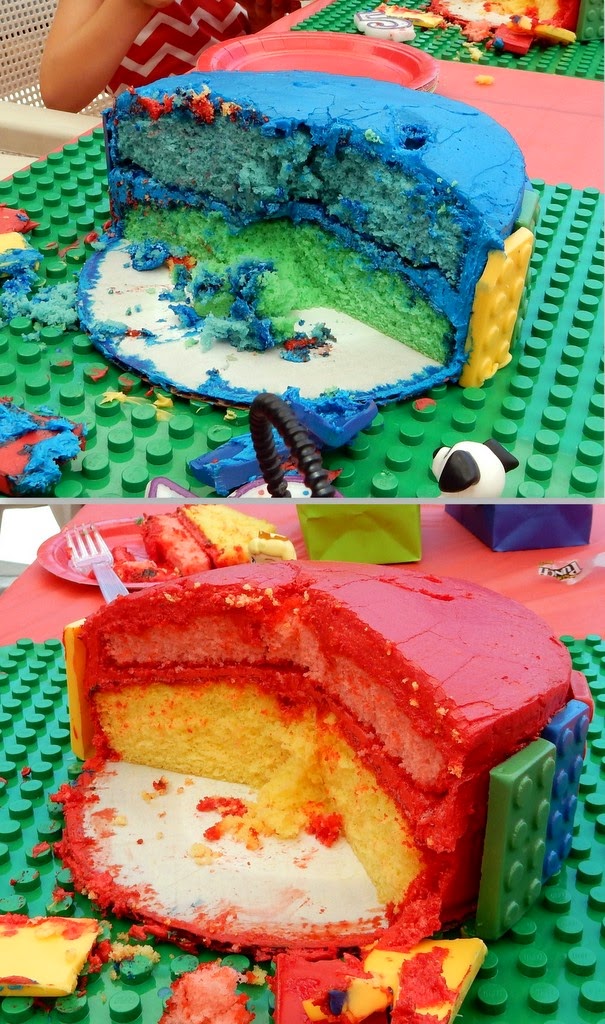 The inside of the cakes were two different colors.  I put food coloring in white cake mix to make these. 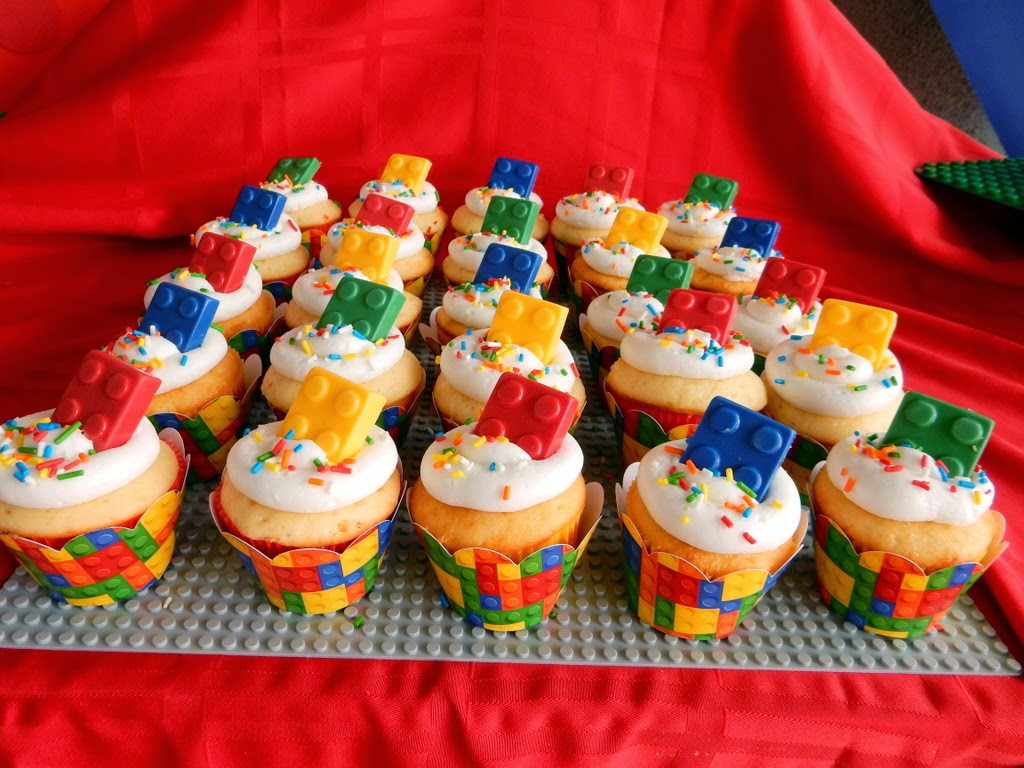 I saw Lego cupcake wrappers on Amazon, but they were outrageously expensive.  I decided to make my own.  I found a Lego border on Google images and used Photoshop to make it as big as I needed it. Then, I borrowed the Cricut Lite Cupcake Wrapper cartridge from a friend to cut the scalloped wrappers. The Lego chocolates on the top are the same ones as the cake; I just cut them in half for the cupcakes. 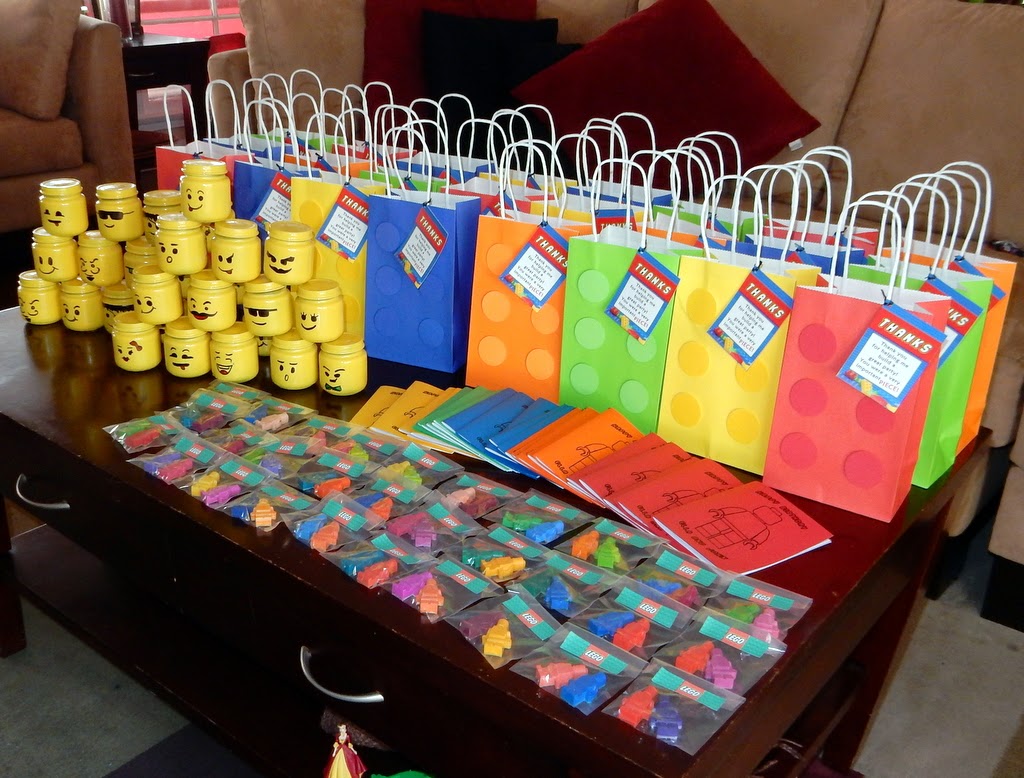 Favor:  Honestly, I couldn't decide on what to do for favors as I had too many ideas! First, I made goodie bags.  The multicolor bags I purchased at Michaels and just added the card stock circles/foam tabs to make them 3D.  I made the tag on Photoshop... 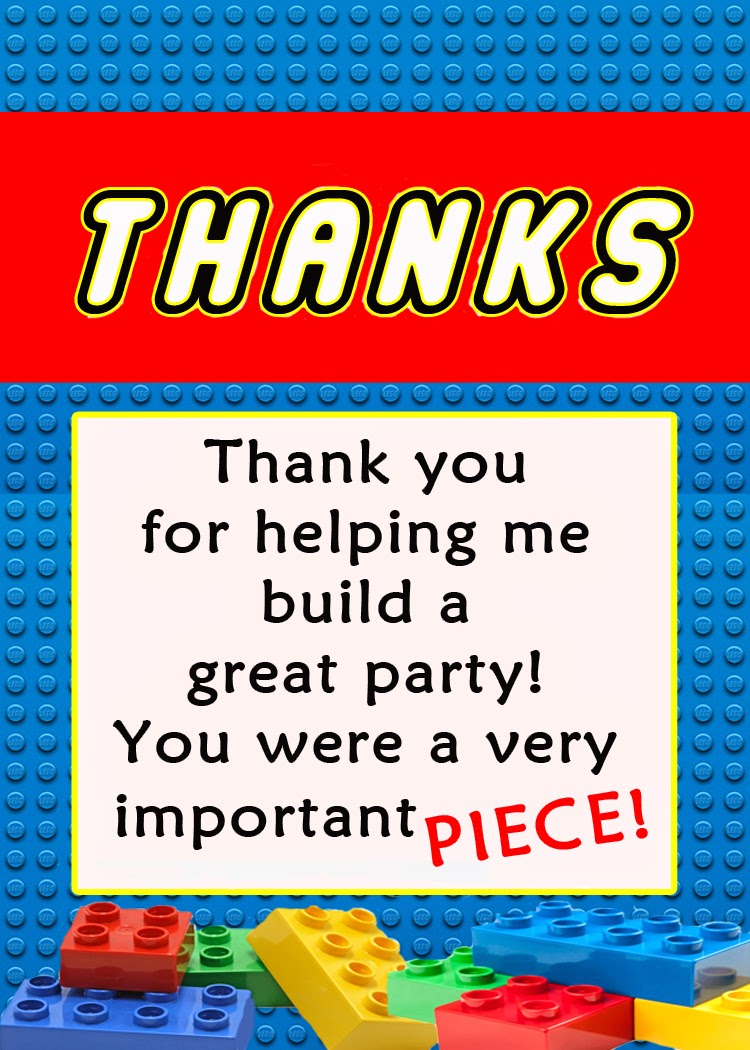 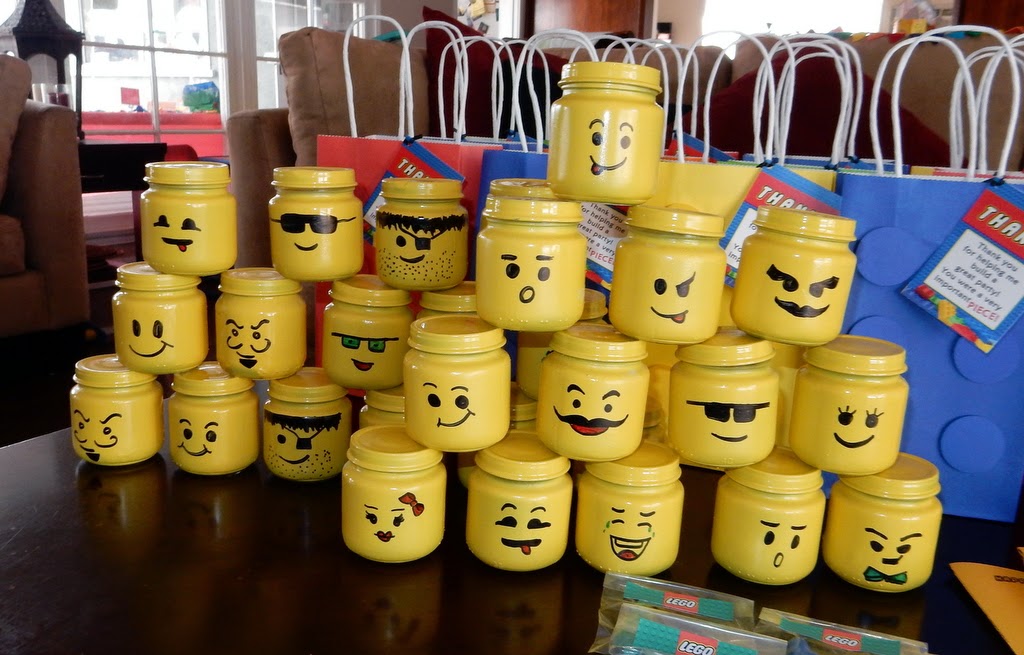 I spray painted baby food jars yellow and added these silly Lego faces with Sharpie markers. Each jar was filled with Lego candy I bought on Amazon. I bought a 3 pound bag to fill these jars about 3/4 full and had plenty. 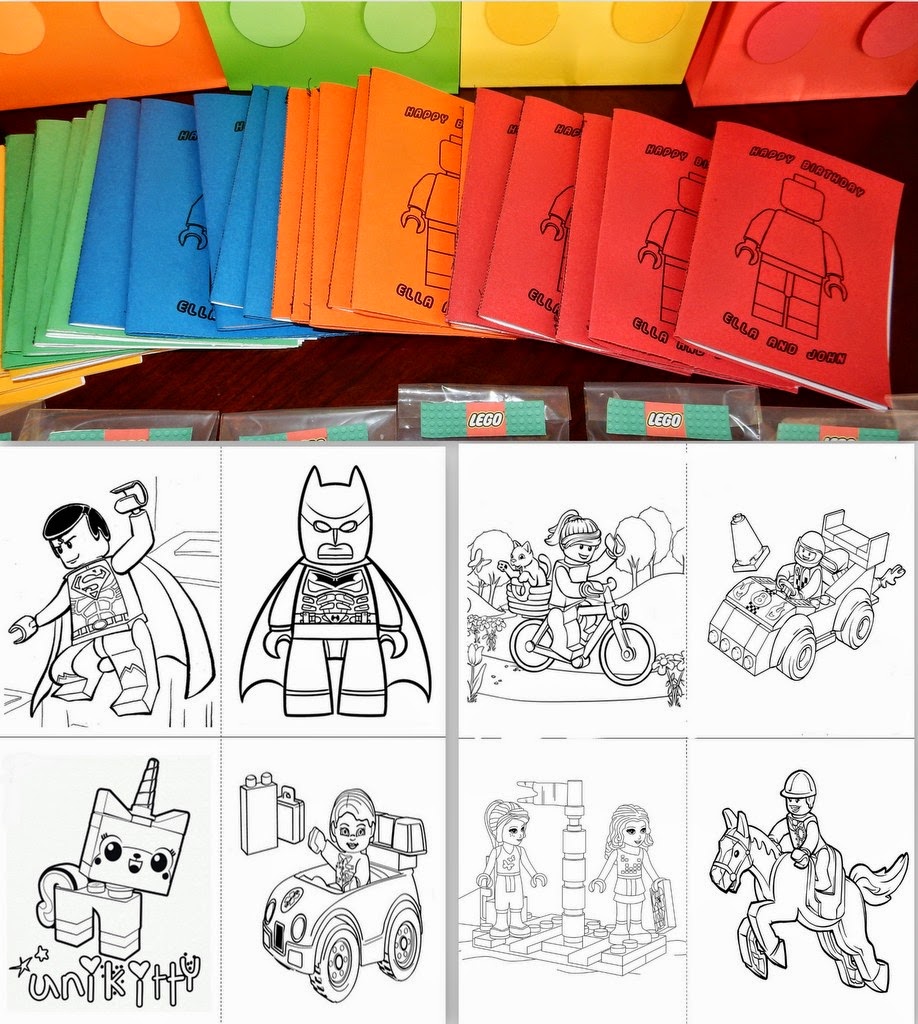 I also made mini Lego coloring books. I found the images on Google and then made them four of them fit on piece of typing paper.  Then I just printed one on back of the other.  It took me forever to find the images and get them positioned correctly.  If you are interested in doing this for a Lego party, I am offering these files at minimal cost. 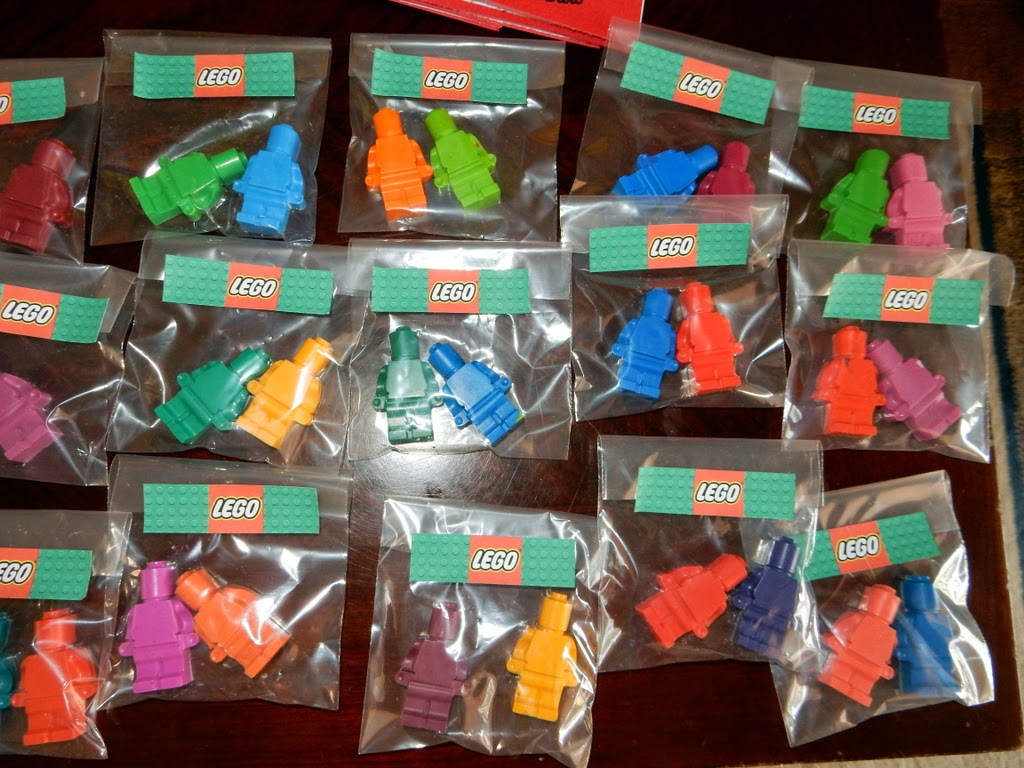 I made the crayons using the Lego man mold I bought.  I bought a few boxes of cheap crayons, soaked them to get the wrappers off easily, and then broke them into 5-6 pieces to put inside the mold.  Then just put them in the oven for about 10 minutes to melt. I only needed one crayon per mold for these.  I placed them in candy wrappers bought at Michaels and made an address label as a sticker to close them up. This was much faster than tying bows!! 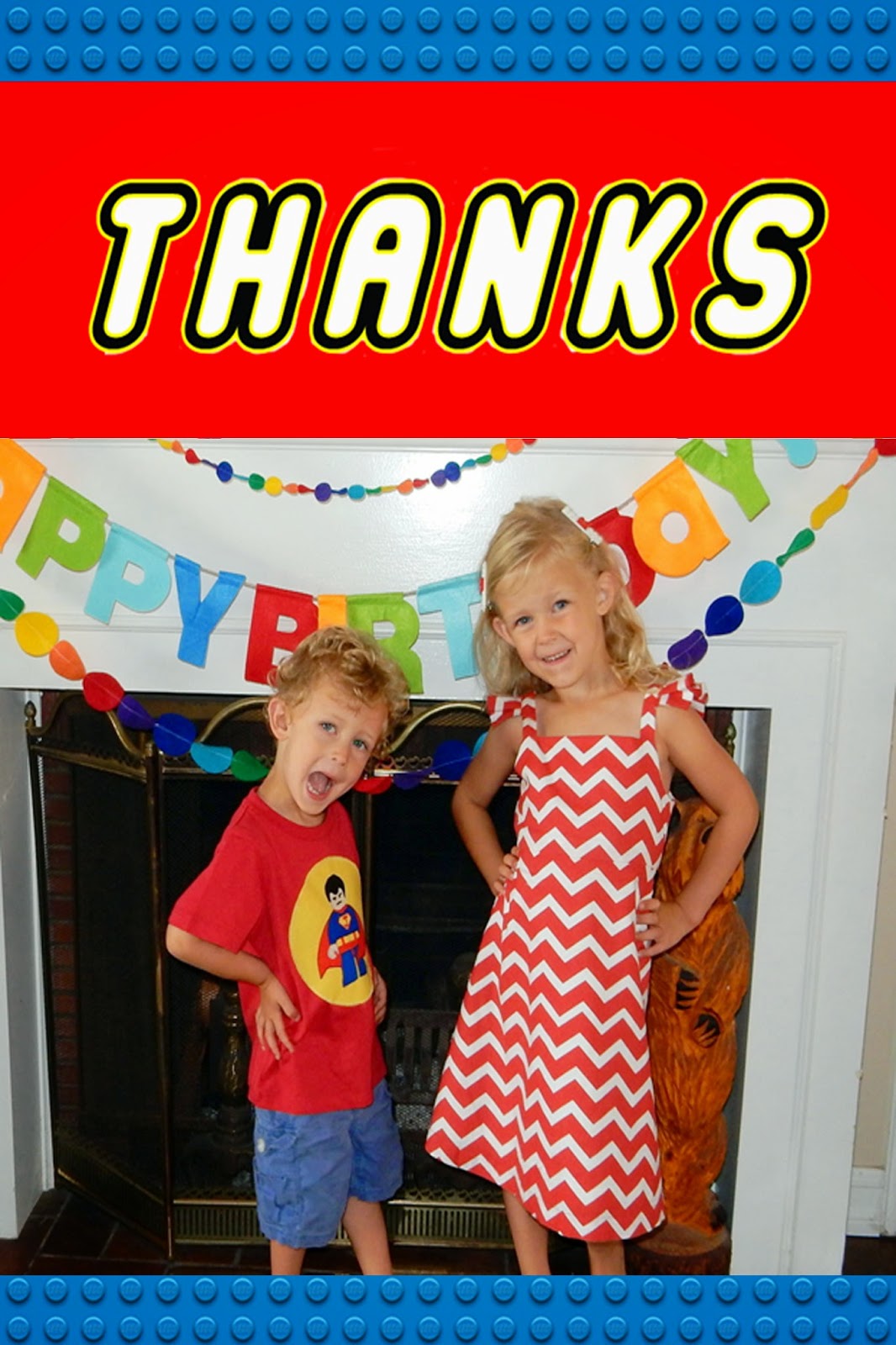 After the party, I took this silly photo of my kiddos to use on a Thank You card.  The border/text I did in Photoshop.

All in all, the party was a success and the kids had a great time. Can't believe my little ones are 3 and 5 already!  Thanks for reading this super long post...Please comment below.  I just love hearing your thoughts!

Posted by InviteandDelight at 8:38 PM

What an AWESOME party! You did a fabulous job!

You are seriously the most creative person I know!

Awesome party!!!
I am pinning everything so I can do them next year!!

Hi! You did a fantastic job with the Lego Party. You are certainly talented. I would love to take you up on your offer for the file of the Lego coloring book if it is still possible.
Thank you,
Afton Kehl

Hi,
My daughter is having a lego party this weekend. I love the coloring book idea. I am making the crayons, but was wondering if you would send me the file for the printable coloring book. My email is dmorris@thenewgrange.org. Thank you so much.

I am planning a Lego party for next month and would love the images for the coloring pages I would like to include them in the coloring book with Lego man crayons.
My email address is merrisa.buffum@gmail.com
Thank you so much!!!

My son is having a Lego Party in January and I would love it if you could send me the file for the printable coloring book. I LOVE all your ideas! Very creative. My email is dinascerbo@yahoo.com
Thank you!

I would LOVE to get a copy of all your printables, I have a 4 year old who wants a lego party next month.
Thank you!

Please do not publish my email, but here it is.
scubafun142@gmail.com

I'm throwing a lego party next months for my kiddos and the coloring book idea is BRILLANT! Can you please send the file to: erika.p.17@hotmail.com?
Thank you a million times over for sharing your hard work with us other mommas!!

You are wonderfully creative. Both my boys are wanting Lego parties next year and I would really appreciate your 'Thanks tab' file and the coloring book file. hoboclaire@yahoo.com. They will add the touch of class! Thank you so much for sharing your hard work.

Hi, I am doing a lego party for my son in three weeks! can you please e-mail me the file for the coloring book. That would be AWESOME.
omantr17@outlook.com