October was the month I started having monthly dinners for my group of friends, so each year I try to come up with a theme that represents the anniversary year.  This October marks 9 years I've been hosting monthly dinners for these amazing ladies.  That's 108 dinner themes over the years!  For this year, I decided on Black Cat, Nine Lives for my theme.  I thought it was appropriate with Halloween coming soon as well.  One funny note is that I absolutely HATE cats, and I am allergic to them! They did make for a fun theme though. 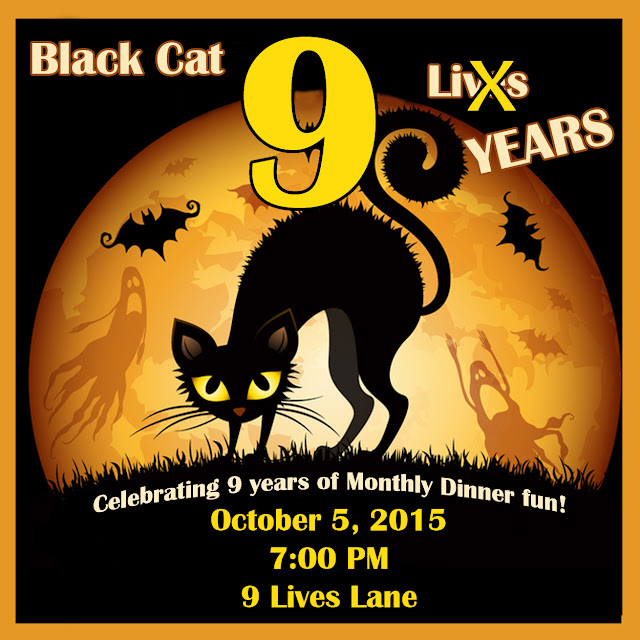 Invite: I found this background image online and just added text using Photoshop.  I liked the image because the cat was prominent, but it also had the Halloween look and party colors I decided to go with. 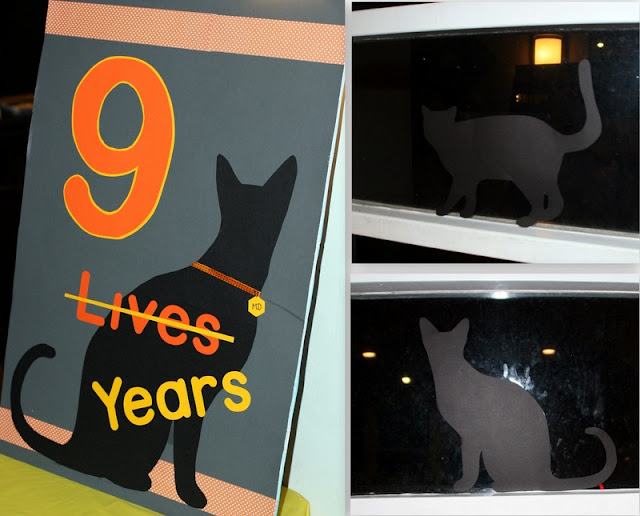 Entry Decor:  As a high school teacher, I have access to an overhead projector, so I projected cat images up on my walls to trace on black card stock and use for my entry.  I put two cat silhouettes in my windows and one on my door poster.  Love the MD (Monthly Dinner) collar I added at the last minute. 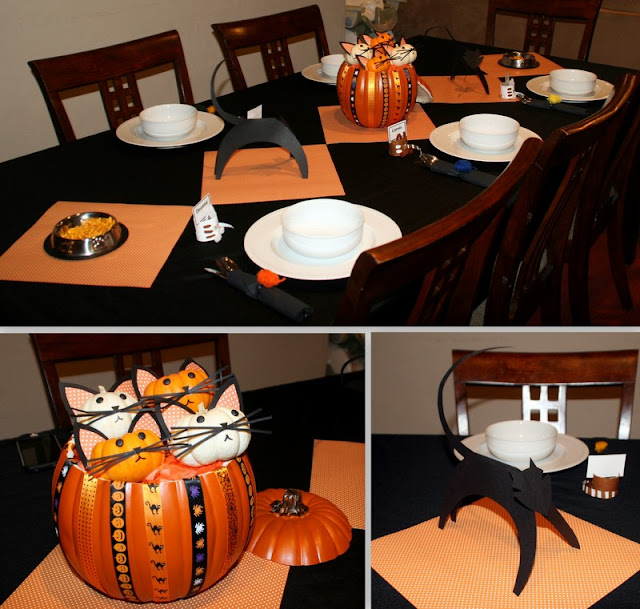 Inside Decor: I used a black tablecloth and placed 12x12 orange scrapbook paper down the center for a table runner.  My centerpiece was small pumpkins I made to look like cats placed inside a larger pumpkin.  I saw this idea on Pinterest, and decided to try it out.  Here's a larger photo... 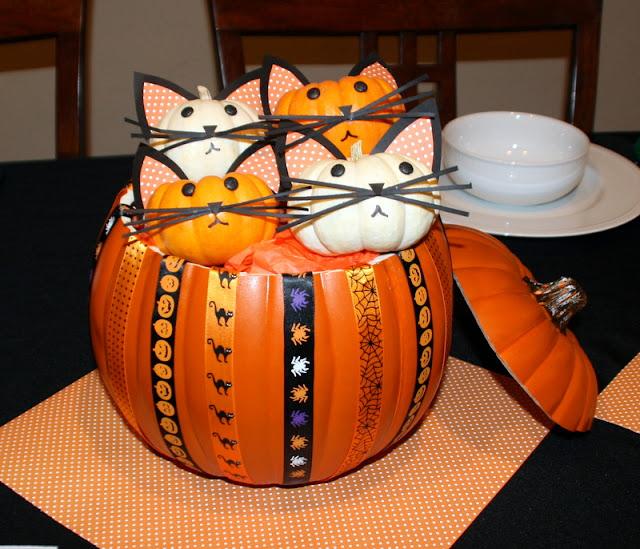 To make this fun centerpiece: 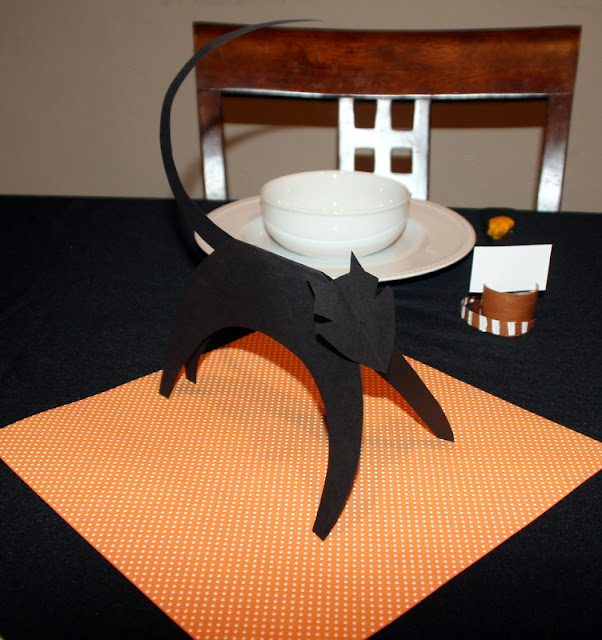 I also made black cats out of cardstock to add to the table decor. 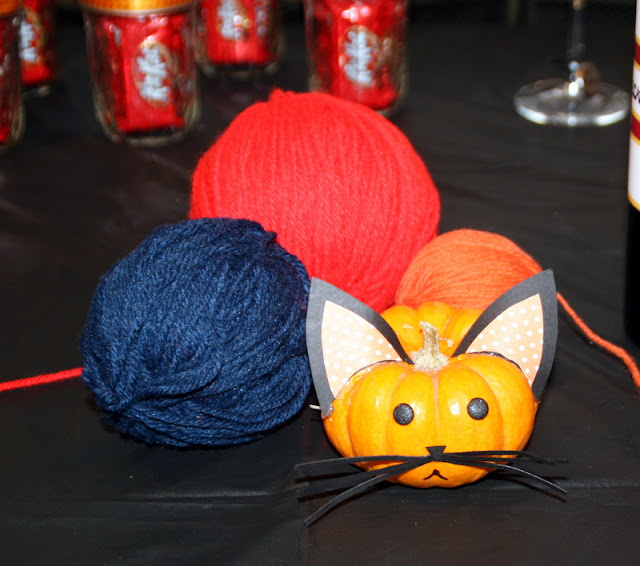 I had an extra mini pumpkin, so I used it as a separate side decoration adding large yarn balls for added fun. 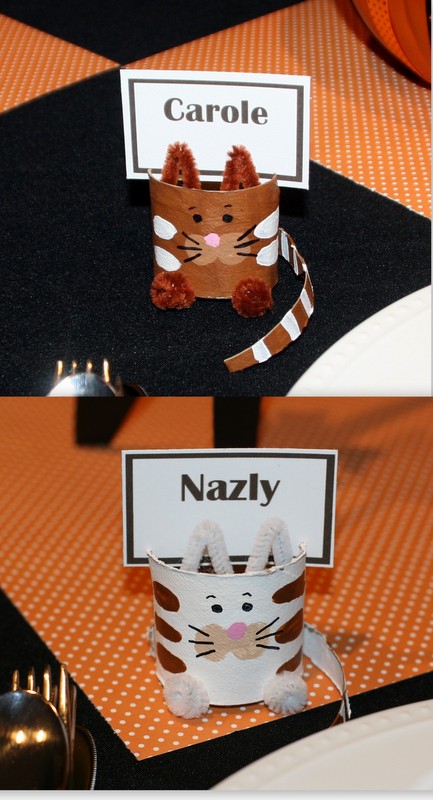 For place cards, I made cats out of toilet paper rolls, cut a slit in the top, and inserted a place card.  These were actually very easy to make. 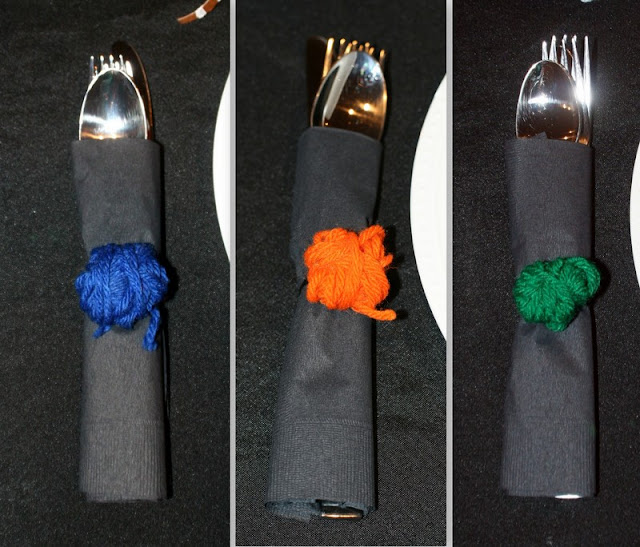 For the napkin rings, I made small yarn balls using remnants of yarn I already had.  Super easy and cute. 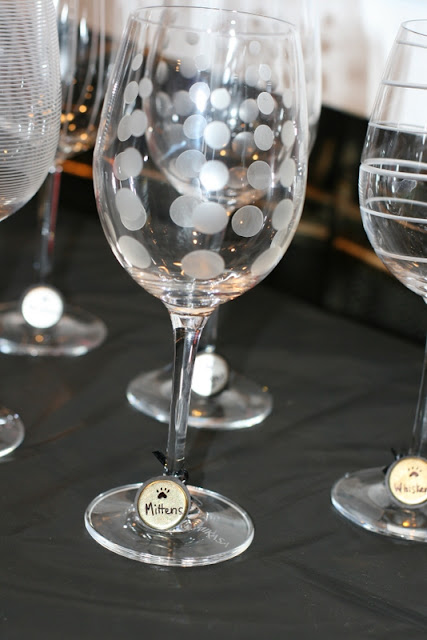 I made wine charms to look like cat collars.  I bought large metal brads from Michaels and wrote popular cat names on the front in Sharpie.  I used black card stock to cover the back and to add a slight border.  I folded half of the brad in half on the back to secure the ribbon like a hoop before tying them onto the wine glasses. 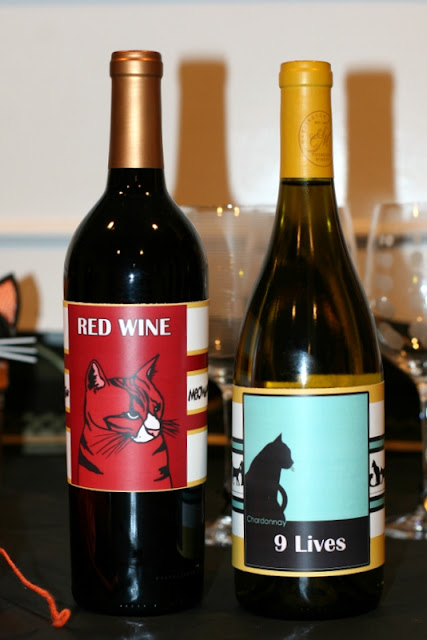 The wine labels I designed were simple. I just found images on Google that I liked and designed the labels with them. 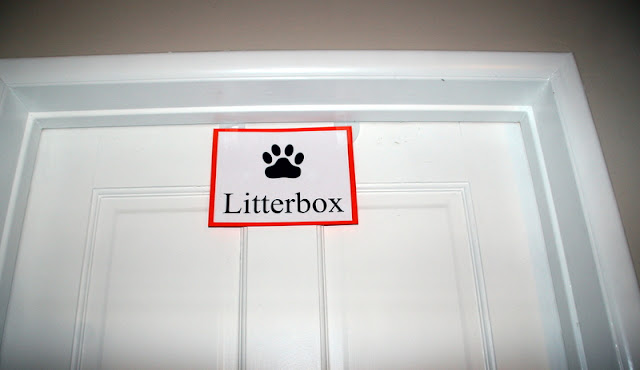 Oh...and don't forget the silly sign on the bathroom door!

Menu:  I bought cat bowls from the dollar store to fill with small appetizers before the party.  In one, I put goldfish, and the other I cut cubes of cheese. 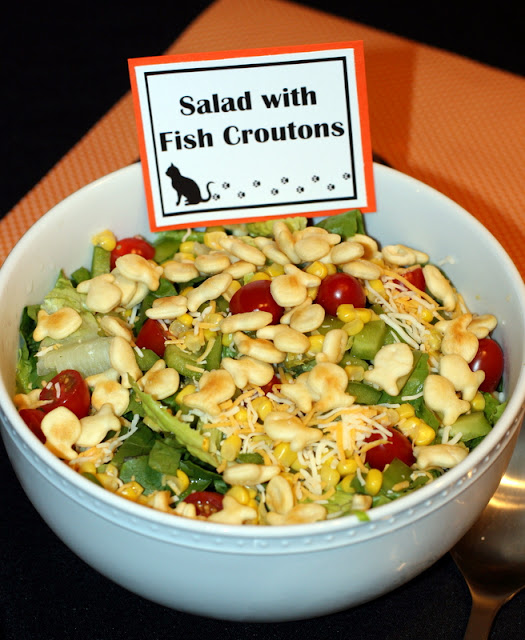 For the side salad, I made a simple green salad, but instead of regular croutons, I bought Parmesan cheese fish crackers.  (These are super yummy by the way!).  On the salad, I put tomatoes, shredded cheese, and corn. 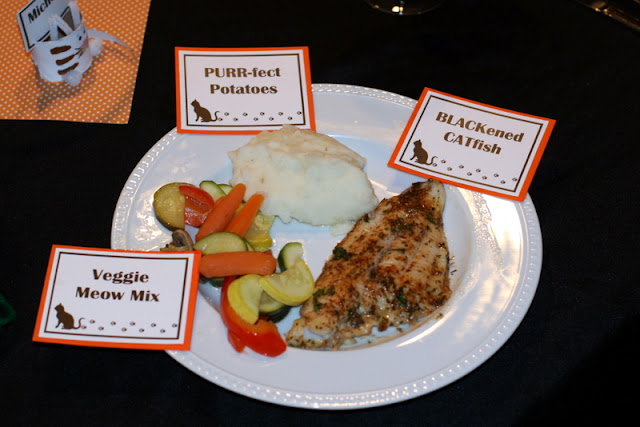 For the main dish, I served Blackened Catfish which was amazing! I followed this recipe found on Never Enough Thyme. One of my guests doesn't like fish, but I used the same rub as the catfish recipe and put it on a chicken breast for her.  Still delicious.  Along with the catfish, I made mashed potatoes and called them PURR-fect Potatoes and a medley of mixed veggies I called Veggie Meow Mix. 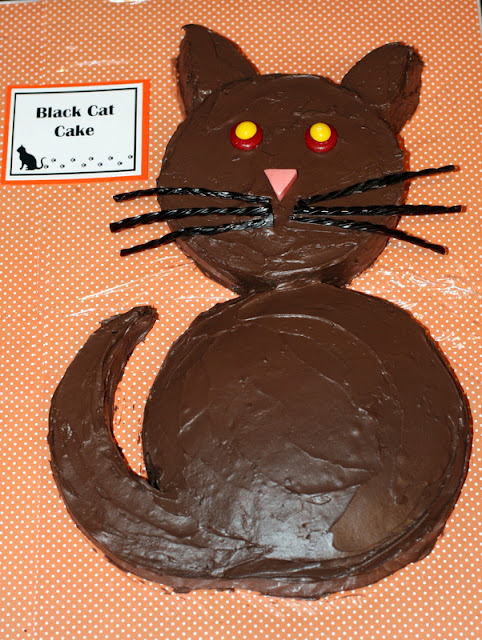 For dessert, I made a black cat cake.  I used a boxed cake mix (Devil's food cake) to make two 9" cakes.  One was the body, and the other I cut to make the head, tail, and ears.  For the sake of time, I used pre-made frosting which is not as amazing as my mom's recipe, but still good.  The eyes I made with red lifesavers and yellow skittles.  The nose is a pink Starburst cut into a triangle.  The whiskers are chocolate licorice that I sliced smaller. 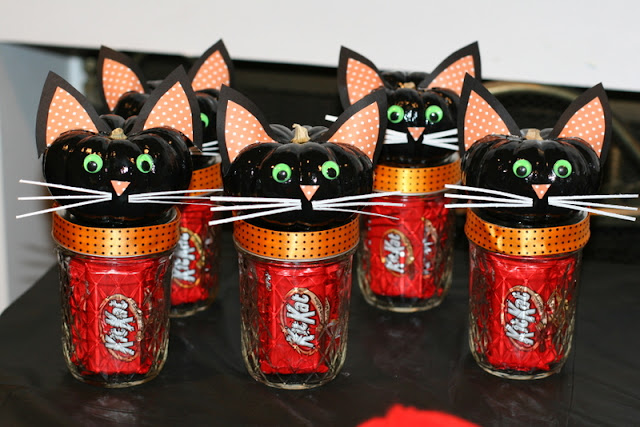 Favor:  The first idea I had for this party theme was to incorporate Kit Kat bars into my favor.  Wasn't sure how I was going to do it, but after making the centerpiece pumpkins, I decided they were so cute, I wanted to incorporate them into my favor.  I made the pumpkins the same way I made the centerpiece, but spray painted them black so that they were a little different. I bought green googly eyes from Michaels and the whiskers were white cardstock.  I hot glued them to the top of mason jars filled with mini Kit Kats.

Can't believe it has been 9 years of hosting these monthly dinners, but I am so grateful to have such amazing women in my life.  Can't wait for another PURR-fect year!

Posted by InviteandDelight at 5:54 PM