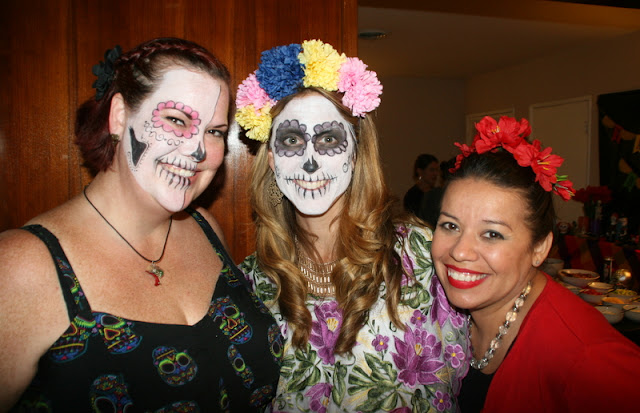 With our monthly dinner falling on the Day of the Dead holiday, I chose Dia de los Muertos as my November theme. I love this holiday because of the bright colors, the focus on culture and tradition, and the idea of honoring the spirits of the dead. Oh...and I love Mexican food. 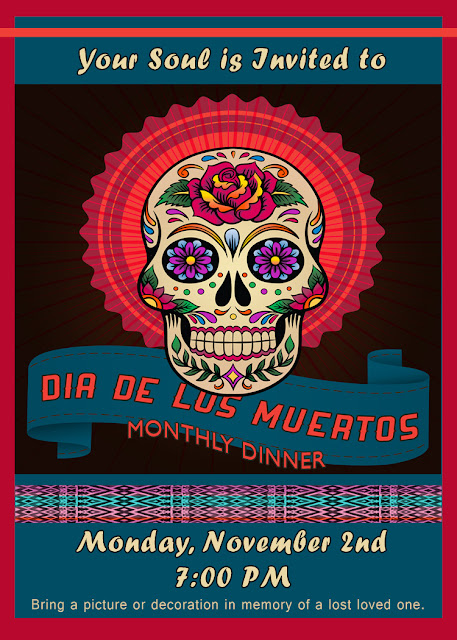 Invite: I designed the invite around an image I found online.  Since most of my guests were coming straight from work, I didn't mention dressing up or wearing makeup.  I did pull in the traditional aspect a bit asking guests to bring a photo or decoration in memory of a lost loved one to place on the alter. 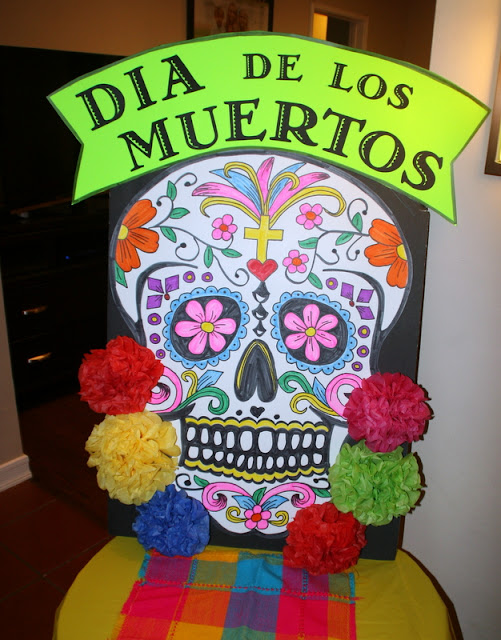 Entry Decor:  I made this sign for my entryway.  I drew the skull (with a little help from my overhead projector) and colored it in with marker.  I made the tissue paper flowers and cut the lettering on my Cricut.  The font is Matador, and it can be downloaded for free online. 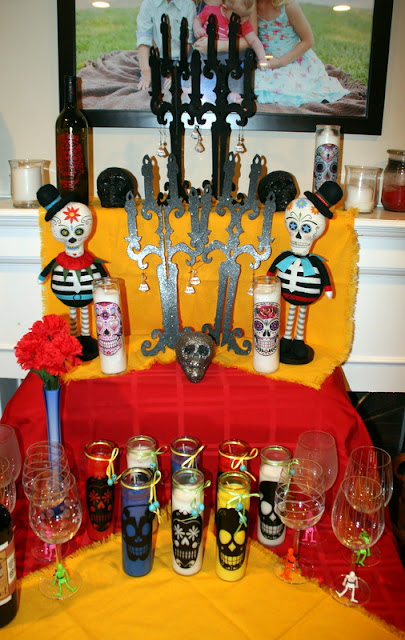 For the "alter, " I borrowed skulls, candles, and some of the other items from friends of mine.  These items really added to the cultural aspect of the party and saved me money in attempting to purchase decorations.  I also made candle favors for each guest which I placed on the "alter." 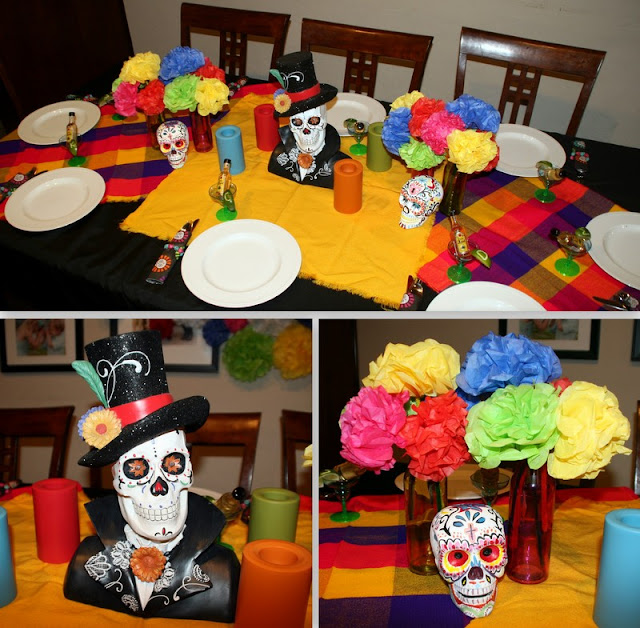 Table Decor:  I set my table with a black tablecloth and placed colorful serapes to add a festive flare.  The amazing centerpiece of the skeleton with a top hat I borrowed from a friend.  It was perfect!  The brightly colored candles were also borrowed. I bought colorful vases from the dollar store and made tissue paper flowers to add to the table.

In front of the flowers, I painted sugar skulls.  I found these orange Halloween skulls at Michaels at 75% off and just painted them to look like sugar skulls. 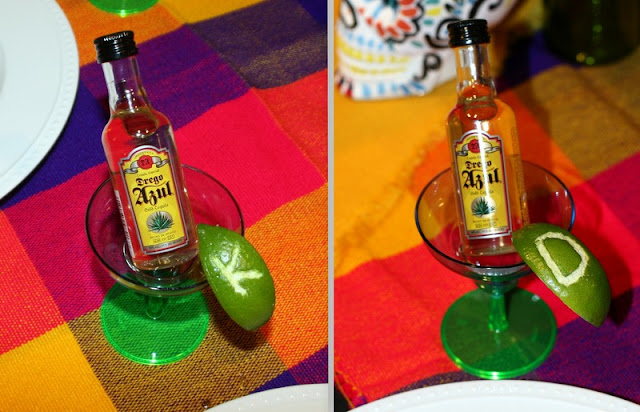 For a place card, I bought mini blue and green margarita glasses from Party City and mini bottles of tequila from BevMo.  I carved the guest's initial out of a lime, cut the slice out, and placed it on the rim of the glass.   Carving was a bit difficult in that I couldn't find a good tool to help me do it. I ended up using a small flat-head screwdriver, so they didn't come out as perfectly as I'd hoped, but they were still cute.  I also did these last minute to avoid the limes drying out.

I bought these napkins at Target and then made the skull rings around them.  The pink and blue skulls I found at Michaels in the bead section.  The skulls were expensive, but luckily they were on sale and I had a coupon. 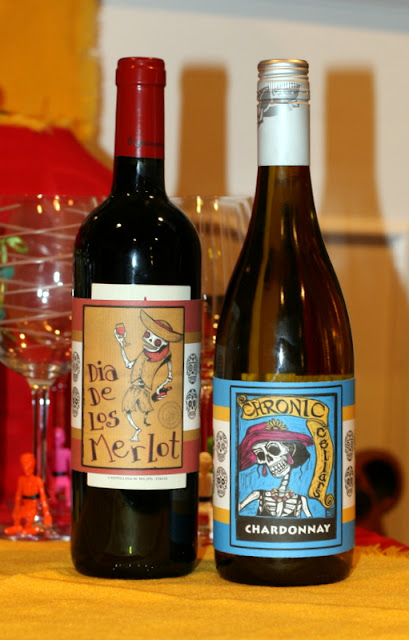 I made labels for my wines that went with the theme. They were made from images I found online and just created a label around them. 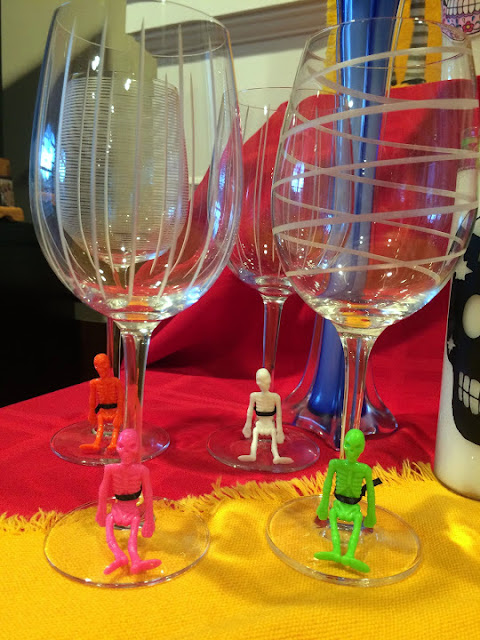 For wine charms, I used these colorful mini rubber skeletons I found at Target.  There were 8 in a package for only $1!!  I picked them up originally not sure what I would use them for, but decided they were perfect for wine charms. 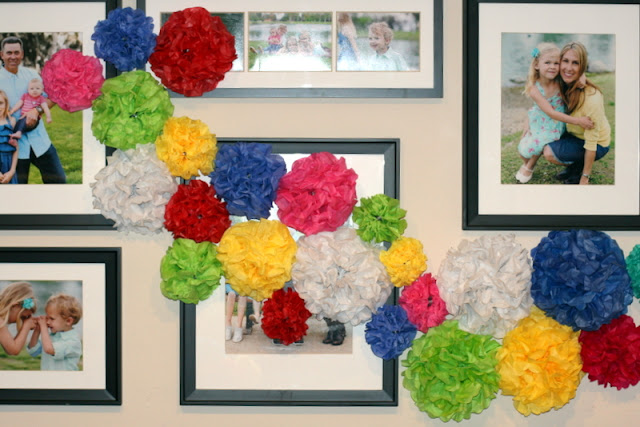 Behind the table, I added a collage of tissue paper flowers. 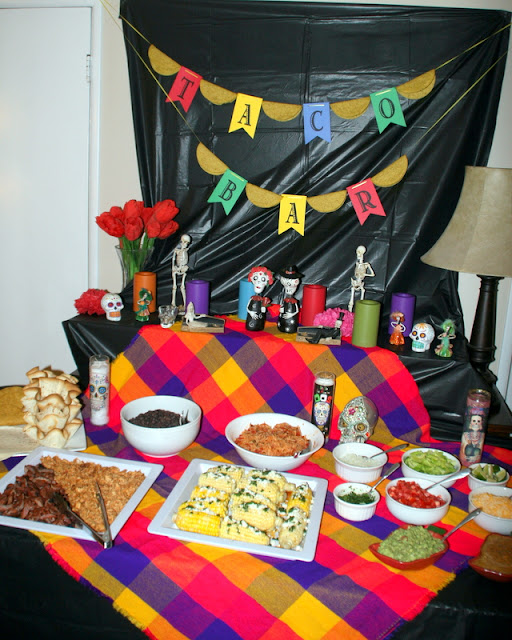 Menu: We started off with chips, salsa, and guacamole as an appetizer.  For the main meal, I created a Taco Bar. 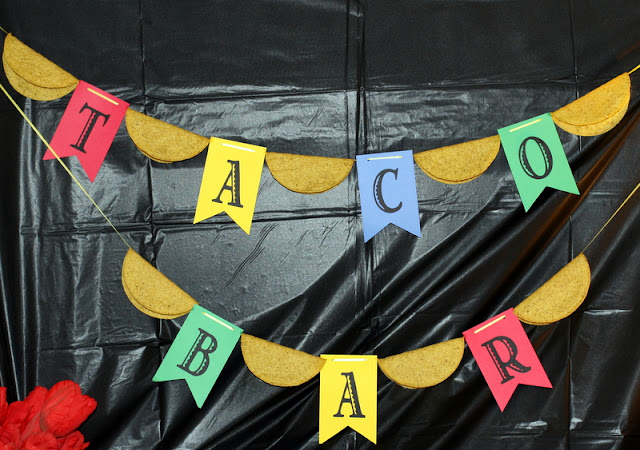 I made this banner with scrapbook paper and real tacos.  Don't you just love it? 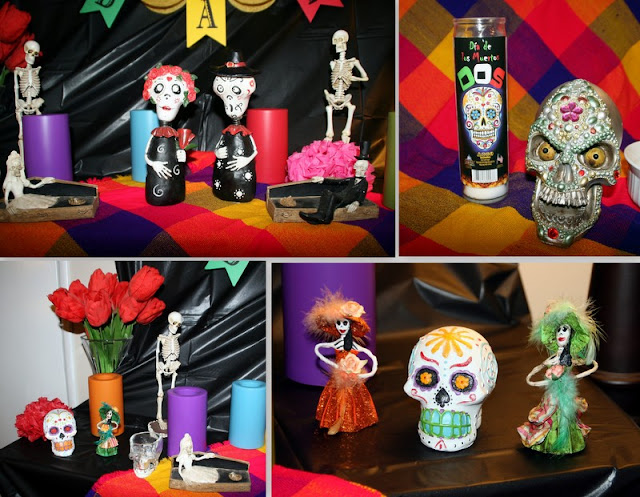 I decorated the Taco Bar with candles and more of the items I had borrowed from my friend. I just love how these additions bring out the festive nature of this party. 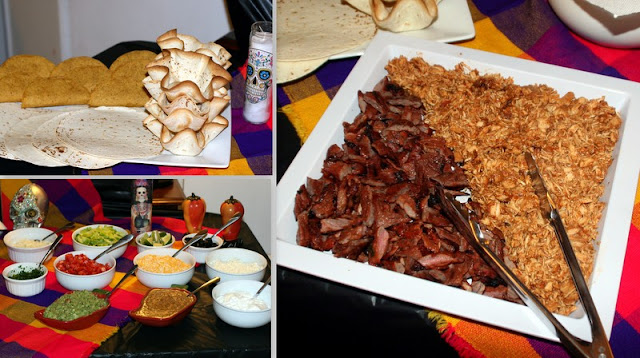 For the Taco Bar, I had both hard and soft shell tacos as well as mini tortilla bowls I made.  For the meat, I made shredded chicken in the crock pot and cooked carne asada on the grill.  The chicken is only 3 ingredients - one jar of salsa, one packet of taco seasoning, and your chicken.  Cook it on low for 6-8 hours and enjoy!  All the fixings made for a super yummy meal. 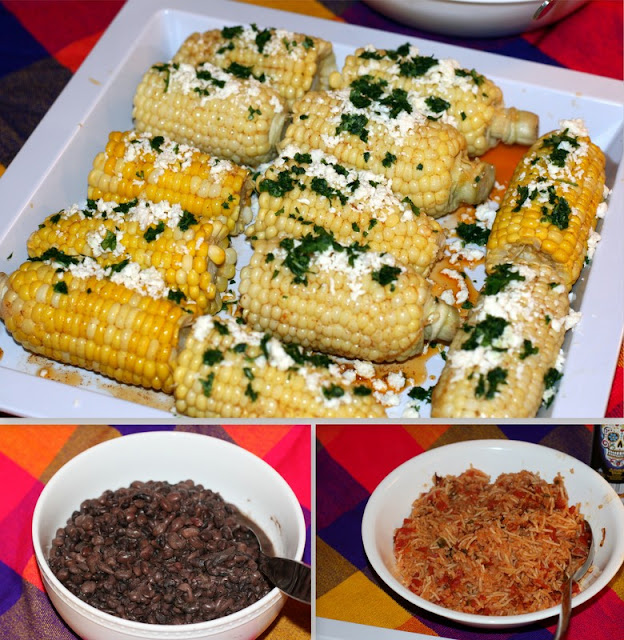 We also had Mexican corn, rice, and beans. 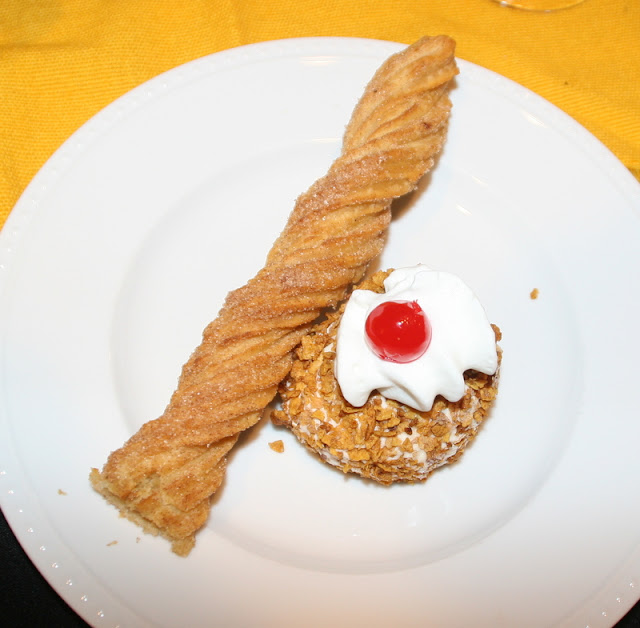 For dessert, we had "fried" ice cream and churros.  The churros I bought already made from Costco on my way home for work.  I warmed them in the oven and cut them in half.  The "fried" ice cream is not really fried at all, but was very tasty.  I started by making round balls of vanilla ice cream.  While these were hardening, I made the mix.  It is just corn flakes, butter, cinnamon, and sugar.  I baked it for a bit in the oven.  An hour before the party, I rolled the ice cream balls in the mixture and placed them back in the freezer until serving time.  I chose to garnish them with a dollop and whip cream and a cherry. 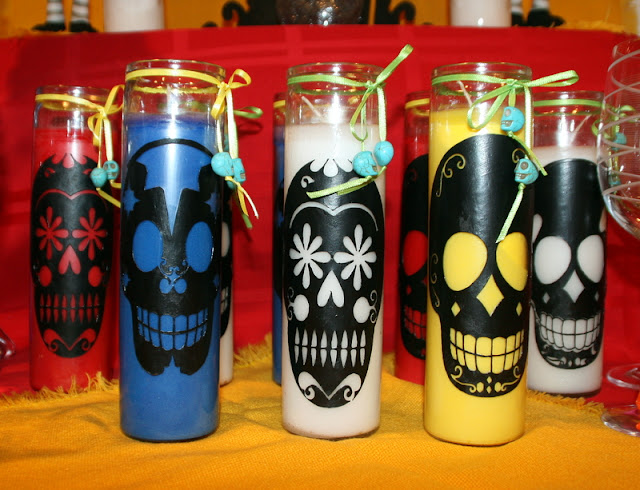 Favor:  I made these super easy candles for my favor.  I bought the candles at the dollar store.  The sugar skulls I cut out of my Cricut and then used Mod Podge to adhere them to the glass.  I used leftover beads from my napkin rings to string on the end of ribbon and tied this around the top. Cheap and easy! 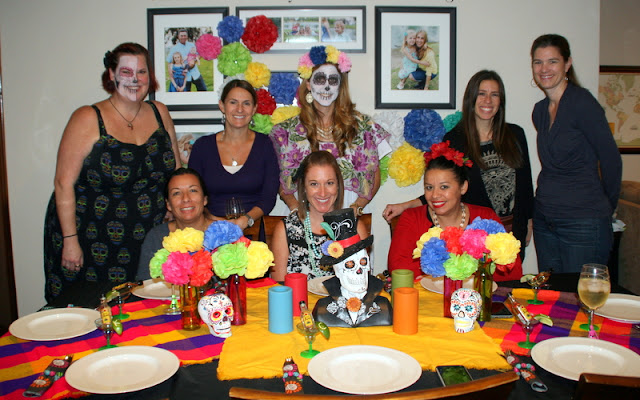 We had so much fun at our Dia de los Muertos dinner.  Thank you ladies for coming!

Posted by InviteandDelight at 4:48 PM