Watching A Charlie Brown Christmas this time of year is one of my favorite holiday traditions, so I couldn't pass up making this my December monthly dinner theme. It was really a fun theme to get the holiday spirit rolling, and we had a blast as usual. 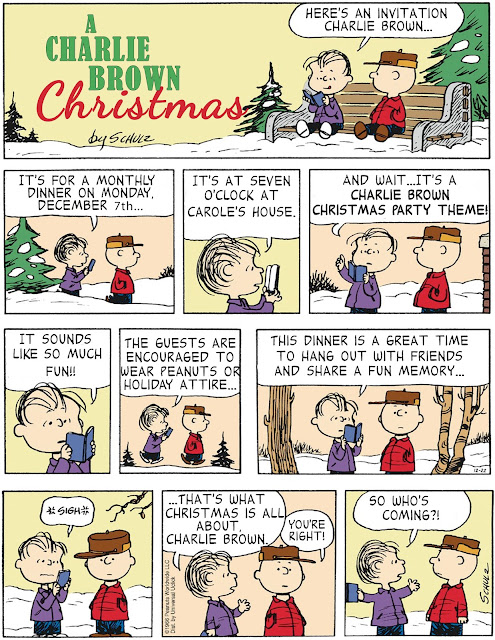 Invite:  I wanted to create something original for the invite.  I decided to create the invite out of a Peanuts comic strip, so I spent hours surfing the web for a winter-themed comic strip that I could alter.  Once I found it, I used PhotoShop to replace the old text with what I wanted to say as well as create a new title for the comic.  I downloaded the Peanuts font called Groundnut for all the writing inside the bubbles.  Have to toot my own horn here, because don't you just love how it turned out!? 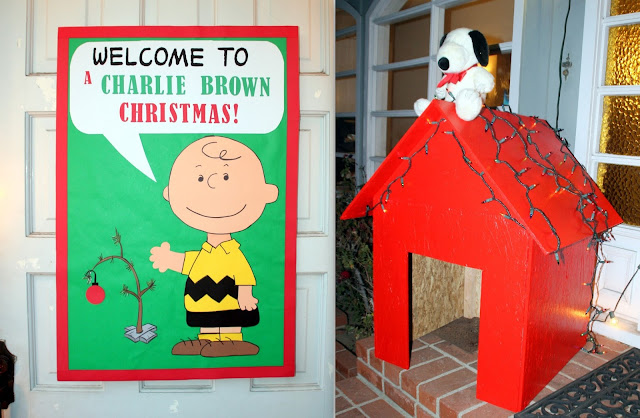 Entry Decor:  I made the Charlie Brown sign on form board.  I used my Cricut to cut the letters and free-handed the Charlie Brown.  I spoke with the woodshop teacher at my work/school about making the doghouse.  I paid him for the materials, and he made it for me!  All I had to do was paint it and add the lights and a stuffed Snoopy that my kiddos already had. 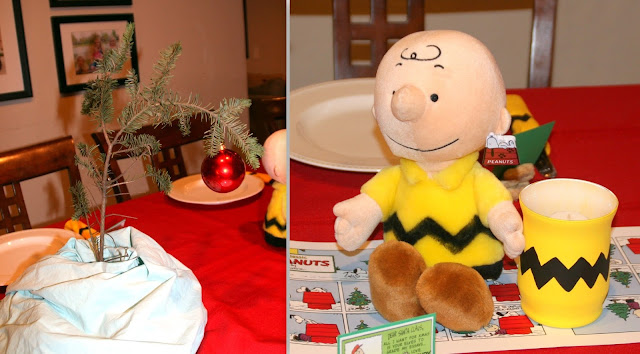 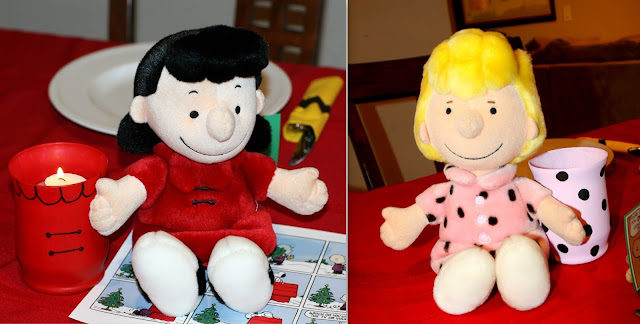 Inside Decor: I used a red tablecloth, and printed out several 8.5" x 11" Peanuts holiday comic strips to tape together and use as a table runner. I made a Charlie Brown Christmas tree out of a stem from my family Christmas tree, my son's blue crib sheet, and a red ball ornament I found at Dollar Tree. My kids already had the 3 character stuffed dolls, but I made the vases to place next to each one.  I bought the clear vases from the Dollar Tree and painted them with acrylic paint. 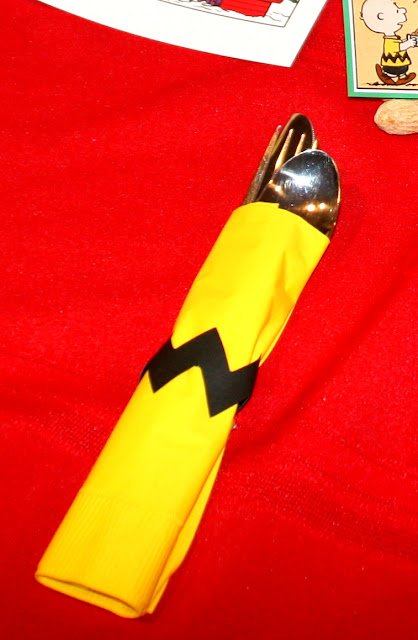 For my napkins, I bought bright yellow napkins and made a zigzag out of black card stock. I glued the zigzag together on the back. 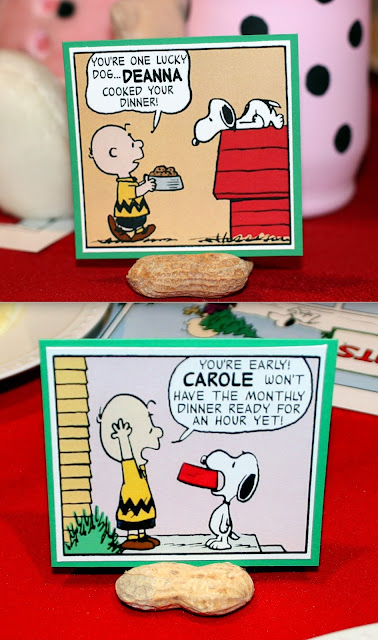 For place cards, I used the same idea as the invitation.  I found a box from a Peanuts comic strip whose picture visually matched each of my guests.  Then, I used PhotoShop to change the speech bubbles to reflect each guest and include her name.  I made the place card stands out of shelled peanuts that I hot glued together.  You can't see, but there are three peanuts on the bottom and then two stacked on top of the back peanut to hold the place card upright. 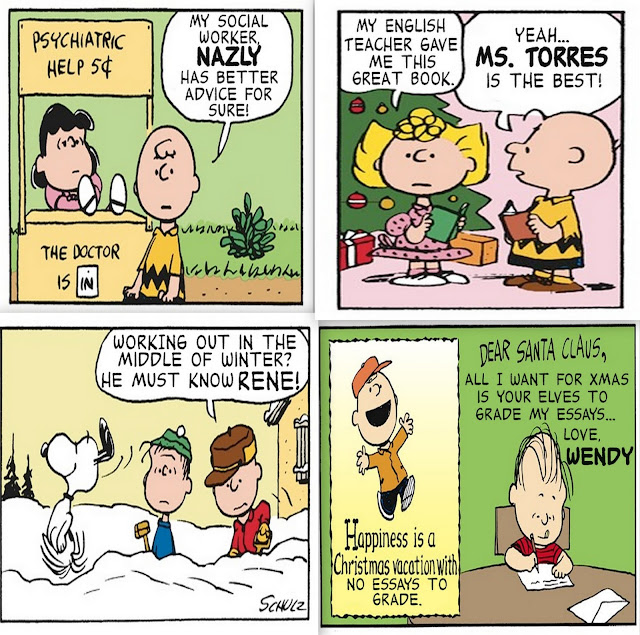 Here are a few more of the place cards for pure enjoyment. I especially love the two for my English teacher friends! 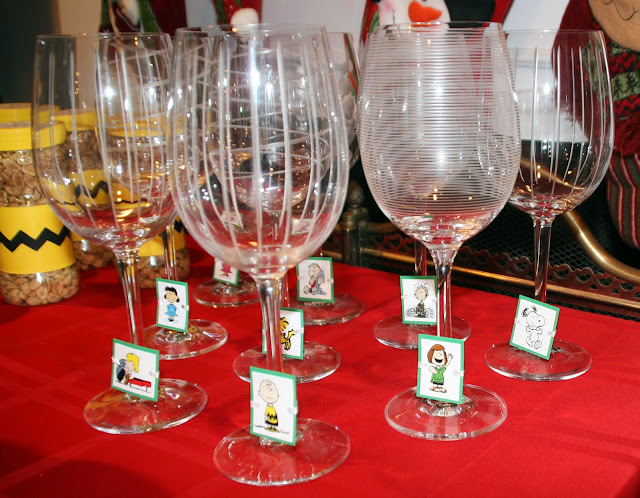 For wine charms, I printed out photos of the characters in A Charlie Brown Christmas to attach to each glass. 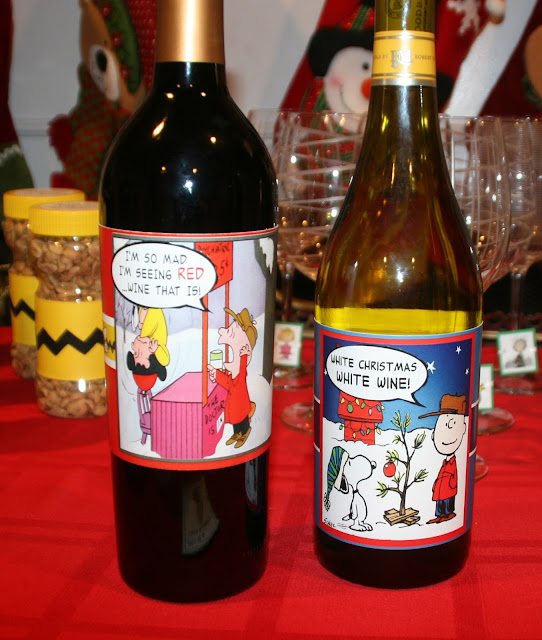 I made the wine labels out of two Peanuts comic strips that I adapted to fit Red and White wine. 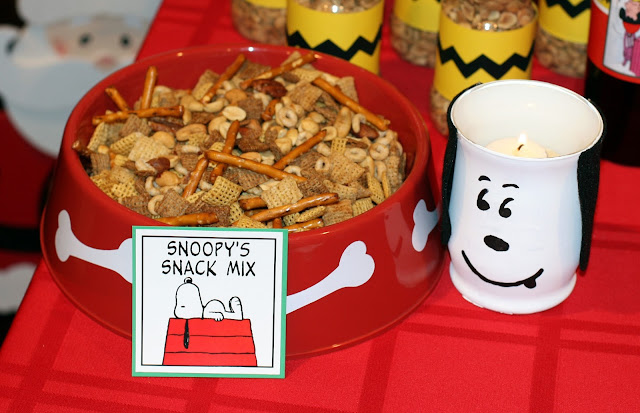 Menu:  I started the evening with a few appetizers.  The first was Snoopy's Snack Mix.  This is my mom's recipe of Chex Mix which is absolutely yummy. I bought a dog bowl from the Dollar Tree to serve it.  The Snoopy is another clear vase I painted.  The ears are black felt. 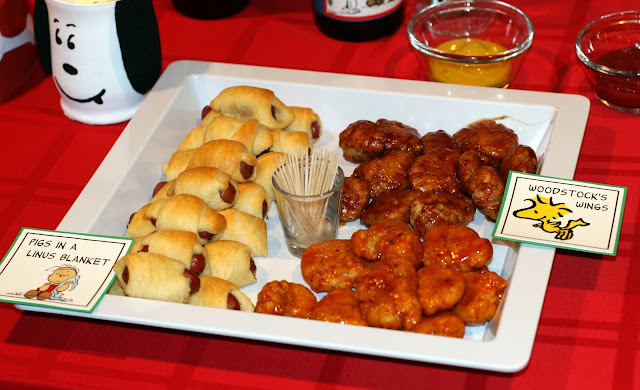 I also served pigs in a blanket and two flavors of boneless chicken wings.  I called these Pigs in a LINUS blanket and WOODSTOCK'S wings. 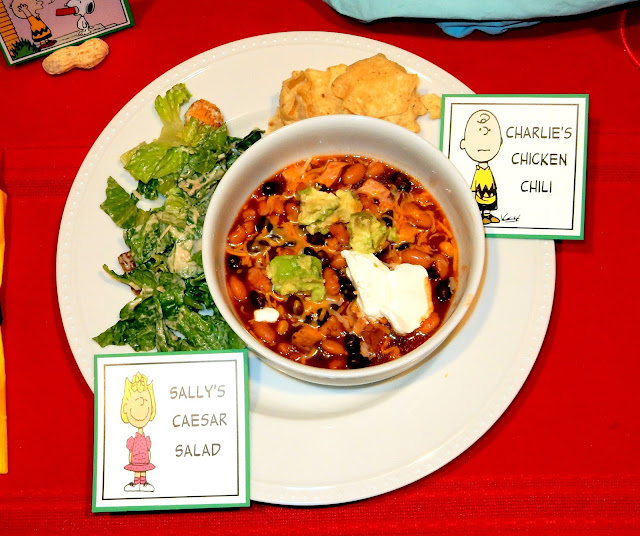 For the main dish, I made my favorite recipe for Chicken Chili.  It is so easy to make and it just heats in the crock pot, so it is always a go-to recipe for me. I called it Charlie's Chicken Chili to have some alliteration.  Alongside the chili, I served a Caesar salad I called Sally's Caesar Salad. 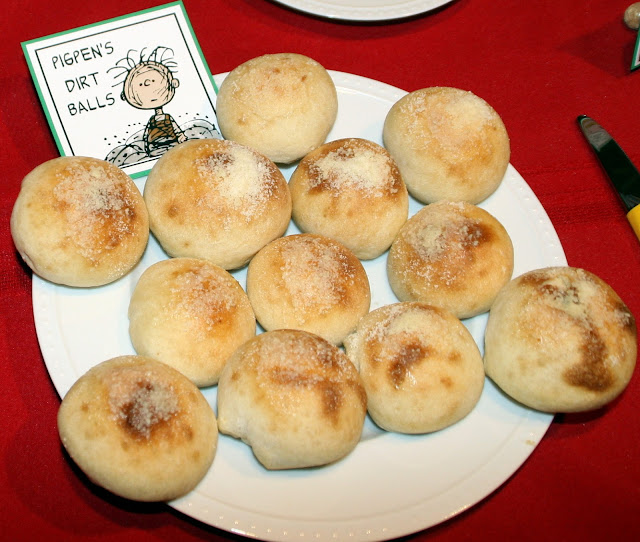 I also served rolls. I bought Pillsbury breadsticks and shaped them into balls instead. After they cooked, I spread butter on the top of them and sprinkled some Parmesan cheese. These were Pigpen's Dirt Balls. 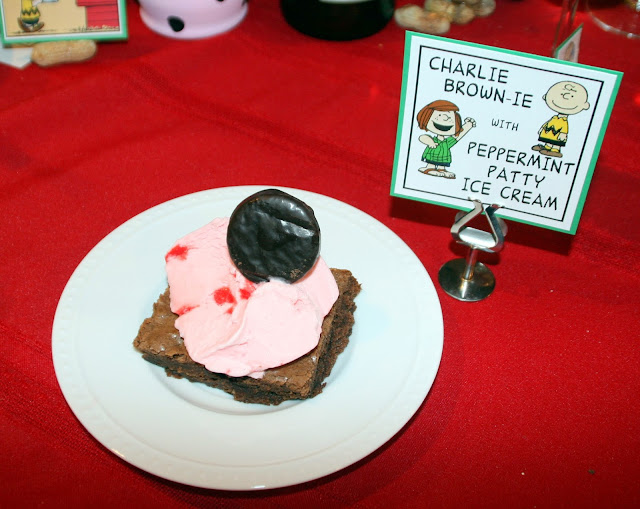 For dessert, I kept it simple.  I made brownies and served them with a scoop of peppermint ice cream. I also added a peppermint patty as a garnish.  I called them Charlie Brown-ies with Peppermint Patty Ice Cream.

Favor:  I bought jars of peanuts from the Dollar Tree to use as my favor. I used card stock to make the yellow band and black zigzag to go around each one. I created the round label for the top with one of my favorite quotes from A Charlie Brown Christmas - "It's not what's under the Christmas tree that matters, it's who's around it." 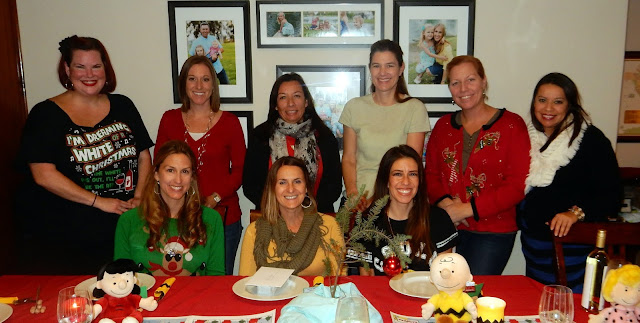 Posted by InviteandDelight at 2:24 PM

What a wonderful dinner party! I love all the themed foods and the comic strip invitation. I am looking for ideas for a Peanuts themed ice cream party and I am totally stealing the "Charlie Brown-nies" idea!

Absolutely adorable! I'm borrowing some of your clever design ideas for our office. Thank you for sharing the spirit .. and Peanut's joy.