Everything is Better with Bacon Party!

While the majority of people are thinking of getting in shape and eating healthy as their New Year's Resolution, I decided to make our January monthly dinner theme the exact opposite.  Our theme was...Everything is Better with Bacon! The inspiration for this theme came after one of my girlfriend's (who loves bacon) received a 2016 Bacon calendar for her birthday a few days before this party. Seeing just the cover of this calendar gave me the idea, and I ran with it. 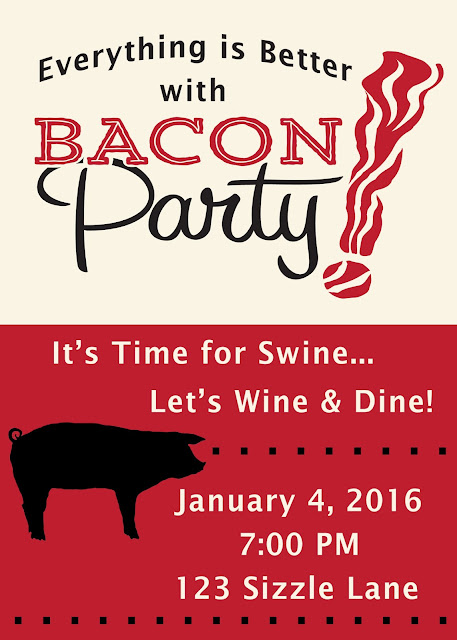 Invite:  I made the invitation on Photoshop.  Not super creative this month, but I do like the saying, "It's Time for Swine...Let's Wine & Dine!" 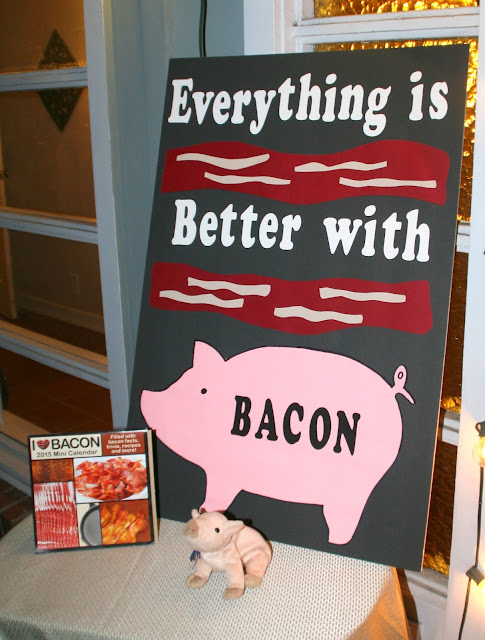 Entry Decor:  As usual, I made a sign out of foam board and card stock.  I used my Cricut to cut the letters and free handed the pig and bacon.  Next to the sign, I set out my children's beanie baby pig and a mini calendar I borrowed from a friend. 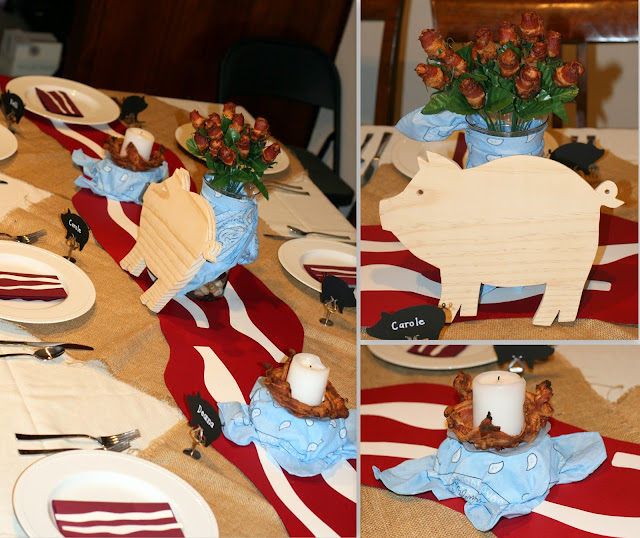 Table Decor:  I borrowed some burlap squares to lay on top of my tablecloth.  Then I made a bacon table runner out of card stock.  For centerpieces, I made a vase of bacon roses, a wooden pig, and bacon candle holders. 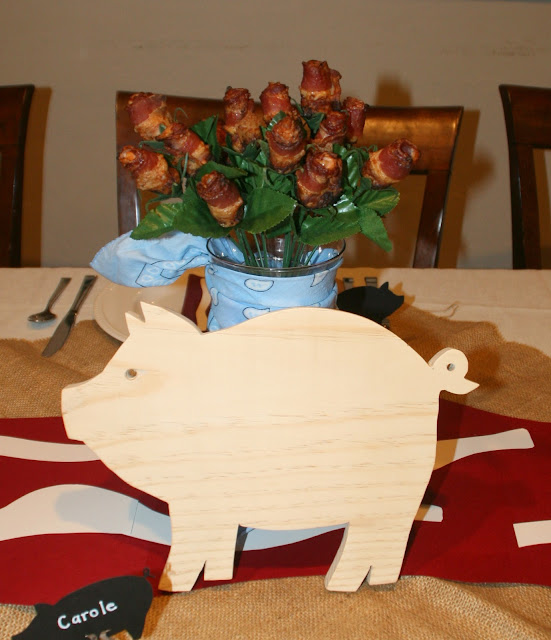 The bacon roses for my centerpiece were very simple to make.  I just rolled each piece of bacon and secured it with two toothpicks.  The toothpicks kept the rose elevated when I placed each rose in a spot on a mini muffin tin.  I baked them in the oven until they were cooked through.  Once they cooled, I pulled off the petals of some fake flowers I bought at the dollar store, and stuck the stem through the bottom of the bacon rose.  I needed something heavy to hold the stems in place, so I filled the vase with rocks and tied a light blue handkerchief around the vase to give it some color. 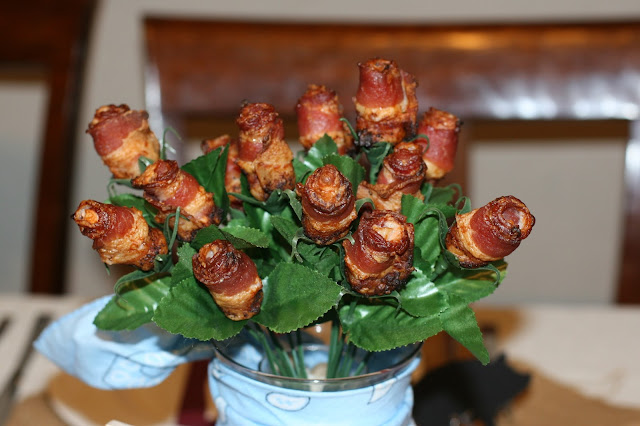 Here's a close up of the bacon roses. 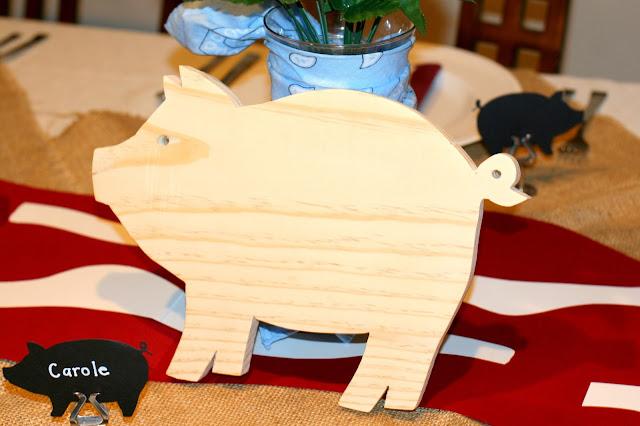 For the wooden pig, I simply traced a pig image on wood and my husband used a scroll saw to cut it out.  My kids now use it as a cutting board in their pretend kitchen. 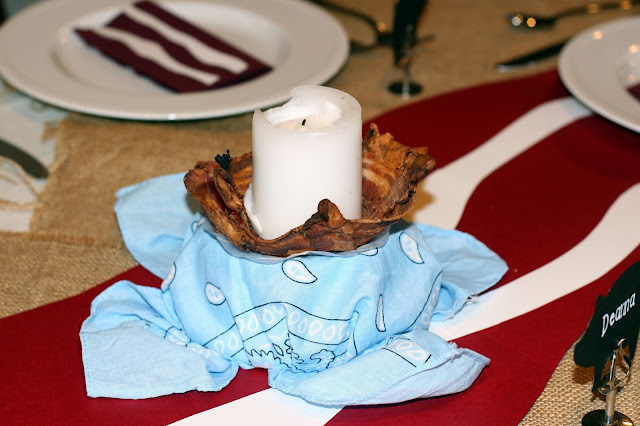 To make the bacon candle vases, I used my tortilla shell pans.  I turned one pan over on a baking sheet and then layered strips of bacon to cover the bottom and up the sides.  I wrapped 2 other strips of bacon around the outside. I set another tortilla shell pan on top of that to keep it in place while baking.  Not sure if you have to do this, but it seemed to work.  I baked them in the oven about 15 minutes or until they were cooked and crispy. I set each "vase" on an upside-down cereal bowl that was covered with a handkerchief.  I put a little wax paper under the bacon so it wouldn't get grease on the handkerchief. 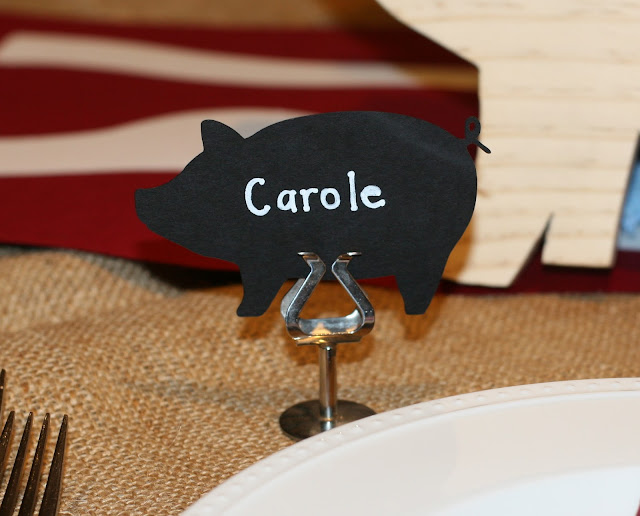 For the place cards, I wanted to find wooden pig die-cuts to paint with chalkboard paint, but I couldn't find them at the craft store.  Instead, I used my Cricut to cut pigs out of black card stock, and I wrote the guest's name with paint pen. 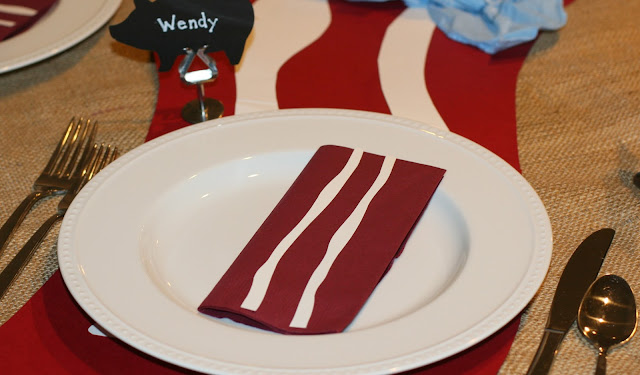 I wanted my napkins to look like bacon too.  I bought burgundy napkins and then cut white card stock in wavy strip shapes to place on top. 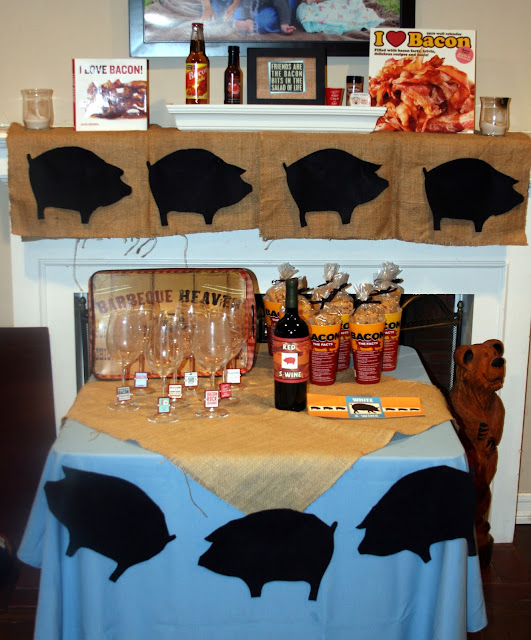 Drink Table Decor: I used the burlap again on my drink table and to make a hanging banner. I created a pig garland with black felt pigs.  On my mantle, I borrowed several items from my bacon-loving friend... 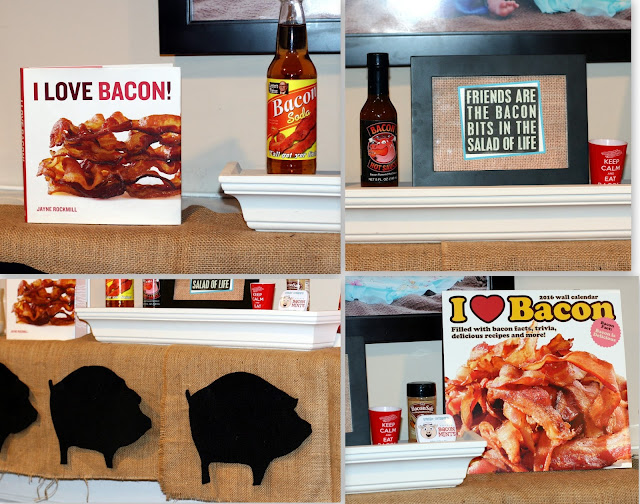 The 2016 Calendar that was the inspiration for the party as well as some other bacon themed items (cookbook, Bacon Soda, bacon mints, etc.). I liked the saying about Friends are the Bacon Bits in the Salad of Life, so I printed it out to frame. 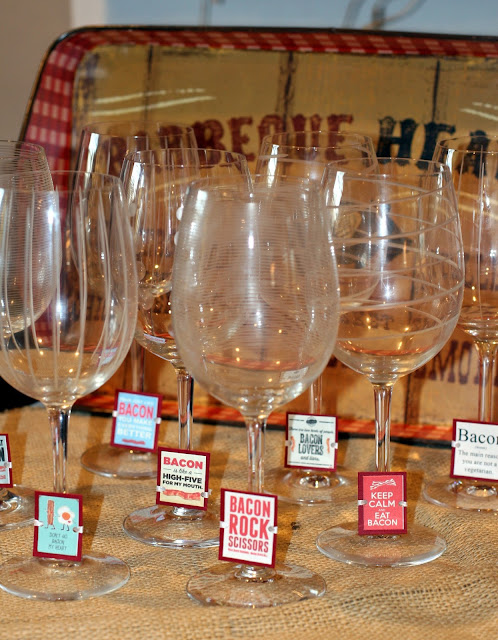 For wine charms, I found various sayings about bacon on Google images and printed them small enough for charms.  I backed them in card stock and tied them around the glass stems. 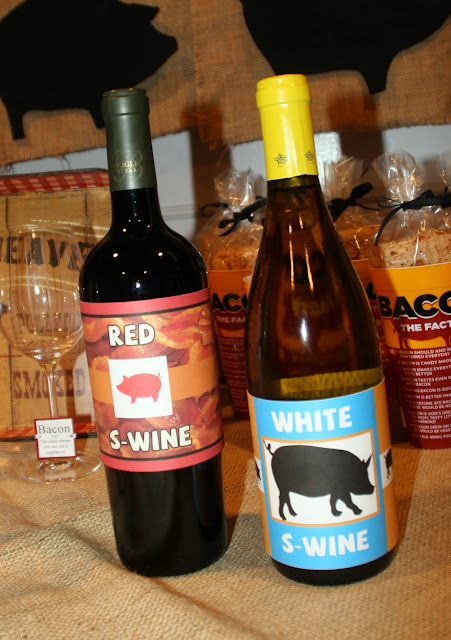 I ran out of time to create anything super creative for my wine labels, so I made them quickly.  The best I could come up with was red and white S-wine. 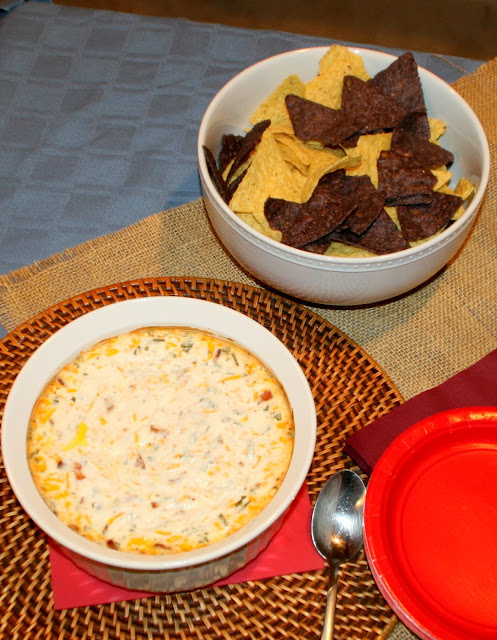 Menu:  I started with a couple appetizers.  The first was a Bacon Cheddar Dip with chips.  This recipe was AMAZING!  The only problem was that is was so delicious we kept eating and eating it!  We were all practically full on the appetizers before we even sat down for the rest of the meal.  Definitely make this dip for something though as it was delicious. 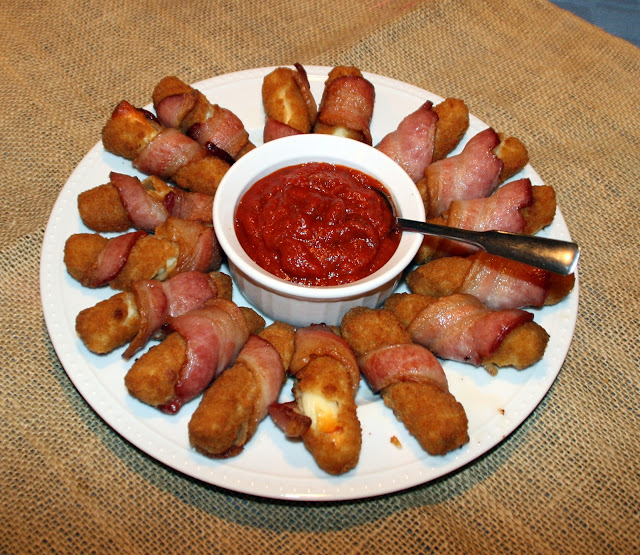 The second appetizer was mozzarella sticks that I wrapped a slice of bacon around. This was an experiment.  It was good, but I would recommend cooking the bacon a little bit before wrapping it and placing it in the oven.  I like my bacon a little more crispy than it turned out  just in the oven. 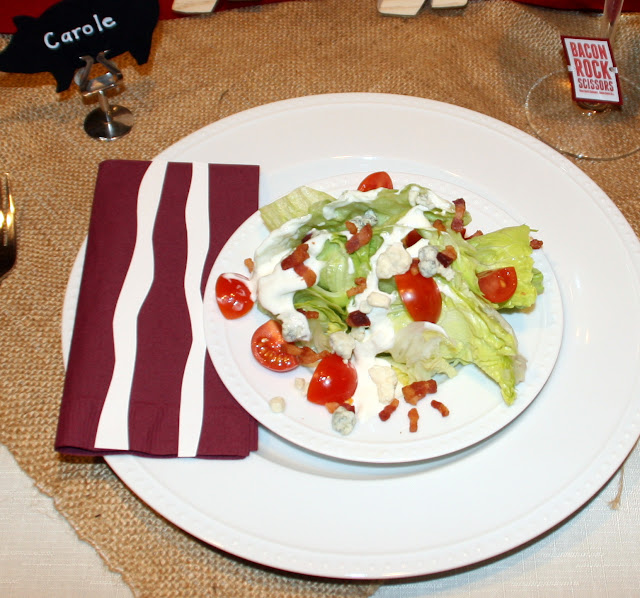 We started the meal with a wedge salad. I LOVE wedge salads, so I had to incorporate it into this meal. I made them small hoping it wouldn't be too filling. 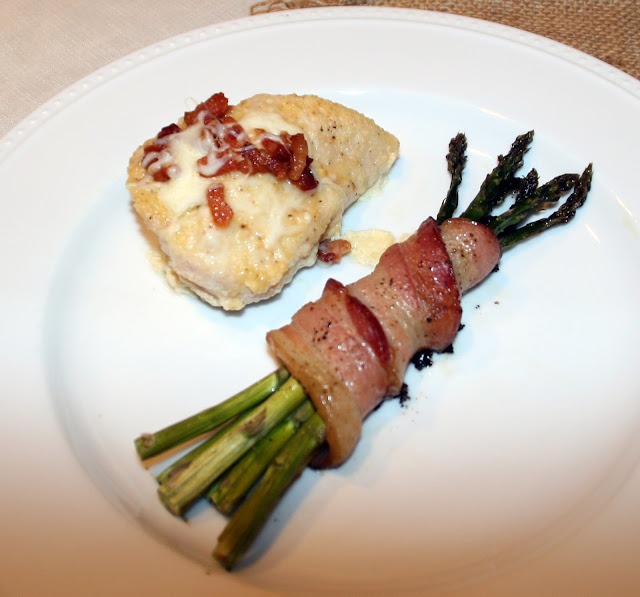 For the main dishes, I served a Parmesan Crusted Chicken with Bacon and asparagus wrapped in bacon.  I followed this recipe for the chicken in terms of ingredients, but I cooked the entire thing in the oven rather than first hot frying it, then oven, then broiler.  For the asparagus, I wrapped 5 stalks inside one thick piece of bacon and seasoned it.  It went into a 400 degree oven for about 20 minutes. 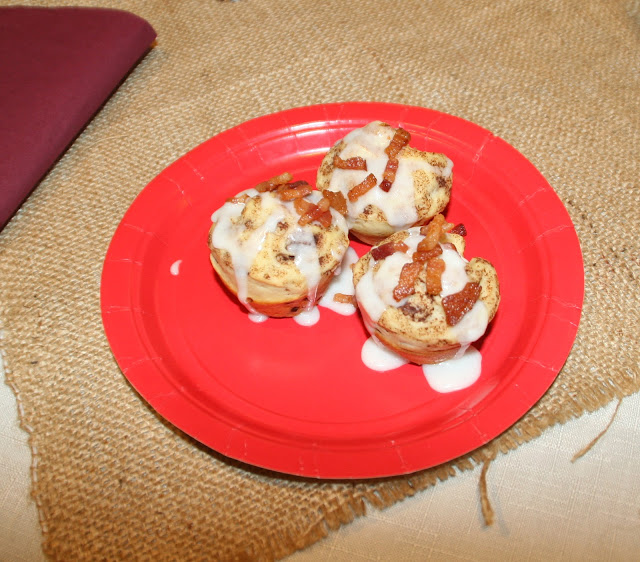 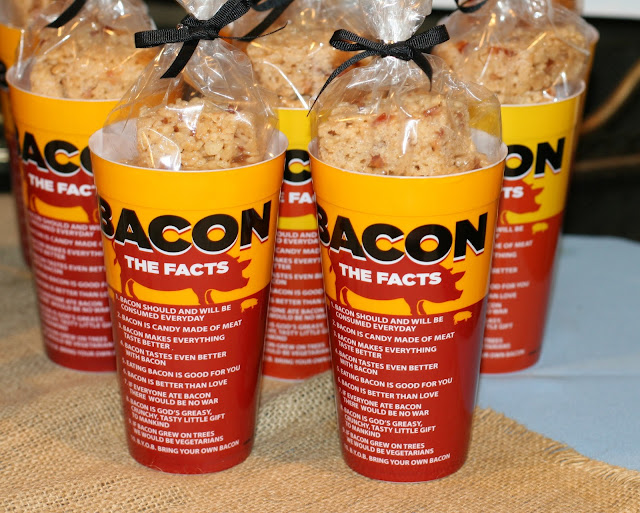 Favor:  As a take home gift, I found these silly Bacon cups at Party City.  I made Rice Krispie Treats with Bacon and included them inside. These were actually very tasty treats.


We had a very FILLING time, but it was FUN!

Posted by InviteandDelight at 3:20 PM