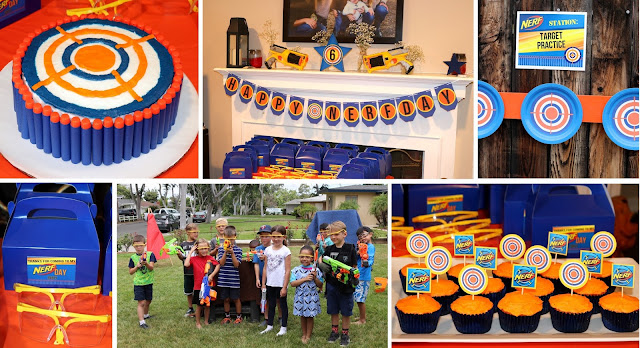 My son, like many young boys, LOVES his Nerf guns, so when his birthday was approaching and I asked him what kind of party he wanted, his immediate response was a Nerf gun battle.  He was so excited about it and eager to invite his friends to battle in the front yard.  This party was fun to plan, and even the adults got in on the birthday party fun! Invite: I created the invite on PhotoShop piecing together images I found online. I used these same images/colors throughout the party decor to create a uniform look. 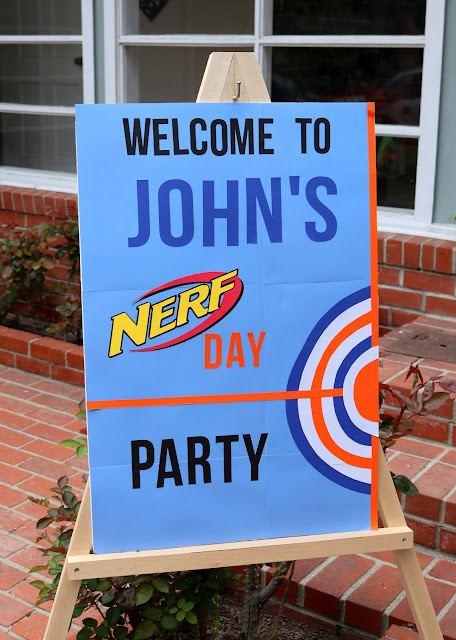 Entry Decor: I always like to have a sign welcoming guests to the party.  This is the one I created out of card stock for my son's party. I used my Cricut machine to cut the letters. 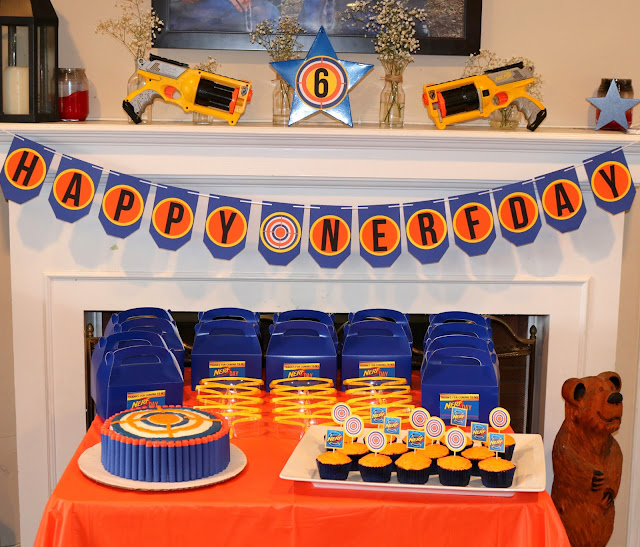 Decor:  I scrapbooked this Nerfday banner and added some of my son's guns to the mantle.  The star I already had for Memorial Day decor, I just added a target and 6 to it. I displayed the cake, cupcakes, and party favors on the table as well. 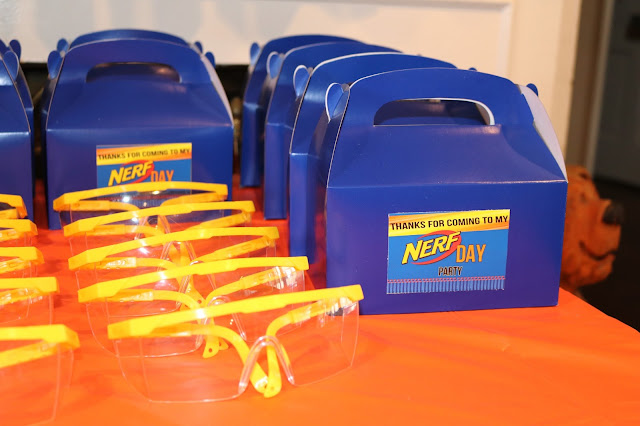 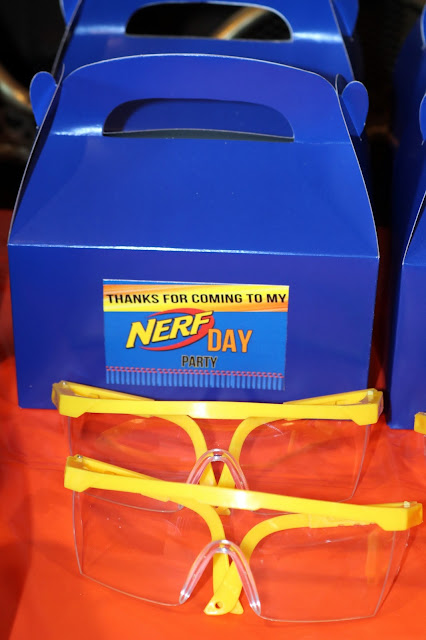 If you are going to have a battle with Nerf bullets, safety glasses are a must and these can get expensive.  Luckily, Oriental Trading Co came to the rescue with these construction glasses.  I was worried the kids might not wear them, but most of the kids kept them on for the battle as well as the party games. Score!  Oriental Trading Co also has these amazing favor boxes in any color and plenty of themes. I chose royal blue and then added a sticker I created to each box. 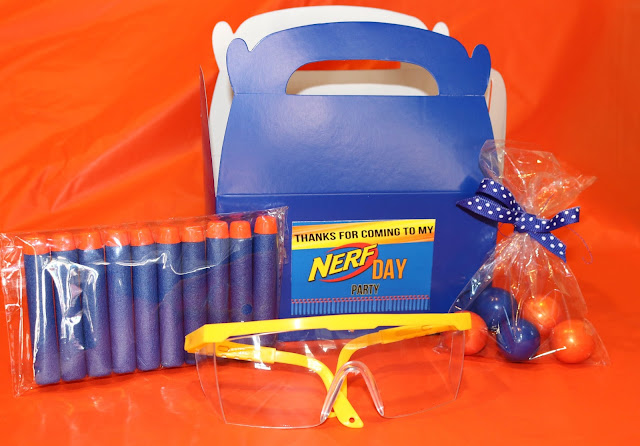 Inside each box, I had a package of 10 Nerf bullets. (I bought 400 bullets from Amazon for this entire party!)  I also had orange and blue gumballs per my son's request.  These gumballs from Oriental Trading are delicious, and they also come in a million colors.  I got one package of each color for the party favors, and I had plenty leftover.  They looked awesome AND they were super tasty. 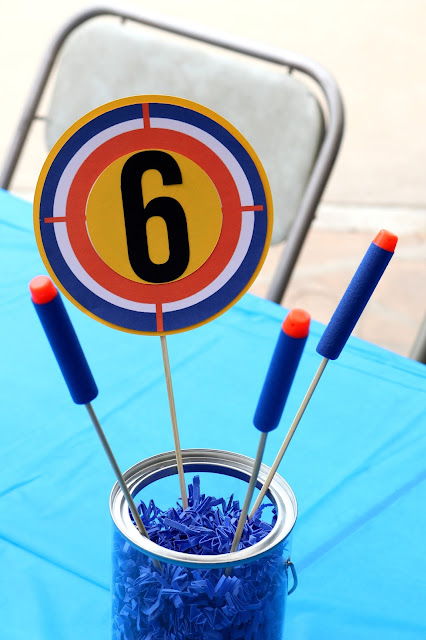 Most of the party itself took place in our backyard.  I made these simple centerpieces for the tables.  The paint buckets are also from Oriental Trading Co.  I had the paint buckets from my daughter's painting party (see the post here), so I recycled them & used them here too. I made the target with card stock and just placed a few bullets on the end of skewers. 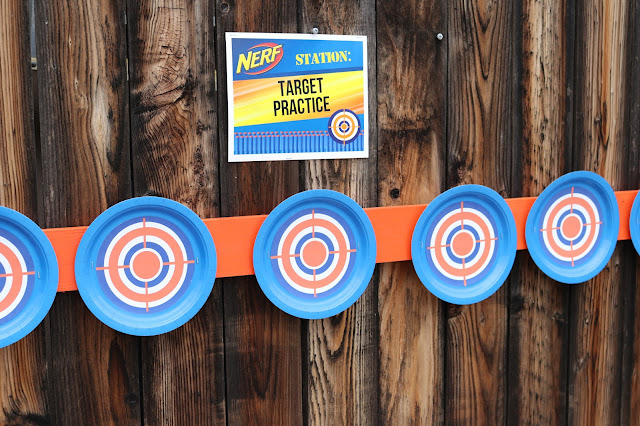 Party Games:  The kids arrived eager to shoot their Nerf guns, so I made sure we had plenty of things (not people...yet) for them to shoot. I made this Target Practice game.  I painted a 2x4 and my husband screwed it to the fence.  Then I glued targets on blue paper plates and attached them to the wood with a staple gun. 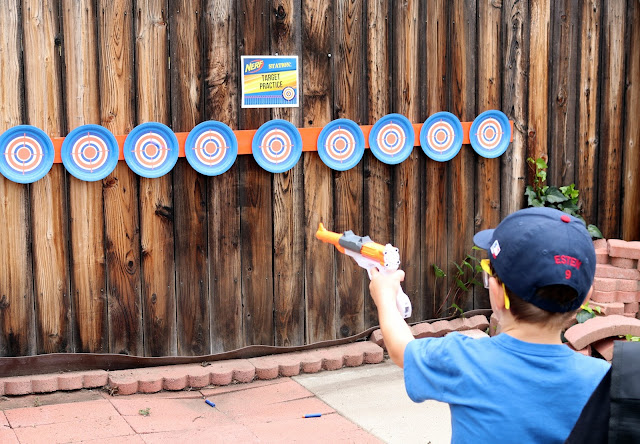 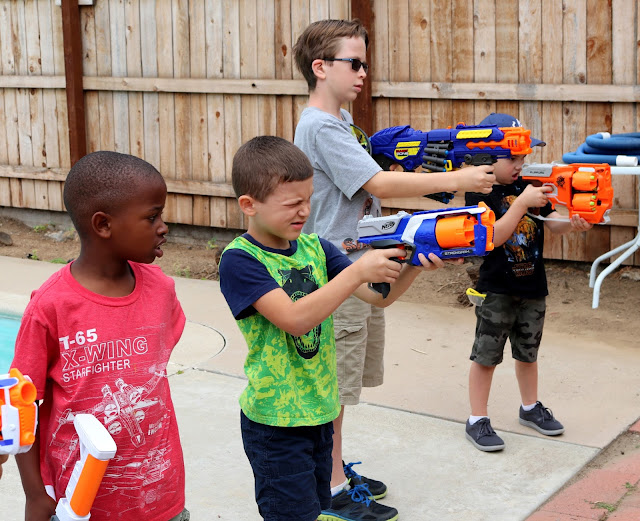 I made 10 total targets to enable multiple kids to shoot at one time.  The idea of having them take turns was too much work! I didn't keep score of hits or give prizes for any games.  It was just for the kids to have fun and test their skills. 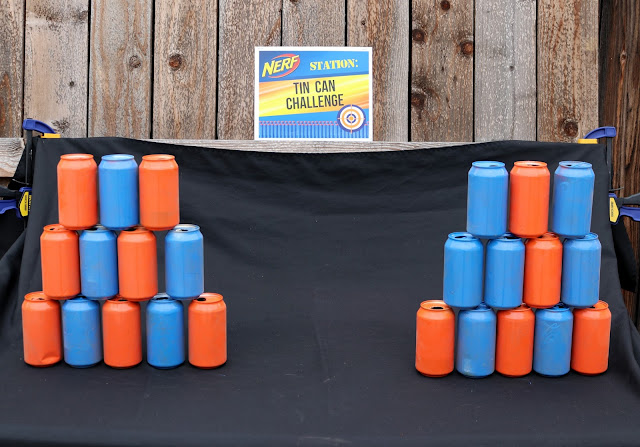 Another game was the Tin Can Challenge.  I saved old soda cans and then spray painted them in the party colors.  We rubbed them in dirt a bit after they were dry so they weren't sticky. 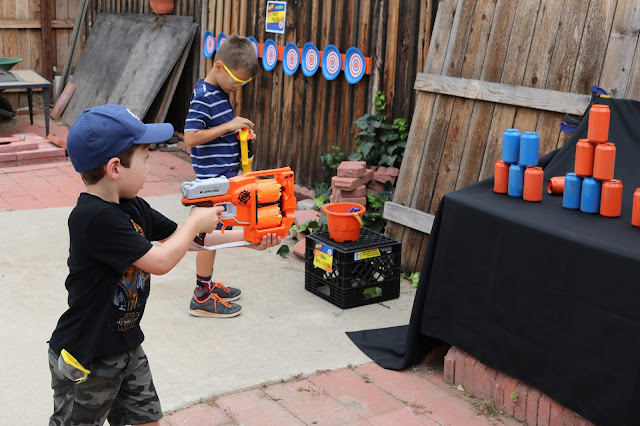 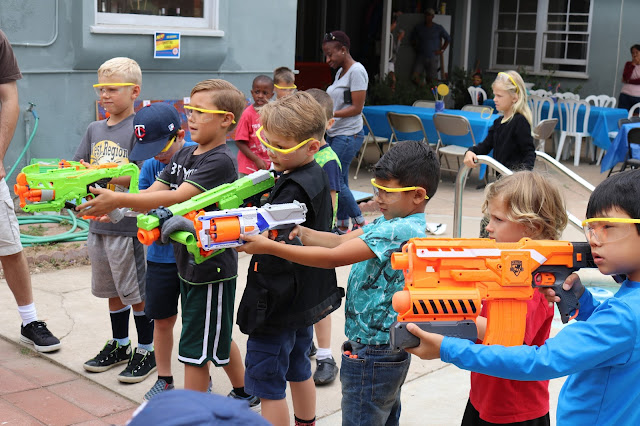 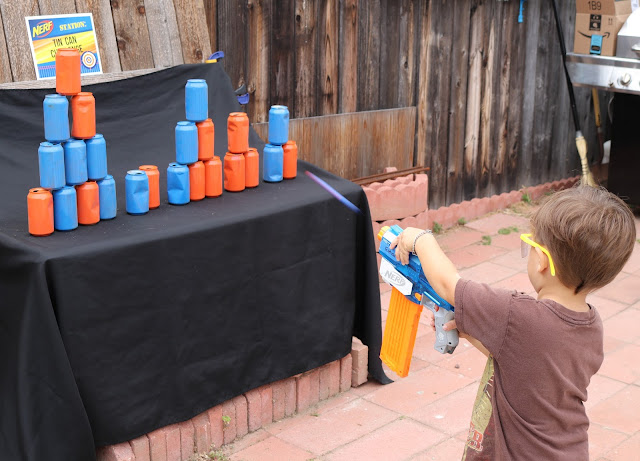 The kids loved the Tin Can Challenge! They liked stacking the cans in different ways for different challenges too. (Notice how almost all of them are wearing their safety goggles too!) 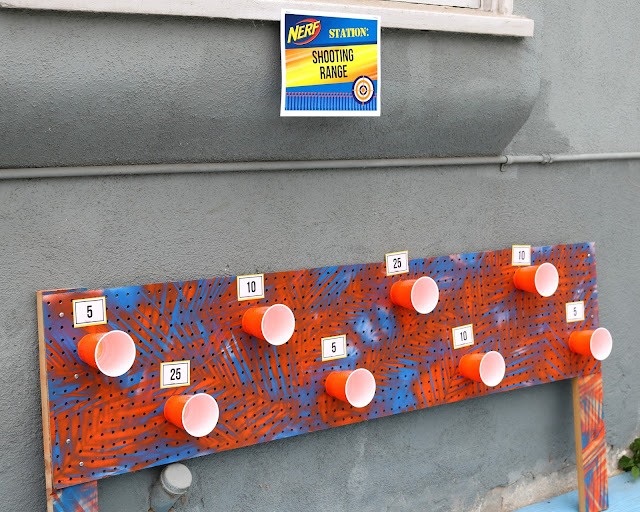 A third game was the Shooting Range.  My husband spray painted some wood to look camouflage (using leaves from our palm tree), and I glued cups and cards I made with points above each cup. 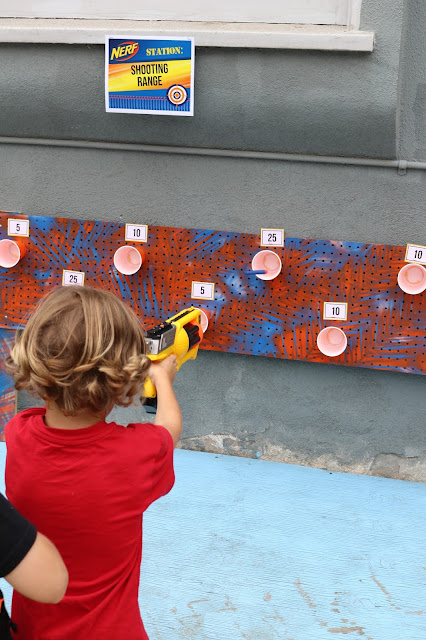 Love this photo where you can see my son's bullet going into the 25 point target! 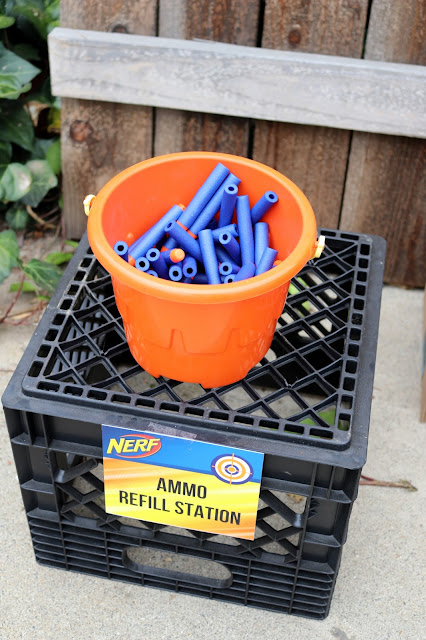 I set up a refill station next to all these games so the kids didn't have to worry about running out of bullets.  I moved these stations to the front yard when it was time for the giant Nerf battle. 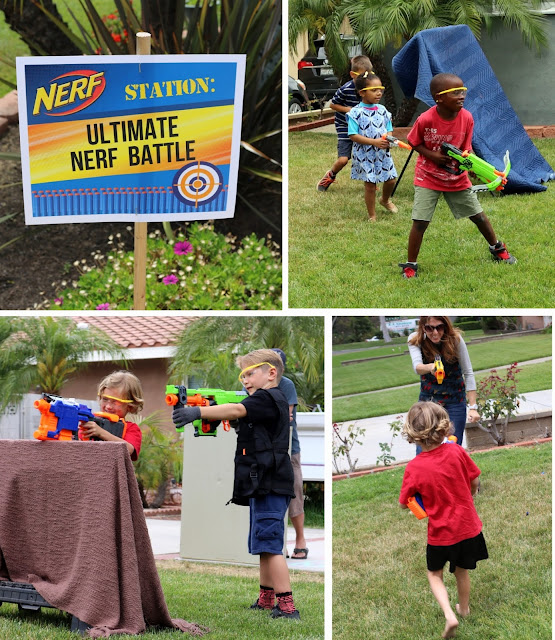 Speaking of Nerf battle...it was awesome!  We divided the kids into two teams to start, but really with 6 year olds, it was just a free for all.  If these were older kids, I would have put more effort into the barriers, but honestly, these kiddos did not care one bit.  My husband just set out his sawhorses and some other items we had in the garage and threw blankets over them...it was perfect.  Even I got in on the fun one round for a shot at the birthday boy! 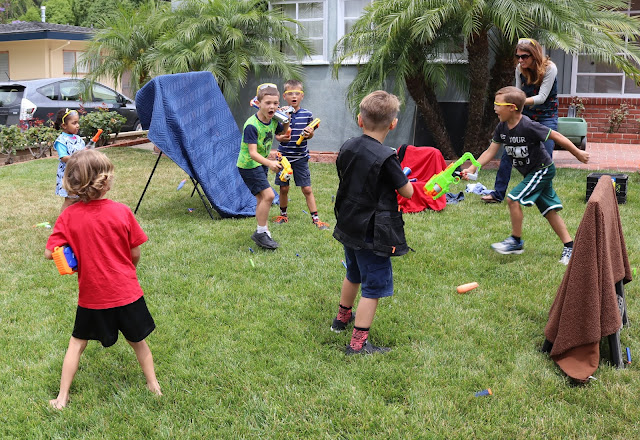 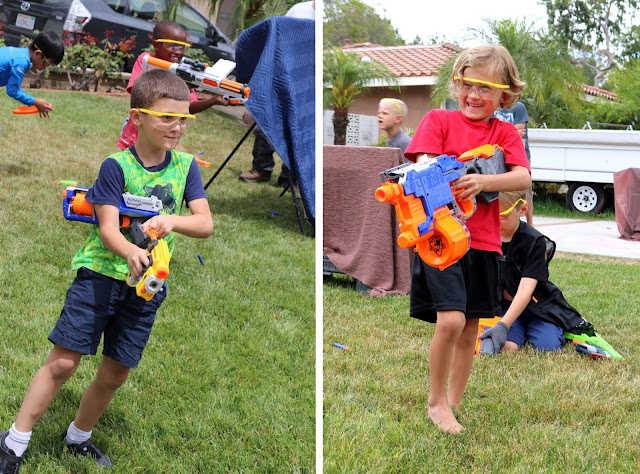 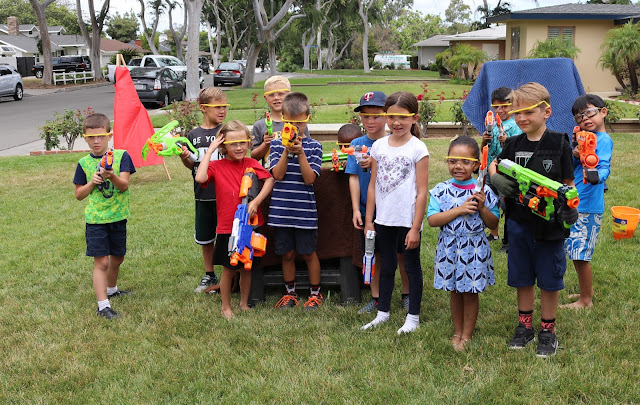 The kids had a good time, no one got hurt, and I even got a group photo at the end!  According to my son, "Mom, that was SO awesome!"  What more could you ask for?

Menu: My son wanted pizza, so I asked the local pizza place if they could place the pepperoni in the shape of a target.  In cooking, I think they moved a bit, but that's okay. I placed some darts in the middle just for effect. 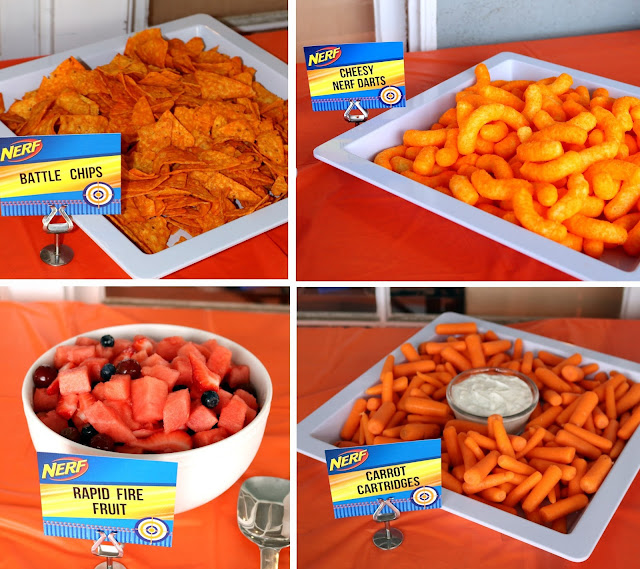 For the adults I made these battle greens (a yummy green salad).  This salad is delicious and perfect for summer. 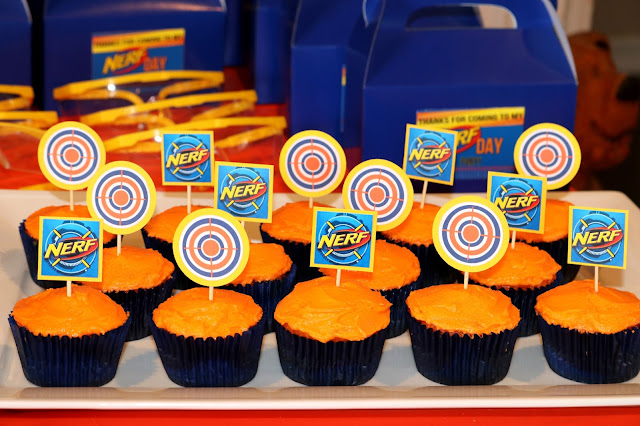 I kept the cupcakes simple - blue cupcake wrappers and orange frosting.  I made cupcake toppers with the same images that I used on the invite and throughout the party. 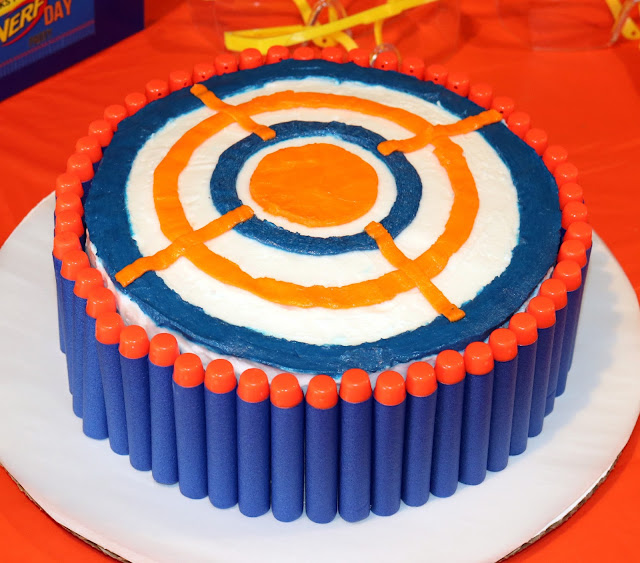 I made the cake a target to match all the other targets of the party and placed Nerf bullets around the edge. I am definitely not an expert at cake decorating, but I think it turned out pretty well. The inside of the cake was orange and blue.  I just divided a white cake mix into two bowls and added my two food coloring colors. Then placed the mix alternately into the cake pan for baking. 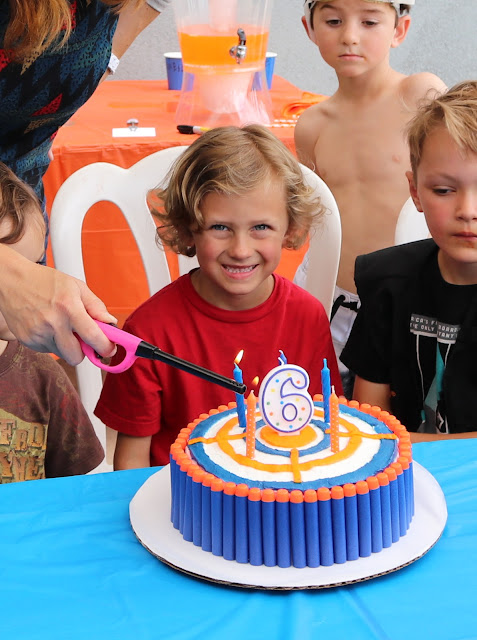 My son liked it and was all smiles! 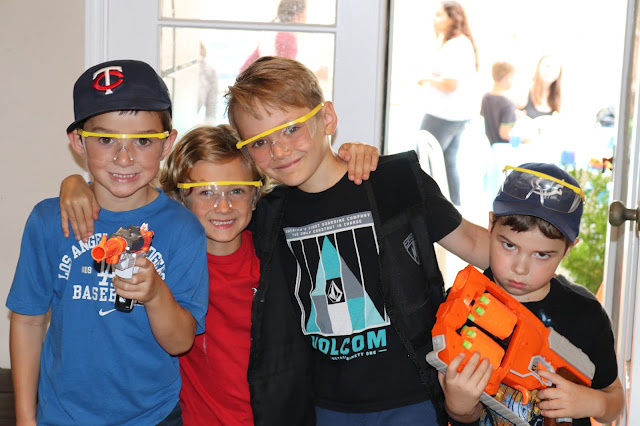 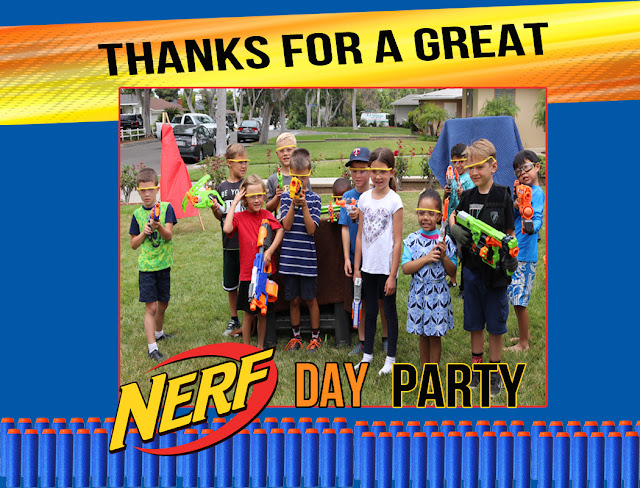 The above photo is what I created for my son's thank you cards.  This party was super fun for the kids.  The party activities kept them active, and they were cheaper than a bounce house or pinata. For me, that's a win! If your son or daughter is anxious for a Nerf party, definitely check out Oriental Trading Co for safety glass, favor boxes, and so much more.

Posted by InviteandDelight at 7:37 AM

This looks like it was a BLAST! How fun! As always, I love all your adorable themed food! You're so clever! He looks like he had the time of his life! Well done my friend!