I am late in writing this post, but I hit the big 4-0 at the end of this month--the first of 5 close girlfriends from high school who will become 40 this year.  I decided to theme our August monthly dinner "Almost Forty & Fabulous" to have fun with this milestone.  When I think fabulous 40s, I think Carrie Bradshaw and her group of friends from Sex and the City, so this became the inspiration for the decor and food. 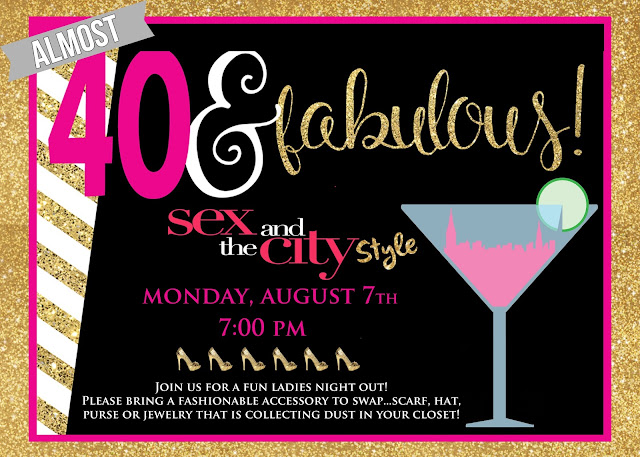 Invite:  I designed the invitation on Photoshop.  The fonts I used were Trojan Pro and Olivier.  For added fun at the dinner, I asked the ladies to bring a fashionable accessory that they don't use/want anymore. My friends brought jewelry, purses, or hats that we exchanged at the end of the night. 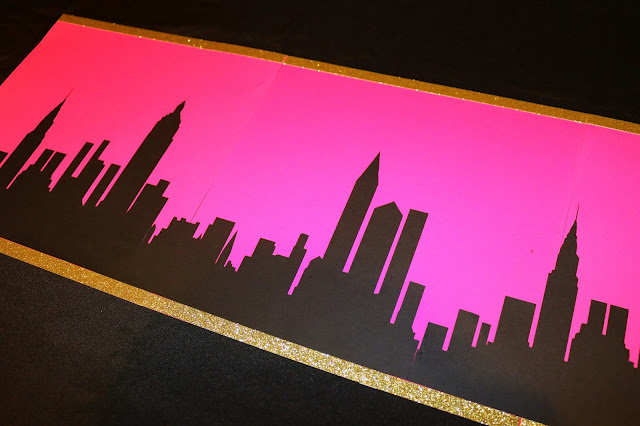 Decor:  Black, pink, and glittery gold was the palette of colors I went with -- sophisticated, yet flashy -- just like the Sex and the City ladies.  I adorned the center of my table with a table runner I made out of card stock.  I used my Cricut cutting machine to create a Manhattan skyline and glued it to pink paper with an added glitter border. 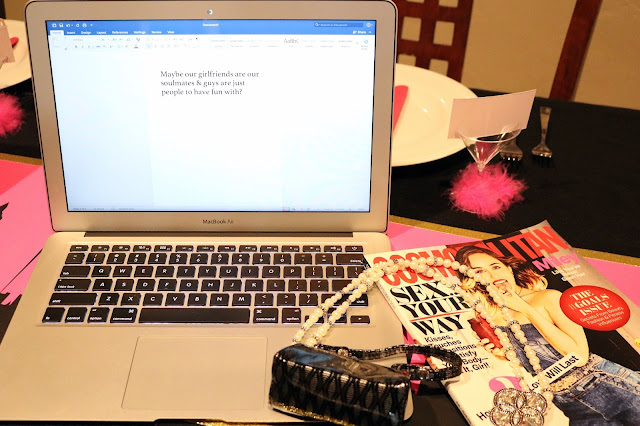 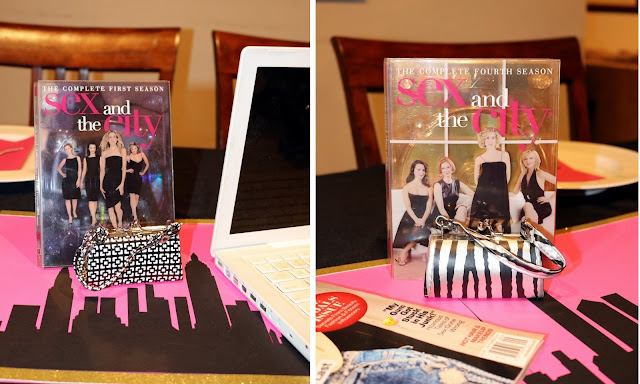 For the centerpiece, I placed a laptop computer with a simple quote about friendship from Sex and the City to represent Carrie Bradshaw and her job as a column writer.  I also set out a Cosmopolitan magazine, a pearl necklace, and mini purses as these are items the Sex and the City ladies love. 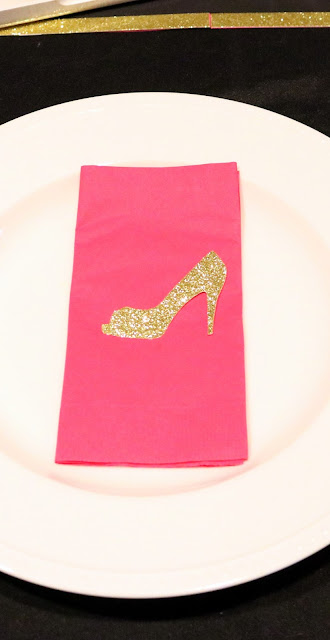 I cut out glittery high heels to place on pink napkins.  Shoes are one of the girls (especially Carrie's) addictions on the show, so I wanted to make them as snazzy as possible. 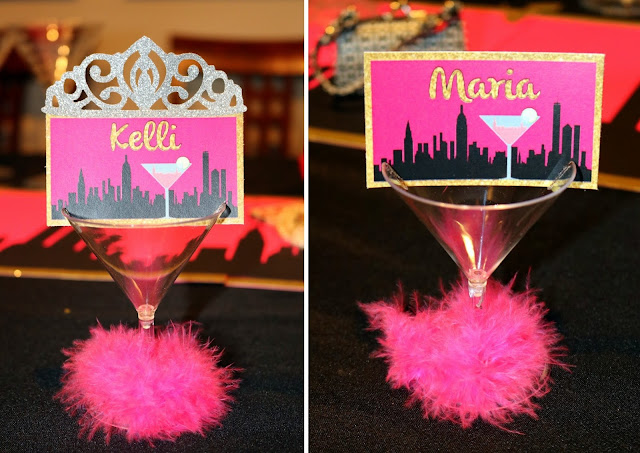 The Sex and the City girls are all about martinis, so I had to add those to my decor.  I found mini plastic martini glasses at Party City, and sawed a slit in the top to be able to hold a business card size piece of card stock.  I trimmed the bottom of the glass with part of pink boa and created a card to match my invitations with each guest's name on it.  For those of the guests that will be turning 40 this year, I also added a silver glitter tiara to the top of their card. 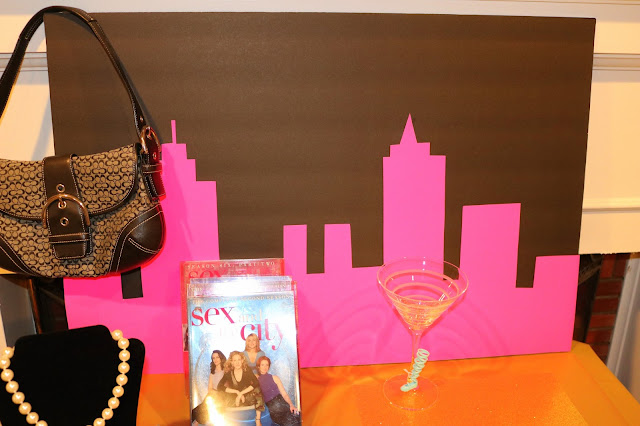 On the beverage table, I created a simple backdrop with foam board and bright pink poster paper to look again like the New York skyline. 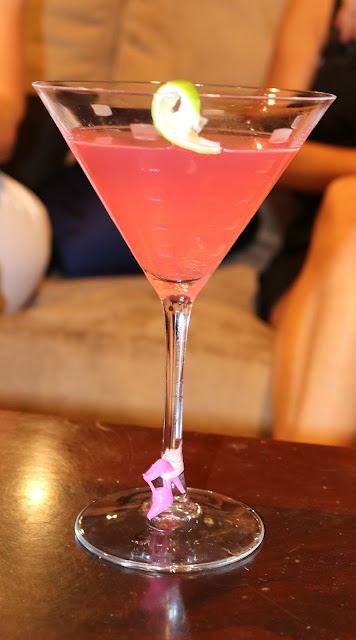 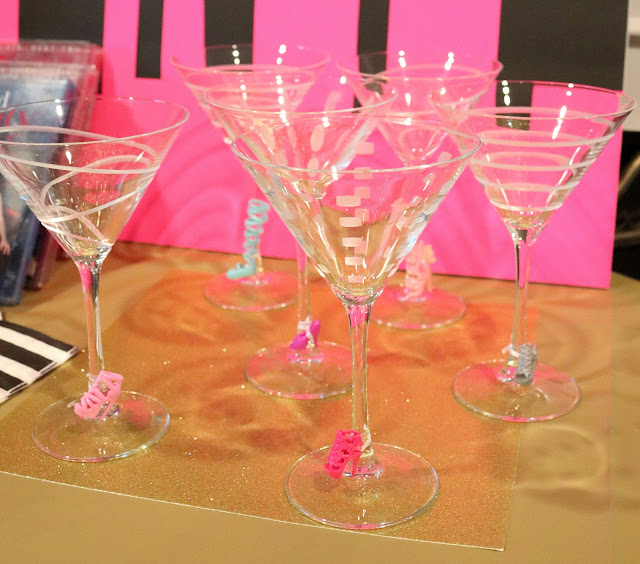 Cosmopolitan martinis are essential to serve at a Sex and the City party, so of course I served these at our dinner.  For martini glass charms I borrowed Barbie doll high heels from my daughter and tied one around the stem of each glass with ribbon.  Simple and easy, but perfect for the theme. 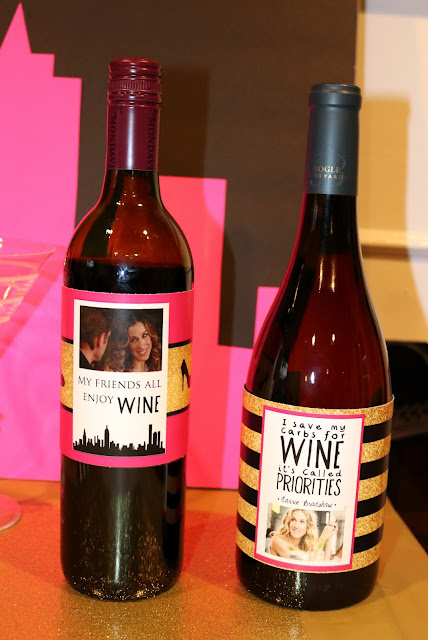 I always serve wine at my monthly dinners, so I made Sex and the City themed wine bottle labels to serve for those that preferred wine instead of a martini.  I found quotes and a photo from episodes where wine is mentioned in the series and patterned a label around those. 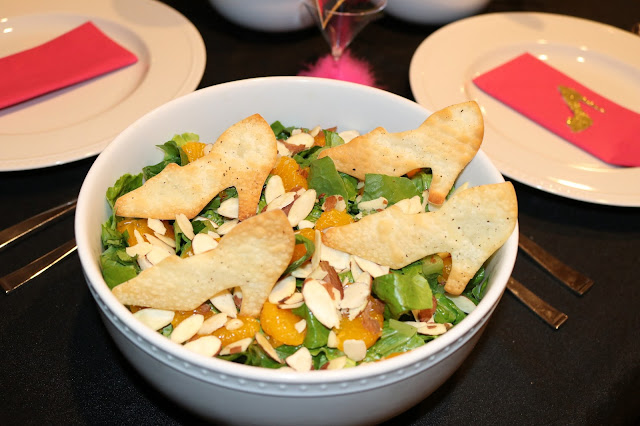 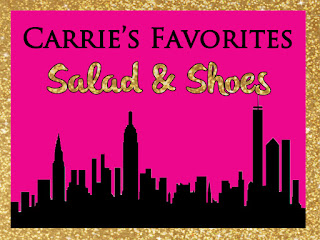 Menu: I designed my menu around each of the four main characters on the show.  The characters typically meet for brunch or lunch, and Carrie often orders salads.  With this in mind, we started the evening with a simple salad - romaine lettuce, slivered almonds, mandarin oranges, and a dressing from Trader Joe's called Sesame Soy Ginger Vinaigrette.  I bought a high heel shoe cookie cutter and used it to cut wontons in the shape of high heels. I baked them and then added them to the top of the salad for fun. 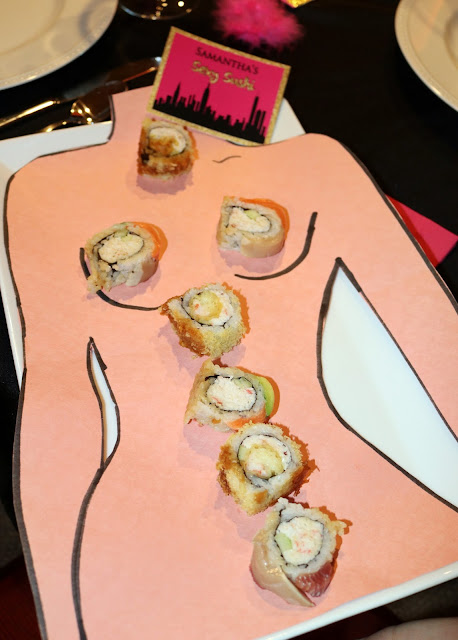 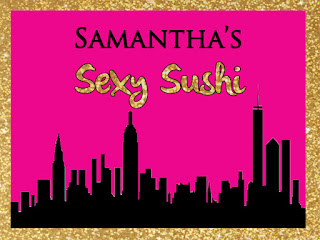 Next, I served sushi that I ordered from a local restaurant.  You may or may not remember the Sex and the City episode where Samantha decides to she going to make her own sushi and then surprise her boyfriend by laying naked on the table and placing the sushi on her body. To represent this episode, I cut out a female body from construction paper to place on my platter and lined the "body" with sushi to represent this episode.  When I brought the platter out, it was an instant conversation piece and those girls that were familiar with Sex and the City definitely got it. 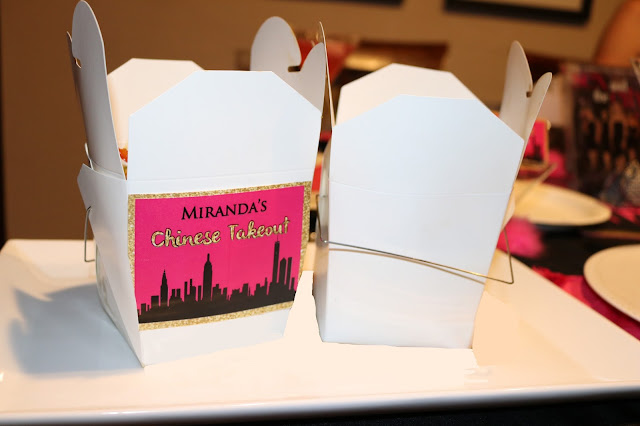 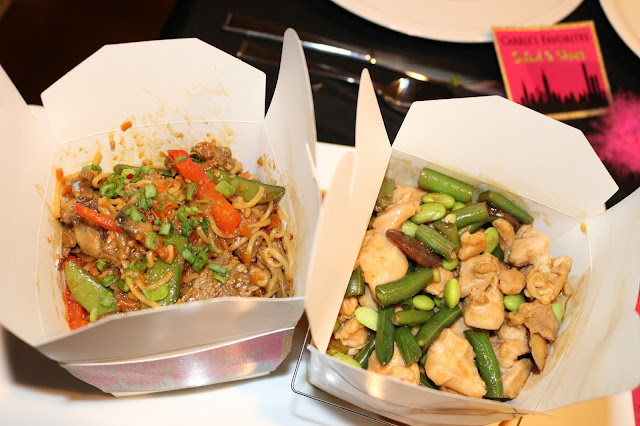 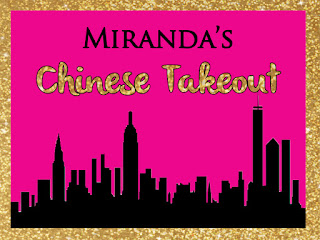 Our main dish was in honor of Miranda who always orders Chinese take-out on the show.  The restaurant even knows her order when she calls.  I made the dish on the left which was called Garlic Beef and Veggie Ramen.  The dish on the right was a frozen meal from Trader Joe's.  Both were amazing!  The Trader Joe's dish is called Shiitake Mushroom Chicken.  I also served fried rice from Trader Joe's.  I served the two dishes in Chinese to-go boxes I purchased at Michaels to match Miranda's take-out concept. 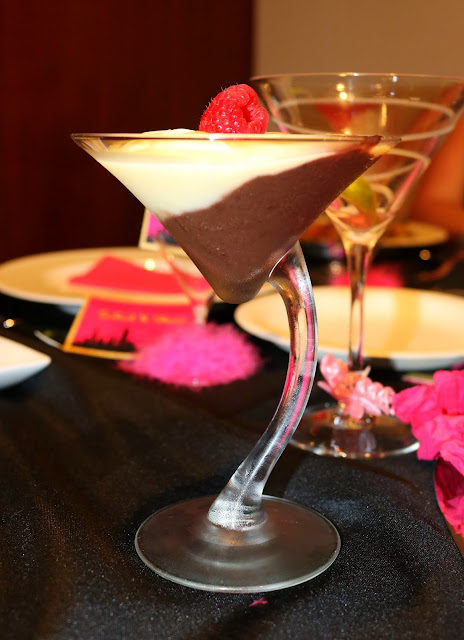 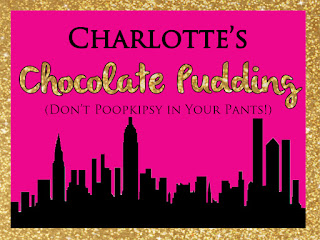 For dessert, I served chocolate and vanilla pudding.  In the Sex and the City movie when the girls go to Mexico on Carrie's "honeymoon, Charlotte is terrified of eating the food/drinking the water, so she brings pudding cups to eat at every meal!  She wants to avoid diarrhea, or as she calls it, "poopkipsying" in her pants.  I served our dessert in a martini glass, and tried to make it sophisticated by placing the pudding in a diagonal and adding a raspberry on top.  Simple, but yummy. 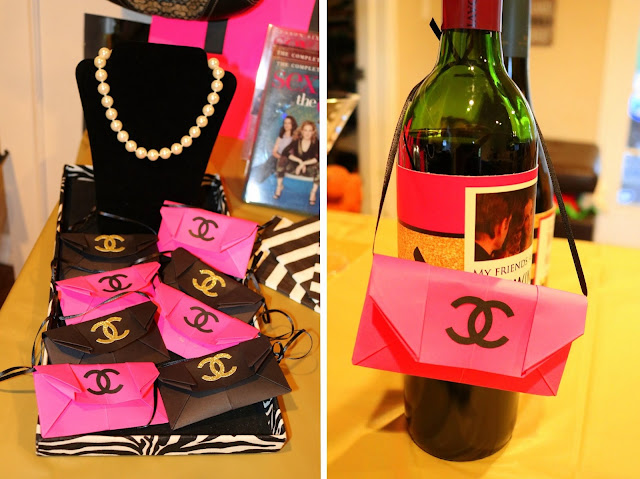 Favor:  As a party favor for guests, I made origami pink and black Chanel purses.  I used card stock which is not super easy to fold nicely, but I was trying to avoid spending more money to purchase origami paper.  Ribbon was used for the handle and I placed velcro on the inside to hold the purse closed. 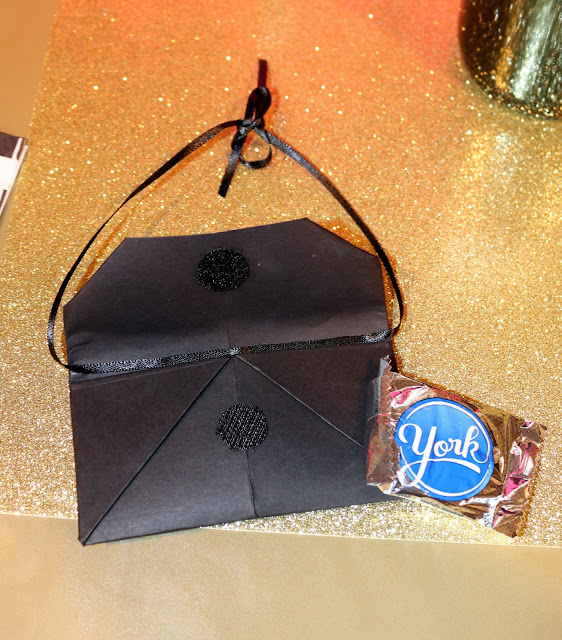 Inside the purse was a York Peppermint Patty.  I thought of these to pull in the New York theme, but I think the purse would also have been cute with the chocolate gold coins.

It was a fun night as we celebrated becoming Forty and Fabulous Sex and the City style!

Posted by InviteandDelight at 6:35 PM

I loved this theme! So much fun! Even though I don't eat sushi, that was one of my favorite things! Such awesome presentation! And I loved the detail of the high heel wonton chip on the salad! Such a fun night! I have a few more months till my 40th! This was a great way to celebrate it with my favorite girls!