A League of Their Own Party 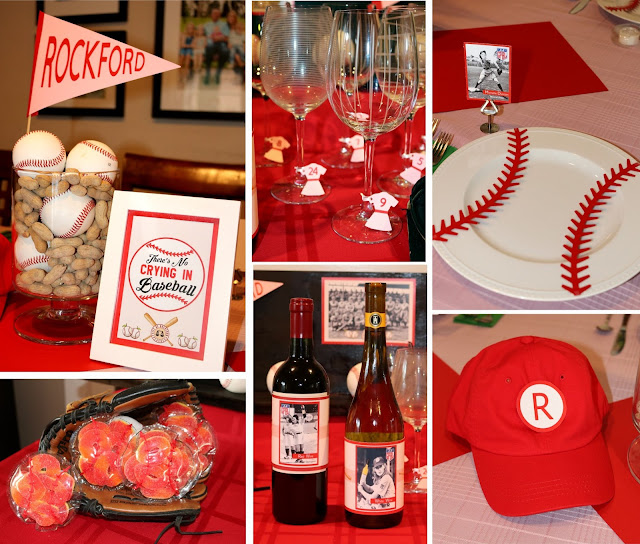 My last monthly dinner was a League of Their Own theme, and it was a ton of fun! It is such a fun movie and a super easy theme to pull off.  Play the movie in the background during a girls night dinner or just use some of these ideas for a future baseball theme party.  I had fun creating the details for this party especially the place cards, wine decor, and favors. 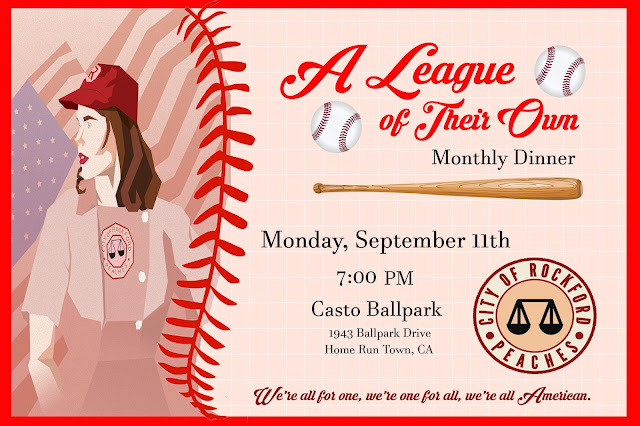 Invite:  Just like the movie, I centered my party around the Rockford Peaches team. I created the invite on PhotoShop in pink and red like the uniforms of the players adding their logo and some other baseball graphics. 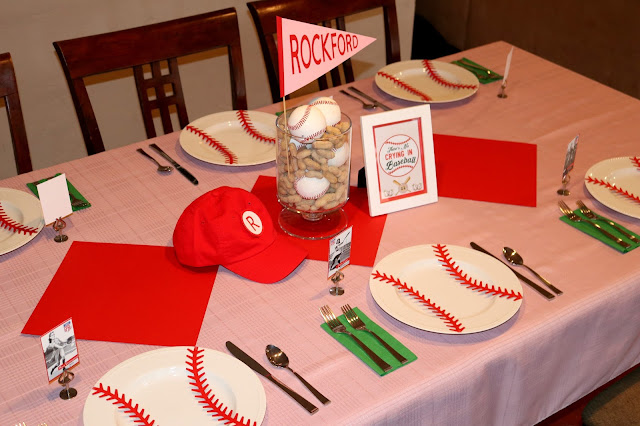 Decor:  Baseball decor is always easy to throw together, but I wanted to add some specific League of Their Own items as well.  I used a pink tablecloth and set out red card stock to create diamonds as a table runner. 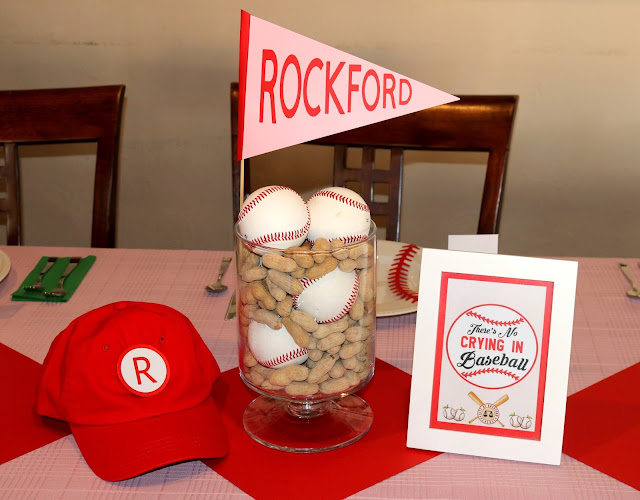 My centerpiece was a vase filled with baseballs and peanuts.  I added a Rockford Peaches pennant that I made out of card stock and a skewer.  Alongside the vase, I created a sign to highlight one of the most well-known quotes from the film, Jimmy Dougan's "There's No Crying in Baseball!" 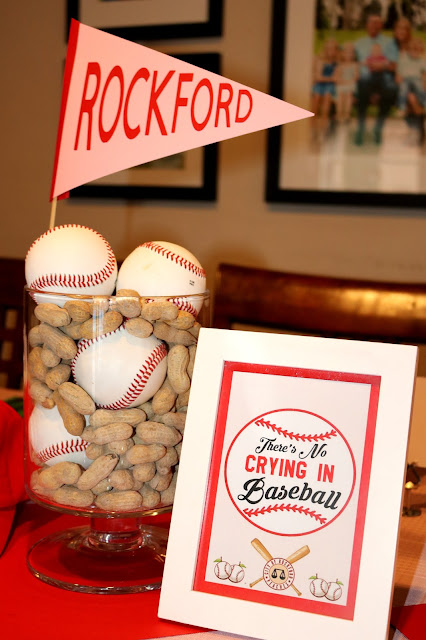 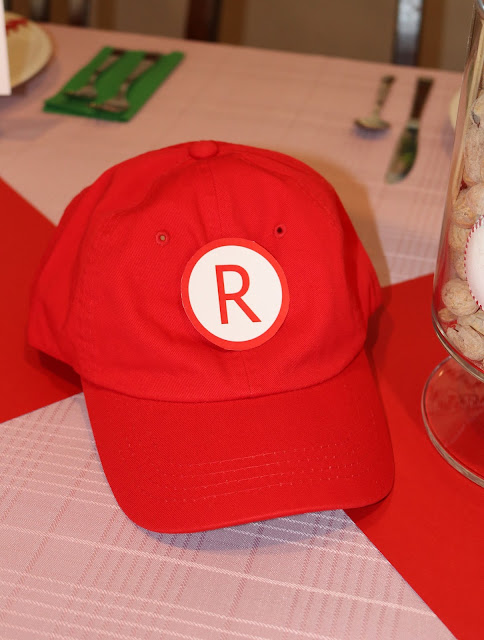 I purchased a plain red baseball cap for $5 on Amazon, and printed the Rockford Peach "R" logo to place on it. I didn't want to ruin the hat, so I didn't glue it, but just dented the hat a little and set it on there.  Worked perfectly. 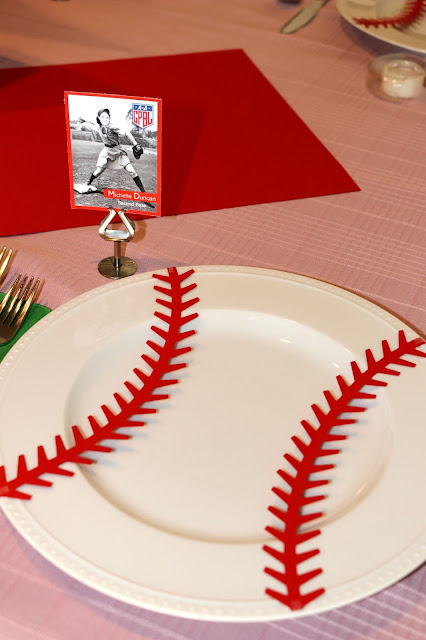 I used my Cricut cutting machine to cut out baseball stitching to fit my plates.  To help them stay affixed to the plate until serving time, I used small pieces of scotch tape. 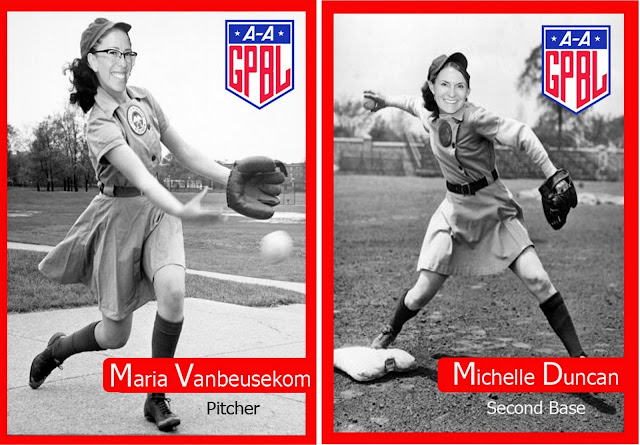 For place cards, I made a baseball card for each guest. I found images of the real Rockford Peaches online, and then used Photoshop to swap out the Peach's face with the face of my guest.  These were hilarious, and some really looked like they matched up perfectly! I created the design surrounding the photo to look like the originals with the GPBL logo, each guest's name, and a baseball position. 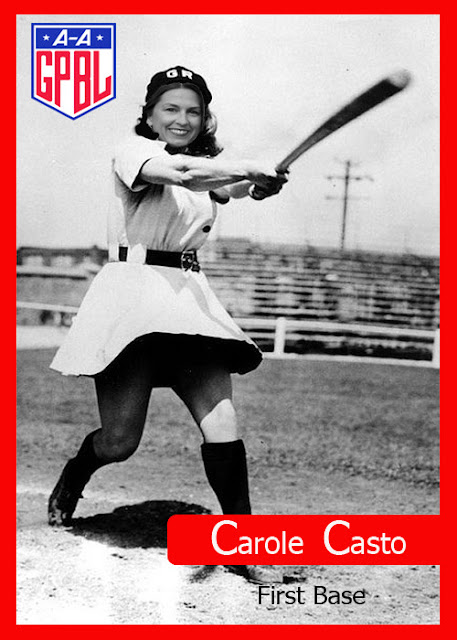 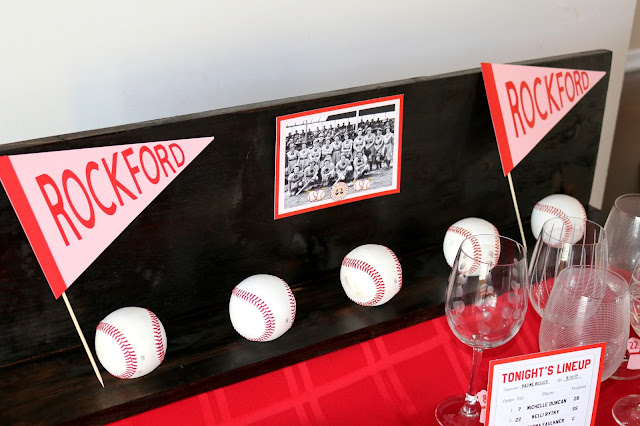 My husband and I recently finished making a baseball shelf for my son's bedroom (a shelf with baseballs below it to hang hats on), and since we hadn't put it up in his room yet, I decided to use it in my decor.  I turned it over and set some more Rockford Peach pennants I made on it.  I also printed a copy of the original Rockford Peaches to place in the middle. 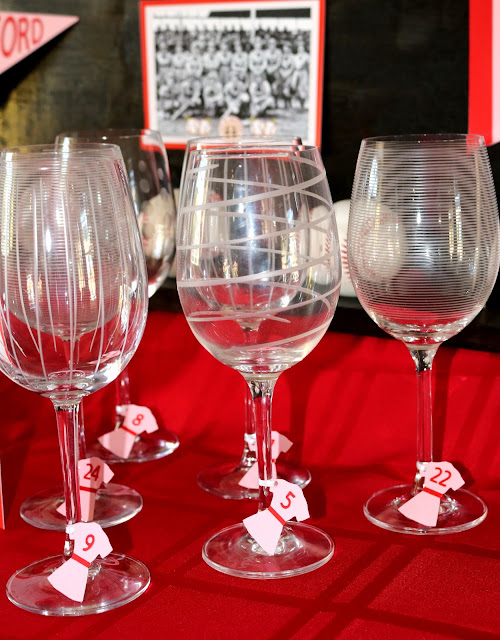 One of my favorite touches for the party I came up with was the wine charms and Line Up card.  I cut Rockford Peach uniforms out of card stock to create wine charms. I used PhotoShop to design a baseball line up to assign my guest's a uniform number.  This number became their wine glass for the evening. 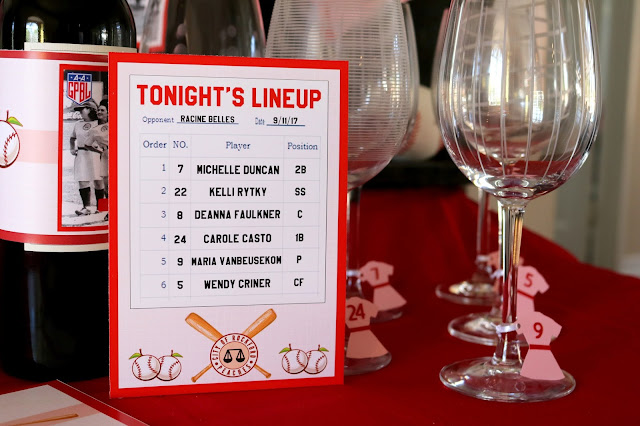 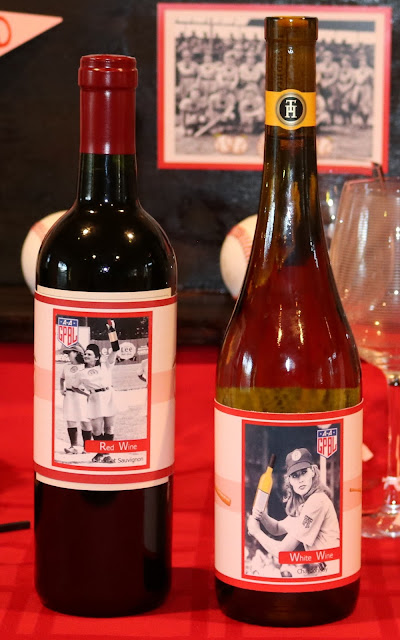 I always have fun designing wine labels to go with my themes, and this party was no exception.  I matched the baseball card design I created for the place cards, and created wine labels with baseball cards.  I swapped out Geena Davis' baseball bat for a white wine bottle in one, and Madonna's wave became a raising of a red wine bottle in the other! Makes you chuckle, right? 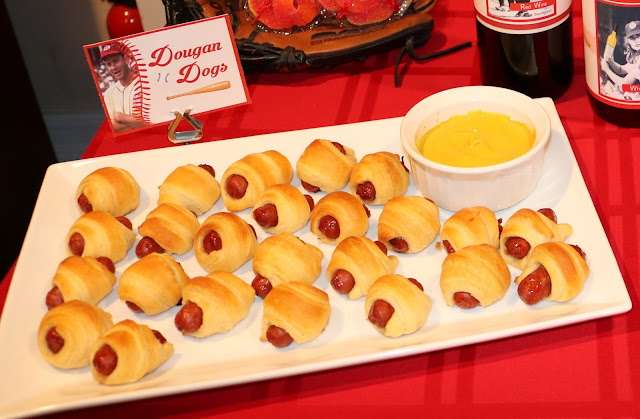 Menu:  It would be easy to serve hot dogs for any baseball theme, but since this wasn't a kid party, so I didn't want them to be my main dish.  We started with an appetizer of mini pigs in a blanket that I called "Dougan Dogs" after the Rockford Peaches' coach Jimmy Dougan.  I created menu cards in the same design as the invitation.

For the main dish, I served "Betty Spaghetti" with a Vodka ("Hooch") Sauce after Marla Hooch and Betty "Spaghetti" Horn from the film. 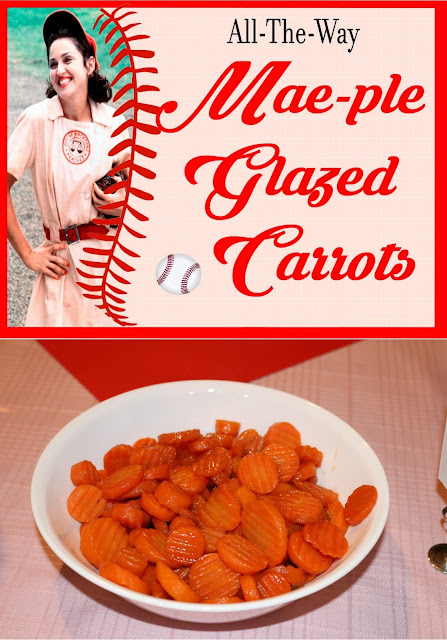 Along with the spaghetti, I served "Mae"-ple Glazed Carrots after Madonna's character "All the Way Mae." 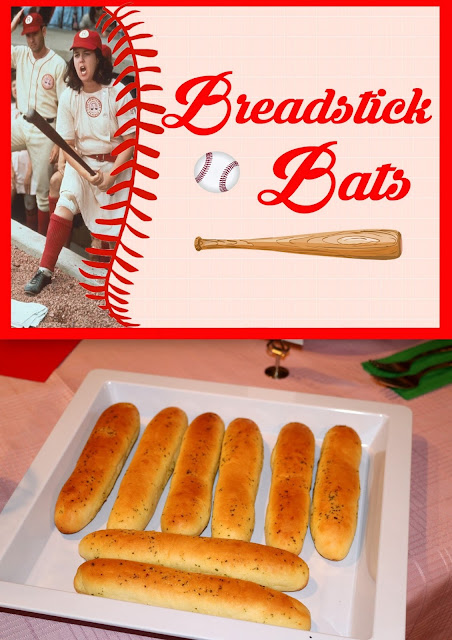 Store-bought breadsticks became baseball bats to go with the spaghetti. 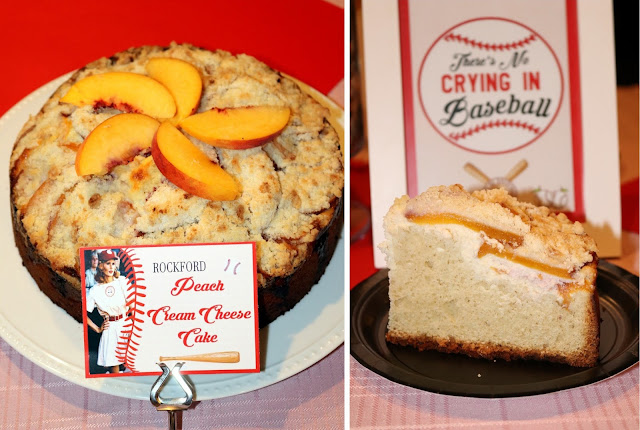 To represent the Rockford Peaches as a team, I served a Peach Cream Cheese cake.  You could easily do a cobbler or peach jello, but this dessert wasn't too hard to make. 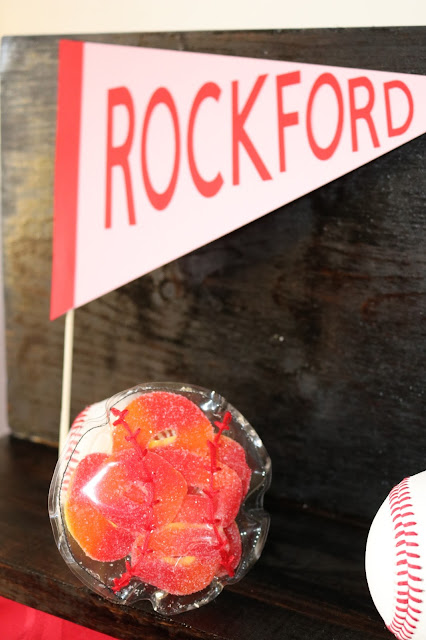 Favor:  As a take-home gift, I gave each guest Peach Ring candies.  I made clear baseball pouches to put them in.  To make the pouches, I cut circles out of a clear plastic table cloth (you could probably use thick sheet protectors although I haven't tried it with those). Then I hand sewed the red baseball laces on using embroidery thread.  This did take some time to sew all them.  Once I was done with the red, the black around the edge was stitched with a sewing machine leaving a small hole big enough to stick the peach rings through. My mom helped me get the black sewn and then hand-stitched closed once the peach rings were inside. (Thanks Mom!) 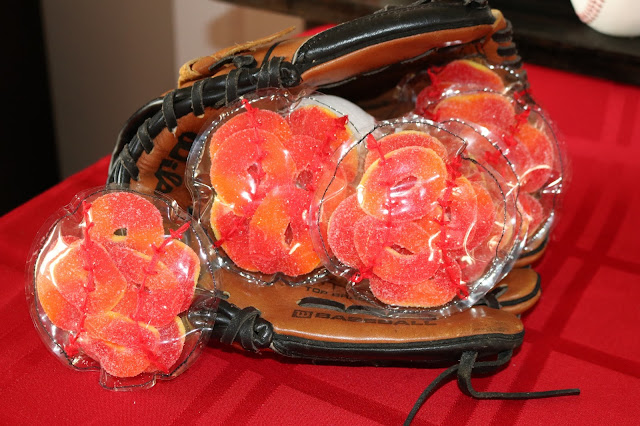 This photo shows how I displayed them.  It was a bit hard to see the stitching with the reddish/peach candy, but peach went with my theme, so I did it anyway.  I think these would be really cute with white mints in there.  Then the lacing would really pop. 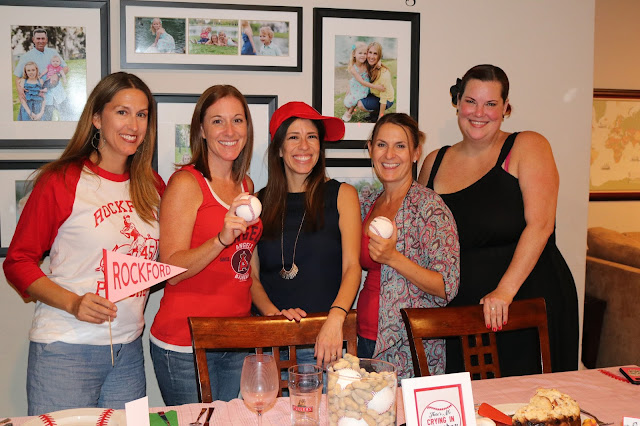 Only half of our normally monthly dinner "team" could make it, but we had a fun evening. Oh...and check out my Rockford Peaches shirt!  I ordered it off Amazon because it went with the theme, but I also just think it's a cool shirt I'll wear often.

Posted by InviteandDelight at 7:00 AM

Loved this theme! The place cards were hilarious! And the wine charms, adorable! The favors, omg...you outdid yourself girl! So cute! Good was super yummy! I mean, who doesn't love a good pig in a blanket?!! Awesome as always!