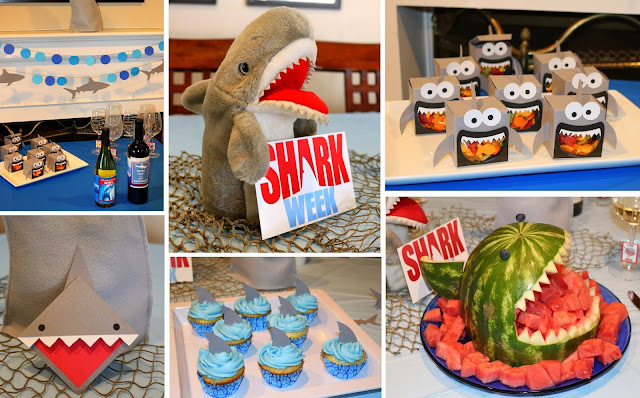 Shark Week (at the end of July) is such a popular week on Discovery Channel, and I knew it would make a fun theme for a monthly dinner.  I had a lot of fun carving sharks out of food and coming up with ideas for this party. 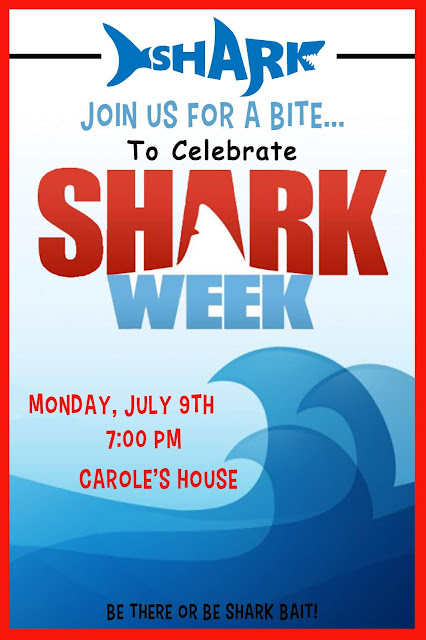 Invite:  I stuck to the basics with the invitation. I stayed away from actual sharks as I didn't want a scary "real-looking" shark on it or a cartoon one.  Blues, white, and red was the color scheme I went with for this party and invitation. 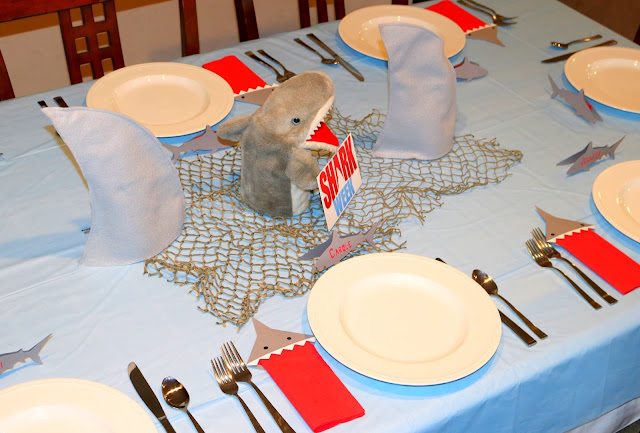 Decorations:  The table was simple with a blue plastic tablecloth, an easy centerpiece, and handmade scrapbook paper decor. 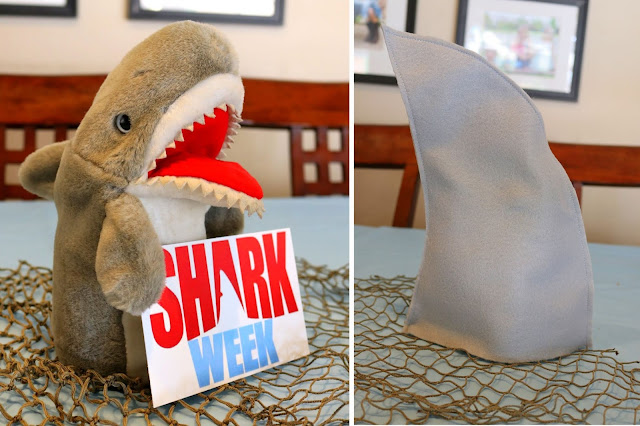 For the centerpiece, I purchased a net from Michaels.  (FYI - the net was $7 (pre-coupon) for that little piece!)  My kids already had the shark puppet that I put around a candle.  The fins are just two pieces of grey felt sewn together and set over an empty vase. 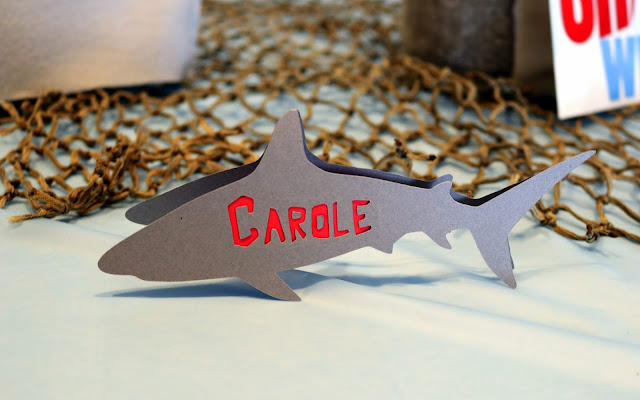 The placecards I made with my Cricut.  I found a shark silhouette image and added each girl's name to the center.  I welded two of the sharks together and then put a scrap of red paper in between them before gluing. 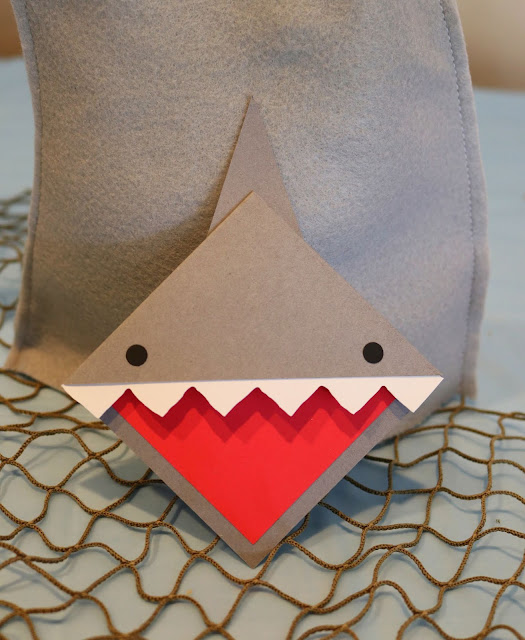 I love my shark bookmarks that I used for my napkins. I made them a bit larger than I normally would for a bookmark so that they would be big enough to fit a red napkin in the mouth. 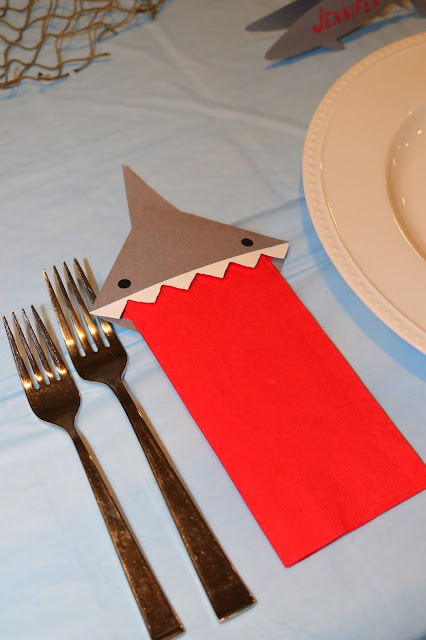 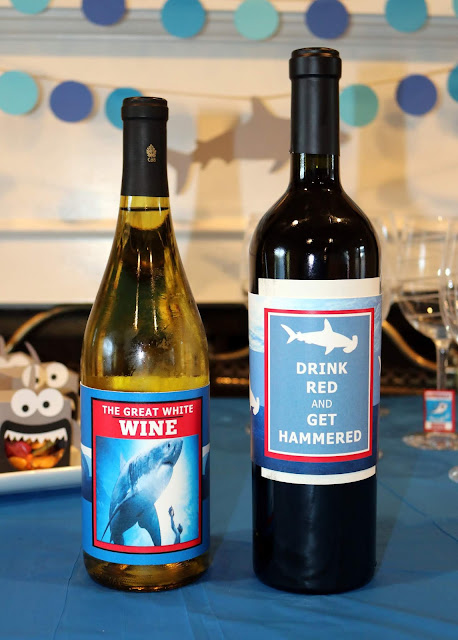 I made wine labels to play with the theme.  The Great WHITE shark for my white wine, and the hammerhead shark "Drink Red and Get Hammered" for the red. 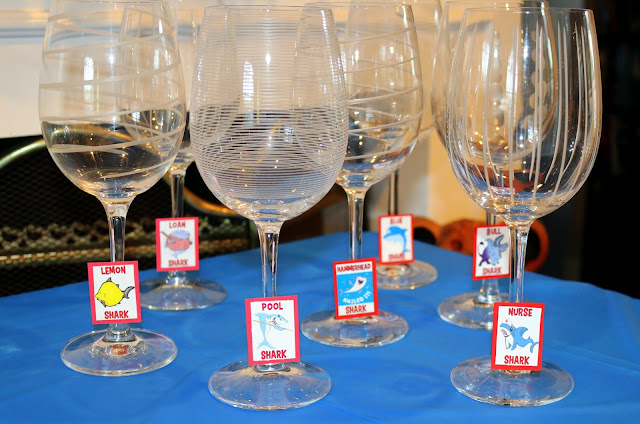 I made some silly wine charms playing off names of types of sharks -- nurse shark, pool shark, loan shark, etc. 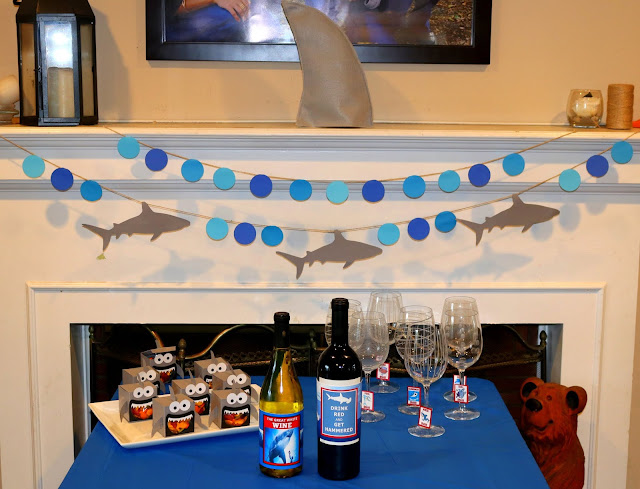 My daughter helped me make this simple shark banner. I cut the pieces with my Cricut and my daughter glued them onto the twine. 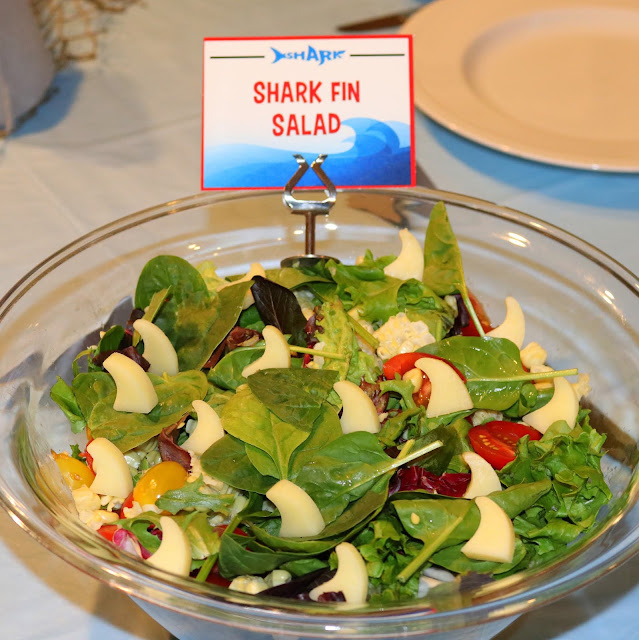 Menu:  We started with a green salad with yummy toppings - grilled corn, tomato, and bacon.  I cut sharp white cheddar cheese into shark fins.  I used the end of a mustache cookie cutter to cut them out instead of trying to do it by hand. 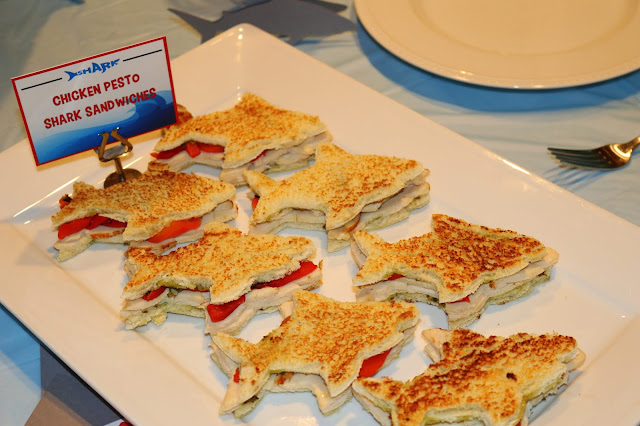 For the main dish, we had chicken, pesto, and roasted red pepper sandwiches.  I had a shark cookie cutter made by a local cake shop which I used to cut sourdough bread into sharks. Then we added slices of deli chicken meat that we cut with the shark cookie cutter as well so it would keep the look of the shark. Then we just added the other ingredients and grilled them on the stove. 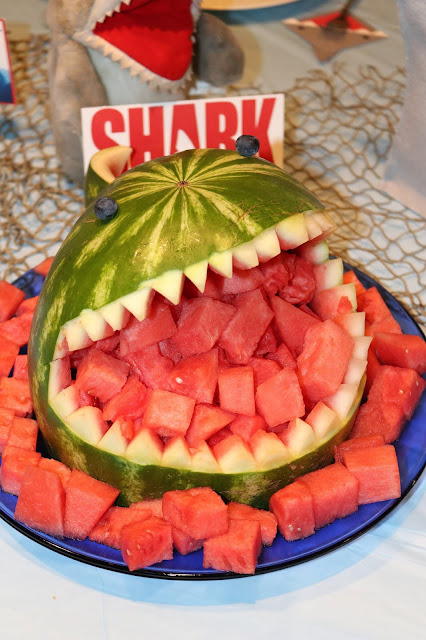 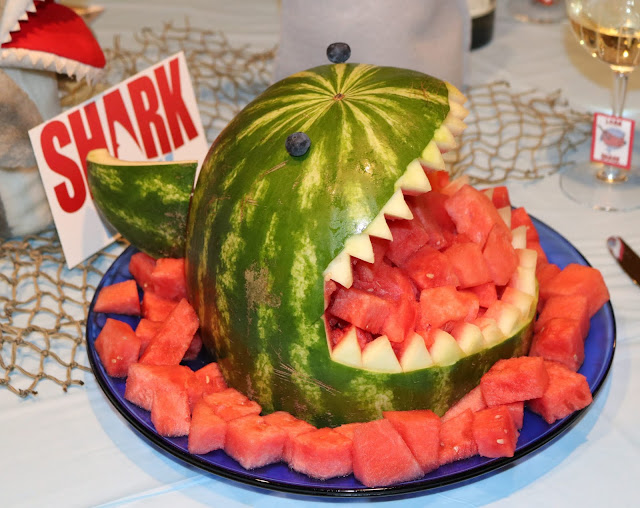 I carved a shark head out of a watermelon which was fun.  It took a bit of time, but it came out cute and wasn't too difficult. 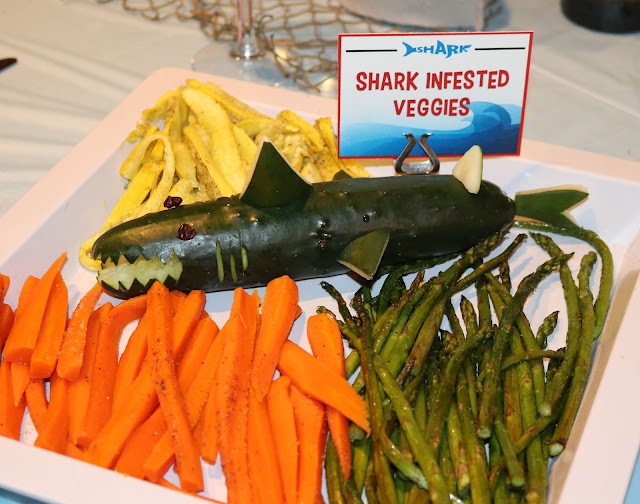 I also carved a cucumber into a shark for my "shark infested" veggies.  I served yellow squash, carrots, and asparagus that I cooked in the oven. 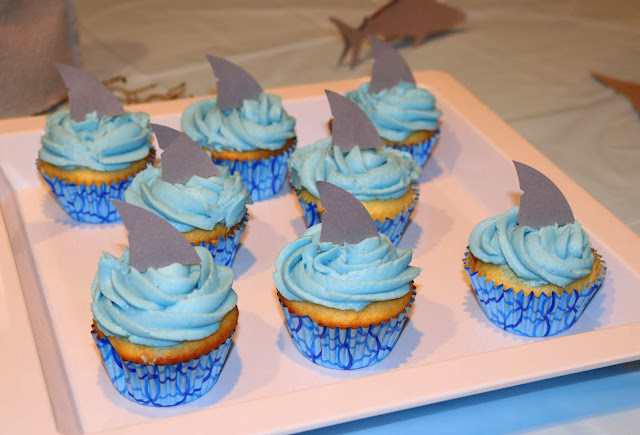 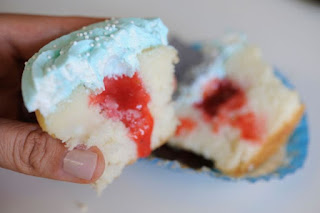 For dessert, I made white cake cupcakes with shark fins on top and a strawberry glaze inserted into the middle.  When guests bit into the cupcake, the strawberry glaze was a fun little surprise.  I didn't get a photo of the inside of my cupcakes, but this is a photo from Cupcakes and Cashmere, where I saw the idea. The shark fins on the top are just cardstock I attached to a toothpick.  I stuck them in right before serving, so that they did not get greasy from the frosting. 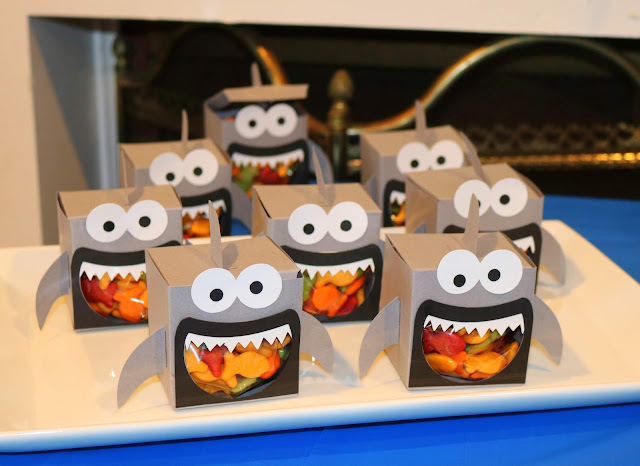 Favor:  I love these favors!  I made them using a template I found online and then just cut them out using my Cricut. Then I just had to fold the box and glue all the pieces to it.  They do take a bit of time to make, but luckily I only had to make 8 of them.  I put a celephane bag inside with goldfish crackers for each guest.  Cute huh?!

I hope you enjoyed reading about this party as much as I enjoyed planning it.  Thanks for reading...you're "Jawsome"!

Posted by InviteandDelight at 11:20 AM