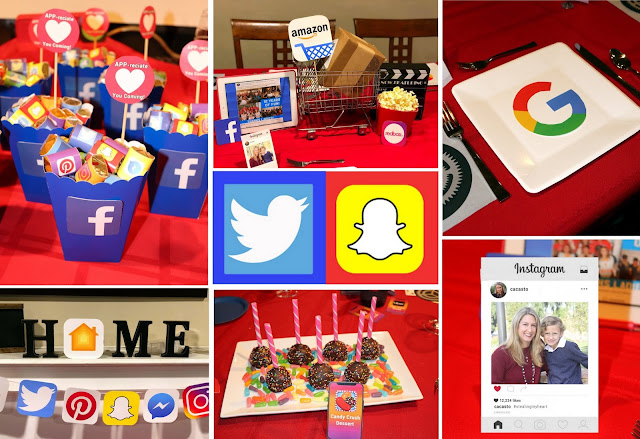 Want an off-the-wall theme that's a bit out of the norm?  Try an APP party!  I was trying to think of a theme for my March monthly dinner Monday morning, when I picked up my phone, unlocked it, and was inspired by all the fun and colorful apps.  All of sudden the ideas for how to make this party work started cramming my brain, and I knew it would make a super fun party to plan.  I decided to call it an APP-reciating Friendships party! 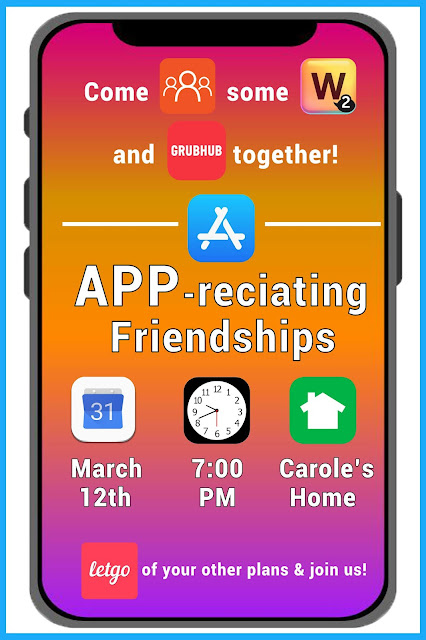 Invite:  I messed around with the names of different apps to use to create the wording of my invite. All the apps I used for the party are for iPhone (android users would have different looks), but I wanted to stay consistent.  I have an iPhone, so those apps won out. It was also a bit hard to stick with apps everyone would know.  I think I did an okay job with most of them - Shutterfly Share,Words with Friends, and the APP store were the only ones on this particular invite that someone might not know. (Of course, using the Google app, they could figure it out!) 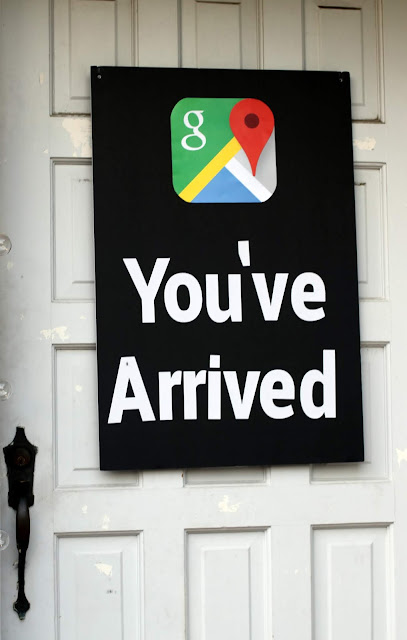 Entry Decor:  A simple sign with the Google Map app was my entry.  I added the "you've arrived" since that is close to what Google maps says when you've reached your destination. It might be "you have arrived", but I can't remember. 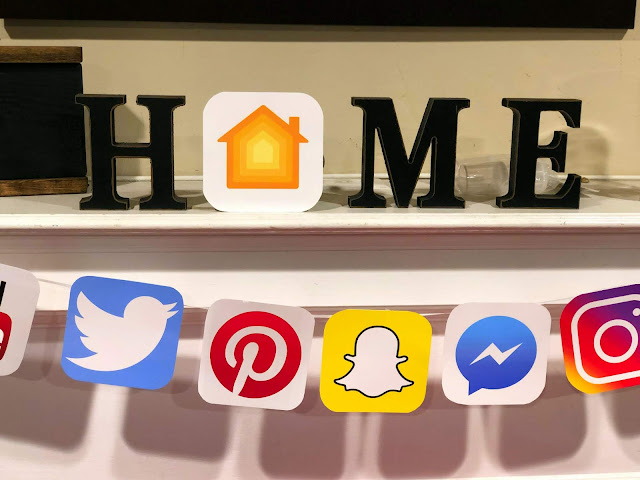 Inside Decor:  I made this simple banner with the 2019 most popular aps.  I also have a HOME sign on my mantle all year that currently has a shamrock as the "O", so I just printed the iphone Home app to set in front of it. 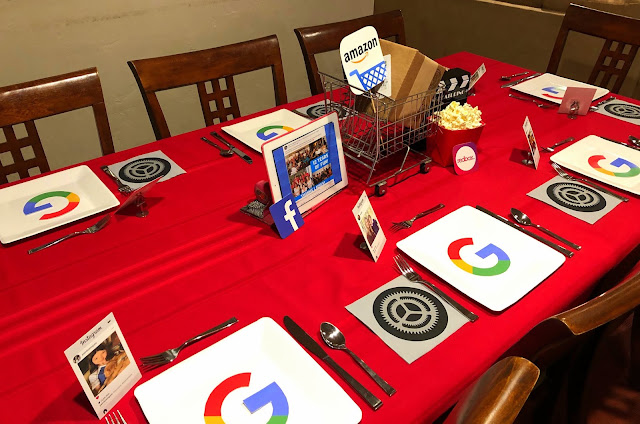 For the dinner table, I created a fun app-inspired table. 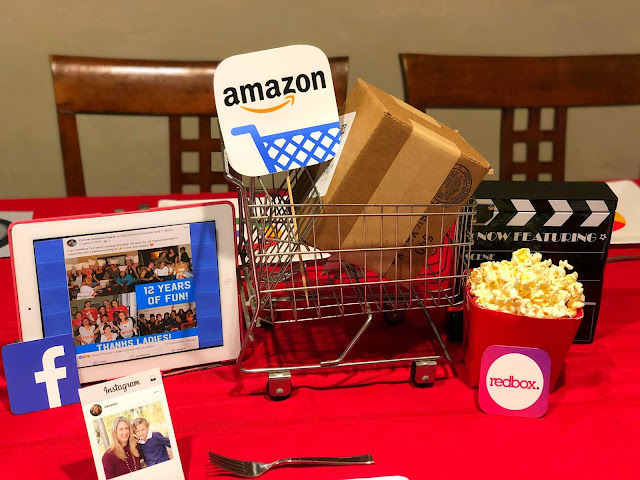 The centerpiece was made from items I already had around my house that I adapted to fit a few apps. 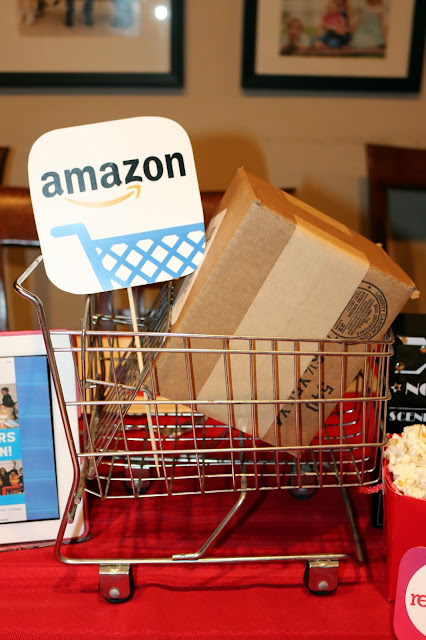 The large shopping basket I purchased decades ago.  I placed a small packing box (not Amazon unfortunately as I didn't have a small enough one) and added the Amazon app icon.

To one side, I set up my iPad and printed a post from one of our past dinner parties. On the other side, I found a small red box and filled it with popcorn, set a Redbox app icon in front, and a metal movie clapboard behind. 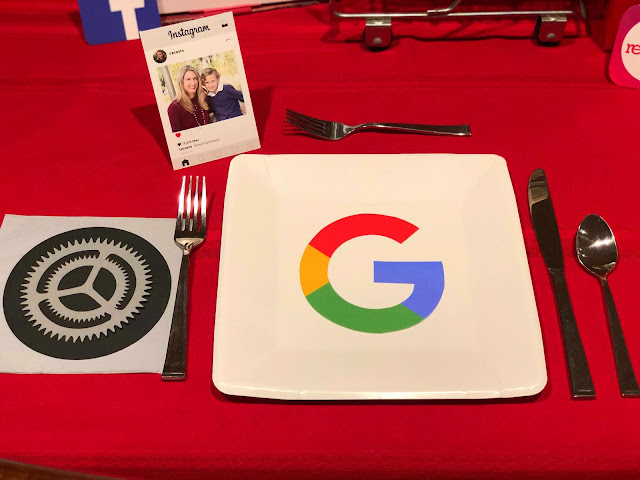 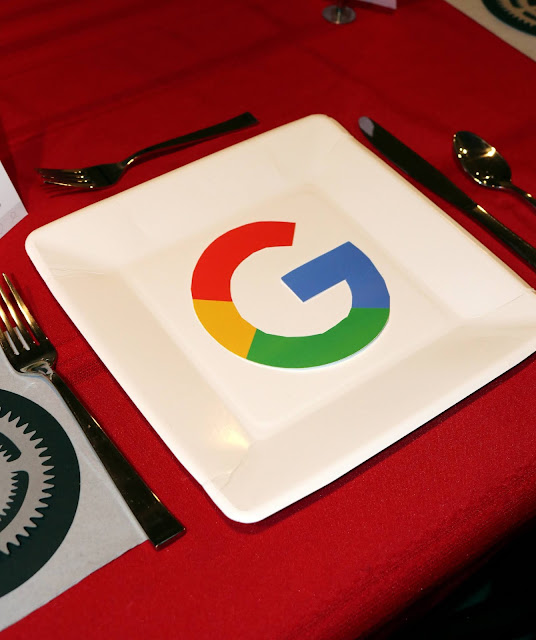 I bought white square paper plates from the dollar store and just placed the Google app "G" in the center.  I didn't glue the G, so guests could easily take them them off when it was time to serve food. 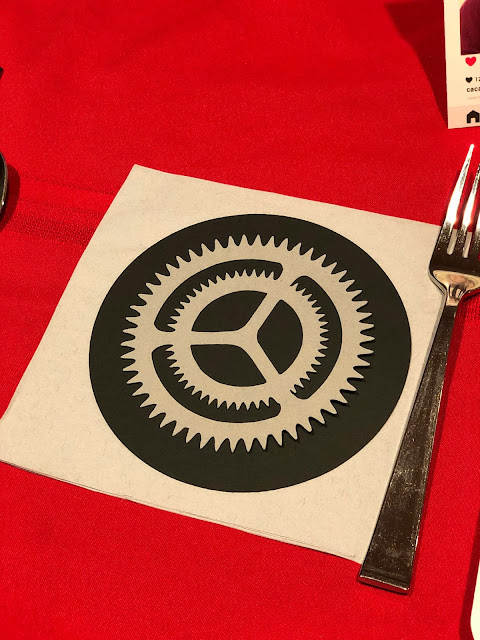 My napkins were the iPhone settings app (hence...place setting).  I bought grey napkins and then used my Cricut to cut out a black circle and the grey cogs.  Again, these were just set on the napkin rather than glued so that guests could take them off to use the napkin. 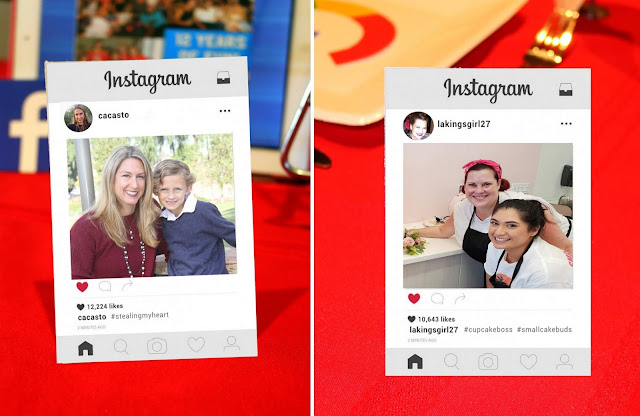 For placecards, I created Instagram posts for each guest.  Some of my guests had Instagram accounts, so I used their real user name, but many did not.  For those that did not, I just invented a name for them.  I did these placecards on Photoshop, so I invented the number of "likes" and created fun hashtags to go with each post. 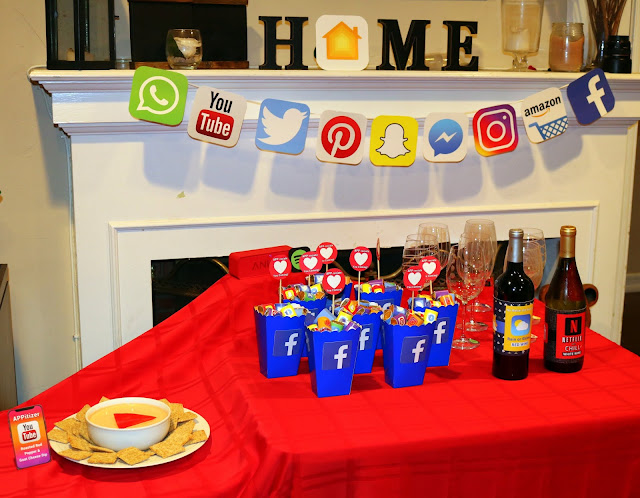 On my side table with the banner I served the drinks, the app-etizer, and had the party favors. 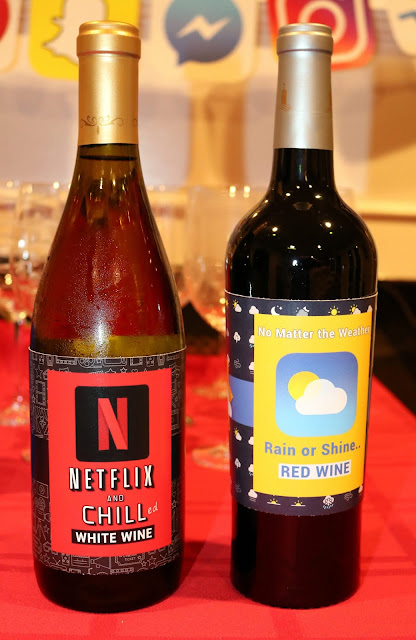 I designed my wine labels on PhotoShop.  I always challenge myself to come up with fun labels, so I didn't want to just use wine apps.  Instead I played with fun phrases -- the Netflix app with "Netflix and Chill"ed White Wine and the weather app with "Rain or Shine...Red Wine." 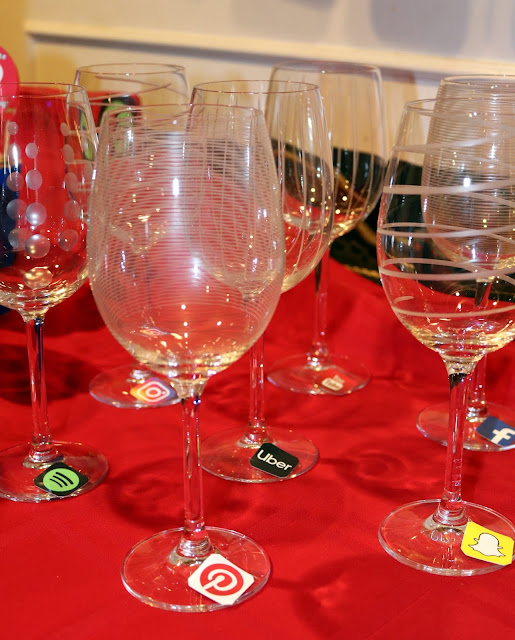 For wine charms I printed out the app icons of some of the most popular apps. I used scrapbook tape to attach them the base of each glass. 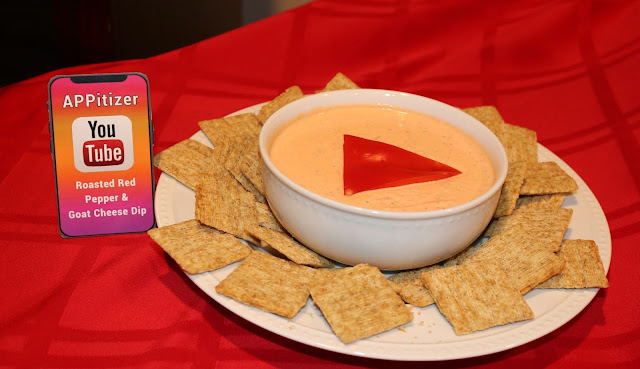 Menu:  We started with a Skinny Roasted Red Pepper and Goat Cheese Dip (yum!). Find the recipe here. I added a red pepper cut in the shape of a play button to link it to the YouTube app icon. 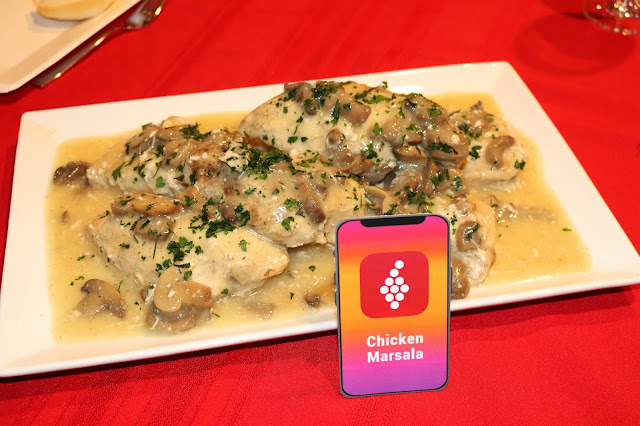 For the main dish, I served a Slow-Cooker Chicken Marsala.  Find the recipe here.  This was good, but a little dry for me.  I am anxious to try the recipe again to see if I can keep the chicken tender.  I used the Vivino wine app for this one since it is made with white wine. 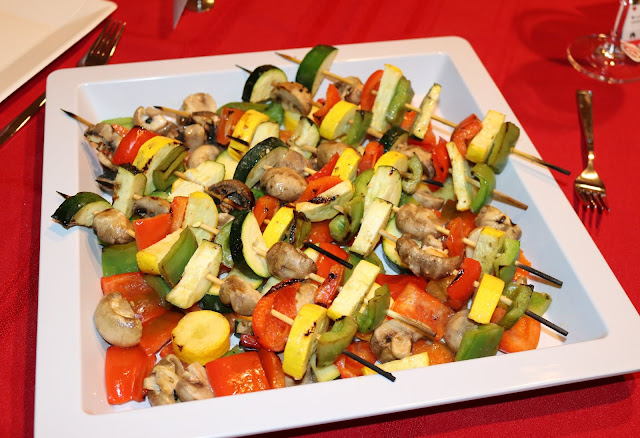 As a side dish, I served vegetable skewers with red and green peppers, zucchini, squash, and mushrooms.  These were grilled on the BBQ.  A bit of a stretch to link these with the app theme, but I went a rhyme of Netflix VeggieStix! 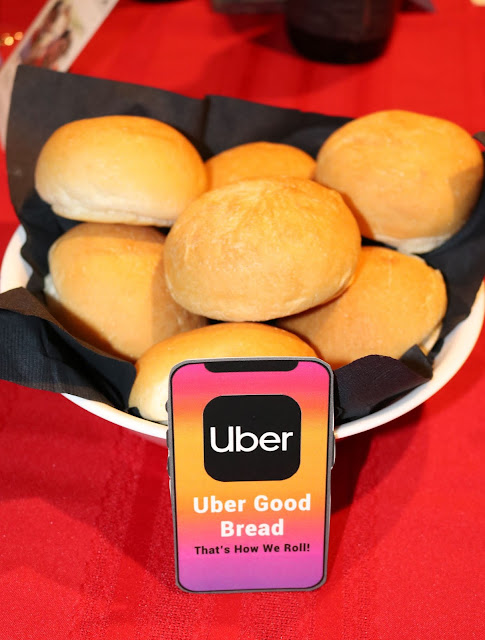 I also served rolls. I called these Uber Good Bread and tied in the driving aspect of Uber with "That's how we ROLL!"  If you can't tell...this is my silly sense of humor! 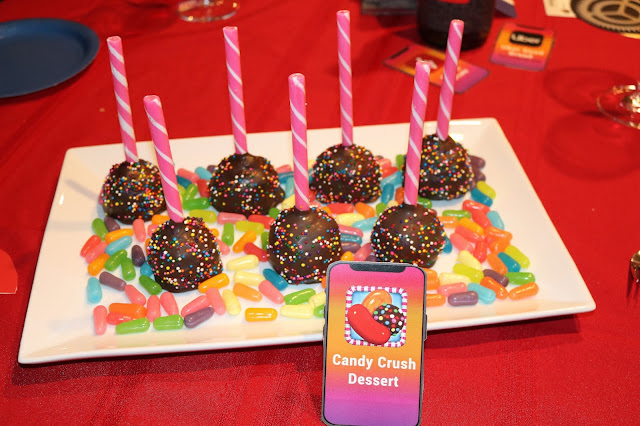 I decided to theme my dessert around the popular app Candy Crush.  I haven't played this game before, but looking at the app icon inspired this dessert.  The app icon has a chocolate cake ball with sprinkles, so that is what I recreated. The app border is pink and white stripes, so I used pink/white sucker sticks for the cake pop stick.  I placed fruity Mike n Ikes on the plate to represent the jelly bean-like candy of the app. 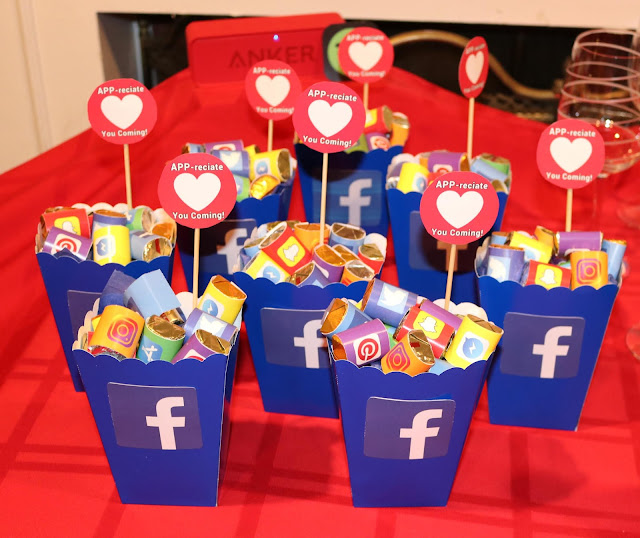 Favor:  I wanted to incorporate several apps into my favor, so I decided to  wrap mini chocolate bars in app-inspired labels I made on PhotoShop.  I bought royal blue boxes from Party City and printed a Facebook app icon for the front.  I filled the boxes with some issue paper and left room for 15 chocolates at the top. 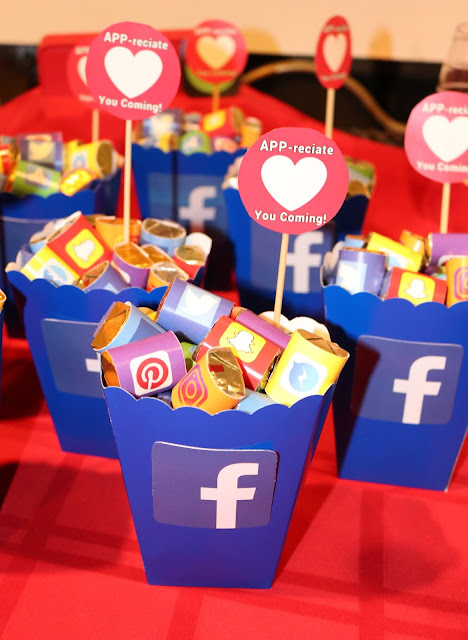 I finished the favor with a "love" heart from Facebook with the words "APP-reciate you Coming" on it.  It is a bit time consuming to wrap and tape each of the little candy bars, but I love how they turned out.

This party was fun to plan and fun to decorate for.  There is no much you can do with different apps.  It would be a great birthday party theme where you could play "Heads Up" or "Minecraft" or any of those app games.

Posted by InviteandDelight at 3:45 PM