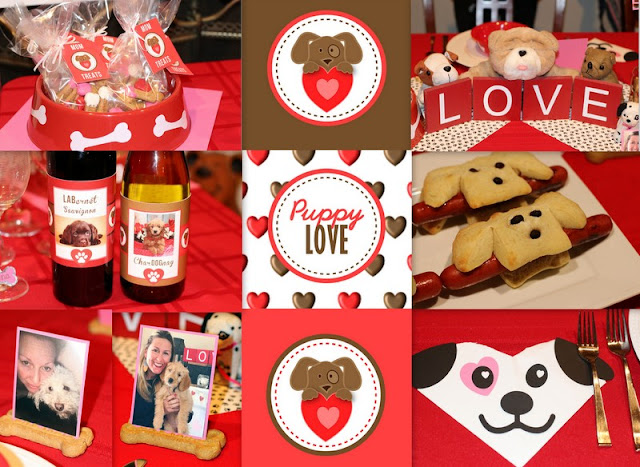 Our family just got a new puppy, and she might be the cutest thing ever!  We are head over heels in love, so when it was time to think of a February monthly dinner theme, my thoughts gravitated to little Kona.  A chance to combine Valentine's Day with our newest puppy = a Puppy Love party!  My son and daughter had a puppy themed birthday party several years ago, but I wanted to make sure this party was different. 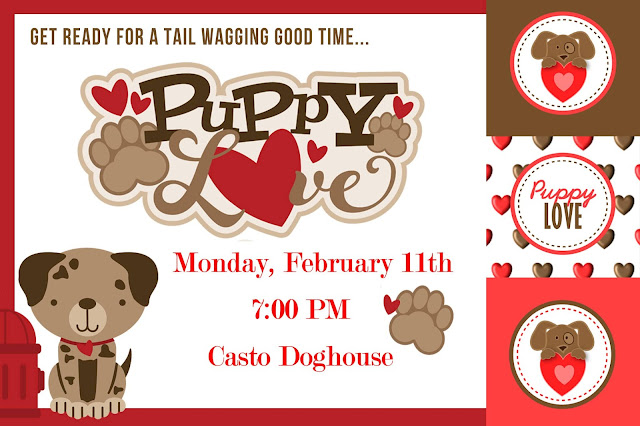 Invite:  Since this party was the week of Valentine's Day, my color scheme was mostly red combined with browns and a little pink.  I found some of these puppy images though a Google search and used PhotoShop to create this invite. 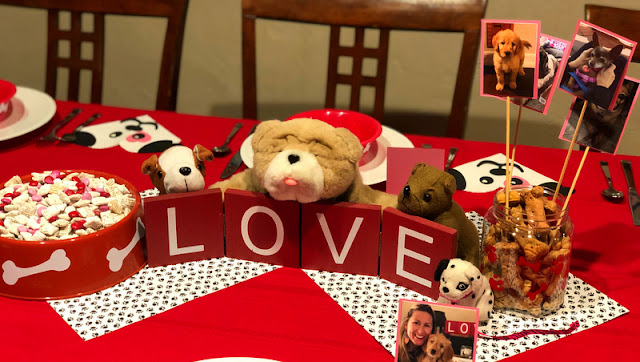 Inside Decor:  Although I don't have a photo of it, my entry sign simply stated, "Come, Sit, Stay".  I set my table with a red tablecloth and white plates.  For the centerpiece, I bought a couple pieces of puppy paw print scrapbook paper from Michaels and added some puppy and Valentine-related items. 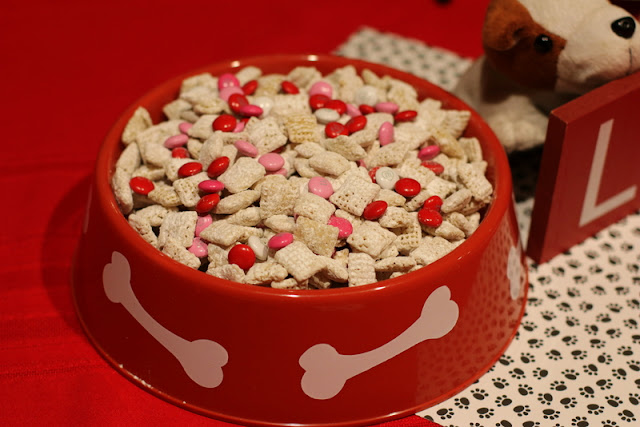 I made Valentine Puppy Chow for guests to snack on as part of the centerpiece.  There's a ton of simple recipes for this on Pinterest.  I picked the one that used the least ingredients, and it was perfect.  The dog bowl is from the Dollar Tree. 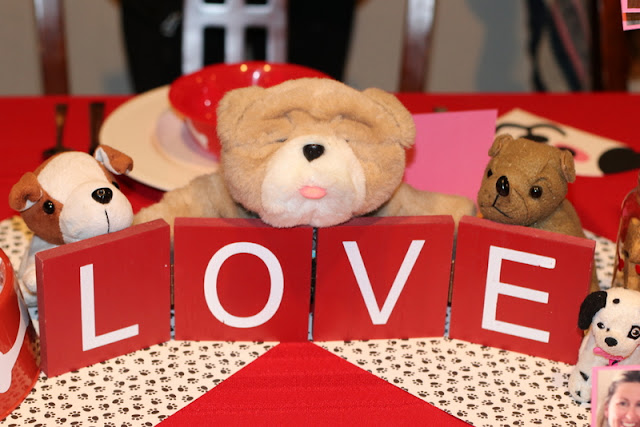 In the very center, I used a Valentine's Day LOVE decoration I got from Michaels and surrounded it by stuffed animal puppies that my kids own. 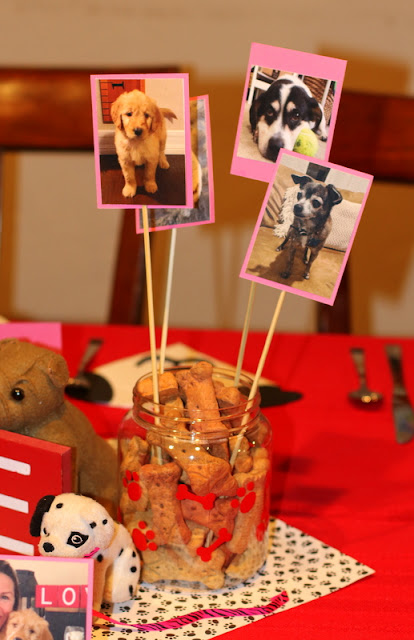 This puppy print snack container I got from the Dollar Tree, and I filled it with small dog bones (also from Dollar Tree).  All the guests that were attending this party have dogs, so prior to the party, I emailed them and asked if they would send me a photo of their dog(s) and a photo of themselves with their dog.  I used the photos of just their puppies to print and glue on skewers.  There was a puppy on both sides of the skewer so both sides of the table had cute pups to see. 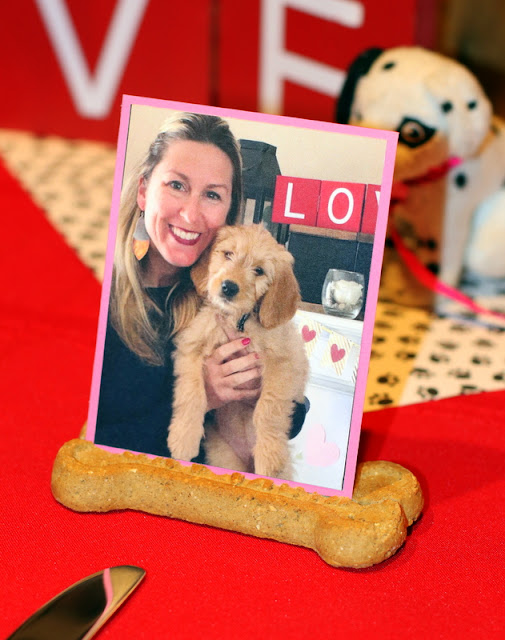 I used the other photo to make place cards for each guest.  I backed each photo to pink cardstock.  I bought the dog bones from Costco, and my husband sliced a slit in the bone, so that the photo would stand up in it. 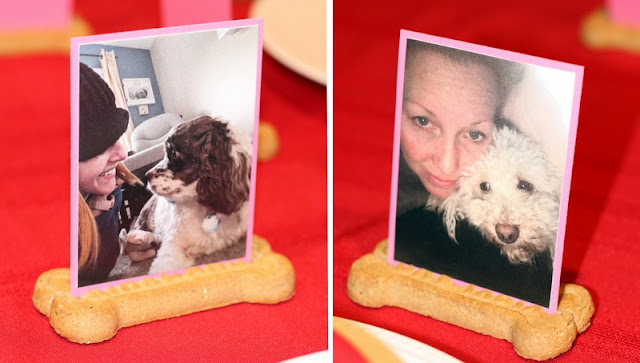 Here's few just because these girls and their puppies are so cute! 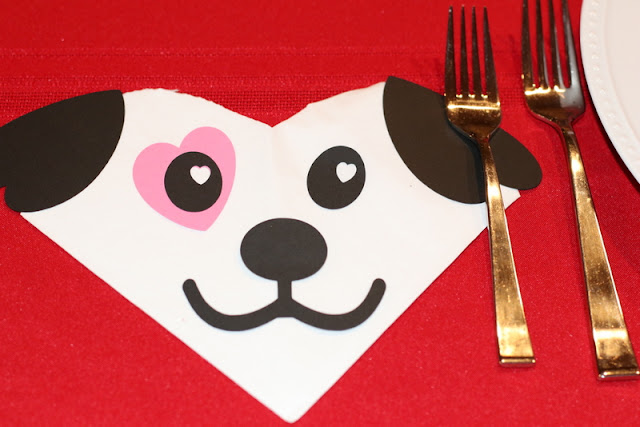 I love the cuteness of these napkins too!  I had seen puppy Valentine's Day cards made with hearts, so I decided to try the same thing with a napkin instead. I bought plain white paper napkins from the Dollar Tree and cut them into hearts.  Then I used my Cricut to cut all the black and the pink pieces out of cardstock.  I set the pieces on top of the napkin rather than glued them, so that the napkin was actually usable once we started eating dinner. 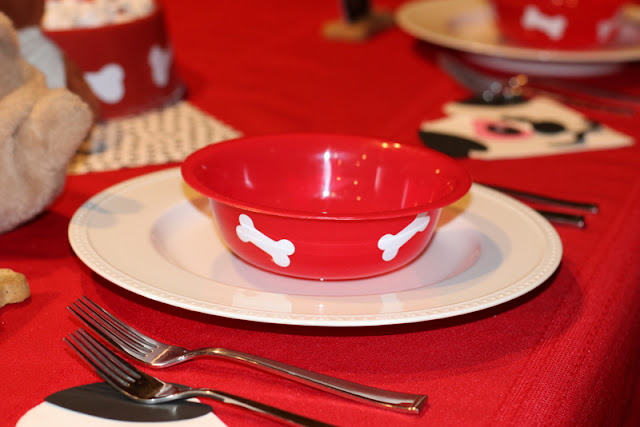 Another addition to the table was these dog bowls which I served the salad in when we sat down to dinner.  I couldn't find cheap dog bowls this size, so I made these.  I found the red bowls at the Dollar Tree in a 3 pack.  Then I cut the dog bones out of vellum with my Cricut and stuck 6 to each bowl.  Simple.  Cheap.  Easy.  Love that they match the large dog bowls I used in other parts of the party. 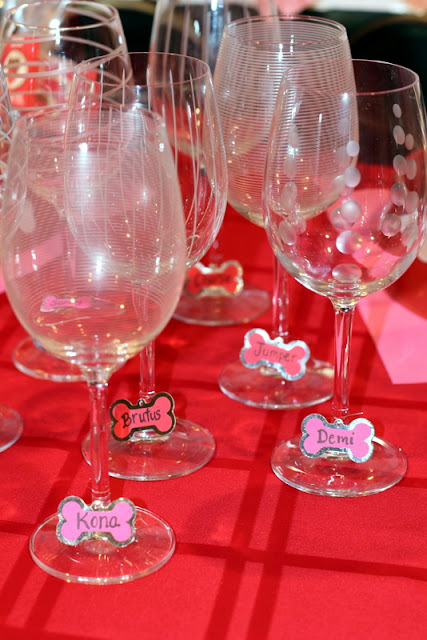 For wine charms, I made puppy collar tags using my Cricut.  I used metallic silver with either a red or a pink center, and then wrote the name of each guest's dog, so they knew which glass was theirs. 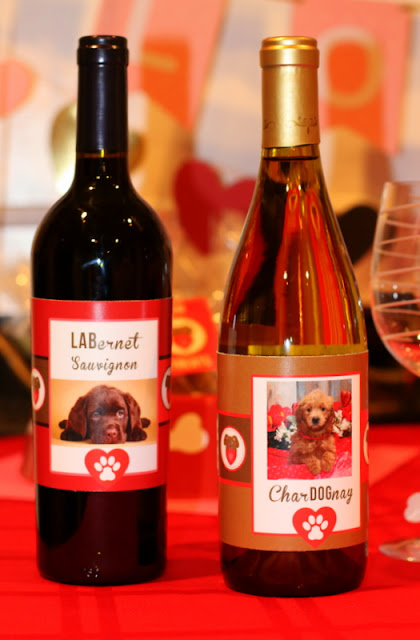 I designed wine labels to match my theme/invitations with cute puppy photos. 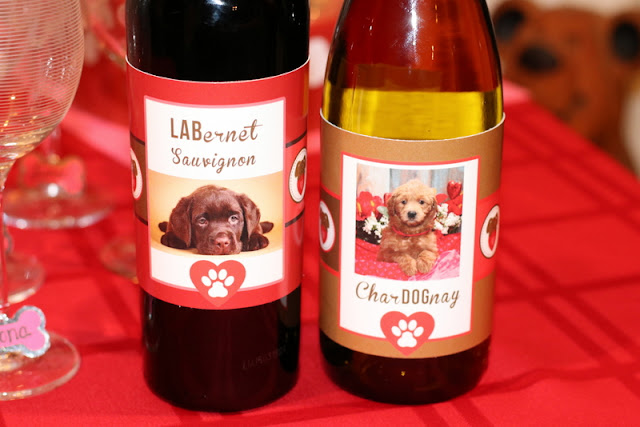 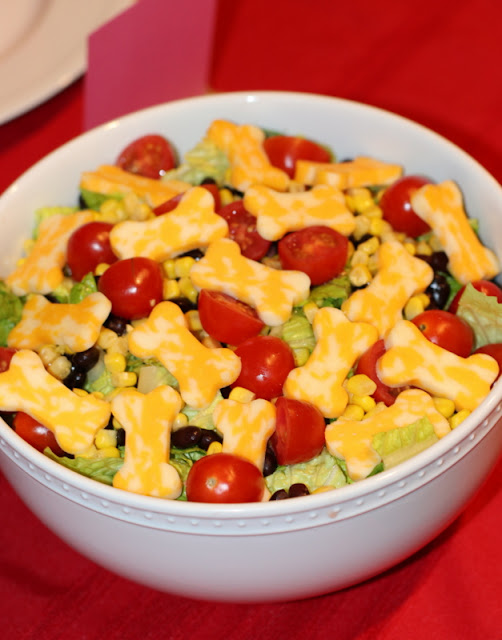 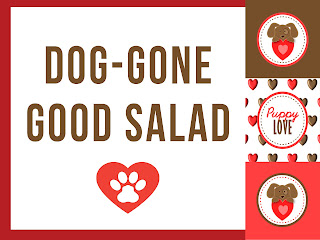 Menu:  I wanted to served puppy-related items, but wanted to make sure the evening felt like an adult dinner party.  I started with a simple salad that was romaine lettuce, cherry tomatoes, black beans, corn, and cheese served with a store-bought cilantro lime dressing. I used a mini dog bone cookie cutter to slice pieces of cheese to add to the top to bring in the theme.  The menu tags I made to match my invitations. 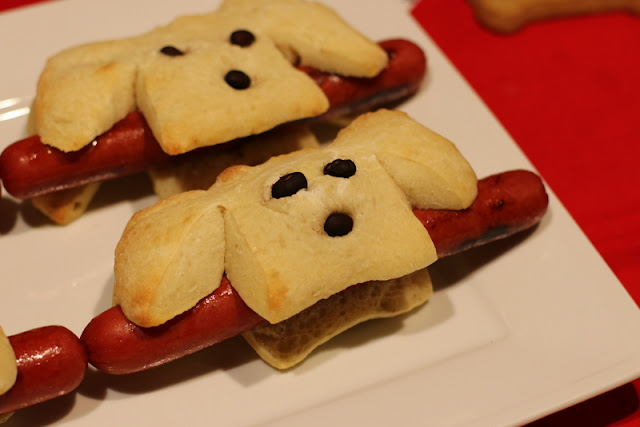 For the main dish, I had a small hot dog bar.  Nothing too fancy, but just enough options to make it feel like an adult gathering rather than a kid party. 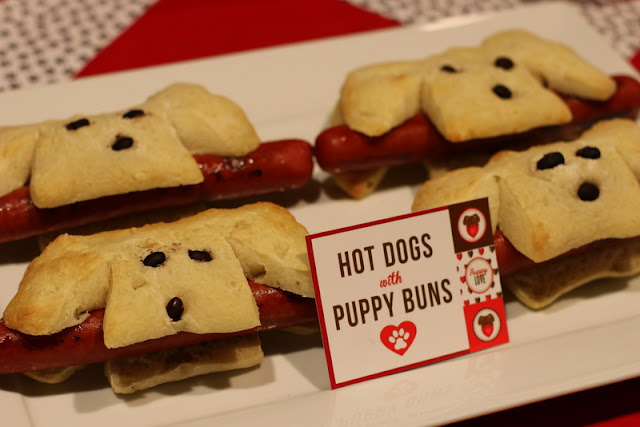 With the hot dogs, I served these cute puppy buns.  I bought Pillsbury french bread dough and shaped it into a puppy head.  We used the black beans I was already preparing for my salad for the eyes and nose. 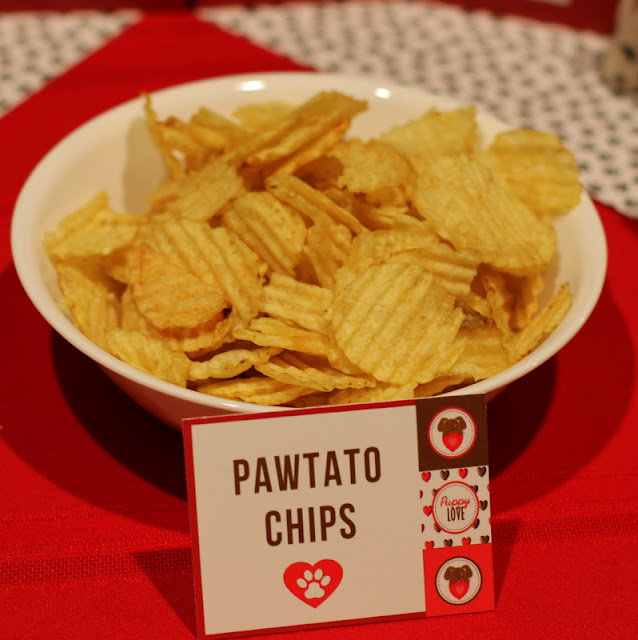 I served Paw-tato chips with the hot dogs as an easy side. 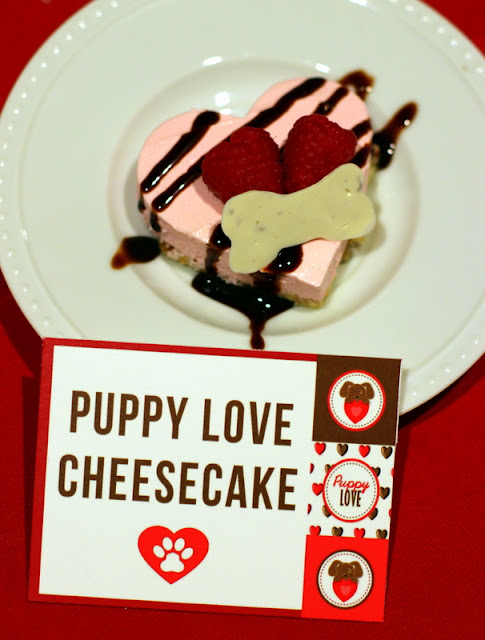 I didn't get a great photo of my dessert, so it is a bit hard to see how really cute this was.  I made a no-bake cheesecake and added a bit of red food coloring to make it pink.  After making a Vanilla Wafer crust that I pressed into the bottom of a 9x13 baking dish, I spread the cheesecake on top and put it in the refrigerator.  When it was time to serve, I used a heart-shape cookie cutter to make cheesecake hearts.  Then I drizzled some chocolate and placed raspberries and white chocolate dog bone on top.  It was a nice small and light dessert, so it wasn't too much after a large meal. 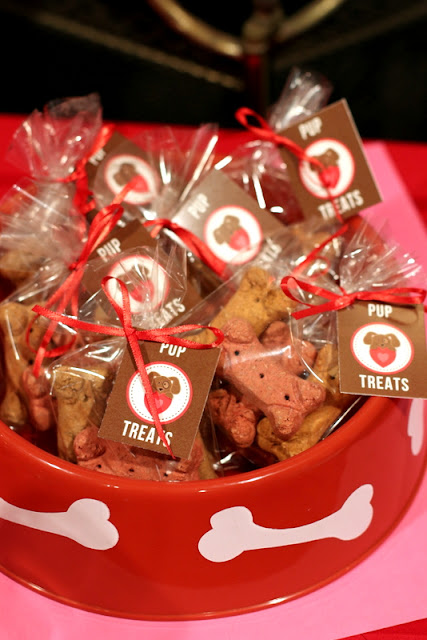 Favor:  Since it was a Puppy Love party, I wanted to have a favor for both my friends and their pups.  For the pups, I used small dog bones from the Dollar Tree.  I attached a tag that said Pup Treats. 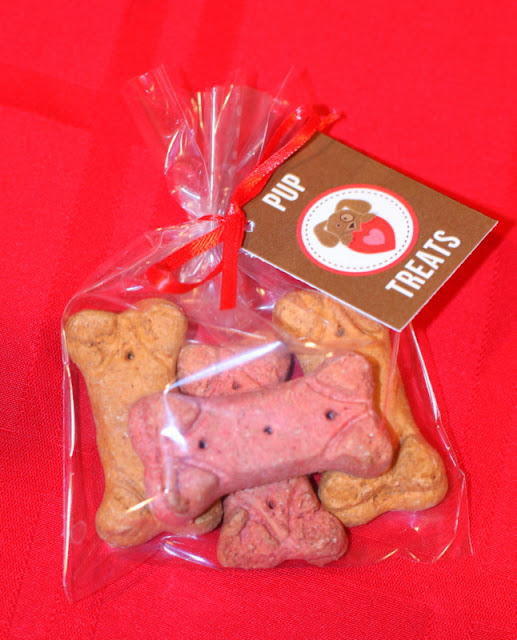 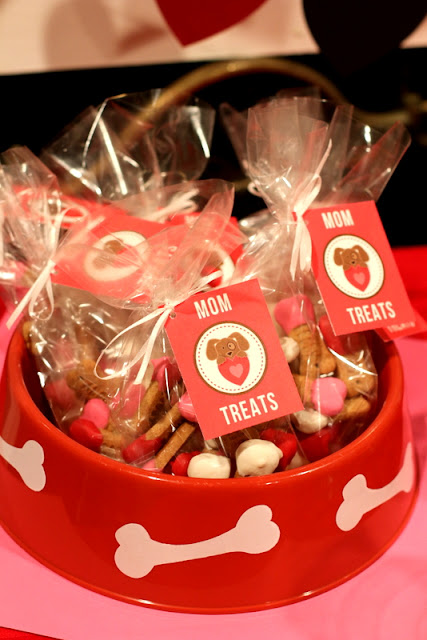 For the guest favor, I bought Scooby Snacks and dipped them in red, pink, or white chocolate melts on one end.  The tag for these was red and said Mom Treats. 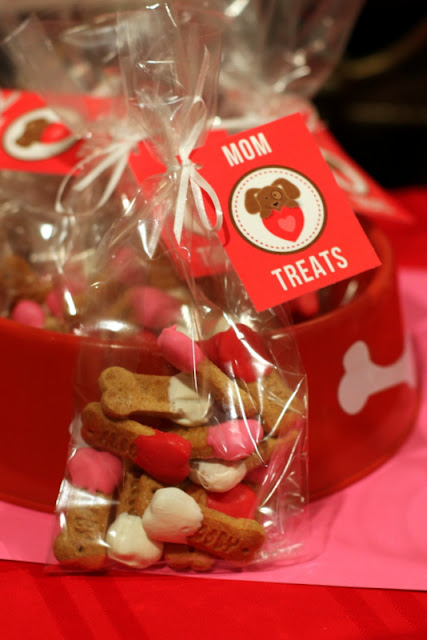 I dipped them in the chocolate for of course the yummy flavor and fun Valentine coloring, but also in hopes that they wouldn't mix these up with their puppy's favor when they got home! 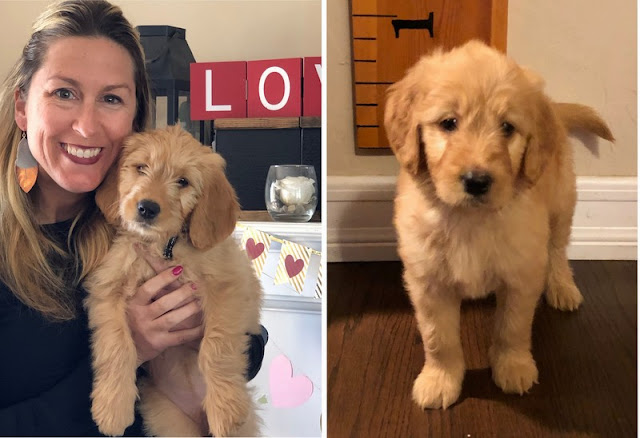 All in all it was a fun, simple, and inexpensive party. Can't wait to watch our love for Kona grow...as you can see, she's barely on our family's height chart!

Posted by InviteandDelight at 3:17 PM

Email ThisBlogThis!Share to TwitterShare to FacebookShare to Pinterest
Labels: Kids Parties, Menus with a Theme, Valentine's