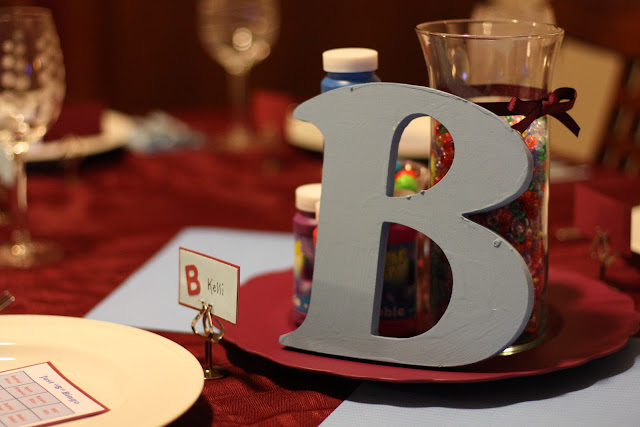 If you haven't figured it out already, my party themes tend to not conform to the generic/common ones.  This monthly dinner was no exception.  The party was pretty close to Halloween, but to put a twist on the generic costume party, I decided to throw a Just "B" Party.  If it starts with the letter "B", it was acceptable at this party.  This party would be a great theme for any type of gathering -- a birthday party (especially if the guest's name begins with B) or a baby shower.  The possibilities are endless.

The invitation for this party was a giant "B" I cut out of card stock in the party colors Blue and Burgundy.  The text on that back played up the "B idea..

Halloween may "B" over,
but the fun is just "B"ginning.
"B" prepared to have some fun
and "B" a little crazy
at a
Just "B" Party!
Dress up & "B"come something that starts
with the letter "B".
(bee, bus driver, biker babe, etc.)

Don't "B" afraid to get creative.
"B" bold and have some fun with it! 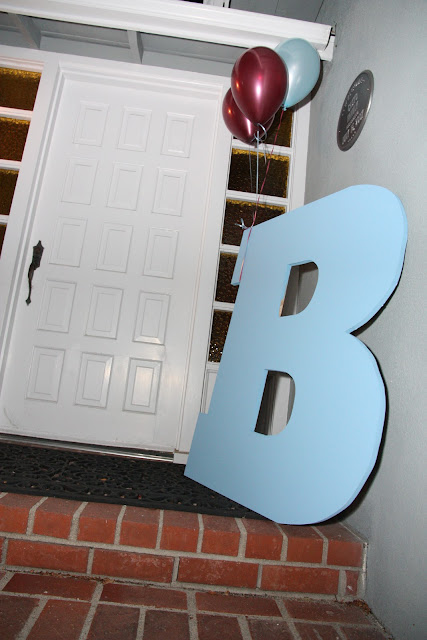 Decor:  With the help of the woodshop teacher at my work, I cut out a giant wooden B, painted it blue, and placed it at the entry door. I added a few burgundy and blue Balloons as well. 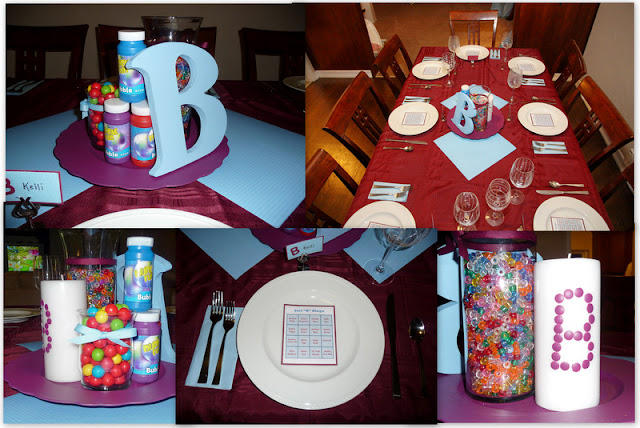 The table was set with a burgundy tablecloth and two blue pieces of scrapbook paper.  I painted a cheap charger I purchased at the 99 Cent Store and filled some vases with B items -- bumble gum balls and beads. Also on the charger, I stacked jars of bubbles, a large letter B painted blue, and a pillar candle with a B.  To make the candle, I painted thumb tacks burgundy and stuck them into the candle.  The place cards were simple blue card stock that I added a burgundy B to before writing the guest's name.

On each plate, I also wanted to have the menu listed.  I decided to use Bingo to display the menu.  We used the beads in the centerpiece to see who won and got to hit the dessert table first! 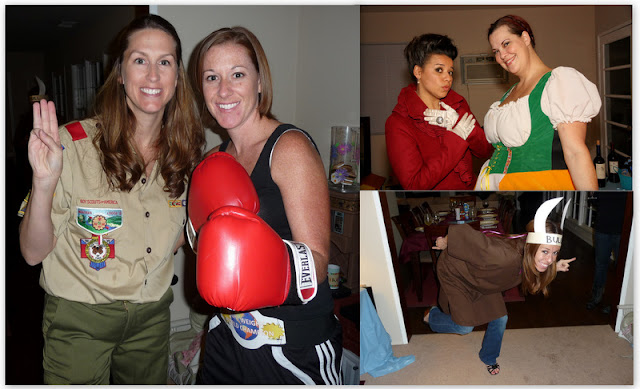 Attire: Guests were instructed to dress in something that started with the letter B.  It added to the laughter and fun of the party.  We had everything from a Boy Scout to a bull! 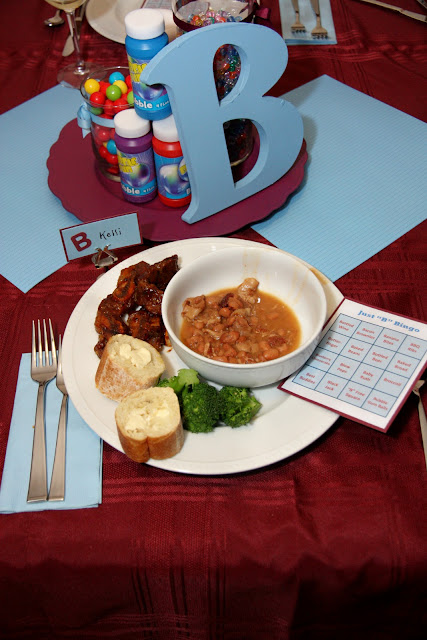 Menu:  I always have to work the day of my monthly dinner parties, so I need menu items I can either make ahead of time or that do not involved too much prep (remember, I have 2 young kids).  For my "B' items, I served: 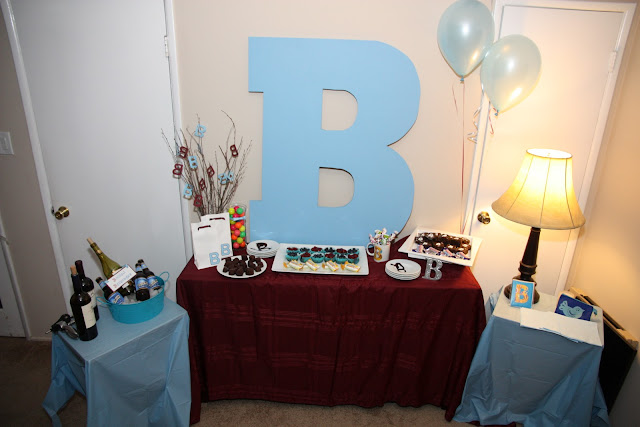 I couldn't decide on which dessert to have at this party, so I decided to create a dessert table.  I used card stock to create B ornaments to hang from branches in a vase.  I also had a Bottled Beverages pail to serve the drinks. 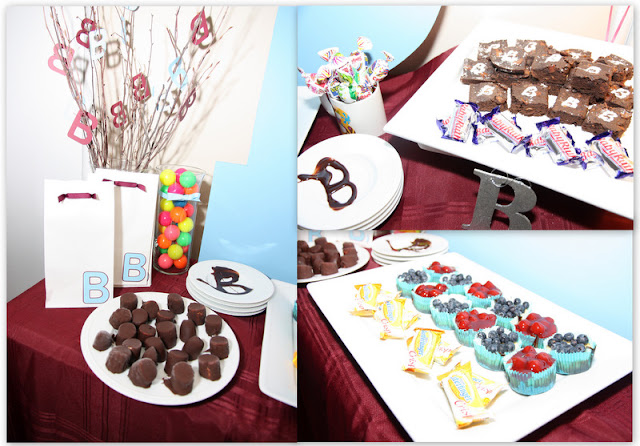 We had several yummy desserts on the table -- bacon brownies that I stenciled a B in powdered sugar on top, mini berry cheesecakes, frozen banana bites, Butterfinger and Baby Ruth bars, and Blow Pops in a B mug I found at Michaels. I used chocolate syrup to create a B on the dessert plates give it another special touch.  Instead of doing a separate favor for this party, I decided to make to-go bags for the guest's to take home the extra desserts and the decor from the table.

This would make a fun baby shower party or a birthday party if your birthday boy/girl has a first name that begins with B.  Or you could choose another letter & do many of the same ideas. Either way...it will "B" a fun party!!

Posted by InviteandDelight at 10:31 PM

Love the B theme. If I can convince my husband to try for a baby boy...then I will do this B theme!