Red, White, and Blue Through and Through - Part I

In honor of Veteran's Day, I thought I would post two of the parties I have hosted that have been a patriotic theme.  The first party (hosted in November of 2008) was a Rock the Vote party in honor of the Presidential Elections that year, but the color scheme/patriotic theme/menu could definitely be used for Veteran's Day, Memorial Day, July 4th....any day to celebrate the good ol' red, white, and blue. 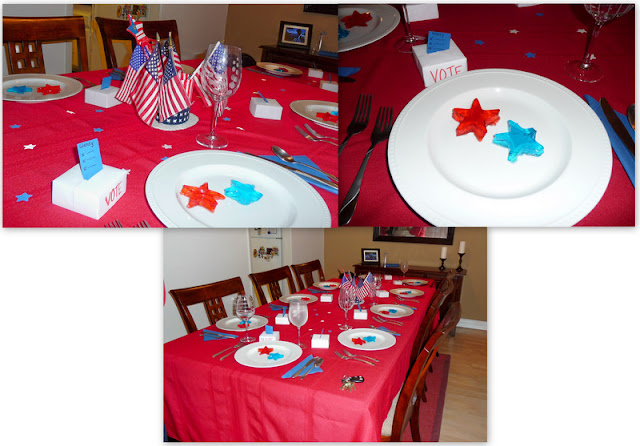 Decor:  The table was a simple red tablecloth with a red, white and blue hat centerpiece.  My mom made the hat out of needlepoint.  I placed small American flags and wooden stars coming out of it. I also placed white and blue star confetti along the table, and used white plates and blue napkins. On each plate, I made jello jigglers for decoration: 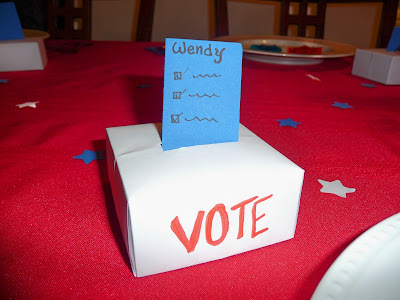 Since this particular party was centered around the Presidential Election, each place card was a voting box.  I used origami to fold a box and cut a whole for the "ballot" which had the guest's name written on it.  We also had a voting themed game which asked guest's to Rock the Vote by choosing their favorites: Coke vs. Pepsi, indoors vs outdoors, etc.  This was a great discussion starter for various topics and stories throughout the evening.

Menu:  I wanted to serve very American food at this dinner.  What is more American than fried chicken and corn on the cob!  Here are the recipes I used:

Oven Fried Chicken
12 chicken thighs
3 eggs
1 cup all-purpose flour
1 cup Italian seasoned bread crumbs
Salt and pepper to taste
1 teaspoon paprika
½ cup vegetable oil
Preheat oven to 350 degrees.  Place flour in shallow bowl and season with salt and pepper to taste.  Put the bread crumbs in another shallow bowl and beat the eggs in another bowl.  Dredge the chicken piece by piece in the flour, then the eggs, then the bread crumbs, until all pieces are coated.  Pour the oil into a 9x13 inch baking dish.  Add the chicken to the dish and sprinkle with paprika to taste.  Bake in the preheated oven for 30 minutes, then turn the pieces over and bake for another 30 minutes.  Remove from oven and drain on paper towels.
Mashed Potatoes
2 pounds of potatoes
1 teaspoon salt
1 cup of half and half
6 tablespoons butter
Salt and pepper to taste
Peel and quarter the potatoes.  Add the potatoes to a large pot with enough cold water to cover them by an inch or so. Add salt and bring the water to a boil. Cook until the potatoes are tender when pierced with a knife. (About 15 minutes). Drain the potatoes return them to the pot and cook the drained potatoes over low heat for a couple of minutes to evaporate some of the water still in the potato. Mash by your method of choice. Blend in butter, half & half, and any other ingredients you prefer. Season with salt and pepper.
Grilled Corn on the Cob
Ears of Corn
Salt and Pepper
Butter
Rub ears of corn with butter and sprinkle with salt and pepper.  Wrap completely in tin foil and place on the grill for approximately 15 minutes. 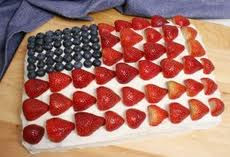 For dessert, I made a Flag Cake with blueberries and strawberries.  This is popular recipe I see in magazines all the time near the 4th of July, and I had always wanted to try it.*
Flag Cake
2 pints of strawberries, divided
1 pkg. (10.75 oz.) frozen pound cake, thawed, cut into 10 slices
1 1/3 cup blueberries, divided
1 tub (12 oz.) Cool Whip Whipped Topping, thawed
Slice 1 cup strawberries; set aside.  Halve remaining strawberries; set aside.  Line bottom of 13x9 inch baking dish with cake slices.  Top with 1 cup sliced strawberries, 1 cup blueberries and whipped topping.  Place strawberry halves and remaining blueberries on whipped topping to create a flag design.  Refrigerate until ready to serve.  Makes 15 servings.

It is always the right time to celebrate American and all that we stand for.  This Veteran's Day weekend, I really want to thank all the service men and women who have fought and those that continue to fight for our freedom.
*Since I did not happen to take a photo of my cake, this photo was found on Google.  However, it represents the exact cake I made.

Posted by InviteandDelight at 3:07 PM