Although I am not a huge fan of Halloween, the second monthly dinner I ever had with my friends was a House of Horrors theme.  I asked all guests to wear black rather than do the costume thing.  It didn't have all the creative flair that my current parties have, but the main activity/menu was super fun.  If you are throwing any kind of Halloween dinner party, you have to do this!  Instead of making a formal invitation for this party, I simply sent out a "menu" to guests and asked them to chose their courses and implements (a.k.a eating utensils) for the evening.  Of course, guest's had only their best guesses as to what they were really ordering or would be given to eat with. 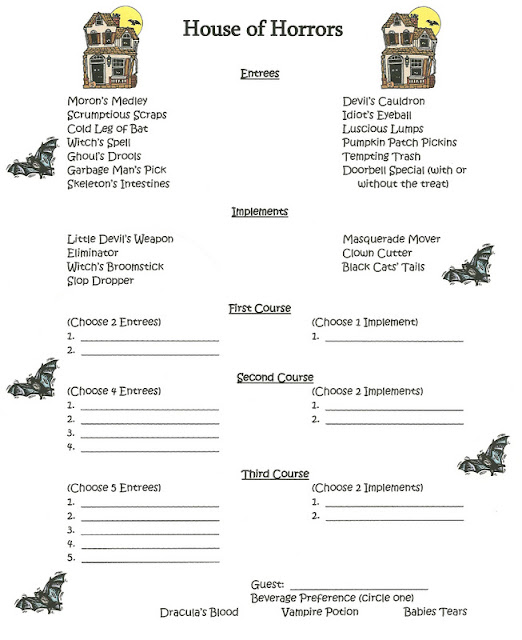 Menu: The food for this one can be almost anything.  It just needs to be able to be made ahead of time. Some of the items I served (each as a different name on the list) were: 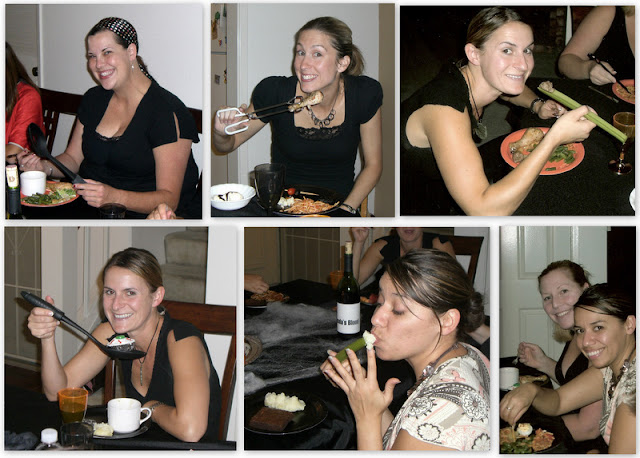 The only thing to keep in mind if you want to host a dinner like this one (and I highly suggest it if your numbers are under 15), is you definitely need a cheat sheet as well as an extra helper in the kitchen to get items on the plates correctly. Remember, each plate is different for each course depending on what the guest filled in as their menu.  The guest's also had drink choices.  For these, I designed simple labels for the wine bottles.

Decor:  I didn't do anything super crazy with decorations for this one.  Lots of cobwebs, spiders, skulls with candles on the table, etc.  Basic Halloween stuff.  I bought one of those 100 packs of tealight candles to darker the room. I played haunted organ music in the background. I carved out a pumpkin and filled it with ice to chill the wine.

As I said, this was only the second monthly dinner I had, so it had not evolved to the type of dinners I have now, but it was super fun and brought us lots of laughs.  If I were to do a Halloween theme again, I would definitely give these Hershey bar favors I found on pinterest.  They are from theidearoom.com which has great ideas for a mummy-themed birthday party!  These Hershey favors are so easy to make & look how adorable! Check it out!! 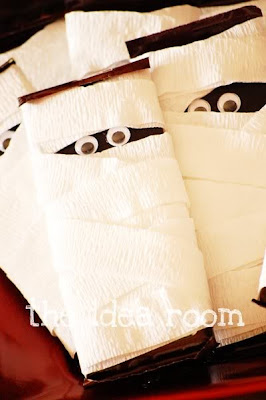 Posted by InviteandDelight at 5:21 PM

I'm so glad you finally decided to make a blog of all your ideas!!! Love it!! I'm forwarding this award on to you: www.jugglingwithkids.com/2011/10/i-got-award.html