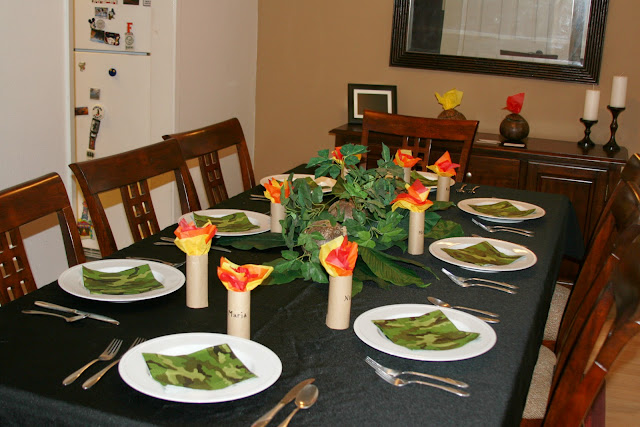 Television shows make excellent party themes. I realized this back in June of 2008 when I flipped on the TV one evening and saw a clip from a Survivor episode.  While I am not really a huge fan of living for months in dirt and eating cockroaches, I do love challenges and the thrill of competition.  This is what I decided to bring to my Survivor Soiree monthly dinner (not the gross bugs).  A cute invitation for this would be to send guests an application similar to the application someone would fill out to be a contestant on the CBS's Survivor.  You can find this on the Survivor website.  You just have to change the info to reflect your event.  Another idea would be make your invitation look like a torch or send a bandanna or map with the party details written on it. In my invitation, I asked guests to dress in camouflage, but only a couple did. 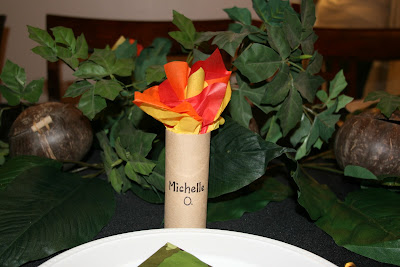 Decor:  Set up tiki torches on the walkway leading up to your door.  If you can get palm tree branches or other shrubbery, this just adds to it.  As guests enter they are given a colored bandanna or strip of fabric to symbolize which team they will play on.  I gave them out as guests arrived alternating colors, so the teams were random, and I wouldn't be accused of stacking my team with good players!  My table was set using a black tablecloth and coconuts as the centerpiece. The coconuts are actually drinking cups I found at Party City which is where I also got the camouflage napkins.  I also added leaves to the centerpiece to add more jungle theme.  My place cards were handmade torches with each guest's name printed on them.  I saved toilet paper rolls and covered them with the paper from brown paper lunch sacks.  I then crumpled red, yellow, and orange tissue paper as a flame.  The bottom of the flame was held together with safety pin.  This gave guests something to grab a hold of when it was time to "extinguish" their flame (see activity section).

Activity:  This party was the winner for Favorite Activity at our Top 5 After 5 party.  Just like the television show Survivor, there were several activities which pitted the red team against the yellow team.  I set the party up to have an elimination after each challenge.  To do this, I put each guest's name on a strip of paper and placed it in the coconut designated for their team.  If the red team won a challenge, I would pull a name out of the coconut designated for the yellow team.  That player would then "extinguish" their torch (yes..that means pull the tissue paper flame down into the toilet paper roll!).  Even though players were eliminated from being the Ultimate Survivor of the evening, everyone still participated in all the challenges. There were a total of 7 challenges:


Challenge #1:  Memory Tray --  large tray with camping/survival items on it.  Give guests a couple minutes to memorize items. Then take the tray away and have them make a list.  Team with highest number wins.

Challenge #3:  Tent Set-Up -- time which team can put up a tent the fastest 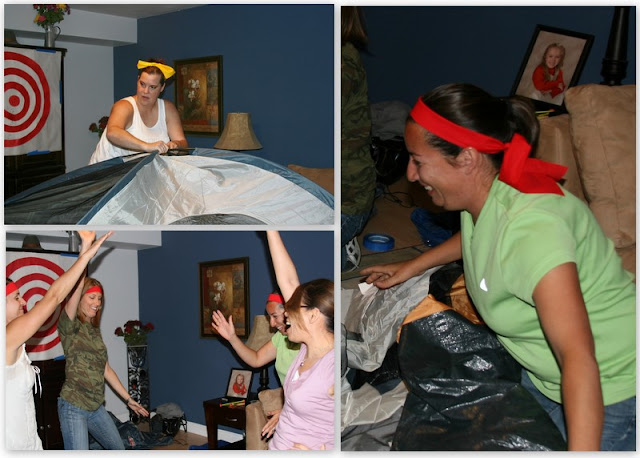 Challenge #4:  Puzzle -- I created two puzzles each with a collage of photos from past monthly dinners.  I just did mine on the computer and printed them on card stock.  It was too much money to have them done professionally.  Team that puts both puzzles together the fastest wins.
Challenge #5: Survivor Guess -- Quiz with clues of survivor movies, tv shows, and books.
Team that has the most correct wins. 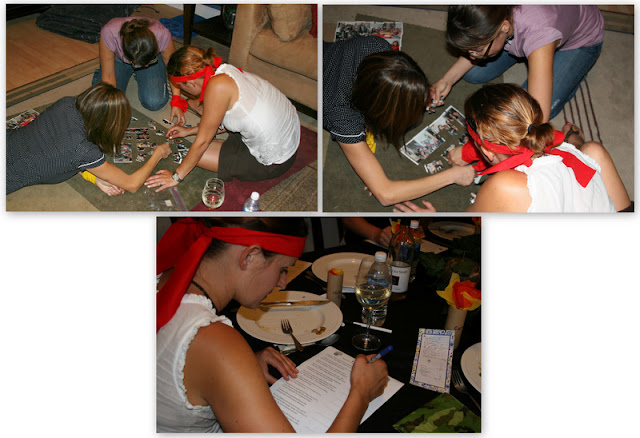 Challenge #6:  Can Tower -- Two members of each team are blindfolded and have to stack empty soda cans into a tower.  The other two members have two marshmallows each & can use these to try to knock down the other team’s tower.  Tallest tower at the end of 2 minutes wins.  This game is SOOOOO fun!!
Challenge #7:  Paper Chain -- Use blindfolds to tie all members wrists to another team members.  Give cut paper strips and tape to each team.  Team that works together to create the longest paper chain
in two minutes wins! 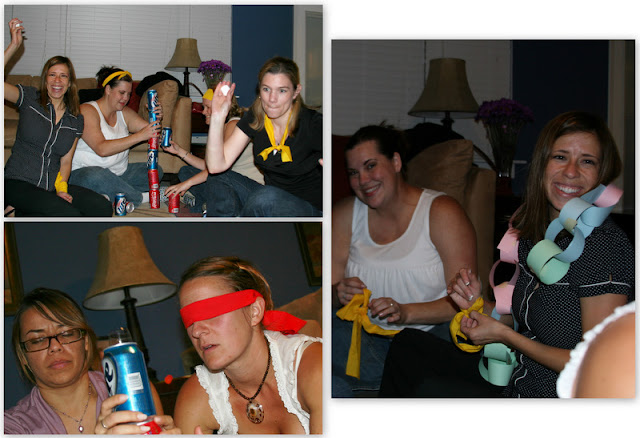 Food:  Unfortunately, this is one of my parties that I cannot remember what my main menu was.  I do, however, remember the appetizer and dessert.  These were the only "bugs" allowed at this Survivor Soiree!! As an appetizer, I served spider crackers. I simply cut green olives into slices for the eyes and created a sandwich with cheese and Ritz crackers.  I then used 8 Chinese noddles to represent the spider legs.  The dessert was also a spider.  I frosted cupcakes with chocolate frosting and made eyes by piping white frosting onto the cupcake.  I used red hots as the eyeballs and cut thin black licorice into strips to use as the 8 legs.  I looked everywhere for thin black licorice and finally found it at Sweet Factory.

This party was so much fun because it was active. It would make a great game night or a fun birthday theme for someone who is outdoorsy.  I have also used some of the game ideas as leadership lessons to play with my high school student leaders.  They are fun, but also involve teamwork and overcoming obstacles.  Definitely one of my favorite dinners that involved an activity!

Posted by InviteandDelight at 12:01 AM

For the challenge#6, pop can tower game, are the 2 members that have the marshmallows blindfolded as well??

You mentioned in the beginning of the post about "extinguishing the flame.". What activity did you do?

After each game, I drew a name out of the losing team's coconut. The person's name on that slip of paper had to extinguish her flame. To do this, they just pulled down on the paper clip inside the toilet paper roll to hide the tissue paper flame.

No. Only the stackers. You could try that, but I think it would make the game super hard!

You are absolutely the best party planner I have ever seen. Such great ideas. I have grandchildren that are the age that they can no be entertained with crafts and childish games. I can't wait to try some of your suggestions on my next gathering. Thank you for your talent.