Walking through Target a month before my daughter Ella's first birthday, my darling angel was on the verge of losing her marbles from being so tired.  I quickly picked up the closest thing I thought would interest her and handed it to her hoping it would buy me the few more minutes I needed to finish my shopping.  That "thing" happened to be a pinwheel, and Ella was captivated.  That 99 cent pinwheel saved the day. Not only that, it provided the inspiration for my daughter's first birthday party...a Pinwheel Party! 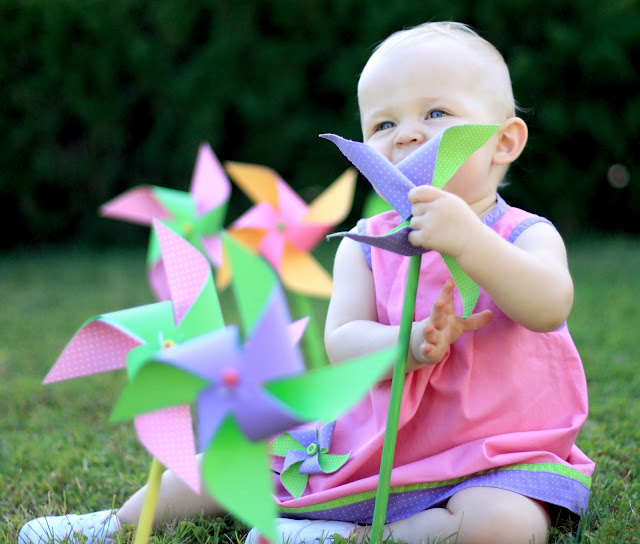 I wanted the theme to be very vibrant, but still have the little girl aspect to it. This is why I decided to make the color scheme pink, yellow, lime green, and a little touch of purple.  Of course this choice made it impossible for me to use the cheap red and blue pinwheels Ella had found at Target, but we'll get to that later. 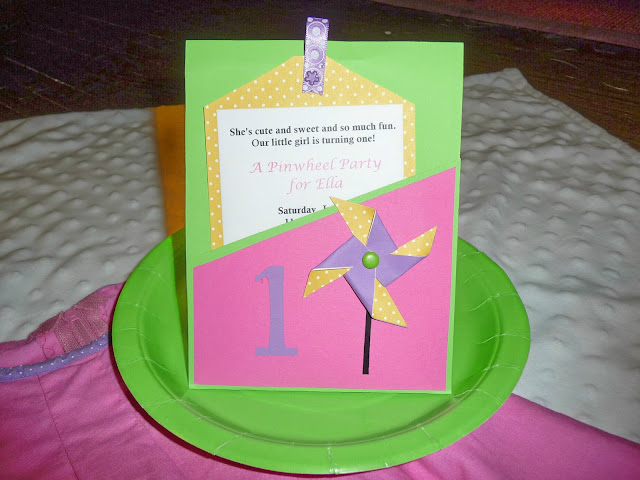 I decided to make my own invitations with cardstock I bought at Michaels and Tall Mouse.  I used solid color paper as well as paper with pocadots.  I folded the paper to make a pocket so the invite details could be pulled out and used a brad to attach a pinwheel I made with cardstock. The live version is much better, but this photo at least gives you the idea. 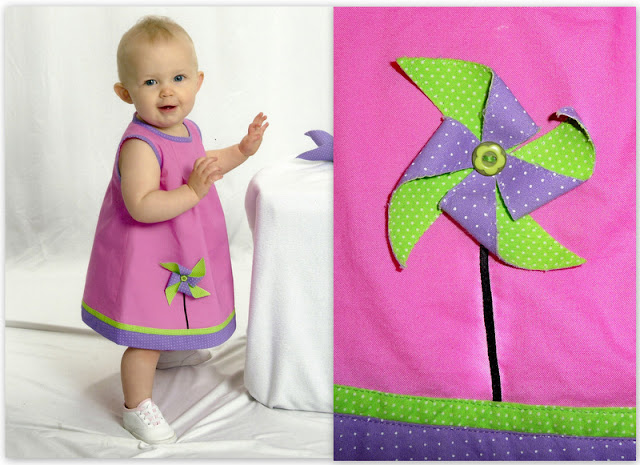 I elicited the expertise of my mom to sew Ella her party dress.  I even found pocadot fabric make the pinwheel on the front. The party was outdoors, so I wanted pinwheels to decorate the lawn and tables. I looked online, but pinwheels were either not my color scheme or just way to expensive for my taste.  I decided to make my own. There are several websites that show you how to make pinwheels with easy instructions.  For mine, I bought 3/8" dowel poles from Michaels which I cut into 12" sections and painted with the colors of the party.  My husband drilled a hole at the top, and I bought a thin dowel pole which I used to hold the pinwheel. A wooded peg/bead (that I painted as well) was attached to the end of that.  While this looked great, the pinwheel did not spin, and I wanted them to be able to twirl at the party. I ended up cutting a straw to fit over thin dowel.  This is slippery enough to enable the paper pinwheel to spin.  I placed these pinwheels in the grass bordering the party as well as on the tables.  I found the vases in my party colors at Michaels as well. 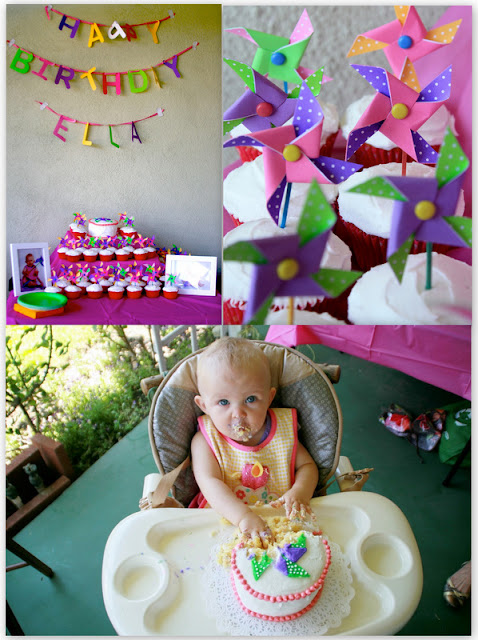 I decided to serve cupcakes and made mini pinwheels in the same colors as the larger ones. I attached the pinwheels to colored toothpicks. I also make a cake for my daughter to dig into (it's tradition right?).  This was a plain white cake, but I designed a pinwheel out of frosting on the top.  Above the cake table is a banner I made using my Cricut.  It was a windy day, so it blew letters around a lot.  If I were to do this again, I would use thicker cardstock and affix it to the ribbon.  For this one I only just hole punched it and fed the ribbon through not thinking about the weather. 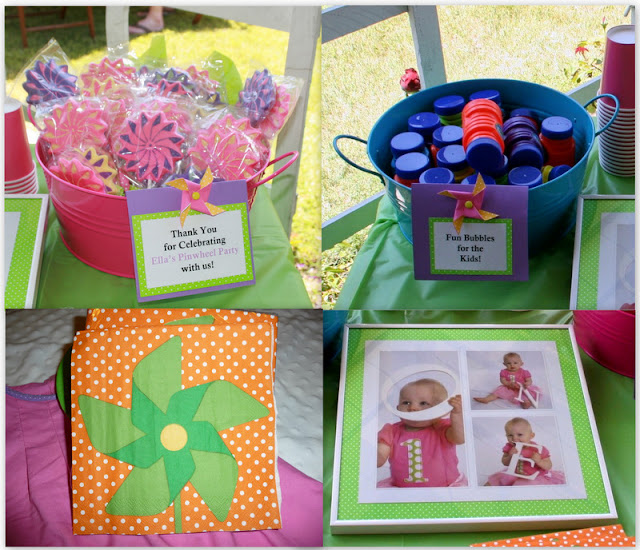 To thank everyone for coming to celebrate with us, I made chocolate pinwheel suckers in the party colors.  Super cute, but very time consuming.  The contrast color I painted on which took a long time. I also had bubbles for the kids to play with at the party.  The pinwheel napkins I randomly found at Target.

This was such a fun birthday theme and although it took time to hand make all the pinwheels, it really did not cost that much. It made a great theme for my little girl. I think it would be a great theme for a baby shower (just change color scheme for a boy) as well.  Maybe with the saying, "Cannot wait for the wind to blow you into our lives" or something cheesy like that.

Posted by InviteandDelight at 10:15 PM

Have you ever thought of being a party organizer? People would pay good money for YOU to organize their party.