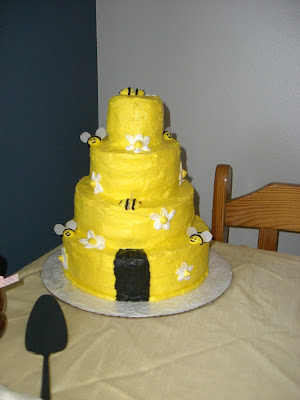 Back in 2008, I hosted a baby shower for my close friend who was having her second little girl. I decided to go with a bumble bee theme and pull in pink as well.  The invitations were simple with bumble bees and pink and yellow paper.  The English teacher in me wanted the wording to rhyme, so this is what I came up with:
What’s all the buzz about?
Wendy’s ba-bee girl is soon to pop out!
We’ll celebrate at my little bee hive
To (hostess’ address here) you’ll drive.
Saturday, May 17th, 2008
At 1:00 pm so don’t be late.
Lunch will be served, so come for the fun
Just RSVP to Carole at (phone number here)
No solo gifts as per mom-to-bee’s request
She’d like a dual stroller from all of us the best.
(Please let me know if you’d like to contribute)
As each guest arrived, I had a guestbook for them to write well wishes in.  I made this out of the same cardstock paper and colors that I had made the invitations.  I did simple daisies as the centerpiece and added sliced lemons to the water to give color and hide the stems.  I also found small wooden bumble bees at Michaels that I added to the flowers. 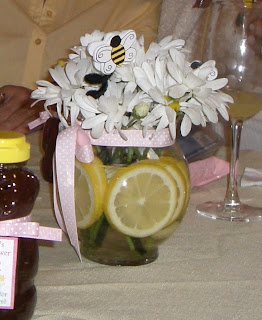 I also had two favors that I placed at each guest's setting.  One was a collection of some of my favorite songs.  Although the outer appearance of the CD was bee-themed, the songs were definitely not!  The second favor was a jar of honey with a cute tag replacing the label.  They had honey bears at the 99 cent store, but I thought they were ugly, so I did pay more and got them at the grocery store. 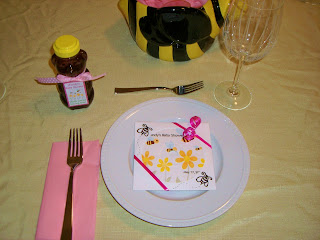 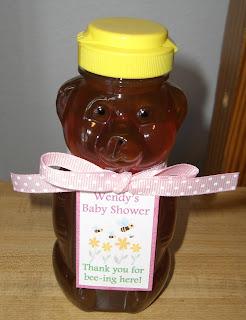 The delight came with dessert. My ultra-talented mother helped me craft an amazing beehive cake. We made 4 round cakes in various sizes and stacked them up on top of each other frosting them with bright yellow frosting (it would probably be smoother with fondant, but I hate the way it tastes).  To make the bees, I just used black frosting to pipe on the stripes, tail, nose and eyes.  Lastly,I cut out the wings from wax paper.  I also added white daisies to the cake to tie it with with my centerpiece flowers. 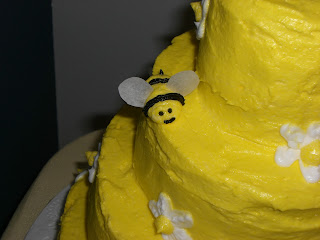 Absolutely nothing about this party theme was difficult except maybe the cake.  And..the hardest part of the cake was transporting it from my mother's house to mine!!  The other details were super easy, but added a lot to the party.  If you are planning to host a ba-bee shower in the future, this is definitely a great theme.

Posted by InviteandDelight at 11:09 PM

Hi Carole! I am planning a baby shower for my friend having her 2nd boy and need some creative ideas...so far I have "She is ready to POP" (popcorn, jalepeno poppers, etc) or "Brunch for Baby." Any creative ideas to go with either theme or another one all together? I love your Ba-Bee one, but she actually did that for me:) Thanks:)

Did you check out my "B" party post? I think this would be great for a baby boy shower. I even have the giant B still if you wanna borrow it. I love the ready to "POP" idea too...would be super cute.

Thinking again about your Brunch for Baby and incorporating the "B" theme into it. How about serving Breakfast Burritos with Bacon? Maybe some Bran and Blueberry muffins. Set out boysenberries, blueberries, and bananas as your fruit. Set up each table with a different B toy for boys-- Blocks, Bat/Balls, Bubblebath, etc. Encourage guests to incorporate "B" into their gifts or cards if possible -- Blue Baby Blankets, Bottles, Burp clothes, clothes that have Baseballs, Bikes, or other B things on them, etc. For a favor: bake B shaped sugar cookies and attach a cute tag to them.