We all remember those high school days with the various clicks on campus and the clothes we wore that we thought were "hip" at the time.  Well, I wanted to bring some fun and craziness of high school back with a High School stereotypes party. I do most of my invites on Evite for monthly dinners, but a fun invite for this one would be to photocopy the guest's photo from their high school yearbook and then list the party details on the back.  I had each guest RSVP with the stereotype they were planning to dress as so I could make sure nothing was repeated (and get my placecards ready). We had everything from a pregnant Catholic school girl to a Chola...watch out ese! 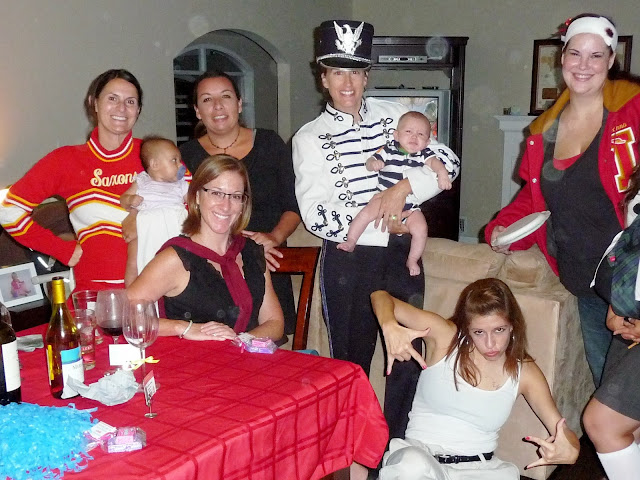 Decor: The decor was simple for this one. I grabbed anything high school related for my centerpiece - a flute, a basketball, graduation cap, whatever you can find laying around your house. I served the food cafeteria-style on a side table and each guest's plate was a styrofoam cafeteria tray (purchased in a pack of 10 at Dollar Tree). I also put graffiti in my bathroom to make it seem like a real H.S. bathroom with cheesy things like Joe + Suzy = Love 4ever and silly things like that.
As a favor, I made goodie bags with mini packs of Nerds candy inside.  The label read "Thanks for bringing your inner NERD to our high school stereotype party."  For the place card, I made fake ID cards from whatever high school the guest actually went to.  I invented an ID number that had something to do with the character they were dressed as -- 2468CHEER, 666GOTH, etc.  The photos I found by Googling the stereotype. I then cut out the face of the appropriate guest and glued it over the face in the original photo.  If you are good with Photoshop you can do this without the glue, but I am not that talented! I scanned this example in...

Food:  When you think cafeteria, you often think tater tots and burgers, but I like these monthly dinners to have more interesting food.  So all I did was think of recipes I could rename into stereotypes.  Here is what I came up with:
Activity:  We played Pictionary with phrases that had to do with high school. I made them up...from Homecoming Queen Sash to Yearbook Editor and Chief.
Some other ideas I didn't do for this one, but you totally could if you had more guests -- Have each guest take a photo with a "yearbook photographer" then put them all together as part of a thank you gift for attending.  This was a fun party and a great one to do in September or anytime during the school year.

Posted by InviteandDelight at 10:22 PM

Email ThisBlogThis!Share to TwitterShare to FacebookShare to Pinterest
Labels: Dress Up Parties, For Laughs, Menus with a Theme, School Themes